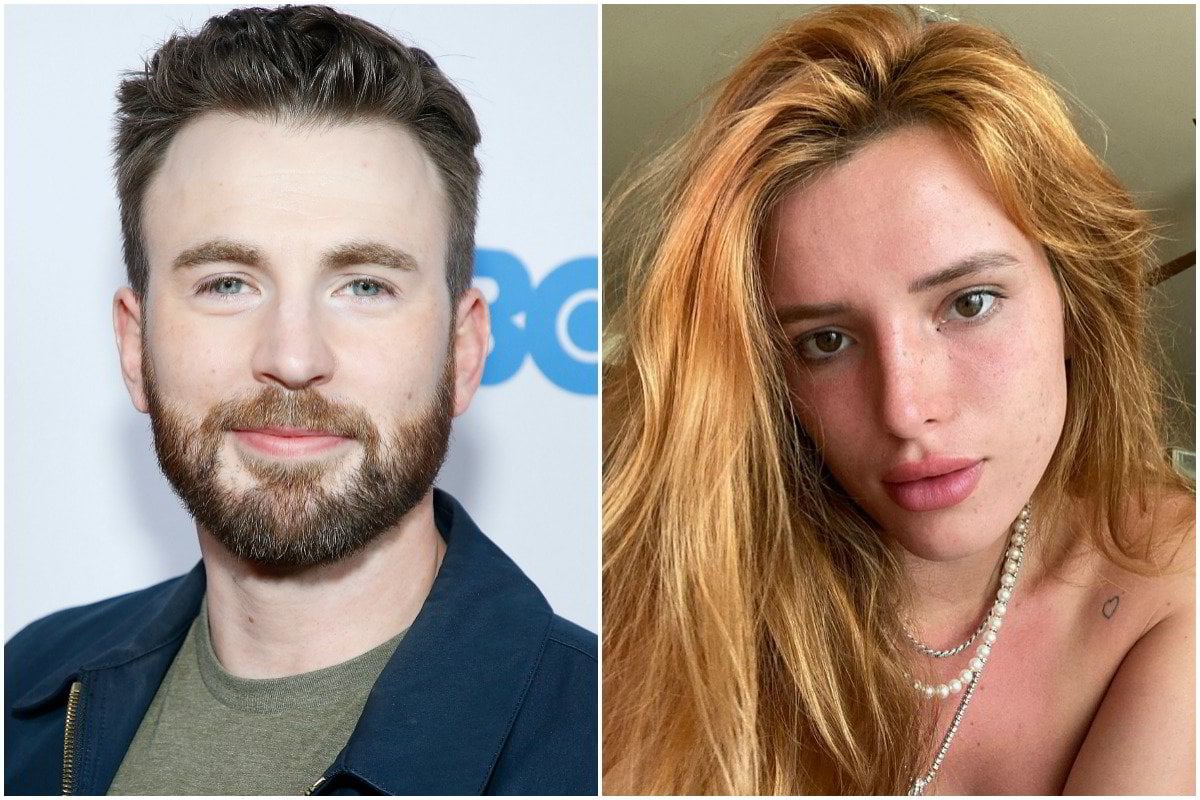 On Saturday, Avengers actor Chris Evans accidentally shared a nude photograph of himself to his 6.3 million followers on Instagram.

After uploading vision of himself playing charades, the video - which was a screen recording - ended and hovered on his camera roll briefly, where a black-and-white photo of a penis was spotted alongside a meme that read "Guard That P*ssy."

Evans' quickly deleted the post, but not before it was screenshotted and shared across the internet. However, over the last six days, Evans' fans have rallied behind him with the goal to "cleanse" Twitter feeds of the nude picture, by uploading photos of him and his dog instead.

They've cited his right to privacy and say sharing the photo might exacerbate his anxiety and depression.

please respect chris evans privacy, he suffers from anxiety and spreading the pictures only make things worse. please delete & don’t share! he deserves privacy. it was a mistake. anyways here’s a picture of chris evans looking cute with a dog pic.twitter.com/tUjCfG1zU1

He's a good guy, he made a mistake and deleted it. Please don't share the #ChrisEvans dick pic. Respect his right to privacy. pic.twitter.com/LriksOoTJb

Chris Evans is trending because of Dodger, look at how cute his dog is 🥺💕 pic.twitter.com/z7OKM13o25

Fellow actor Mark Ruffalo also tweeted: "While Trump is in office there is NOTHING you could possibly do to embarrass yourself."

Across the board, we haven't seen a single negative reaction to Evans' accidental NSFW leak.

Between the light-hearted jokes and the calls to "respect his privacy," Evans has been able to quickly, and relatively quietly, move on.

In fact, he even used the newfound interest in him to urge people to vote in the upcoming US elections, tweeting: "Now that I have your attention... VOTE Nov 3rd."

The media's reaction to Evans' nude photo has also been telling.

In his first TV interview on a live chat with the Tamron Hall Show, Tamron asks Evans: "How you feeling? You've used this to get our eyes on something else."

Evans responds: "That's called turning a frown upside down Tamron. It's been an interesting weekend, lesson learned. Lots of teachable moments, you know things happen it's embarrassing, you got to roll with the punches."

Almost a week in and it seems we're already at the point of relegating this blip to a paragraph on Evans' Wikipedia page, if it even makes it that far.

The same cannot be said for women whose nude photos have been leaked.

"The public respect for Chris Evans’ privacy/feelings is wonderful. Wouldn’t it be nice if it extended to women when this kind of thing happens?" wrote actress Kat Dennings on Twitter.

The public respect for Chris Evans’ privacy/feelings is wonderful. Wouldn’t it be nice if it extended to women when this kind of thing happens?

By way of comparison, let's rewind 15 months to June 2019, when Bella Thorne, a 21-year-old actress known for her roles in Big Love and Disney's Shake It Up, had a comparable "blip".

Except for her, it was a saga.

After she was blackmailed by a hacker, Thorne decided to release her own nude photos into the world.

"Here's the photos he's been threatening me with, in other words here's my boobies," she wrote, alongside a text message chat that included five photos of the young actress topless.

Fuck u and the power u think you have over me. I’m gonna write about this in my next book😡😡😡 pic.twitter.com/0Ep0iXgW51

A quick scroll through the 10,000 replies to her post, you'll find the majority of responses are either sexual replies or statements like: "But why? Why take pictures like this in the first place?"

But it was a segment on The View, a daytime talk show in the US that averages about two million views an episode, that really highlighted the glaring difference between the public reaction to Evans and Thorne.

"If you’re famous, I don’t care how old you are. You don’t take nude pictures of yourself," host Whoopi Goldberg said during the episode. "Once you take that picture, it goes into the Cloud and it’s available to any hacker who wants it, and if you don’t know that in 2019 that this is an issue, I’m sorry. You don’t get to do that."

Video via The View

While Evans was able to thank his fans and move the topic along to politics, Thorne copped the blame for taking the photos. The focus was on why she had the photos in the first place, rather than the behaviour of the man threatening her.

Press after Thorne's incident read: "Whoopi Goldberg was RIGHT to scold Bella Thorne for having naked pics on her phone where a hacker could get them," and "Bella Thorne stands up to Whoopi Goldberg after criticism to nude photo hack."

In an emotional Instagram story posted at the time, a distressed Thorne defended herself, calling Goldberg's comments "disgusting" and shared her offence with the segment in a lengthy statement. 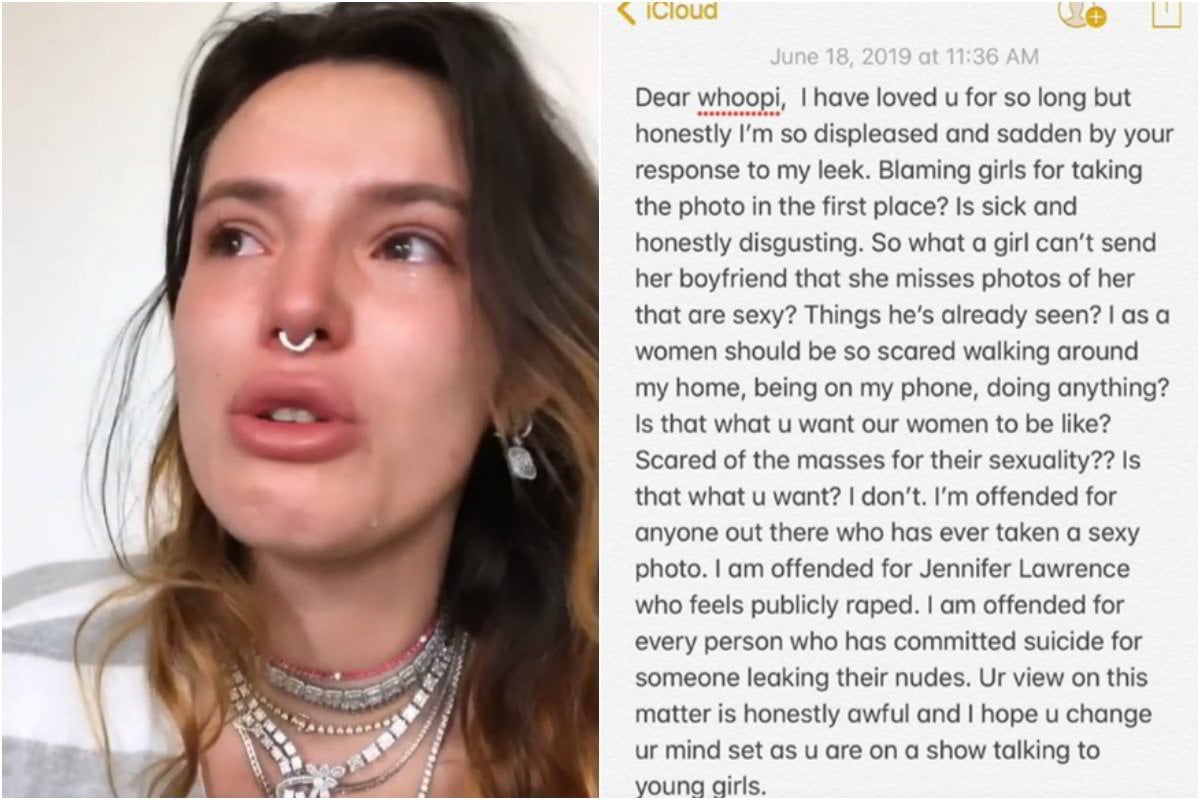 Just a few years prior, Vanessa Hudgens and Jennifer Lawrence received widespread condemnation and slut-shaming in 2007 and 2014 respectively, for their nude photo leaks.

Even though it was hackers who released their private photos, the commentary about the women boiled down to if you're "dumb" enough to take nude photos or videos in the first place, you aren't deserving of compassion - or privacy.

Hudgens apologised and expressed her "regret [for] having ever taken these photos", with Disney following up with a statement hoping the High School Musical star had "learned a valuable lesson for what was a lapse in judgement."

Lawrence refused demands to say sorry, telling Vanity Fair: "It’s my body, and it should be my choice, and the fact that it is not my choice is absolutely disgusting."

But op-eds and commentary praising "how far we've come" when comparing the reactions to Evans this week, need only look back 15 months to realise, the male and female experience in this instance simply can't be compared.

While the photos of Lawrence and Hudgens, and more recently Thorne, were free game for opinion, Evans' photo isn't up for debate at all.

Because he, it seems, is more deserving of privacy.