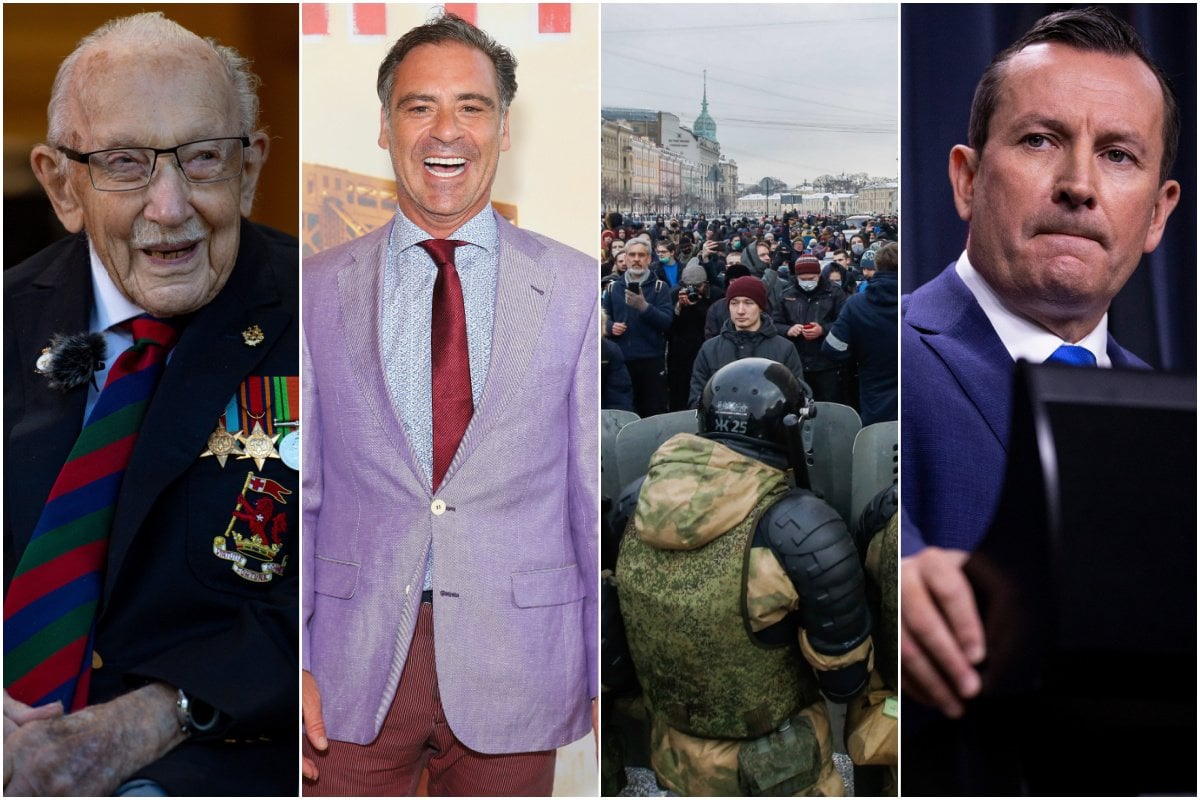 Captain Tom, 100, in hospital with virus.

British fundraiser Captain Tom Moore, who was knighted by the Queen after raising millions of pounds for charity by walking laps of his garden in last year's lockdown, has been admitted to hospital after testing positive for coronavirus.

The 100-year-old World War Two veteran caught the public's imagination in April with his laps, raising $A59 million for Britain's National Health Service.

He broke two Guinness world records and was knighted at Windsor Castle but he didn't rest on his laurels, going on to score a No.1 single with his version of You'll Never Walk Alone and write an autobiography.

Captain Sir Tom Moore has been admitted to hospital after testing positive for Covid-19.https://t.co/lkhOKiz66L

His daughter Hannah on Sunday said Sir Tom was in hospital after contracting COVID-19.

"I wanted to update everybody that today ... my father was admitted to hospital,"  she said on Twitter.

"Over the last few weeks he was being treated for pneumonia and last week tested positive for COVID-19.

"He was at home with us until today when he needed additional help with his breathing. He is being treated in a ward, although he is not in ICU (intensive care unit)," she said.

Hannah said Sir Tom had been receiving "remarkable" medical care in the past few weeks.

She said the family knew the staff at Bedford Hospital in the English town of Bedford would do all they could to make him comfortable and "hopefully return home as soon as possible".

TV presenter and game show host Andrew O'Keefe has been charged over an alleged domestic assault on his partner in the early hours of Sunday morning.

The 49-year-old is accused of assaulting his rumoured partner Sydney-based doctor Orly Lavee at an apartment in Randwick, Sydney just before 1am.

He was arrested on a nearby street at 3:30am and granted bail until he faces Waverley Court on Thursday.

O'Keefe, a former lawyer and son of ex-NSW Supreme Court Justice Barry O'Keefe, was one of the founding members of domestic violence charity the White Ribbon Foundation.

Swathes of Western Australians have completed their first night of lockdown, triggered after a hotel quarantine security guard attended more than a dozen venues while infected with COVID-19.

From 6pm on Sunday, metropolitan Perth, the Peel region and the South West region entered lock down, which will last until 6pm on Friday.

All residents must stay at home unless shopping for essentials, attending to medical or healthcare needs, exercising within their neighbourhood or working if unable to do so remotely.

Premier Mark McGowan has pleaded with West Australians not to panic buy, but that has fallen on deaf ears. #covid19WA | @aristway27 pic.twitter.com/QEd1Jognlt

Schools which were due to resume on Monday will remain closed for another week.

WA had gone nearly 10 months without a virus case in the WA community before the breach.

Authorities believe the man in his 20s, who worked at the Sheraton Four Points hotel in Perth's CBD, has probably contracted the highly contagious UK variant of the virus and have urged anyone to get tested if they have symptoms.

The man had worked two 12-hour shifts on January 26 and 27 on the same floor as a person infected with the highly contagious UK variant of the virus.

Genomic testing confirming the source of his infection will not be available until Tuesday morning.

Other states moved quick to close borders or restrict travel.

South Australia slammed its border shut to all of WA on Sunday night.

People travelling to NSW from the affected areas must take a COVID-19 test and stay at home.

COVID vaccine program gets $1.9b boost.

Scott Morrison says vaccinating 26 million Australians by the end of the year will be one of the nation's largest-ever logistical exercises.

The Prime Minister will use a speech at the National Press Club on Monday to lay out the government's plan to complete the vaccination program by the end of the year.

He will announce an extra $1.9 billion - taking the vaccine program to $6.3 billion - for the workforce involved in the roll out of the jabs through GPs, pharmacies and thousands of other approved centres.

Pharmacies around Australia are being invited to join the nation-wide effort to administer the COVID-19 vaccine to millions of Australians over the coming months.

An expression of interest process will commence on February 1.

Mr Morrison will say CSL's Melbourne manufacturing plant alone should produce enough of the AstraZeneca vaccine to cover the nation.

But the recently approved Pfizer vaccine will still be the first rolled out from late February.

Under the vaccine strategy all Australians will be offered the opportunity to be vaccinated by October 2021.

Involved in the roll out will be the Royal Australian College of General Practitioners, Australian Medical Association and logistics companies including DHL and Linfox, with GPs and community pharmacies administering the jab.

Just hours after barring travellers from much of Western Australia from entering the state, Queensland is finally open to Greater Sydney once again.

Queensland closed the border to 35 local government areas in Greater Sydney, Wollongong and the Central Coast in the midst of December's COVID-19 outbreak, causing chaos for travellers before Christmas.

The first travellers from Sydney will arrive in Queensland this morning after the border reopened overnight. #9News pic.twitter.com/wdhdR8S3EJ

But with NSW now going 14 days without a single local virus case, Queensland's border checkpoints are being dismantled from Monday.

When announcing restrictions would lift on Thursday, Premier Annastacia Palaszczuk acknowledged the border closure had been "a really, really long haul, and it has been tough on everybody".

Queensland has barred NSW residents from entering the state three separate times since the pandemic began.

The travel bubble from New Zealand to Australia has been reopened after health authorities on both sides of the Tasman were satisfied cases of a highly infectious variant of COVID-19 were contained to three people.

Acting Chief Medical Officer Michael Kidd recommended to the Australian government that the pause in flights from NZ that started last Monday did not need to be extended any further.

Prof Kidd recommended pre-and post-flight screening be implemented for the next ten days, as there is still a small risk of further cases being detected.

"The Commonwealth has accepted this advice, meaning green zone flights will commence this afternoon," Health Minister Greg Hunt said in a statement on Sunday.

For people to travel from NZ to Australia, they must also have been in NZ for 14 days and have been in quarantine as necessary.

The decision came as Australia reported another day of zero locally acquired cases.

Riot police have broken up protests across Russia, detaining more than 4500 people who had braved the bitter cold and the threat of prosecution to demand the release of Kremlin critic Alexei Navalny.

In a massive show of force, police imposed a sweeping security lockdown in the heart of Moscow, sealing off streets to pedestrians near the Kremlin, closing train stations and deploying hundreds of riot police as snow fell.

Wife of Putin critic Alexei Navalny is one of nearly 4,500 protesters arrested at nationwide protests across Russia https://t.co/2yDNhHmuRD

At one point, a column of protesters marched towards the prison in northern Moscow where Navalny is being held, chanting "Let him go!". In another scene, a crowd raised its hands above its heads in front of a row of riot police and chanted "we're not your enemies".

Navalny, 44, was arrested after returning to Moscow from Germany where he had been recovering from a nerve agent poisoning in Russia. He accuses President Vladimir Putin of ordering his murder, which the Kremlin denies.

At least 4567 people were detained nationwide, including 1450 in Moscow, according to OVD-Info, a protest monitoring group.

Pope Francis has instituted a day in the Roman Catholic Church to honour grandparents and elderly people once a year and underscore their importance to society.

Francis made the surprise announcement of "World Day for Grandparents and the Elderly" at his Sunday noon address, saying it would be marked on the fourth Sunday of July each year in Catholic communities around the world.

#PopeFrancis institutes a Church-wide celebration of a World Day for Grandparents and the Elderly, to be held on the fourth Sunday of July.https://t.co/MdVZnuAqEq

The worldwide Church holds special events and religious services on those days to draw attention to the needs and attributes of the groups.

Francis, 84, has often called on society to cherish the elderly as a source of wisdom and experience and he has lamented a "throwaway culture" that puts them aside because they are no longer productive.

Thunberg, Trump, WHO among Nobel nominees.

Russian dissident Alexei Navalny, the World Health Organization and climate campaigner Greta Thunberg are among those nominated for this year's Nobel Peace Prize.

All three are backed by Norwegian politicians who have a track record of picking the winner, while outsiders for the prestigious award include former US President Donald Trump.

Nominations, which close on Sunday, do not imply an endorsement from the Nobel committee.

The 2021 laureate will be announced in October.

- Former president Donald Trump has reportedly parted ways with his lead impeachment lawyers just over a week before his Senate trial is set to begin.

- A World Health Organisation team investigating the origins of COVID-19 have visited the seafood market where the virus was originally detected amid heavy security.

- Two students have been arrested in Turkey on charges of inciting hatred and insulting religious values over a poster depicting Islam's most sacred site with LGBT flags.

- Thousands of Orthodox Jews have attended the funeral of an influential rabbi in Jerusalem in defiance of a third lockdown in Israel.

- At least 17 people have been killed in an attack on a hotel in Somalia's capital city by jihhadist rebels.