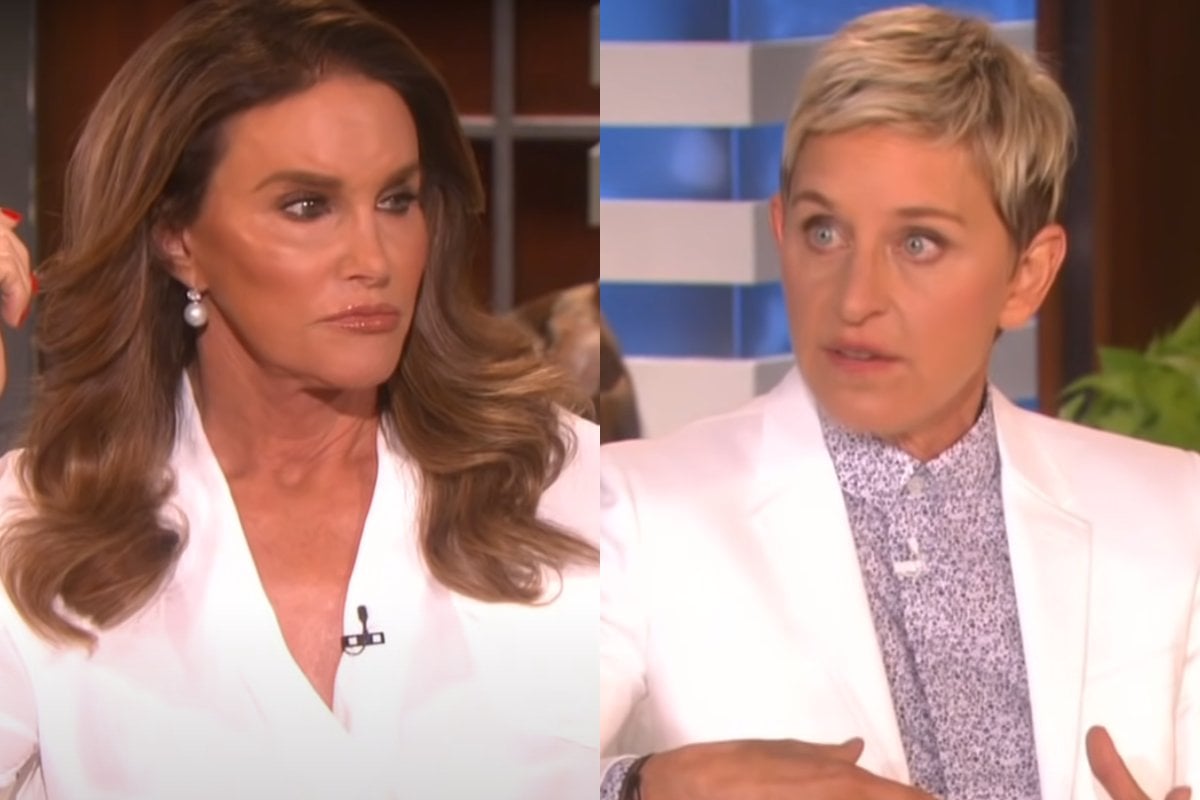 Caitlyn Jenner has opened up about her six-year feud with Ellen DeGeneres in a deleted scene from Big Brother VIP Australia.

In 2015, shortly after coming out as transgender, Jenner appeared on The Ellen DeGeneres Show.

During the appearance, DeGeneres asked Jenner for her thoughts on same-sex marriage.

In response, Jenner shared that she had always been a "traditionalist", adding: "If that word 'marriage' is really, really that important to you, then I can go with it."

Watch a clip from Caitlyn Jenner's appearance on The Ellen DeGeneres Show. Post continues below.

"I’m older than most people in the audience," she said.

"I kind of like tradition, and it’s always been a man and a woman, and I’m thinking, 'I don’t quite get it.'"

Jenner's non-committal answer upset the LGBTQ+ community, and later that year, she released a blog post where she came out in support of same-sex marriage writing that "everyone should be able to marry the person they love".

Jenner later reflected on the interview on Big Brother VIP, explaining that she and DeGeneres feuded in the media for months afterward.

"At first it was the normal questions, then she asked me this question [about] gay marriage," she told the other housemates in a clip obtained by the Daily Mail.

"So I tried to do my best, and I thought I did okay, but looking back on it I could've handled a couple of things a little bit differently, because I didn't think she'd respond the way she did.

"Then she says to me, 'Well it sounds like you're really not for it', and I said, 'No, I just said I'm for gay marriage'.

"The next week, she goes on Howard Stern's radio show and says I was against gay marriage, and absolutely burnt my ass. And so, in the media, I got really tough on her."

Jenner went on to accuse DeGeneres of using her family for views, and even considered asking Kris Jenner to "ban" the kids from appearing on the show.

"I thought, 'Maybe I should call Kris [Jenner] and say, 'Kris, why don’t you just ban any of the kids being on Ellen,' but I didn’t," she said.

"I thought, 'I don’t want to get involved in that. Let them do their thing.'"

It's not the only thing Jenner opened up about while appearing on Big Brother VIP.

During her time on the show, the 72-year-old opened up about her relationship with Kris Jenner.

While talking to Bernard Curry, who asked if the pair were still "friendly", Jenner said that it was an "interesting" word to use. (The former couple separated in 2013 after 22 years of marriage, and share two daughters: Kendall and Kylie).

"I would say from my standpoint, our relationship is not as good as it should be. I don't have any hard feelings toward her. We did a great job of this and that. Yeah, I wish it was closer, but it's not," Jenner explained.

"Our relationship is okay. I think it could be better just because of the kids. It's always the way when you have that. It's all about how the mother and father, how they get along together. Is it easy? Is it good? Do they see each other? Is there any tension?"