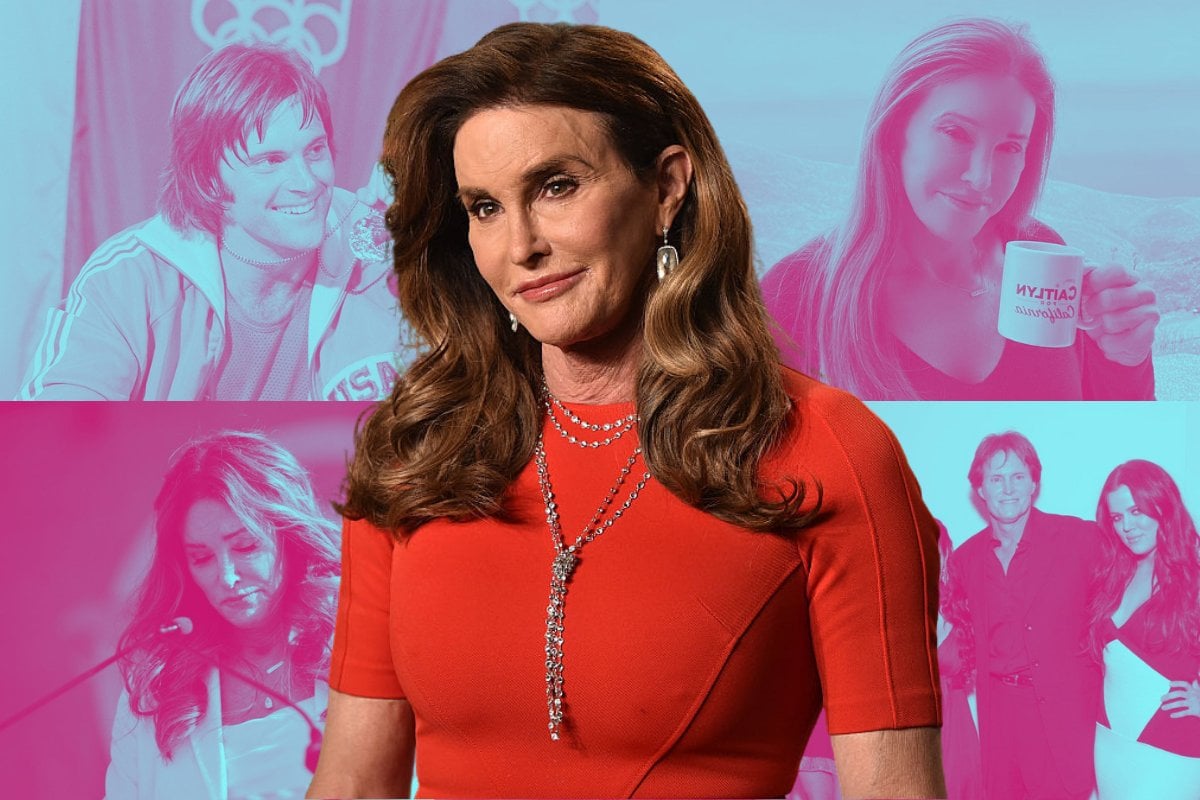 Caitlyn Jenner was in the fifth grade when she realised she had a gift for sports. Her gym teacher made everyone go for a run, and Caitlyn was the fastest in the school.

For a kid who was dyslexic and had identity issues, it was a life-changing moment.

“If I would have been average, good student, no identity issues, I wouldn’t have needed sports,” Jenner says in Netflix sports documentary series Untold. “But for me, I needed it because I was different. Nobody knew it, but down in my soul, I was different. So I built this Bruce character.”

Watch: The promo for E!'s docuseries 'I Am Cait.' Post continues below.

At the time, Jenner was sneaking into her mum’s closet, dressing in her clothes and putting on her lipstick, but not sure why she was doing it.

“I always wondered, ‘Am I doing this for, like, a high? Is that the excitement? Am I just, like, a risk taker?’” she remembers thinking.

Jenner’s gift for sports won her a football scholarship to Graceland College in Iowa.

Chrystie Crownover was also starting at Graceland College, and she remembers “Bruce” running up to her on her first day and asking her to go to the movies.

“He was really funny, and he didn’t know how handsome he was,” she says in Untold.

“He was just the boy next door.”

Jenner’s promising football career was abruptly halted by a knee injury. But a coach convinced her to give decathlon a try.

At the age of 22, she qualified for the 1972 Munich Olympics and finished tenth.

For the next four years, her only goal was to win gold in the decathlon at the 1976 Montreal Olympics. She trained for six to eight hours a day, every day.

“I had this war going on inside me,” Jenner remembers.

“‘Are you really trans? Are you gay?’ I didn’t know anything about that, so you just keep your mouth shut.”

For her, the single-minded focus on the decathlon was a way “to prove my masculinity”.

“If I can win an Olympic gold medal, maybe I can prove these issues don’t even exist.”

Jenner married Crownover, who supported them both by working as a flight attendant.

Crownover, now Chrystie Scott, told Good Morning America in 2015 that Jenner told her early on in their marriage that she had to share “this deep, dark secret”.

“He told me he always wanted to be a woman and, understandably, I was speechless. I didn’t really know what to say.

Jenner went on to achieve her dream of winning Olympic gold. She tells Untold it was Bruce, not Caitlyn, who won.

“I do honour what he was able to do and I always call it Bruce because Bruce did do that.”

After the Olympic victory, everything changed for Jenner.

Offers came pouring in. She did all the talk shows. She became the face of Wheaties, “the breakfast of champions”. She was asked to audition for the role of Superman, a role that eventually went to Christopher Reeve. Jenner told Variety in 2018 she was relieved she didn’t win the superhero role.

“It was just too much for me. I would have gone down as the most macho guy in the world, and that’s not me. It’s not even close to being me.”

Jenner had been loaned a Porsche by a car dealership and let her younger brother Burt borrow it. Burt took a teenage girl for a drive and took a turn too fast.

The Porsche hit a tree and then a rock wall. The girl died instantly and Burt was critically injured, dying soon afterwards.

“I have struggled with guilt," Jenner wrote in her memoir The Secrets Of My Life.

Jenner and her wife had a baby son and called him Burt.

In the years that followed, Jenner scored more TV and movie roles, including a major role in Can’t Stop The Music, which saw her nominated for Worst Actor in the first-ever Golden Raspberry Awards.

She also appeared as a cop in CHiPs and in a special episode of Silver Spoons about dyslexia.

But Jenner’s marriage was failing. Her wife was pregnant with their second child, daughter Cassandra (Casey), when they split.

In 1981 Jenner married Linda Thompson, an actress and award-winning songwriter who had dated Elvis Presley for four years. They had two sons, Brandon and Brody.

While they were married, Jenner told Thompson that she was transgender. It ultimately led to them splitting up.

"I questioned everything about myself," Thompson told ET in 2016. "It was devastating. I was unearthed. It was a crazy time."

Jenner sought therapy and decided to transition. She told her ex-wife Scott what she was doing. Son Burt remembers Jenner taking hormone pills and having electrolysis to get rid of the beard. But in the end, she couldn’t go through with it.

“I tried to transition, but I was too scared,” Jenner tells Untold.

Then Jenner met Kris Kardashian, who was already mum to Kourtney, Kim, Khloe and Rob. They married in 1991.

Jenner decided if she couldn’t transition, she would “just be a good Bruce”.

The couple had two more kids, Kendall and Kylie. Jenner loved parenthood. Over the years, she continued “experimenting”, and would cross-dress in private.

After 22 years of marriage – the last six of them lived in the public glare of Keeping Up With The Kardashians – the couple split. It was then that Jenner finally transitioned.

"I look at it this way – Bruce always telling a lie. He’s lived a lie his whole life about who he is. And I can’t do that any longer."

Later that year, ex-wife Kris told ET that the separation was "the most passive-aggressive thing" she’d ever experienced. She said she knew Jenner had been taking hormones before they met, but claimed she was kept in the dark about Jenner wanting to transition.

"Why would you want to be married and have kids if this is what you wanted since you were a little boy?" she asked. "Why would you not explain this all to me?”

Jenner scored her own reality series, I Am Cait, and was named as one of Glamour magazine’s “women of the year”, and received the Arthur Ashe Courage Award.

Over the next few months, Jenner is set to be in the public eye more than ever, with an appearance on Australia’s Big Brother VIP, as well as her campaign to become governor of California.

For now, Untold is proving eye-opening viewing, even to Jenner’s stepdaughter Kim Kardashian West, who posted about it on her Instagram Story on Sunday.