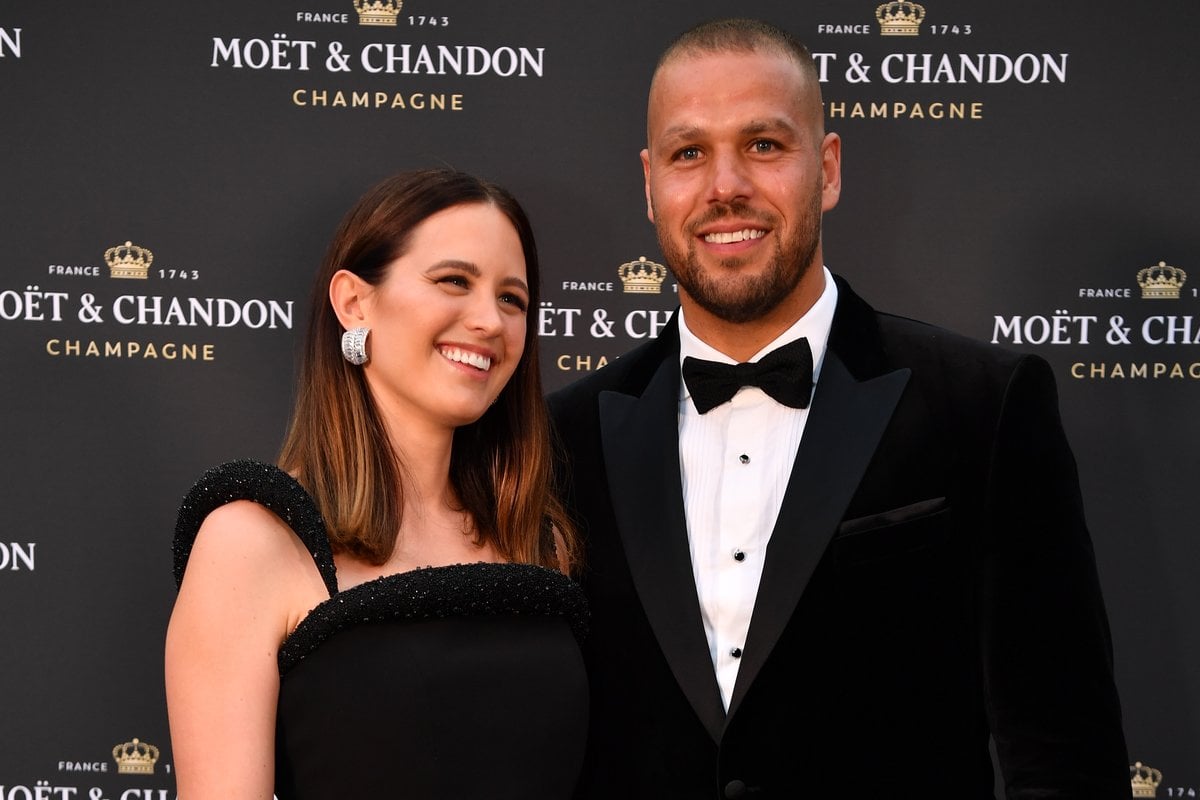 Jesinta Franklin (née Campbell) and her husband Lane 'Buddy' Franklin have been an iconic couple in Australia for quite some time now.

Jesinta, a former Miss Universe Australia winner and Buddy, an AFL player for the Sydney Swans, have also welcomed two children in the last few years.

But amid their very public profiles, their private life has remained exactly that - private.

So after Buddy's 1000th career goal kick over the weekend, here's what we know about the couple, including how they met, the challenges they've faced, and how they decided on their parenting style.

Jesinta and Buddy first met in 2013 when they were both in their early 20s.

"He got my number off someone, and then he just started messaging me. And I was like, 'Um, I'm not dating at the moment. I'm dating my career'," she told Beauticate in 2017.

"Cringe! Oh my God, I can't believe I said that. Back then, as soon as I came back from competing at Miss Universe, I hit the ground and the years following were insanely busy. Weekends were non-existent, and I never took any holidays. I was so busy I couldn't imagine fitting in any dating."

Fast forward a few years, and they went on their first date.

The couple later became engaged in December 2014, before getting married in an intimate ceremony with their immediate family and close friends in a private garden in New South Wales' Blue Mountains in November 2016.

Speaking about the highlight of their wedding to Vogue Australia, Jesinta said her first dance was a particularly special moment.

"I remember that vividly. The song that played meant a lot to Bud and me and it felt like it was just us in the room," she shared.

"We didn't have dance lessons; we literally just held each other and swayed. It was really moving and I'll never forget that feeling. There was nothing contrived, it was all relaxed."

Almost three years after their wedding, the couple announced they were expecting their first child. But the pregnancy announcement also came with stories of previous miscarriages.

"In the early days, [pregnancy] was so stressful, just because I didn't know what was going to happen. This is my fourth pregnancy and I still don't have a baby, so there was a lot of anxiety in the first few months," Jesinta said at the time to Mamamia.

"Every twinge, every feeling, everything made me worry and overthink. I lost a little bit of my innocence, over the last two-and-a-half years: that positive outlook. I had to protect myself," she continued.

"You don't want to start to envision a life with this baby in case, you know, this baby might not be in your life. I really wanted to wait to announce our news at 20 weeks when you have the full anatomy scan, but the media had already gotten a hold of it."

In late February 2020, the couple welcomed their daughter, Tullulah Franklin, who they were both "absolutely besotted" with.

A year later, Jesinta and Buddy welcomed their son Rocky.

Just like all parents, the parameters surrounding technology and kids has also been an important discussion between Jestina and Buddy.

"It's harder and harder now with technology and the digital world, and thinking about the media and how much we expose our children," Jesinta previously told Mamamia.

"I think it's going to be hard to parent in this day and age. Then, on the flip side, one weekend, [Buddy and I] were staying in this baller [incredible] villa, and I turned to my husband and said, 'In one generation, look at our upbringing compared to how our child is going to be raised... how are we going to navigate this with our children?'"

Buddy and Jesinta have also struggled with keeping their children out of the spotlight. The couple have chosen to keep their kids' faces hidden on social media, but navigating the intrusions of the paparazzi is a whole other kettle of fish.

While pregnant, Jesinta also felt uncomfortable being photographed without her knowledge or permission.

"It's certainly different and sometimes confronting being in front of cameras when there are so many changes happening to my body. I feel quite outside of my body and uncomfortable in ways," she shared.

Another thing that Jesinta and Buddy have expressed is their passion for promoting Indigenous voices and recognition, especially considering Buddy is a Noongar-Whadjuk man.

As Jesinta said to Marie Claire: "I've never been judged for the colour of my skin, my culture, where I was born or who my parents are. It's not my lived experience, but it is Buddy's and his mum's and sisters'."

She continued: "Obviously, I'm guided by Buddy, but I've also taken the initiative to educate myself so I can be the best mum to our First Nations babies and the best ally I can be. I feel like I have a big responsibility to ensure my kids can connect to culture and can continue to share their history and be the storytellers for the next generation."

Unfortunately, like many Indigenous sports people, Buddy has experienced racism, including being the subject of racial vilification from the crowd.

But Buddy has proved time and time again he's one of the greatest in the game, both on and off the field.

This week, he kicked his 1000th career goal - something that will be etched in the memory of footy fans forever. Thousands of fans streamed onto the Sydney Cricket Ground after his goal sailed through. It was a magical moment, and a player reaching the 1000 mark is momentous.

"I haven't had too much time to reflect on it just yet but obviously it was a significant moment," he told Fox Sports.

"I absolutely loved it. I wanted to get it (reach the milestone) done as soon as possible. But it was perfect timing to get it done here at the SCG and then to have my family across from America, Adelaide, and Perth. It was such a special moment to have those people that have been through everything with me."

Jesinta and the two kids were also front and centre, celebrating the win with Buddy.

Speaking about the milestone, Jesinta wrote on Instagram: "Memories we will cherish forever. What a weekend. Friends and family made an incredible effort the last two weeks to be in Sydney for Bud to celebrate him kicking 1000 career goals. Whilst not everyone could make it, the love and support from family and friends near and far has been overwhelming, we are just so grateful."

She added that Buddy's 1000th goal was "a true testament to the hard work" he has undertaken.

"Being able to celebrate that with family was such an amazing moment. Love to everyone. I am just so proud. I am finally going to have a champagne!"