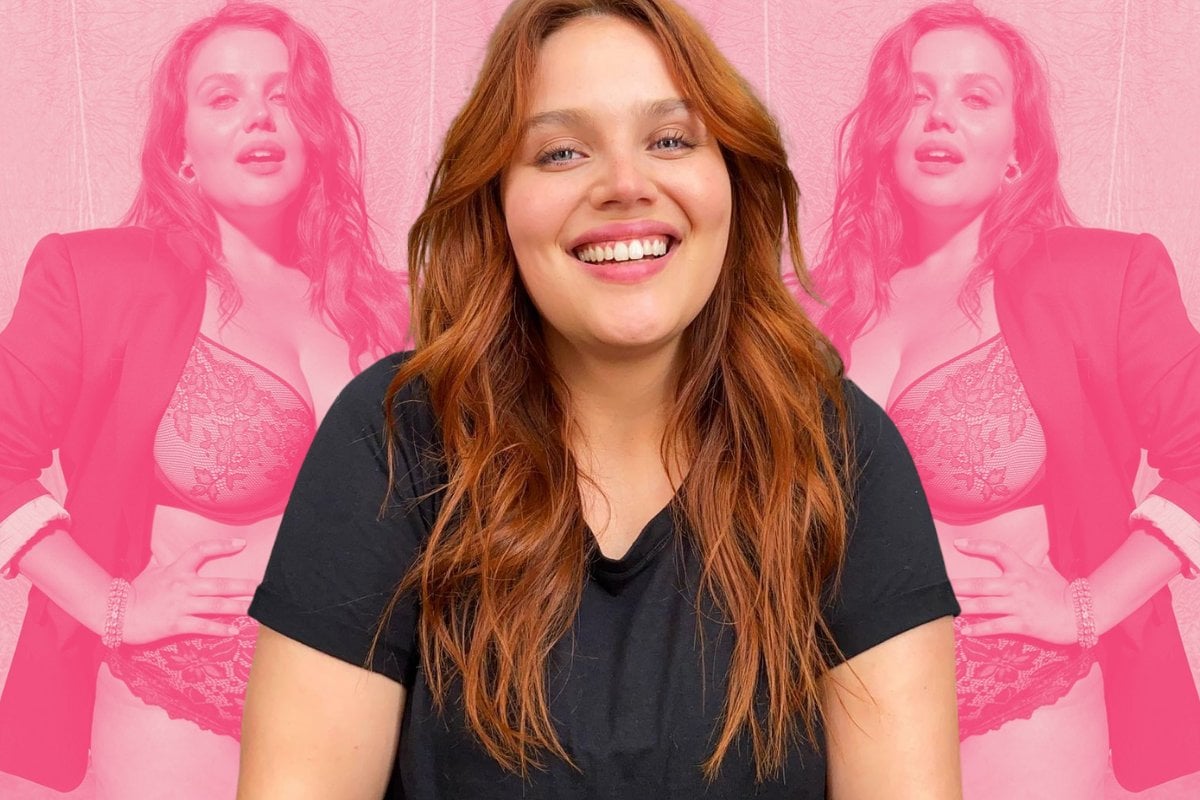 Bruna Lapinskas is changing the face - and body - of fashion.

The Brazilian-born, Australian-based curve model and Soulara brand ambassador currently works with major Australian retailers including Bras N Things, Forever New and Cotton On. But before her growing success in Australia, her options were limited back home.

Side note... here are things you never say in 2021. Post continues after video.

Lapinskas started modelling in Brazil when she was 15, in an environment that didn't cater to her body shape.

"When I had my two jobs as a model, I was modelling for my mum's age," she told Mamamia.

"Nowadays we have 15-year-old girls working with brands that embrace their curves and embrace their age, which I didn't have back there. I was wearing grown woman clothes," she said.

"It was hard to feel comfortable. You want to feel pretty and young but that type of style [made for teenagers] wouldn't fit my body because I have big boobs and apparently at 15 years old, you couldn't have boobs."

In 2018, after receiving a phone call from a photographer asking her to appear in a campaign in Bali, Lapinskas booked a ticket on a whim.

"She [the photographer] took some photos and said 'take them to an agency'. And I was like 'oh no, I don't want to do this again'," Lapinskas said, reflecting on negative past experiences.

While one agency came back and said she was too short for them, curve modelling agency Bella Management took her on immediately. Within a few months, she landed her first Australian gig.

"When I was 15, I barely had options for myself and now it's ridiculous how many options I have," she said.

When asked about her thoughts on the term plus size, Lapinskas said she embraces it.

"It's complicated because I grew up in this world where it was hard for people to understand that my body wouldn't work as a size eight or size six. So for me, I like the term plus size because it is literally who I am. This is how I look, these are my genetics," she said.

"Even though I wish the brands wouldn't separate sizes in store, nowadays it's easy to identify myself in store when [I see the label] plus size," she elaborated.

"But at the same time, I think in this industry, we've got a long way to go before we're called one size."

Despite working with some of Australia's biggest fashion retailers, Lapinskas says the industry isn't nearly as progressive as it could be. That was highlighted earlier this year, when Australian Fashion Week lacked the kind of diversity you might expect to see in 2021.

Read: "I didn’t see my size on the runway at Fashion Week. I’m angry, and I’m not the only one."

"We're getting there. It's very slow, but I feel that there's a lot to come," she said.

"With Australian Fashion Week, unfortunately we didn't see as much as we could've... but brands like Pretty Little Thing and Boohoo, their catwalks, [they're showing] what diversity is - the same style for all different bodies. It's not one style for straight size and a totally different style for plus size," she said.

Not only is the Australian fashion industry not representing enough diverse women, but they aren't catering to all sizes either.

"Something we talk about a lot is how brands call [themselves] diverse but they don't extend their size range," Lapinskas said. "Brands say they offer size 26-28, but when you go in store, you can just see up to 14. Why?"

"Stick with what you say. If you're diverse, have it in store," she said.

While she waits for the fashion industry to change, albeit slowly, Lapinskas uses social media to share her work and be unapologetically herself. That includes photos of her naked body, embracing her curves and cellulite.

"People say, 'why do you post [those] photos?' Because this is who I am," she said. "I have my butt full of cellulite and I'm not *not* posting a photo because because of that. I'm going to post even more."

"I like to show [my chest], I like to show my legs, because I wasn't able to love myself when I was younger. I needed to learn how to do it in a community that didn't understand plus size. I was always called fat or overweight," she said.