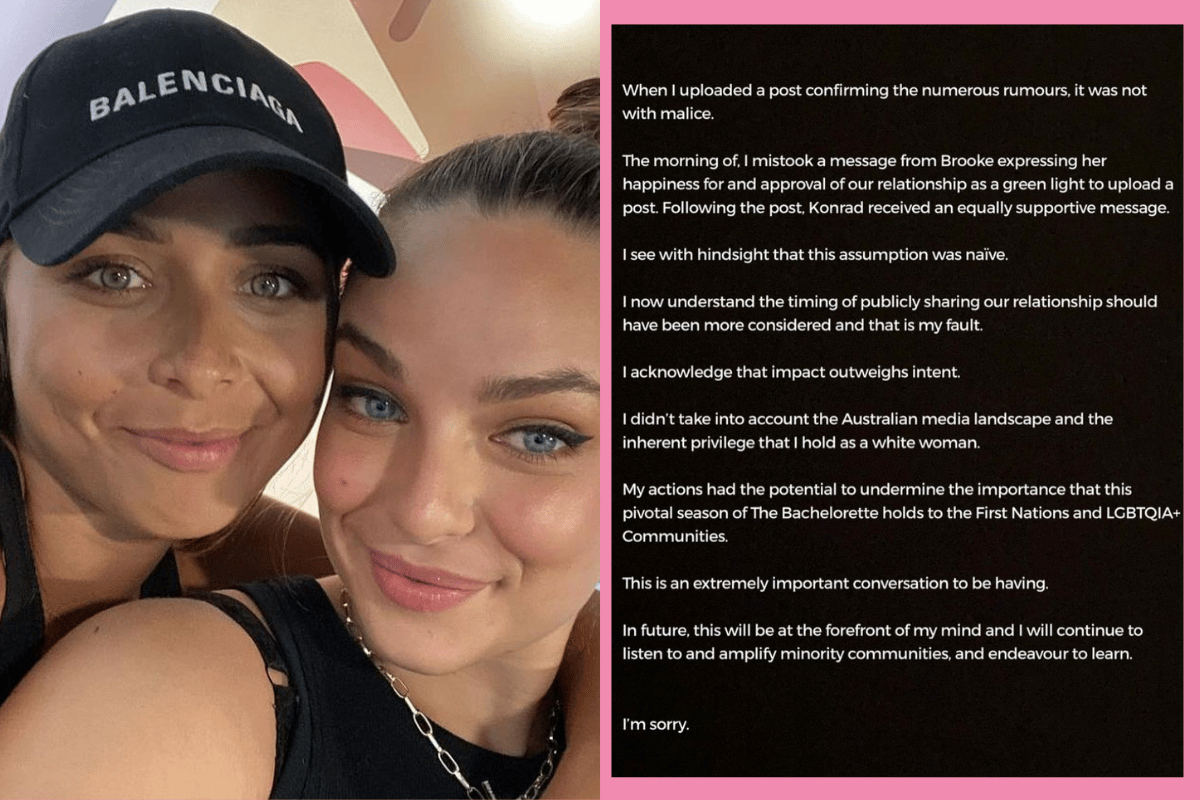 Bachelorette Brooke Blurton has shared a statement following the conclusion of her reality TV season, making reference to "disruptions" that took place during her finale week.

While Brooke does not name anyone, the statement seems to reference a rumoured fall-out with fellow Bach alum Abbie Chatfield, who debuted her relationship with Brooke's former contestant Konrad Bien Stephens just days before this season's finale.

First, Brooke thanked her followers for all the warm messages she received after choosing Darvid Garayeli at the end.

Then, she said she was still mourning the death of her sister two months ago, and felt she "personally and mentally" had been "disrupted by all the crap that came with finale week".

"I'm not a hostile person and literally do not have any hate in my heart," Brooke continued.

"Everyone who watched the show, or was on the show cast and/or working as crew, will know that I put my heart and soul into it and it meant a lot for me to open myself up so vulnerably like that. Not only that, but for what it meant to for LGBTQIA+ and First Nations Community to have that display of representation."

She said this moved her onto her "hardest point":

"For that to be tainted ONCE again by 1. [someone] I thought was a close friend, 2. Another white woman displaying what white privilege looks like, 3. A very clear display of narcissism, hurts me. Literally pains me," she said.

Brooke said she'd reached out to resolve the 'conflict' and "communicate openly about the layers of complexity that this person's actions show and take away from NOT only me, but what it meant for a Queer woman of colour".

She concluded by saying she was asked for comment, and "there it is". 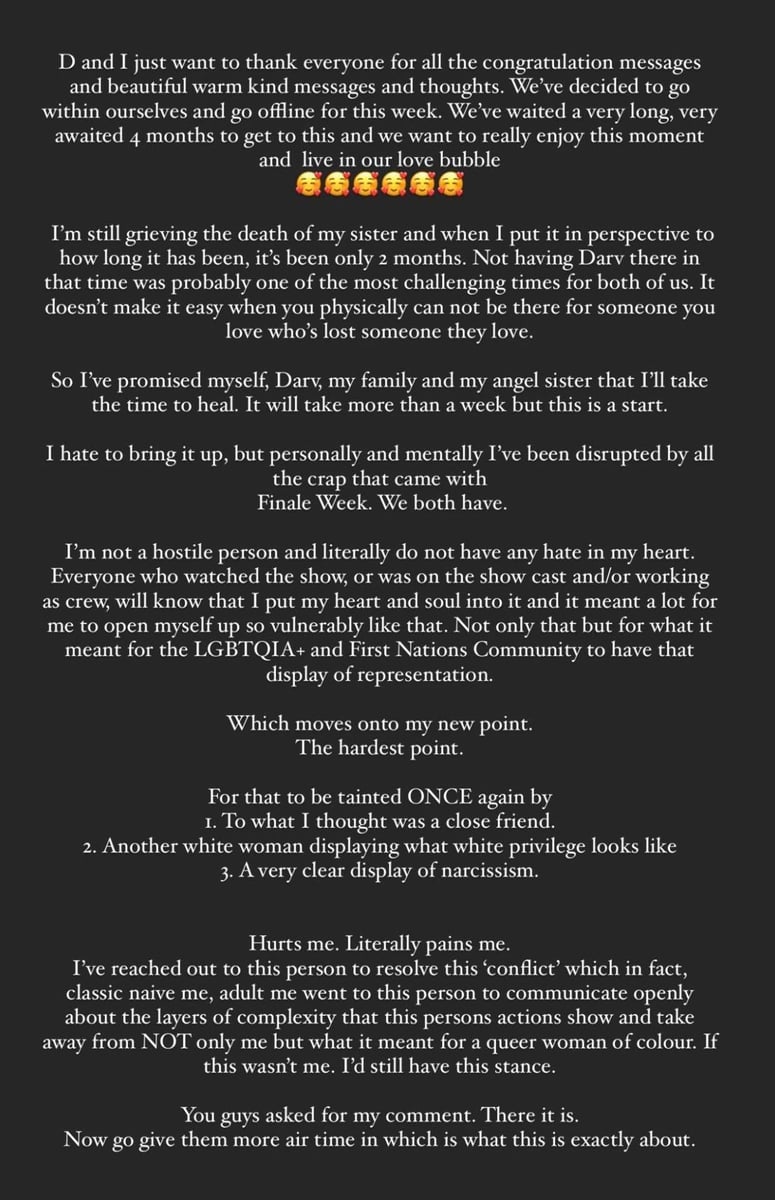 Some additional context: during the finale episode, Brooke invited two close friends to grill her final two, as per Bachie tradition, and it just so happened that one of her mates was Abbie.

Though filmed months beforehand, the timing of the episode was awkward.

Earlier in November, images of Abbie kissing Konrad were published while he was still competing for Brooke's love on-screen.

In a post-finale interview with Mamamia, Brooke briefly spoke about her rumoured fallout with Abbie, saying they were "good, really good".

In a number of interviews, Brooke stated unfollowing Abbie was an accident, but that does not appear to be the case anymore.

Meanwhile, Darvid told Mamamia they were "stoked" about the other relationships that came from the season, which included not just Abbie and Konrad but other contestants Holly and Millie.

"The whole point of the show is for Brooke to find love, and we've found that. As for everyone else, I've kept in touch with Holly and spoke to Konrad, I think Brooke has as well. So we're happy for them," he said.

Listen to Mamamia's entertainment podcast The Spill: The one question that broke new Bachelorette Brooke Blurton. Post continues after audio.

After Konrad left the show, he told Mamamia how he met Abbie.

"It wasn't something that was planned. It was a totally, totally random occurrence where I was out to lunch with a friend who's a mutual friend of Abbie's and Abbie just happened to message my friend while we were having a few cocktails and said 'hey, come see me. I've just got a place in Byron, come down and have a drink'. So they were like 'can we go meet my friend?' Yeah, and so it went from there. It wasn't something that was planned. It was totally random, but she's an awesome chick hey, I was just so stoked I got to meet her."

He said that even though they could bond over their reality TV experiences, he reckons he and Abbie would have hit it off, regardless.

"She was so rad, I feel like if I hadn't been on the show, but I was still with my friend and we went to go have a drink, I feel like it probably would have eventuated in the same way just because I get along with her so well," he said.

She firstly explains that the video of her and Konrad kissing was secretly captured without their knowledge or consent.

Following the video being made public, Abbie says she and Brooke "had a conversation in which I apologised and expressed regret multiple times for our public affection as this was prior to Konrad’s exit from the show. Konrad had a similar conversation with Brooke".

Abbie also acknowledges, "we should have waited to be in private as we are public figures and these are things we need to consider, but we didn’t. We also didn’t consider the possible ramifications of our actions".

The pair chose not to leave the house together after that night in an effort not to be photographed "out of respect for the show and to minimise press surrounding the spoiler of Konrad’s exit".

And when Abbie confirmed she and Konrad are an item, the post was not made with malice.

"The morning of [posting], I mistook a message from Brooke expressing her happiness for and approval of our relationship as a green light to upload a post. Following the post, Konrad received an equally supportive message. I see with hindsight that this assumption was naïve."

Further along in Abbie's post she shared her regret from hindsight, saying: "I now understand the timing of publicly sharing our relationship should have been more considered and that is my fault. I didn’t take into account the Australian media landscape and the inherent privilege that I hold as a white woman."

She continued: "My actions had the potential to undermine the importance that this pivotal season of The Bachelorette holds to the First Nations and LGBTQIA+ Communities. In future, this will be at the forefront of my mind and I will continue to listen to and amplify minority communities, and endeavour to learn," she wrote.

Since sharing her statement, the comments have flooded in - with some previous Bachelor in Paradise cast mates seemingly taking sides in the disagreement.

"This is great," says Alisha Aitken Radburn. "Hope you take her call now and have the conversation."

Clementine Ford also shared an Instagram Story statement on the topic. Here's her message in full: 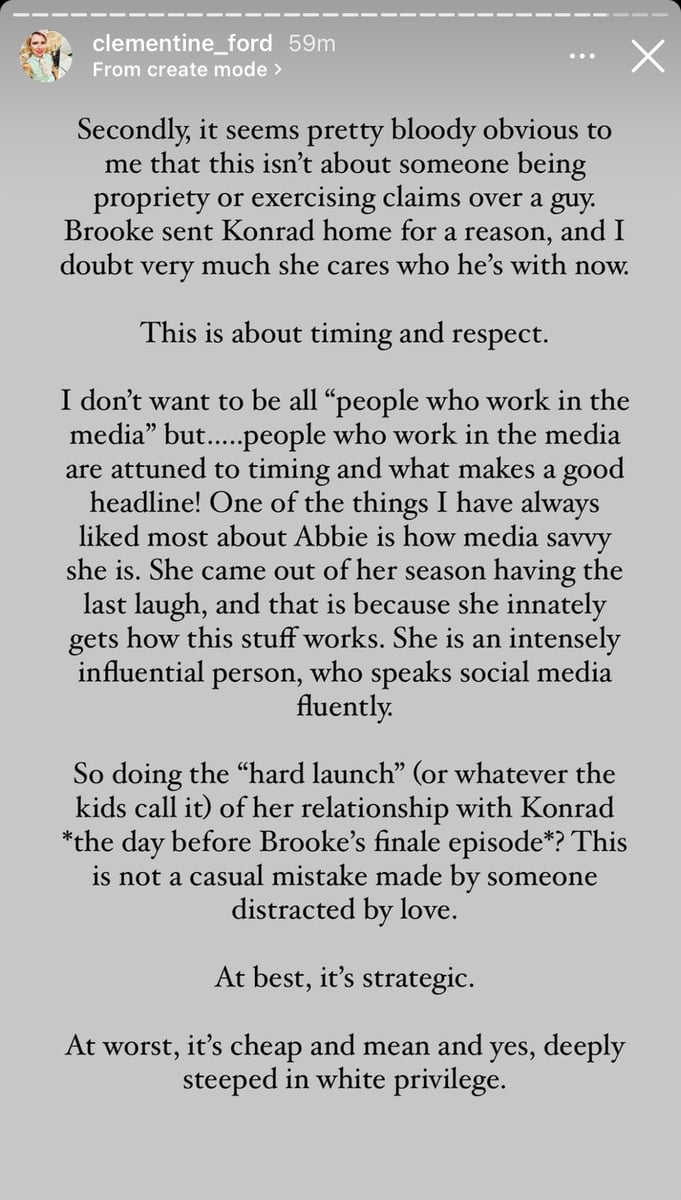 Reply
Upvote
3 upvotes
Its one of the best apologies Ive seen in a while. As always, the guy involved gets off scott free.
A
anonymous 2 months ago