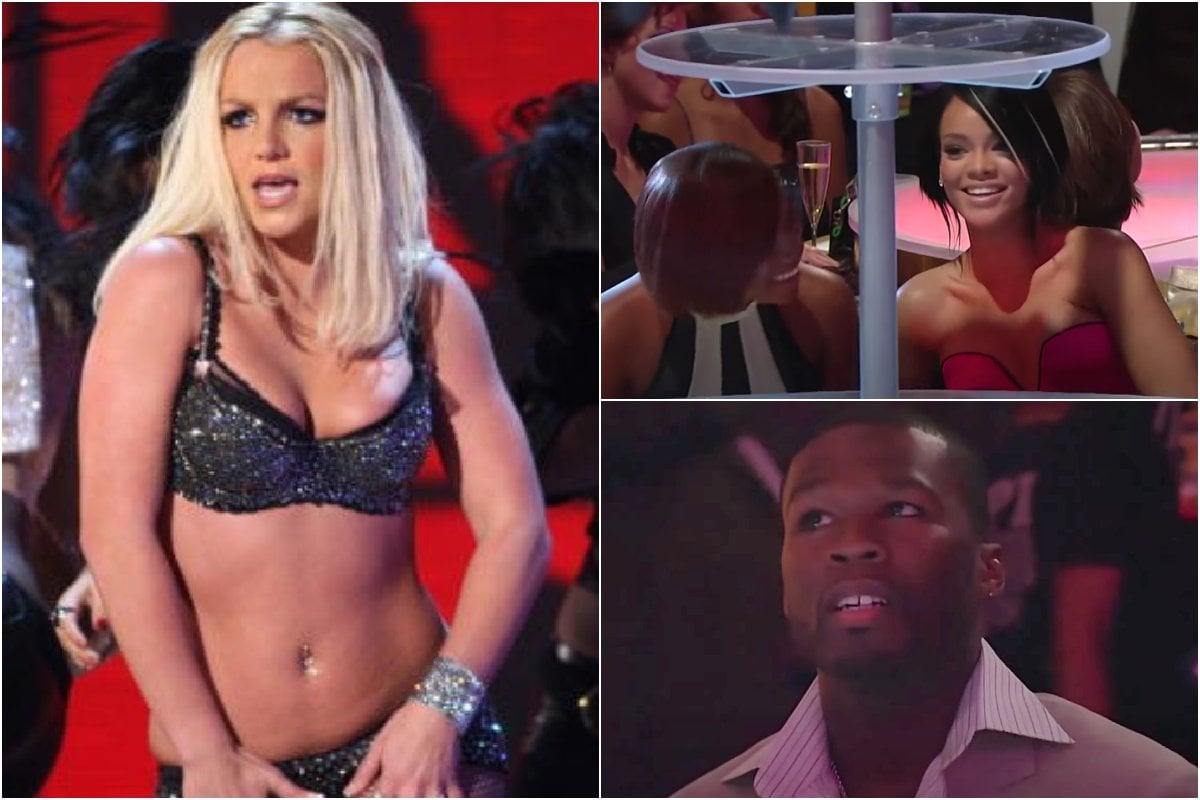 Blue eyes, made so by coloured contacts.

She doesn't smile. Her lips twist slightly, acknowledging the room of hundreds of her peers. Rihanna. Kanye. Her ex-boyfriend is in the room somewhere, Justin Timberlake.

And then there are the millions watching at home.

It's impossible to know exactly what is going on behind 26-year-old Britney Spears' eyes as she stares out into the sea of round, white tables.

Perhaps she is terrified.

Perhaps, as people will later speculate, she's under the influence of drugs or alcohol. Or both.

Perhaps she doesn't want to be there at all. And despite her health battles, a messy separation, being harassed and stalked by paparazzi since before she was a teenager, there she is on stage anyway.

And the people making money off her do so whether she sinks or swims.

That night, Britney will sink.

The performance itself doesn't even last four minutes.

She looks dizzy and unsteady on her feet.

At some points, she badly lip syncs. At others, she stops lip syncing altogether.

As she performs a series of movements, she looks like a hostage. No one is enjoying this performance less than Britney Spears herself.

She wears a bra and underpants, black and sequined, with high boots coming halfway up her calf.

Her youngest son isn't even one. Her eldest son is a few days off turning two.

That of course won't stop the commentary about what her stomach looks like in lingerie.

No one in the room appears to be moving. Cuts to P. Diddy, Rihanna and 50 Cent's straight faces will be used as evidence that the performance was universally shocking. Celebrities in the room couldn't even pretend to like it. 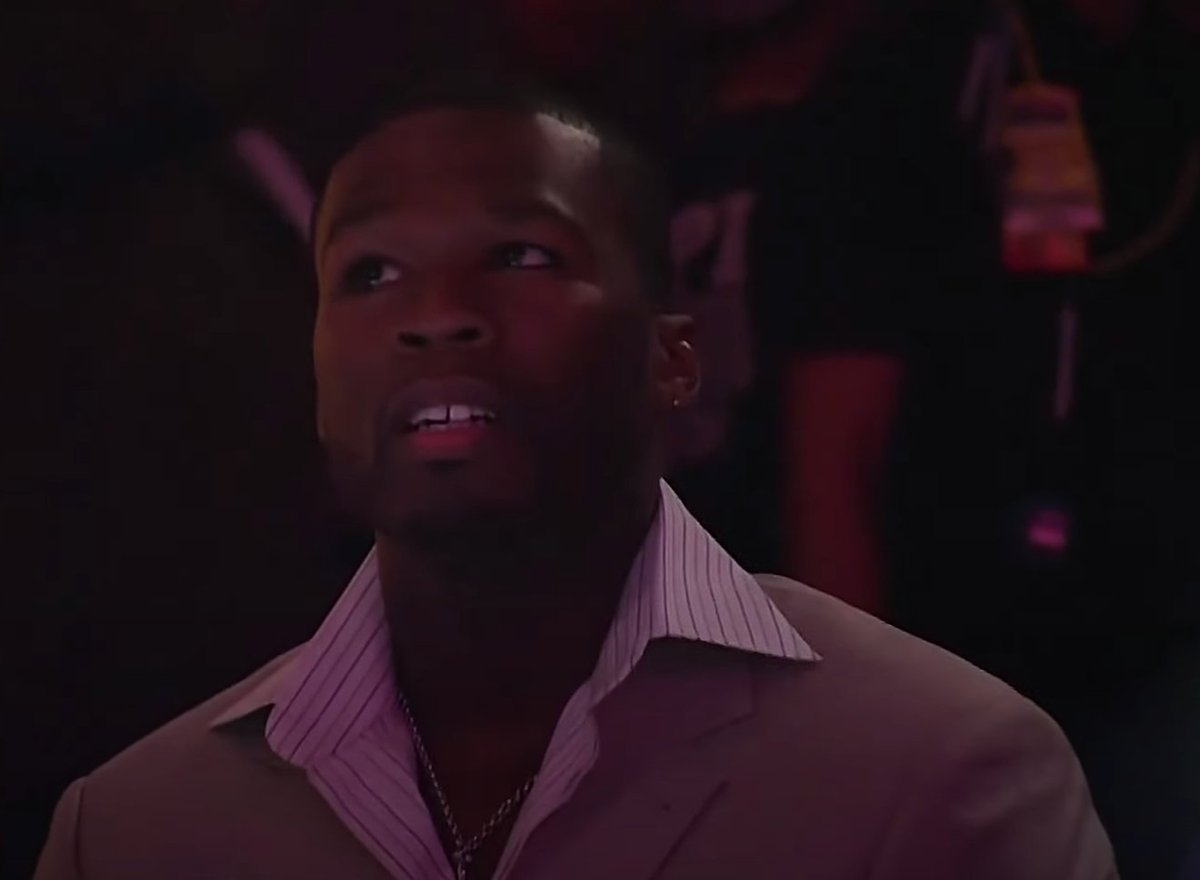 A clip of Rihanna laughing with a friend towards the end will go viral. Rihanna has always denied she was laughing at Spears.

At one point Spears covers her face, seemingly uncomfortable with the light. 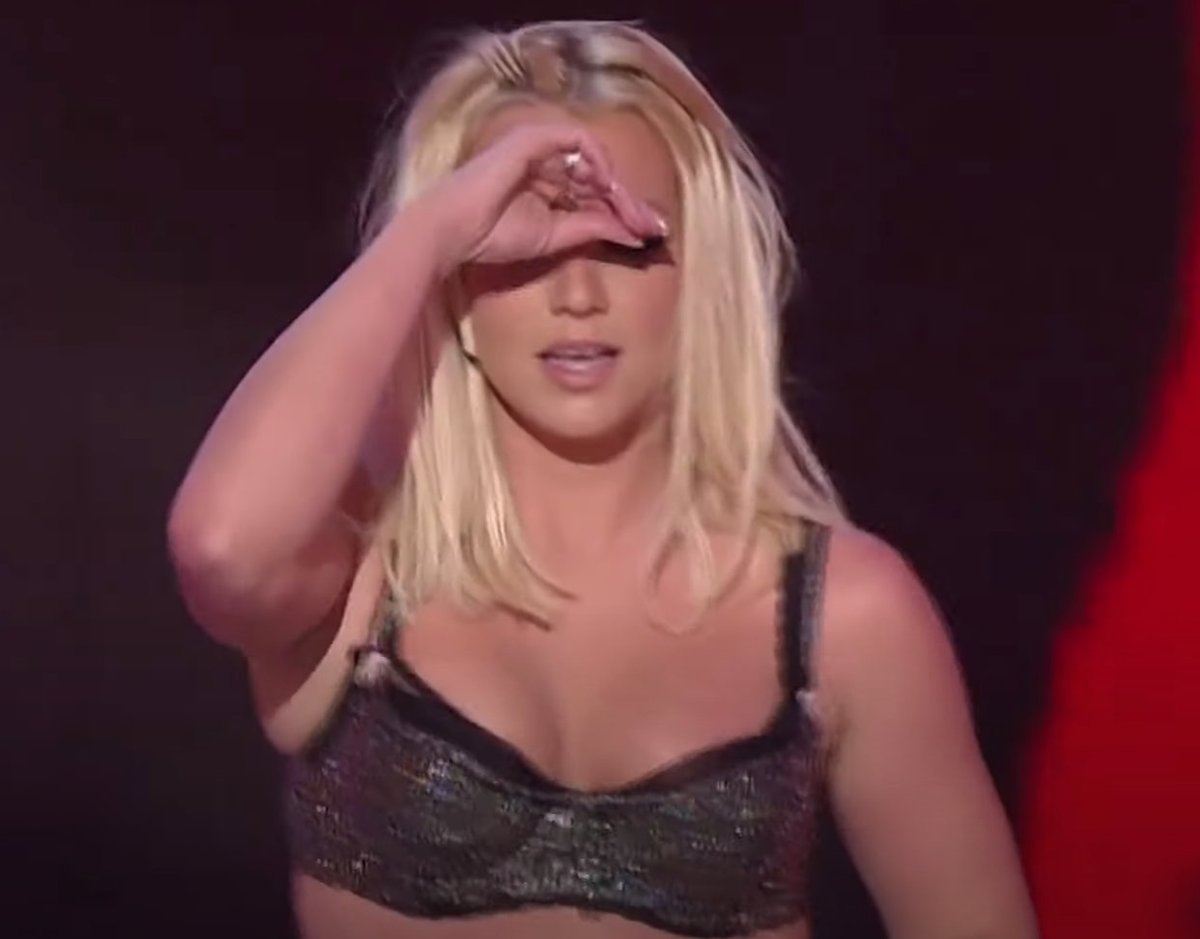 Britney Spears during her VMAs performance.

The one time she smiles is at the very end, when the music stops and the room politely applauds. She mouths "thank you" before exiting the stage.

Multiple sources will say that she cried "uncontrollably" backstage.

"Britney was crying backstage," one source told tabloids. "She was devastated. She was really nervous beforehand and immediately knew she had blown it."

"I looked like a fat pig!" What we didn't see on screen.

According to a source at MTV, Spears was in a state of "absolute blind panic" before the performance.

"She knew she hadn't rehearsed enough and was going to mess up the whole show and possibly her career — then she saw her hairdo and it was the final straw.

"She went into a wild rage and started lashing out at everyone — including her stylist."

Of course, we cannot verify whether this version of events is true. There were countless rumours surfacing at the time.

One rumour referred to comedian Sarah Silverman, who performed a stand up set at the VMAs. One of her punchlines was referring to Spears' two children as "the cutest mistakes you’ve ever seen".

Watch the trailer for the new documentary, Framing Britney Spears. Post continues below.

Video via The New York Times.

An insider alleged that Spears had heard Silverman rehearsing for her set, and became extremely upset at the reference to her children. A representative for Silverman, however, said no one heard the jokes before they were delivered.

What we do know, is that Spears was spotted at a Las Vegas nightclub the night before the VMAs, arriving home just 12 hours before her performance at the awards show.

It was reported that Spears missed a number of rehearsals in the lead up, and when she appeared on stage, she had only rehearsed "two or three times".

When she appeared on stage, a source speaking to Us magazine said: "She was able to see video of herself throughout the auditorium.

Multiple insiders said they witnessed Spears crying backstage, with reports that she "broke down" and repeated "I'm so embarrassed".

Spears' performance was meant to be a comeback.

In the year prior, Spears had become a cultural punchline.

Pictures went viral of her shaved head alongside the headline "Britney Shears". Next were the images of her attacking a car with an umbrella, after she was ceaselessly provoked by paparazzi.

In 2005, Spears married her childhood friend Jason Allen Alexander in Las Vegas, before having the marriage annulled 55 hours later. A court document said Spears "lacked understanding of her actions".

A few months later, Spears became engaged to Kevin Federline, a dancer, and their relationship was closely followed on their reality television show Britney and Kevin: Chaotic. She would later refer to the show as "probably the worst thing I've done in my career".

In February 2006, Spears was photographed driving with her infant son on her lap rather than in his car seat. Child advocates were furious. By mid 2006, she had separated from Federline.

In late 2006, she was photographed exiting a vehicle, the camera angled up her dress. It captured her bare crotch.

At 25, Spears' vulva was all over the internet.

Listen to The Spill, where hosts Laura and Kee discuss the new Britney Spears documentary. Post continues after podcast.

In early 2007, Spears' aunty with whom she had been extremely close, died of ovarian cancer. By February, she had been admitted to a drug rehabilitation facility, which she checked out of within 24 hours. In that same week, she shaved her head. She was photographed crying, trapped in a car surrounded by paparazzi.

"I'm scared," she can be heard saying.

"I don’t want everybody touching me," she plead. "I’m tired of everyone touching me."

In the brand new documentary Framing Britney Spears, Times critic-at-large Wesley Morris says: "She's saying essentially with no hair, I quit. Whatever you guys are looking for in terms of me coming back and being that person again, that person is gone, and you have destroyed her.

"The idea that you could look at [those images] and only see a 'crazy person' that just tells me what a vulturous society she was working with."

Through what is retrospectively seen as a clear mental health crisis, Spears still performed. She still produced an album. It topped the charts all over the world.

It was upon that backdrop that Spears appeared on stage at the VMAs.

And it's worth looking at how the world responded.

How people responded to the performance.

Early reports likened Spears to a "half asleep... zombie" with many calling her "unprepared" and "lazy".

Singer and songwriter Akon commented after her performance: "It definitely could have been a lot better. She seemed nervous ... you could tell by the expression on her face. Instead of just blocking everybody out and doing her thing, you could tell she was thinking about it."

Silverman said: "Britney Spears. Wow. She is amazing. She is 25 years old, and she's already accomplished everything she's going to accomplish in her life. It's mind blowing."

The media was so disgusting.
WE ARE SORRY BRITNEY pic.twitter.com/2ZD6UG4ddq

And then there were the tabloids.

The New York Post published: "Totally lame, pathetically lip-synched... the song about lusting for too much wasn’t enough to launch a dinghy, let alone re-launch the career of this ditzy disaster."

The New York Times said: "She didn’t disappoint; she was awful. Visibly nervous, she tottered around the stage, dancing tentatively and doing nothing that sounded or looked like real live singing."

ABC News mocked her body, with the words: "Her sequined bra/panty costume confirmed that like her former pop-star magnetism, those abs of yore are now just a memory."

E Online were among dozens of publications that criticised Spears' body, adding: "Her once rock-hard abs have subsided to a somewhat less firm state — which is entirely understandable, given that she's carried two children. Not so understandable was her decision to flaunt her semi-gelatinous middle in a black sequined bra-and-panty number."

Celebrity publicist Michael Levine implied that someone should have told Spears "you're too heavy", the New York Post said she "jiggled like jello" and Joy Behar on daytime talk show The View said: "She’s a good role model in that she comes out and shows she’s not skinny anymore."

What happened to Spears after the VMAs was a pile-on before we even had the word 'pile-on'.

Whoopi Goldberg described Spears as "like a bad stripper", with television psychologist Dr. Phil adding that he thought he'd "bought tickets to a train wreck".

That was how the world responded to a 26-year-old performing on stage, amid very public mental health crises, multiple stints in rehab and relationship breakdowns.

Despite Spears' performance, she would return the next year and take home three awards.

Her album, which she had recorded and toured at one of the lowest points in her life, sold millions of copies. She would soon become the youngest female artist to have five albums debut at number one. She would earn herself a Guiness World Record.

The question today is: At what cost?

History will not look favourably on what happened that night in 2007, or in the weeks and years afterwards.

Spears was exploited by management, and by an industry, who needed her on stage, regardless of whether she was well enough.

Much of the audience laughed, and likely so did we.

She had been a tabloid plaything much the same as Spears, exploited and mocked and carted out by networks of people who made an enormous amount of money off her.

Perhaps that's when the narrative shifted for Spears. We were reminded of her humanity.

But by then, it's worth acknowledging how much damage had already been done.