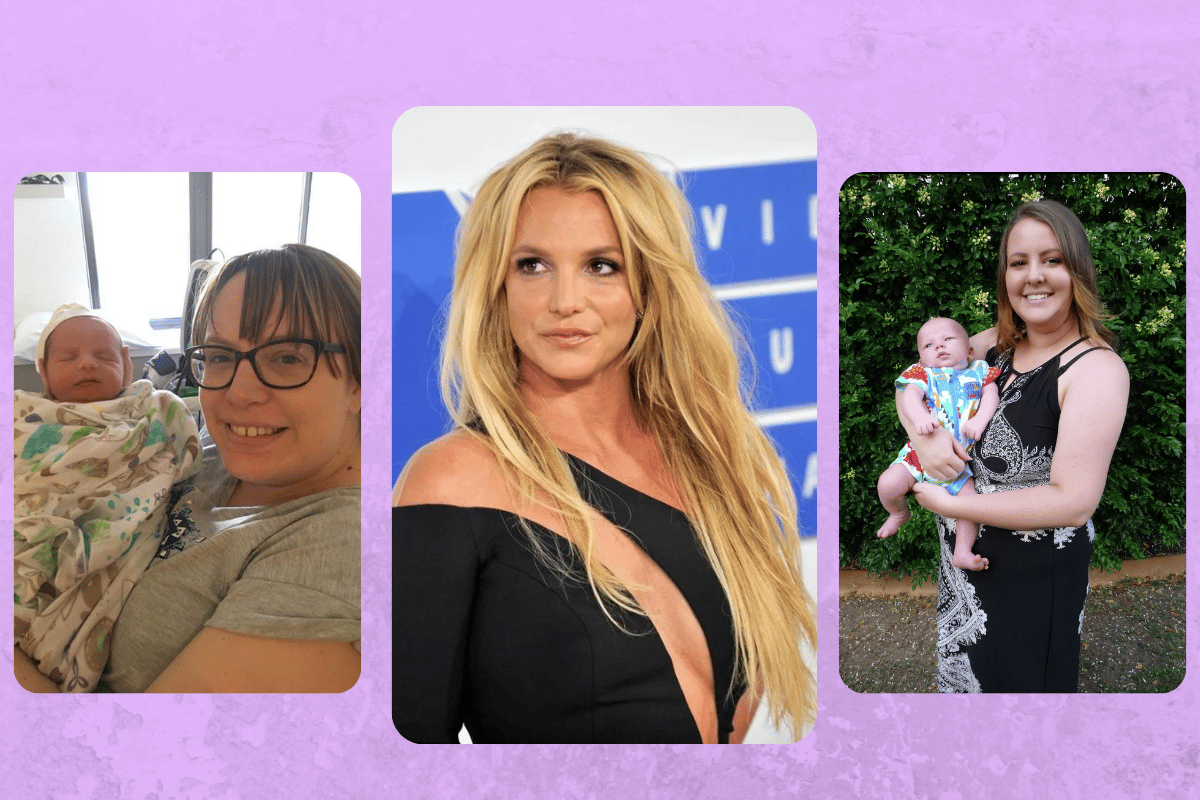 This post deals with severe depression, anxiety and suicidal thoughts, and could be triggering for some readers.

Britney Spears' recent pregnancy announcement on Instagram was clearly a moment of joy for the star who lived under a strict conservatorship for 13 years until November 2021.

Aside from her delight at the news, the Instagram post included a reference to her previous two pregnancies with sons Jayden and Sean, the harassment she received at the hands of the paparazzi, and her experience with perinatal depression.

"I obviously won’t be going out as much due to the paps getting their money shot of me like they unfortunately already have," Britney shared with her 40 million followers.

"It’s hard because when I was pregnant, I had perinatal depression... I have to say it is absolutely horrible. Women didn’t talk about it back then. Some people considered it dangerous if a woman complained like that with a baby inside her... but now women talk about it every day. Thank Jesus we don’t have to keep that pain a reserved, proper secret."

As Britney writes, thankfully, awareness and support for mental health conditions has improved since she was last pregnant in the mid-2000s.

According to PANDA, one in five women in Australia experience perinatal (or antenatal) depression and anxiety, and one in ten men. This makes it a lot more common than we might think.

Listen: An episode of This Glorious Mess on how postnatal depression can affect the whole family. Post continues below.

Mum-of-one, Jess, was initially overjoyed to discover she was pregnant after suffering a miscarriage at seven weeks.

"I sort of pushed my pain under the rug and felt excited to be pregnant again so quickly," Jess says.

"But it soon became very hard to enjoy it because I was so sick. I had to keep crackers by my bedside to eat as soon as I woke up, otherwise I would projectile vomit onto the bed.

"I had to drive an hour to work for my busy job as an events manager and I had to keep pulling over on the motorway to be sick. It quickly took its toll as I am not normally a sick person."

As someone who usually liked to look her best in makeup and heels, Jess soon found she didn't care about her appearance.

"I had long hair that I usually took good care of, but I just began scraping it up in a bun. I had no energy to even brush it. It got so matted I almost had to shave my head.

"I felt and looked awful but I didn’t care. I began having panic attacks at work and would avoid seeing clients. I began calling in sick more and more and eventually I quit my job."

Jess was also dealing with the stress of being in a controlling and violent relationship with her baby’s father.

"It was a lot. After I left my job, I stayed in my bedroom for a week. When I went out on the rare occasion to see my parents, I would drive past this huge tree and I had thoughts of driving into it, but the rational side of my brain would stop me.

"At my 28 week scan, the woman performing the scan took me to one side and asked me if I was okay.

"She could see I looked awful and wasn’t excited about the baby. She pleaded with me to get some help. While I knew something wasn’t right, I had this mindset that I was a strong woman, I didn’t think I needed help."

Like Jess, nurse and mum-of-one Megan was initially happy when she fell pregnant.

Megan had gone through years of trying for a baby and the IVF treatment meant she had gained weight and felt unlike herself.

"My pregnancy was rough, and I quickly spiralled into a dark headspace," Megan recalls.

"I vomited a lot and felt awful. I also had this sense of guilt hanging over me. Like, maybe I shouldn’t even be pregnant because we had to use IVF and so all the sickness was the universe punishing me.

"I had put my career on hold and we had spent thousands of dollars on IVF and so there was a lot of pressure on me to enjoy pregnancy because I had wanted it so badly. I would see all these glowing and gorgeous pregnant women on social media and want to be them but I wasn’t. I felt ashamed."

Megan says she made it to work each day, but that she was very withdrawn.

"I could only manage the absolute basics of getting up and going to work and then coming home and going to bed. I had an internal darkness I couldn’t shake, and it exhausted me."

At a 15-week check-up appointment with her obstetrician, who had also been her gynaecologist for 10 years, Megan broke down.

"She asked me what was going on and I told her everything. For the first time I felt really seen and heard. She confirmed that I definitely wasn’t okay but that perinatal depression was common and she would help me. Just knowing this and that there were treatment options, really made a difference to how I felt.

"She suggested I try antidepressants and as I respected her professional knowledge and opinion, I gave them a go."

After two weeks on the antidepressant medication, Megan felt less overwhelmed and could process other things outside of her work and home.

"My vomiting reduced and with support from my partner and regular checkups with my GP, the last trimester of my pregnancy was actually great. I felt happy."

As Megan’s perinatal depression symptoms eased after she began treatment, Jess continued to struggle until after the traumatic birth of her son.

"I didn’t give birth in the hospital I wanted to, and instead ended up in a bigger hospital further away from home. The follow up care was non-existent as I didn't want to drive back to see them and no one checked up on me.

"While my baby was a good sleeper, I wasn’t okay. I ended up day-drinking as a way of coping with my stress and as someone who rarely drank, I knew it wasn’t right.

"I saw my family GP who really took the time to ask me about the baby and me and he got me started on a mental health plan after diagnosing me with perinatal depression. I also escaped from my damaging relationship and I began seeing a psychologist."

A post shared by Jess | The Aussie Working Mum (@theaussieworkingmum)

With professional help, support from her family and learning to take time for herself, Jess is now thriving.

She started a cleaning and organisational business after discovering that those activities helped to soothe her anxiety.

"I love owning my business and the work helps me to keep my head clear. I now know when to ask for help and I make time for things I enjoy in between caring for my son and working. I no longer care about other people’s judgement and I like being honest and raw about my parenting journey on Instagram."

Megan is not currently on antidepressants, but her journey to good health has been up and down since giving birth to her son in 2017.

"I ended up seeking further counselling about 18 months ago and they diagnosed me with PTSD resulting from my experience of pregnancy. I am thankfully doing okay now."

Megan wants other women who are struggling with their mental health to consider knowing when to seek professional help.

"Mothers' groups and friends can play a role in helping guide you through difficult times, but with the rise in false information since the start of the pandemic, I would always advise women to talk to a health professional.

"Having my mental health issue acknowledged, diagnosed and treated medically made such a huge difference. Medication is around for a reason and a mother that is not happy or healthy does more harm than good.

"Mums need looking after too."

If you think you or someone you know may be suffering from depression, contact PANDA – Perinatal Anxiety & Depression Australia. You can find their website here or call their helpline – 1300 726 306.