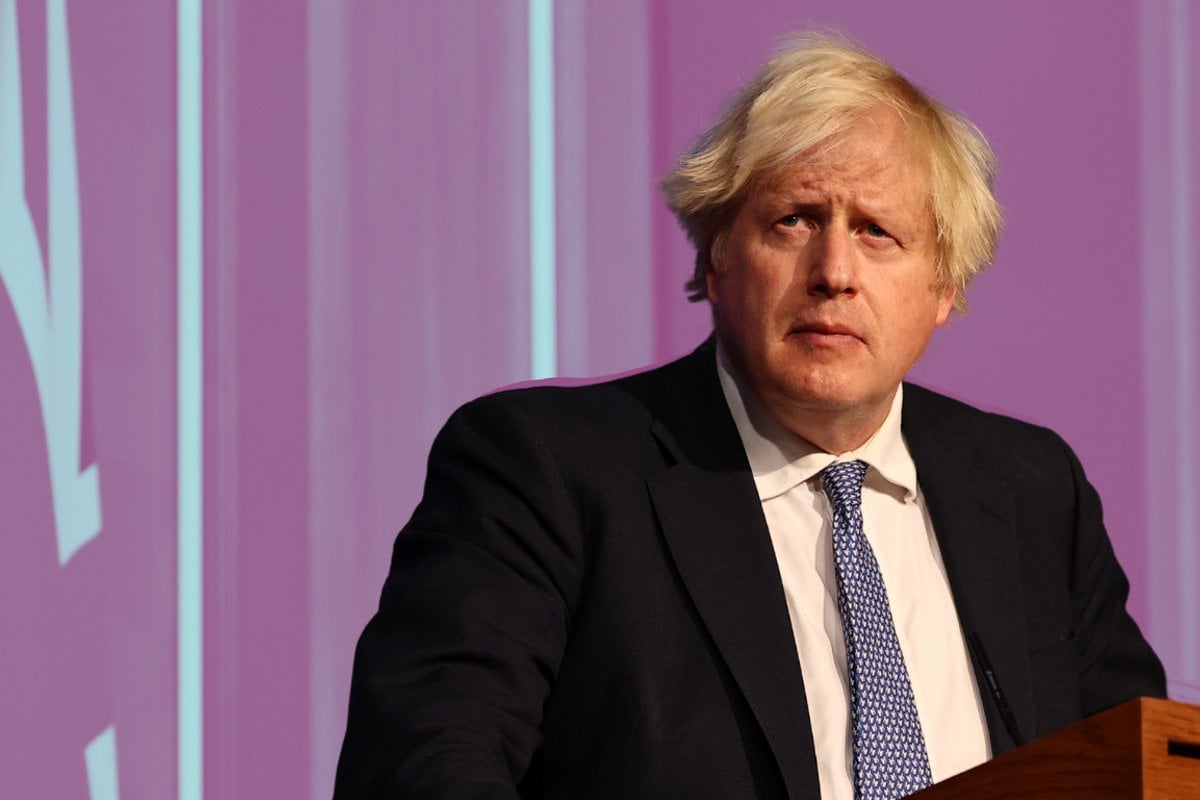 If you've been wondering why Boris Johnson's name keeps showing up in headlines lately, you're not alone.

The UK Prime Minister has recently found himself in hot water after claims a Christmas party was held at Downing Street last year while the UK was in the midst of a strict second lockdown.

A leaked video of staffers joking about the alleged party this week also didn't help the situation.

Outside of government, Johnson's personal life is also making news after he welcomed a second baby with his wife Carrie Johnson.

Here's a rundown on why everyone's talking about Boris Johnson at the moment.

A lockdown Christmas party and a leaked video.

Accusations about a Christmas party first began two weeks ago after the Daily Mirror reported that multiple gatherings had taken place at Johnson's official No 10 Downing Street residence during lockdown last year.

One of those gathering was a Christmas party, which the publication claimed Johnson's team held on December 18 2020 while London was still under strict tier three restrictions and indoor mixing was banned.

The party, which the Prime Minister did not attend, reportedly saw dozens of staffers drinking wine and playing games while the rest of the country was stuck at home and separated from their families.

When asked about the party last week, Johnson and his officials initially denied it ever took place and that any COVID-19 rules were broken.

However, questions have once again arose after a video was leaked this week which appears to show Johnson's staff joking about holding a Christmas party.

In the video, first aired by ITV News, Johnson's then-spokeswoman, Allegra Stratton, is seen laughing as she's asked by another staffer about the party during a mock press conference on December 22.

"Would the Prime Minister condone having a Christmas Party?" she's asked, before laughing and asking staffers "what's the answer?"

"It wasn't a party, it was cheese and wine," one staffer suggests.

She then asks "is cheese and wine alright?" before adding "this fictional party was a business meeting... and it was not socially distanced".

Stratton also claimed in the video that she didn't attend the party.

Watch analysis from @PaulbrandITV and @Peston on News at Ten

A resignation and investigation.

After the video was leaked, Stratton announced her resignation in an emotional statement on Wednesday.

"My remarks seemed to make light of the rules, rules that people were doing everything to obey," she told reporters outside her house in north London.

"That was never my intention — I will regret those remarks for the rest of my days.

"To all of you who lost loved ones, who endured intolerable loneliness and who struggled with your businesses — I am truly sorry and this afternoon I am offering my resignation to the Prime Minister."

Johnson also apologised for the video, saying he was "repeatedly assured" that no party had taken place.

"I understand and share the anger up and down the country at seeing No 10 staff seeming to make light of lockdown measures, and I can understand how infuriating it must be to think that the people who have been setting the rules have not been following the rules," he said during Prime Minister’s questions in the House of Commons.

"Because I was also furious to see that clip and… I apologise unreservedly for the offence that it has caused up and down the country… I apologise for the impression it gives.

He also said the country’s most senior civil servant, Simon Case, would investigate the claims.

"I have asked the Cabinet Secretary to establish all the facts and to report back as soon as possible, and it goes without saying that, if those rules were broken, then there will be disciplinary action for all those involved," Mr Johnson said.

"We've all watched the video of the Prime Minister's staff, including his personal spokesperson. They knew there was a party, they knew it was against the rules, they knew they couldn't admit it, and they thought it was funny," he said.

"The Prime Minister has been caught red-handed. Why doesn't he end the investigation right now, by just admitting it?"

People across the country followed the rules, even when that meant being separated from loved ones.

They had a right to expect the government was doing the same.

To lie and to laugh about those lies is shameful.

We have a Prime Minister who’s socially distanced from the truth. https://t.co/h6t0mzHBRF

On Friday, Johnson, 57, and his wife Carrie, 33, announced they had welcomed a baby daughter.

"Both mother and daughter are doing very well," a spokeswoman for the couple said in a statement.

The baby girl, who was born in a London hospital early on Thursday, is the couple's second child together. They welcomed their son Wilfred Lawrie Nicholas Johnson in April last year.

Johnson is believed to be the father to five other children. However, he continuously refuses to confirm how many children he has.

Johnson and Carrie, who married in May this year, first shared they were expecting a baby in July after suffering a miscarriage earlier this year.

"At the beginning of the year, I had a miscarriage which left me heartbroken. I feel incredibly blessed to be pregnant again but I've also felt like a bag of nerves."