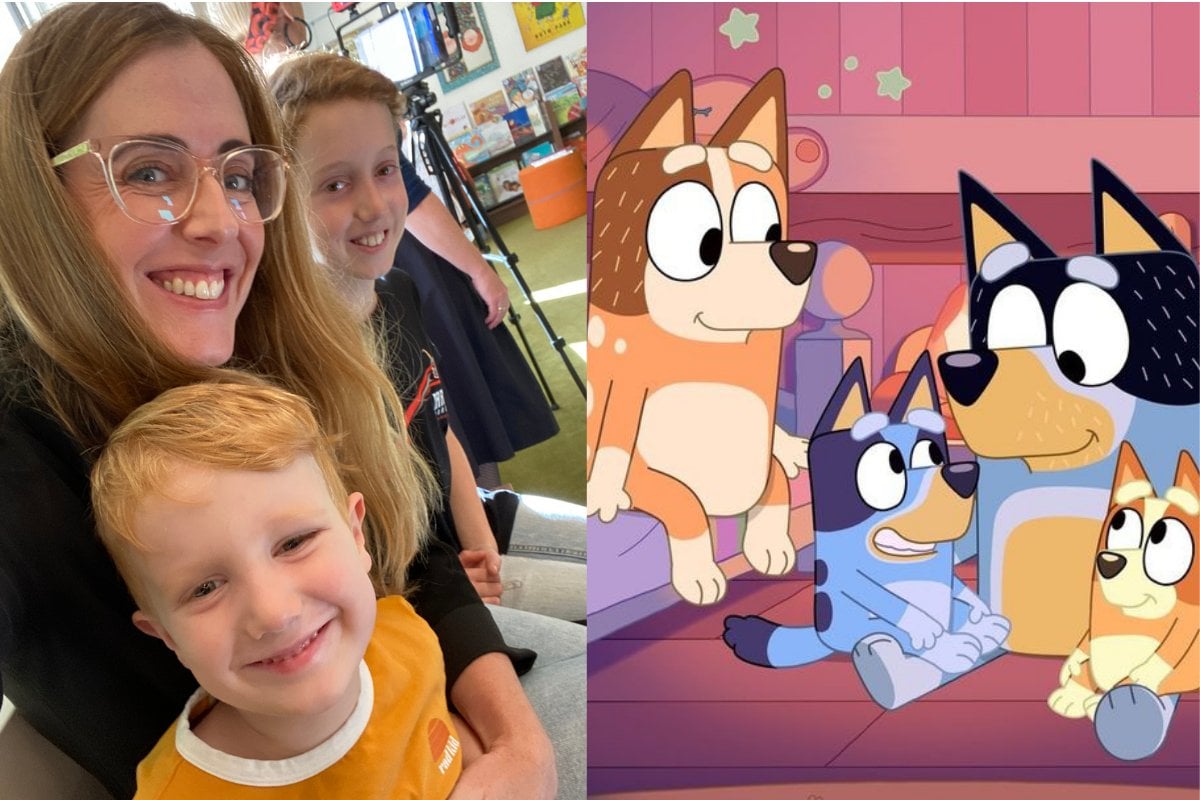 I love the ABC cartoon Bluey that follows a family of Blue Heeler dogs and their friends. The characters are fun; the storylines are touching and relatable, and the parenting by Bandit and Chilli is aspirational. I wish I had a fraction of their energy and enthusiasm for fun parenting and I am sure my kids wish the same.

This week an episode of Bluey, or a character called 'Lucky's Dad', started a national conversation about the rules of the kids' party game 'pass the parcel' and whether us parents in 2021 are doing it all wrong.

For those of you who have not yet watched this so-called controversial episode, please let me explain.

Watch: Money expert Mel Browne explain the 5 money lessons your parents taught you that you need to forget. Post continues below.

The episode opens at a kid's birthday party.

One of the mums is rushing about (after probably having done all the party prep) and she asks Lucky's Dad if he could run the game of pass the parcel. He jumps into action from where he was just chilling out with all the other dads, and immediately gets confused.

He is told he has to watch the game and stop the music strategically, to ensure that each kid gets a little present that the mum has carefully wrapped into each layer.

Lucky's Dad explains how back in his day, in the 80s, pass the parcel had just one big prize at the end. It was much easier because the grownups could just carry on chatting and randomly stop the music whenever they felt like it.

On this occasion, however, he does what he is told and all the kids get to take home a lollipop or a cheap bit of plastic tat from each layer.

Cut to the next birthday party, and Lucky's Dad is taking control of pass the parcel.

He doesn't want to raise a "nation of squibs" and he says the kids need to "suck it up" more regarding losing. So, in order to guide them away from... squib-ness, he just includes one big prize in pass the parcel, as per the 80s rules.

Cue crying from all the sad little squibs who didn't get their bits of future landfill to take home.

Lucky's Dad can't cope with the tears, and he starts handing out cash and giving away his own kids' birthday gifts to calm everyone down.

But - plot twist and spoiler alert - the kid that won the big prize is actually pretty stoked. So, he decides to run Lucky's Dad's version of pass the parcel at his own birthday party.

Over several scenes at other parties, all the kids opt for the 'big present' version of pass the parcel. They get turns at both winning and losing, and they come to understand the meaning of both.

Thanks to Lucky's Dad's clever insight, the kids are saved from previous bad parenting choices - and life as a squib. Crisis averted!

And so onto the great pass the parcel debate that has ensued in the media since the episode dropped.

I grew up in the 80s with the OG version of the game and all I remember was a lot of holding onto the parcel for too long, or snatching it off the other person while you hoped the music might stop on you.

Or maybe this was just me because I was a selfish child of the 80s Reagan/Thatcher-era?

The notion that 80s or 90s parenting was superior and that we as kids were better at 'sucking it up' because we didn't win mini prizes in pass the parcel is an interesting concept.

On the one hand, I get it. Lucky's Dad has a point - handing out too many awards and prizes lessens their meaning. Plus, those tiny bits of plastic that the kids lose almost instantly are definitely bad for the environment.

On the other hand, I can think of plenty of things about being raised in the 80s that were not so crash hot. We might have learnt to suck it up more often, but we didn't learn about gender or racial inequality, applying sunscreen, bodily consent, or even mental health until well into adulthood. This generation are miles ahead of us, and thank goodness for that.

Yes, it can be good to learn from the past, but I am not a fan of rose-tinted parenting and childhood nostalgia when it is far more realistic to think that parents of the 80s (mostly) did their best at the time, and parents in 2021 are (mostly) doing their best now.

Listen: Holly and Andrew discuss their golden rules for parenting on This Glorious Mess. Post continues below.

As a mum of two boys, my feelings on Lucky's Dad's version of pass the parcel are honestly pretty neutral.

We have been to parties with all the presents in all the layers and I do think to myself that it's kind of pointless, but I also don't think that every moment needs to be a teaching moment. After all, birthday parties are meant to be fun.

And after the last two years when our kids have missed out on so much social fun and frivolity thanks to COVID, this sentiment has never been more important.

For anyone concerned they are contributing to raising a 'nation of squibs', don't forget there are plenty of other opportunities to learn about disappointment and loss at kids' parties outside of pass the parcel.

There can only be one winner of 'musical chairs' or 'musical statues', or maybe your kid can't climb as high on the soft play as the other kid, or run as fast while playing 'tip'. They will no doubt lose at something, and yes, there might be tears.

As parents, we just want to get through the party without our house being irrevocably broken or the cat being traumatised. So with pass the parcel, and all the party games, I say don't overthink it.

It's a question of what works best for your kids, your sanity, and your budget. And whichever pass the parcel style you opt for - Lucky's Dad's version or not - you're not doing it wrong.

And I'm certain, either way, it will have no bearing on whether you are raising a bunch of squibs.

What do you think about the pass the parcel rule? Do you agree with Lucky's Dad or think there are more important things to worry about? Tell us in the comments below.

A
alexmoon a month ago

Reply
Upvote
1 upvotes
The version of pass the parcel I grew up with was slightly different to both of these approaches. Instead, the parcel was passed around the circle and every single child simply unwrapped the next layer to see if they were the one to win the single, big prize. There was no randomly stopped music. It was pure dumb luck as to whether your turn unwrapped the final piece of paper to reveal the prize. It was very suspenseful and didn't result in any fights because all we had to do was take our turn. I can't ever remember winning, but it was a tonne of fun. A prize in every layer renders the whole game pretty pointless in my opinion. Personally, I really enjoyed the suspense, even as a child who ended up disappointed all of the time lol.
M
mamamia-user-482898552 a month ago

We might have learnt to suck it up more often, but we didn't learn about gender or racial inequality, applying sunscreen, bodily consent, or even mental health until well into adulthood.