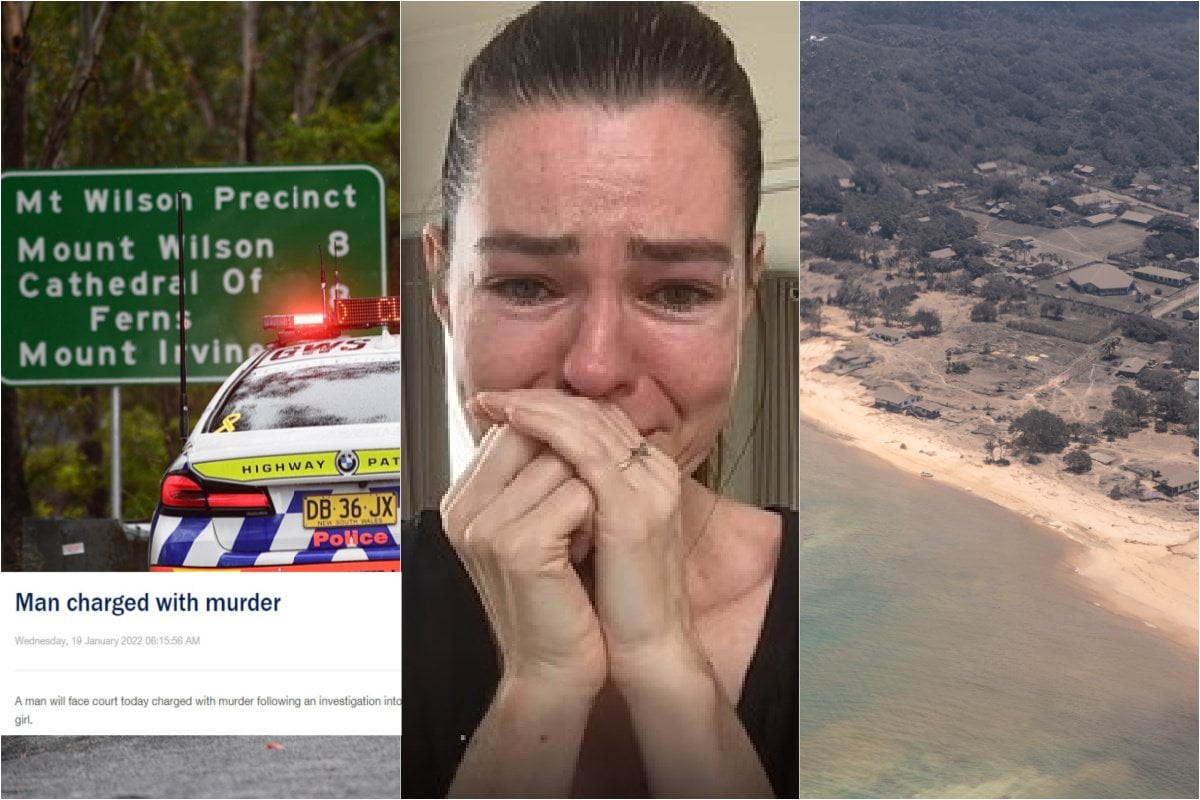 Man charged with murder of 9yo missing child.

A man has been charged with murder following an investigation into the disappearance of a nine-year-old girl in NSW.

The child was reported missing in the Blue Mountains at 8.20am on Friday January 14, sparking a major air and ground search.

#BREAKING: New South Wales Police have made a major breakthrough in the case of a missing nine-year-old girl who vanished from the Blue Mountains last week.https://t.co/H2FabY638o

Police have been searching for her for four days with a 32-year-old man arrested at a unit in Surry Hills, Sydney last night.

He has been charged with murder and will appear in court today.

9News reports NSW Police also carried out a search at Colo River, located about an hour from the Blue Mountains, last night.

Mamamia is unable to name the girl as she is an alleged victim of crime. NSW law prevents media from identifying underage victims of crime.

Australia has suffered its deadliest 24 hours of the pandemic.

A record 77 deaths have been reported from COVID-19 across New South Wales, Victoria, Queensland, South Australia and the ACT.

It's the highest daily toll of the pandemic for Australia with 36 of those deaths in NSW.

While COVID-19 cases numbers have "stabilised" in NSW, the state's chief health officer is again stressing the importance of vaccine boosters as the outbreak death toll climbs.

Chief Health Officer Dr Kerry Chant stressed more can be done to bring those statistics back down, pointing out that just a handful of the 36 people who died were triple-vaccinated.

"There needs to be a sense of urgency in embracing the booster doses," she said.

Adding in approximate booster eligibility for each state and territory #c19chart pic.twitter.com/tLCSHKtM6J

Victoria recorded 22 deaths and has now enacted a 'code brown' emergency in the state's hospitals, in Queensland 16 people have died from COVID-19, two deaths were recorded in South Australia and one woman has died in the ACT.

IVF to resume in Victoria after fury at government pause.

On Tuesday a 'code brown' emergency was announced as the state's hospital system buckles under COVID-19 admissions and staff shortages.

The order, which comes into effect at midday on Wednesday, applies to all public metropolitan hospitals and six regional hospitals in Barwon, Ballarat, Bendigo, Shepparton, Albury and Latrobe.

Non-urgent elective surgeries were suspended in public and private hospitals in Victoria on January 6 to cope with rising COVID-related admissions.

As part of the change, IVF clinics were contacted and asked to cancel appointments.

But with the ban set to last three months, Victorians have shared their distress at not being able to "pause" their bodies.

Acting Health Minister James Merlino has since said the government would allow IVF clinics to resume their full services "as quickly as possible", but refused to provide a time frame.

NSW Premier Dominic Perrottet says rapid antigen tests will play a role in the government's strategy to get kids back to school for term one as the state's COVID-19 situation worsens.

"We see a role of rapid antigen tests ... as we open up schools ... and that's why we procured here in NSW tens of millions of them," Mr Perrottet told reporters in Sydney on Tuesday.

More details would be provided after NSW met with other states and territories at national cabinet on Thursday, he said.

Kits would be distributed to parents, who would then supervise their children's testing before the start of class.

However, there are concerns over the number of kits required for the plan to roll out, with about 24 million RATs needed for Term 1: https://t.co/OSIt6Tq0df #9ACA

As the situation worsens, only about 14 per cent of children aged five to 11 have received a COVID-19 vaccine dose, stoking concerns about school safety as term one looms.

Under the plan reportedly being considered by the government, students would be asked to take RATs at home twice a week to help manage the spread of the virus.

With about 1.2 million school students in NSW, it would mean using about 24 million of the hard-to-find kits over a 10-week term, the Sydney Morning Herald reports.

Meanwhile the federal government has blasted Nationals MP George Christensen after the Queenslander said "do not get your children vaccinated" against COVID-19.

The backbench MP claimed the government's program to vaccinate children aged 5 and above was "nuts".

Prime Minister Scott Morrison has responded with, "I strongly disagree with the message sent out by Mr Christensen regarding children's vaccinations. It is contrary to the official professional medical advice provided to the Government.

"I urge parents to disregard his dangerous messages in relation to vaccines."

All the homes on one of Tonga's small outer islands were destroyed in the massive volcanic eruption and tsunami, with three people so far confirmed dead, the government says in its first update since the disaster hit.

With communications severely hampered by an undersea cable being severed, information on the scale of the devastation after Saturday's eruption - causing waves up to 15 metres high - has so far mostly come from reconnaissance aircraft.

But the office of Prime Minister Siaosi Sovaleni said in a statement that every home on Mango island, where about 50 people live, had been destroyed, only two houses remained on Fonoifua and Namuka island had suffered extensive damage.

🇹🇴First images from surveillance planes flying over Tonga reveal “catastrophic” and “extensive” damage to villages in low-lying coastal parts of the archipelago.

Tonga's deputy head of mission in Australia, Curtis Tu'ihalangingie, earlier said pictures taken by the New Zealand Defence Force (NZDF) showed "alarming" scenes of a village destroyed on Mango and buildings missing on Atata island, which is closest to the volcano.

Sovaleni's office said a 65-year-old woman on Mango Island and a 49-year-old man on Nomuka Island had been killed, in addition to a UK citizen whose death was confirmed on Monday.

Tonga is expected to issue formal requests for aid soon but in the meantime New Zealand said two ships, HMNZS Wellington and HMNZS Aotearoa, had set off with water supplies, survey teams and a helicopter.

- UK Prime Minister Boris Johnson has denied an accusation by his former adviser that he lied to parliament about a lockdown party, saying nobody had warned him the "bring your own booze" gathering might contravene COVID-19 rules.

- The French Open is next up on the grand slam calender, but the country has declared there won't be any exemptions from France's new vaccine pass law, meaning Novak Djokovic won't be defending his title there, either, after being deported from Australia for not being vaccinated.

Reply
Upvote
2 upvotes
I think after little Cleo and the other little boy who was found last year, I was hoping that we'd get another happy ending. Poor kid. I will never understand how people can be so cruel to children.
C
cat 4 months ago