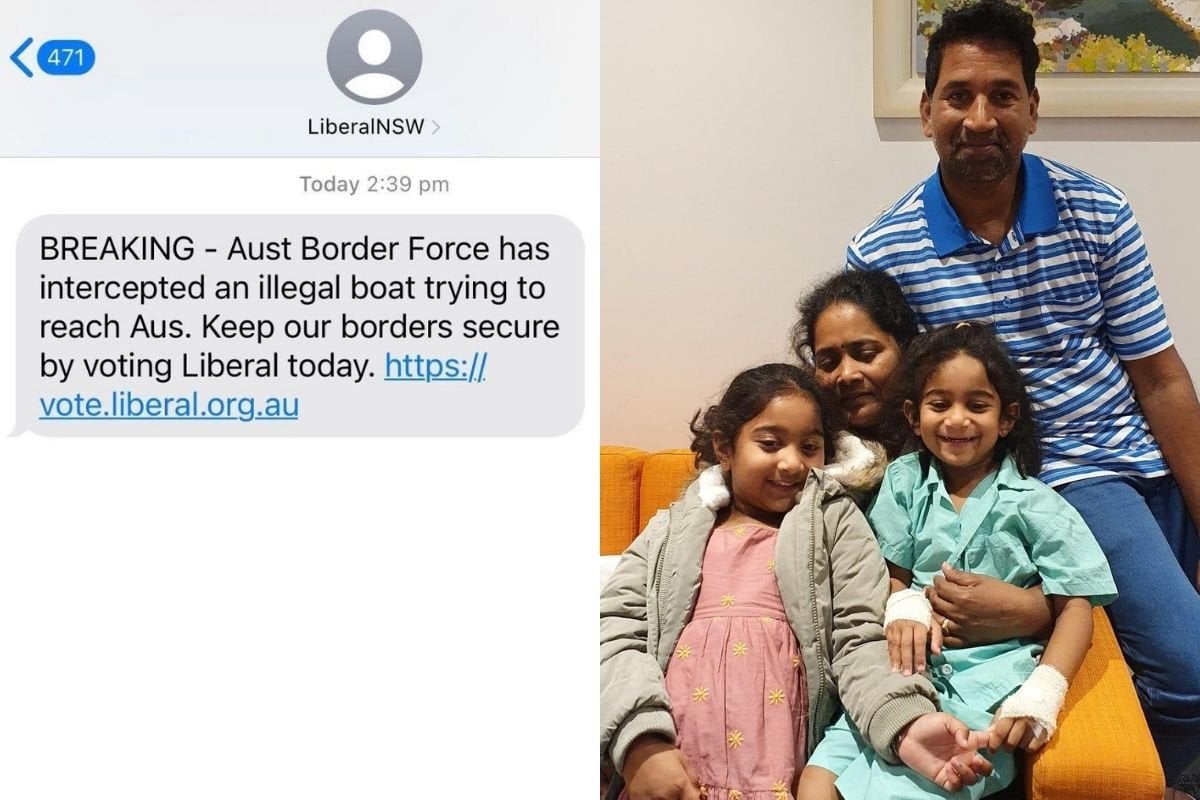 When you think of an 'illegal boat,' what image does it conjure up?

The Morrison government was good at making it seem that way. That boats of 'illegal asylum seekers' were on their way to our shores to steal our jobs and homes.

What that phrase fails to detail is the reality. Those 'illegal boats' are filled with children, mothers, brothers and friends. The emotions they're feeling as they leave their beloved homelands - places where they are no longer safe - are a mixture of fear, terror, sadness, pain and hope.

But for the last eight years, we've had a government that's demonised people fleeing war and persecution in search of freedom. People making a last ditch effort to save their families, by whatever means possible.

On Saturday, the Liberal Party tried to do that one last time.

"BREAKING," read a text message sent out to voters across the country. 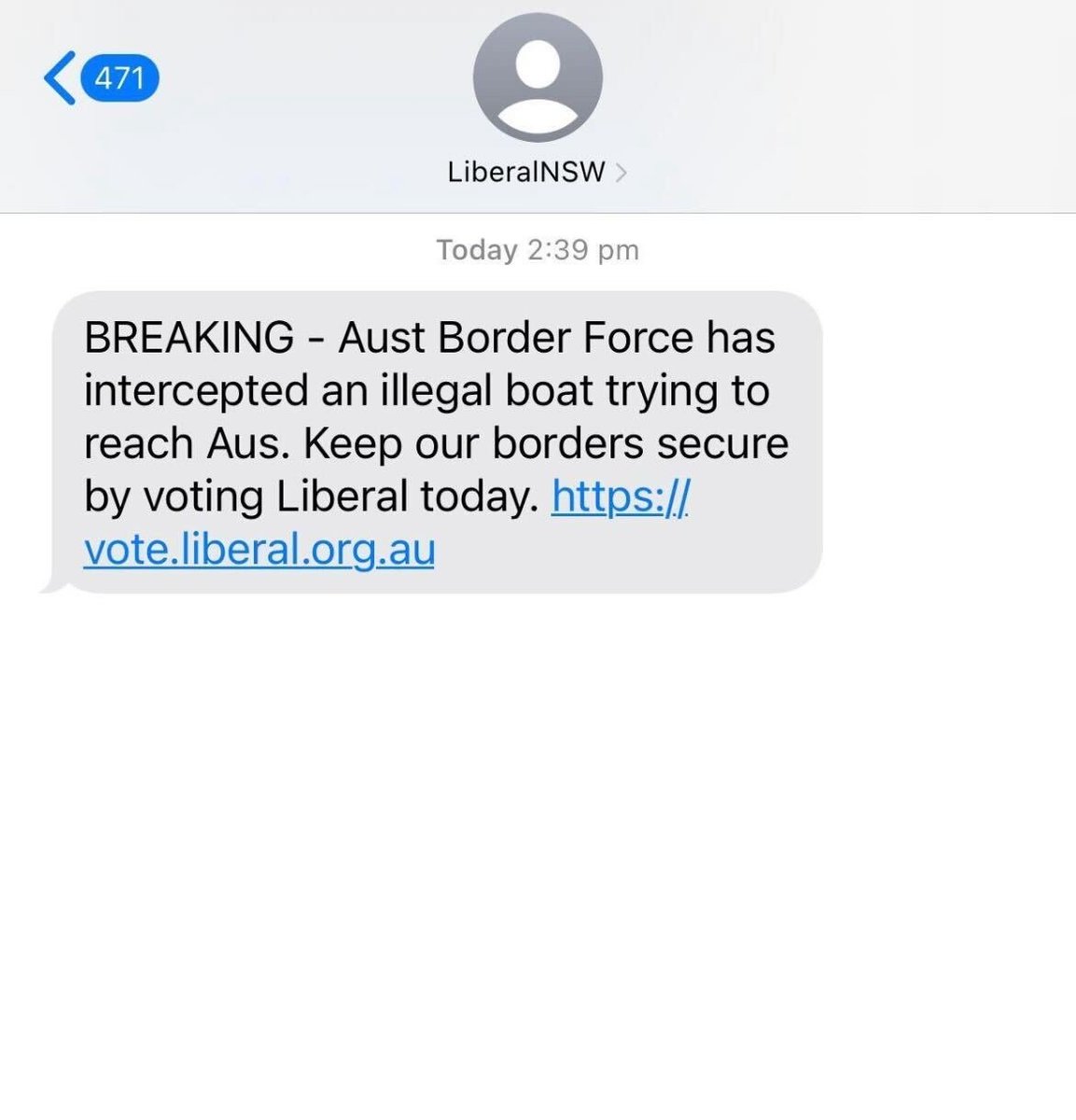 The last-ditch text sent out to voters on May 21.

We've since found out Scott Morrison was behind that text message; he instructed Border Force to publicise the interception on election day.

It didn't work. Morrison and the Liberals were accepting defeat by late on Saturday evening. And oh, what a difference a week makes.

Today we've received long-awaited news. The Murugappan family have been told that they're finally going home to Biloela.

Priya and Nades fled to Australia separately in 2012 and 2013 to escape the horrors their ethnic Tamil minority were being subjected to in Sri Lanka; slaughter, abuse, torture and rape. They met here, married, and had kids. Nades got a job in the town of Biloela, Queensland, and the family set up a life for themselves on temporary bridging visas.

But they arrived here 'illegally' by boat. And for that reason, the former-Liberal government had said they'd never be allowed to stay because they are not "genuine refugees."

When Priya's bridging visa expired in 2018, the couple and their young daughters - Kopika, then nearly three, and Tharnicaa, nine months - were taken into immigration detention, where they have remained for four years. Sent to Christmas Island as the sole residents of the facility in 2019, the family has suffered mentally and physically, as their case has dragged on and on and on.

But despite repeated attempts to convince authorities they deserve to stay, the Liberal government stood firm. The family didn't have a right to be here.

Tonight, the Labor Party has been declared the winner of the 2022 federal election. We congratulate @AlboMP on his victory, be it majority or minority.

Mr Albanese has promised to allow our friends Priya, Nades and their girls Kopi and Tharni to return home to Biloela. pic.twitter.com/7deAfXit9E

In their first week in government, getting the Murugappan family back to Biloela has been a priority for the Albanese government. Why?

Because as Prime Minister Anthony Albanese told ABC Radio National, "you can have strong borders without being weak on humanity."

"This is a family that were welcomed and were a part of the Biloela community, and at a cost of many millions of dollars, have been treated in a way which is not appropriate with Australian values.

"The cost to the health, frankly of these two young girls and their mum and dad — but the economic cost to the Australian taxpayers — has been extraordinary and that is why there needs to be a clear resolution of these issues. The community want this family back to Biloela and that would be an entirely appropriate outcome," he said.

It is time to bring Priya, Nades, Kopi and Tharni home to Bilo. pic.twitter.com/qvM3SdDIba

Labor actually supports the Coalition's Operation Sovereign Borders policy and the retention of temporary protection visas. They will still turn back boats where safe to do so and engage in offshore processing and regional resettlement.

Federal law has always allowed the immigration minister to use his or her discretion to issue a visa to this family. The Morrison government refused.

Former Labor home affairs spokeswoman Kristina Keneally once wrote on Twitter it was as simple as a "stroke of a pen" for the sitting minister for immigration. But the Liberal government didn't want to set a precedent, and so the Murugappans remained locked away at a cost to the government of $6.7 million for their two-year stay on Christmas Island stay alone. They were only evacuated to the mainland when Tharnicaa got terribly ill with untreated pneumonia.

Under Labor we're seeing just how simple it really is to change this narrative.

Because rules are great, but they can also be restrictive and cruel if followed without stopping to see the humans they're affecting.

This particular heartbreak - watching a young family suffer behind bars, when the small town of Biloela wanted nothing more than to have them home - went on long enough. The nation had had enough.

Finally, they will be heading home within a matter of weeks.

Hopefully, this is just the start of making Australia's immigration and asylum seeker policies more humane for everyone.