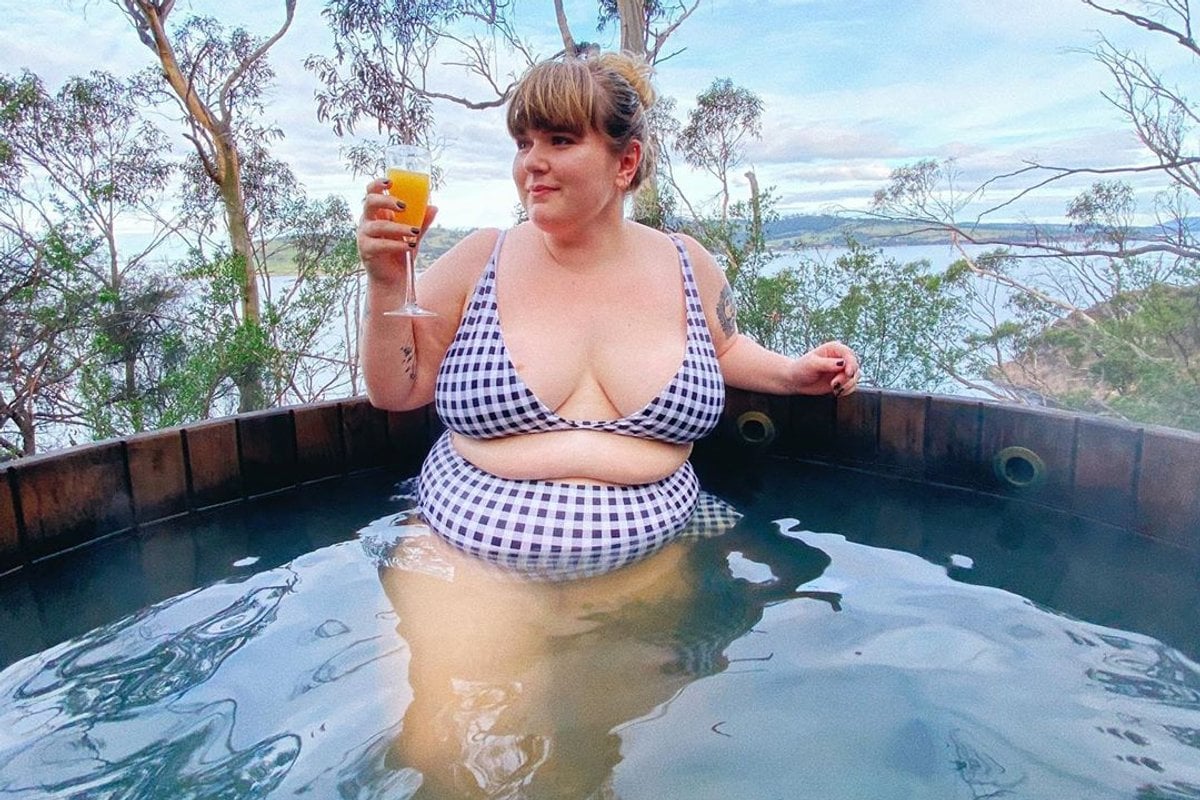 “I'm a happy fat person on the internet, there is nothing that trolls hate more.”

Those are the words of Katie Parrott, an Instagram influencer who is on a mission to be a vehicle for change in commercial fashion and for the lives of consumers.

Interestingly, Parrott prefers the term ‘fat fashion’ to explain her line of influencing, in lieu of the widely used phrase ‘plus-size’.

The influencer explains to Mamamia that whilst she uses many terms interchangeably, such as “plus size, fat, chubby and curvy,” she also takes slight issue with the former.

“In my opinion, the term plus size makes it sound like I live my life as an addendum to people who are a 'normal' or 'straight' size,” she explains. “I understand the need to use the term to differentiate between brands who offer my size and those that don't, and it's certainly the most generically applicable term for the community, but as far as I'm concerned, fat people shouldn't be an afterthought or addendum, we're just as valid and normal as thin people.”

Parrott says that just as she chooses to use the word ‘fat,’ everyone needs to have the freedom to describe themselves as they wish.

“For me, it's been an important journey to de-stigmatise fatness for myself. I am fat. That's not a bad word - it's a descriptive one, like saying someone is tall or short or thin or blonde.”

The model says that whilst ‘fat’ is not a word that all people will want to be described as, she also wants to acknowledge what ‘fat’ does not mean.

“It's really important to remind people that fat is not a synonym for ugly, disgusting or gross.”

Yes, Parrott is on the receiving end of trolls - like all people with a public profile. And as she mentions above, it’s her happiness with herself that hurts the trolls the most. But she knows not to focus on the people who don’t like her, and to instead be a beacon of positivity for those that do.

“If seeing a normal fat body like mine means that just one teenage girl can feel equally as good about her body, then my job is done,” she explains.

Parrott says fashion retailers play a crucial role in the de-stigmatisation of bodies of all sizes.

“There is literally no excuse not to be making plus sizes, unless you just don't want fat people in your clothes,” Parrott explains. “The spread of sizes that any brand offers is a choice and all too often, they choose to exclude plus sizes because fat clothing is seen as an unattractive and an unviable ‘niche’ industry - that frankly is a fatphobic lie. We're here and brands need to get on board or get left behind.”

Despite the lucrative market, there is still only a fraction of clothing brands that offer sizes for all body types. Parrott uses her platform to highlight those brands that do.

“For example, I recently worked with BIG W to launch their Summer collection, which includes a wide range of 100 per cent sustainable swimwear [made with a certified recycled fibre called REPREVE] and caters to all body types... It’s really great to see a major retailer creating products that reflect the needs of all types of women.”

#AD When I'm accessorising my summer outfits, it's all about the fundamentals - sun safety, practicality, and looking cute! I've put together my perfect beach bag/summer day bag with all the essentials, and the best this is that everything you need can be found from your local @bigwaustralia • Beach Bag • Wave Zone Reversible Beach Towel • Cancer Council SPF50+ Sunscreen Burts Bees SPF15 Lip Balm • Cancer Council Polarised Sunglasses • &me Widebrim Hat • Slide Shoes • A great book - I'm reading All Our Shimmering Skies by Trent Dalton #bigwsummer #bigwaustralia

With summer on the horizon, Parrott is reminded that around this time, every year, the phrase ‘bikini body’ rears its head, often used in a way that suggests women should transform their body or ‘tone up’ before putting on swimwear.

As Parrott says, “the phrase bikini body is just part of the global diet industry that wants to make you feel bad to sell you something.”

"Is there ever a time that phrase is used that isn't associated with selling you a fitness program, gym membership, diet plan or supplement? The diet and fitness industry is worth billions upon billions of dollars, and only exists if you feel bad about yourself... There is no such thing as a "bikini body", everyone with a body can wear a bikini."

Whilst Parrot is a proud supporter and advocate of the body positivity movement, she also sees the beauty in the body neutrality movement - the philosophy that we should move away from putting any emphasis on what a body physically looks like.

"Body positivity, in its original meaning, was a radical movement started by black women to de-stigmatise marginalised fat bodies. It has definitely lost its way since then - I'm looking at you, thin women hunched over and pinching at skin folds in the name of being body positive. So the idea of body neutrality has stepped in to fill the gap for all people.

"Sometimes jumping from hatred to love is just too big of a move for people - but moving from hatred to acceptance, or hatred to neutrality, well that's a lot more accessible. There is something very freeing about not thinking about your body at all."

M
mystal84 a year ago