In breaking meteorological news, it’s June in Australia and the weather is proving rather cold.

Therefore, going out is cancelled, and we instead recommend replacing the frosty outside world with the safe confines of your living room.

To help, we’ve compiled the seven best Netflix series you can devour in one weekend or less. We’ve got seven series spanning a range of genres, with the exact time it’ll take you to binge your way through each show — from a hefty 16-hour marathon of Good Girls, to the satisfying sub-five-hour binge that is Dead to Me.

So chuck on your PJs, or snuggie, and get ready to couch potato your way through the weekend.

Tales of the City

One season with 10 episodes, with a runtime of 46-60 minutes each episode.

This new Netflix series is a remake of the famous 1993 Tales of the City series, which was applauded for its portrayal of gay and trans issues. This updated version deserves the same. It sees one of the original characters from the show, Mary Ann Singleton (Laura Linney), return to the queer haven that is Barbary Lane in San Francisco, where she is confronted with the dramas of her past. There, she comes face-to-face with her ex-husband, Brian Hawkins, and their daughter Shawna, who she abandoned in lieu of a career on the east coast.

Watch the trailer for Tales of the City here...

One season with 10 episodes, with a runtime of 53-61 minutes each episode.

Think Gossip Girl meets Lord of Flies. A town of wealthy teenagers are left alone to devise a new world order after the parents and adults all seemingly vanish.

The Society is equal parts gripping and a little trashy. AKA the perfect weekend binge.

Watch the trailer for The Society here...

One season with 10 episodes, with a runtime of 26-33 minutes each episode.

Christina Applegate (Jen) and Linda Cardellini (Judy) unite in the emotional rollercoaster of a series that is Dead to Me.

The volatile, hot-headed and grieving Jen has just lost her husband to a brutal hit and run and Judy - a seemingly quirky, free-spirit - is directly linked to the crime. Despite this, the unlikely but endearing friendship of Jen and Judy outshine the show's many twists and turns.

You won't know who to love, hate or root for, but we guarantee you'll enjoy the (messy) ride.

Watch the trailer for Dead to Me here... One season with seven episodes, with a runtime of 27-30 minutes each episode.

Although, the second season of The Let Down is currently playing on the ABC, you can catch up on the first season of the show about imperfect mums which has won the hearts of women Australia over.

The series is set in Sydney and follows the story of several new mums who meet at parent's group (the politically correct term for mother's group, as the show snidely reminds us). From incontinence, to letdown reflux, and sleep deprivation, The Let Down documents the trials and tribulations of being a new mum from a deeply funny, yet grounded point of view.

And at just under three and a half hours, it's perfect for a short, snappy binge which you can pair with another series.

Watch a snip from The Let Down, Season 1, Episode 2: 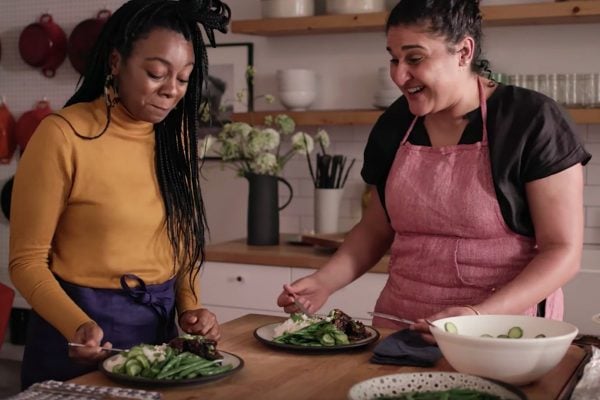 One season with four episodes, with a runtime of 40-48 minutes each episode.

Salt Fat Acid Heat hosted by chef, New York Times writer and best-selling author, Samin Nosrat, will have you thinking about the four basic elements of cooking with a whole new sense of appreciation. Each element has its own dedicated episode which explores how they enhance any and every dish from a simple bowl of pasta to a Michelin star feed.

Not only is it fascinating, Nosrat's bubbly on-screen presence makes this foodie series completely unintimidating and really cements the pure joy of food.

Best watched with a side of Uber Eats and a glass of wine.

Three seasons with 37 episodes, with a runtime of 21 to 23 minutes each.

This hilarious comedy starring Kristen Bell, Jameela Jamil and Ted Danson, alongside a stellar, sit-com cast, is guaranteed to have you chuckling.

Eleanor (Bell) wakes up to find herself in the 'Good Place', a heaven-esque afterlife where everything is seemingly perfect, however there's been a mistake. While Eleanor shares the same name with her Good Place counterpart, she couldn't be less like the human rights lawyer she's pretending to be.

Instead, the real Eleanor is a rude, selfish former pharmaceuticals sales rep with no regard for other people, however she attempts to make amends, with 'attempt' being the key word. Two seasons with 23 episodes, with a runtime of 40-45 minutes each episode.

It's the TV show that's been described as Breaking Bad meets Desperate Housewives, with Mad Men's Christina Hendricks as the series' lead.

Hendricks' character is accompanied by her two suburban housewife sidekicks, as they juggle their newfound life of crime and money laundering with school lunches and maths homework.

Expect punchy dialogue, loveable characters and a supermarket heist with many consequences.

Other non-Netflix binges also worth a watch:

The best series to watch on Stan:

The best series to watch on Amazon Prime Video:

What are you favourite shows to binge? Did we forget any series? Tell us in a comment below.

American Women on Stan. Alicia Silverstone and Mena Suvari star. It’s set in the 70’s, and has a great storyline of a newly found single mother of two, who is being empowered by the rise of Second wave feminism. Loving the clothes, hair and women, and storyline. Nice short episodes too for easy viewing.☺️