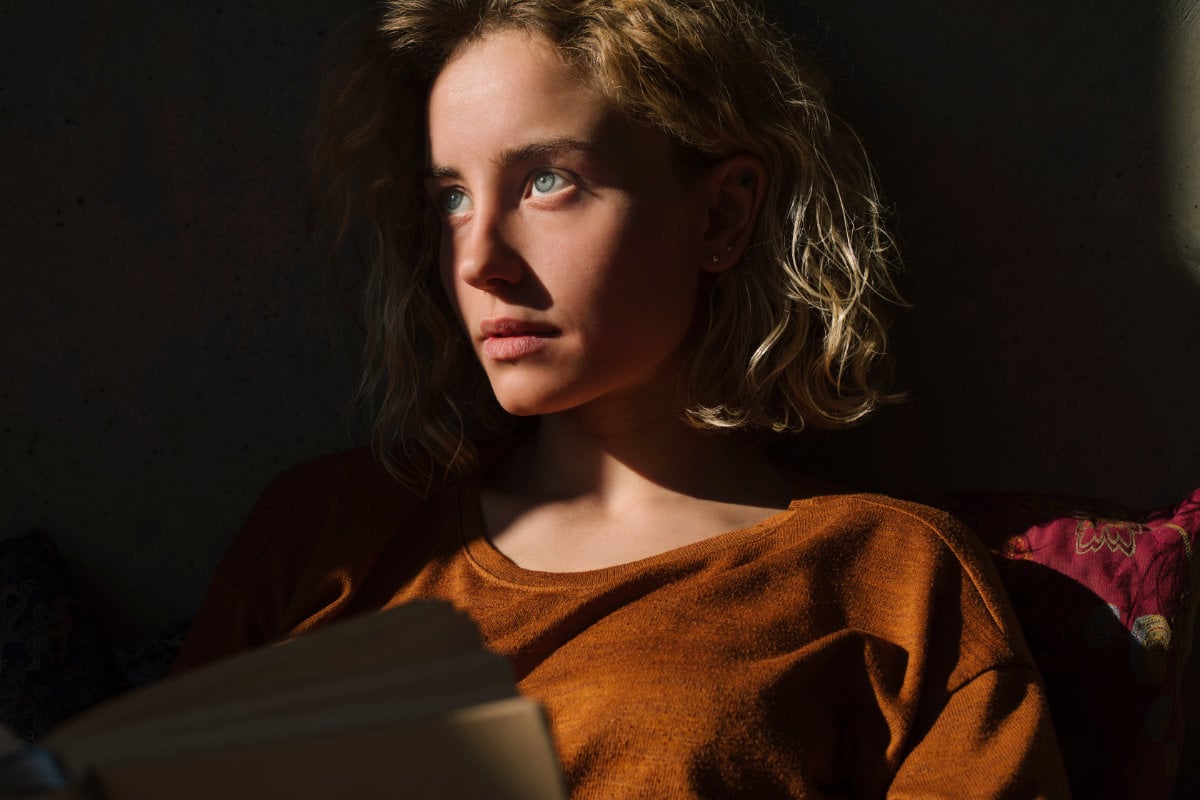 The feature image used is a stock image. This subject of this post is known to Mamamia and has chosen to remain anonymous for privacy reasons.

When I tell people that I'm an empath I usually get one of two reactions: they either roll their eyes because they don’t believe it's a real thing, or they have no idea what I mean. No idea what being an empath really is.

Being an empath doesn’t simply mean I have empathy, it means I feel everything. I am highly sensitive to my own emotions but also to people's emotions around me.

I can understand any point of view or perspective shared with me, and can put myself in that person’s metaphorical shoes, no matter their background or who they are.

Sometimes it's even characters in a film or TV show. I get angry with them, upset when they cry, feel guilt when they do. Now, I research a film before going to the movies, to ensure the storyline doesn’t involve anything too intense. I need to protect my own emotions and the way it drains me.

It can be the subtlest of things, from body language shifts to changes in a person’s facial expression or tone of voice. I pick up on it all. I can sense their mood and their emotions just being in a room with them.

On one hand it's a positive ability to have, because I can relate deeply to people and that can be beautiful. I've developed strong friendships and relationships because I can connect with others and truly comprehend what they're experiencing.

But because of this, being an empath is also a curse. It completely drains my soul.

When I was a child I knew I was different to other people in the way I felt things and experienced emotions, I just didn’t have a name for it.

Teachers, friends and kids at school often called me “over-sensitive” and said I needed to stop worrying so much about other people and just focus on myself. I was told to “toughen up”; they just couldn’t understand how encompassing this quality is, like it’s a switch I can just turn off when I want to.

It wasn’t until I was a teenager that I knew it did have a name: that I was an empath. It was my grandmother who first said it to me; she said she was exactly the same at my age and that others just didn’t understand it.

For years she was like my spirit guide. I could rely on her for support, as an ally, until she passed away in my early twenties. Since then I have sought the help of psychologists to try and manage my empathy, but it's still so difficult because it's inherent in who I am.

For a long time, I didn’t mind being the go-to person, the friend that provides an ear and listens to the problems of others. From relationship breakdowns to career or job hurdles, health problems, and even more trivial issues like a bad haircut, I was on the receiving end of it all and I was glad I could help.

But as I've grown older, I have found myself fatigued - literally exhausted from being this person. Especially lately, when it seems like everyone around me has been legitimately struggling.

The problem is, being an empath, I don’t want to tell anyone how I am feeling because I don’t want to make it worse for them. So I don’t. I internalise my feelings and absorb theirs like a sponge.

I've had family, friends and colleagues call me - even people that I haven’t heard from in years. They've shared with me their redundancies, their psychological struggles as they isolated at home, the difficulty of managing working from home and their children’s remote learning, that they can’t visit their family interstate or overseas... I have listened as I always do, taking on their intense emotions.

One friend of mine shared with me about the loss of her grandfather while in the peak restriction period of isolation. She wasn’t able to attend his funeral, to say goodbye in his last weeks.

Every day she would call me, often in hysterics. I would listen for hours, and each day when I got off the phone I too was hysterical, invisibly mourning her loss alongside her, feeling every morsel of guilt, grief, loss and anger that she felt.

But unlike my friend, when she hung up and felt a little better for sharing it with me, I felt worse. I couldn't offload the pain to anyone else. And that's the constant burden.

I know many would say just don’t answer the phone, don't respond, but for empaths like me this isn't an option. You can’t switch off, you can’t say no - it just isn’t who we are. And it's becoming harder and harder to deal with, every day.

Reply
Upvote
People think we are selfish because we spend so much alone time, but people drain me. And when I am alone, I can recharge. It does stink being an empath. I can feel other people's thoughts. I got my oil changed the other day, and on the back wall, there was a small sign that said we retain the right to refuse service to anyone. I told her that I had to do that one time with a mean customer, and then she proceeded to tell me how that very day before I came in, they had to call the cops on an irate customer, and her company wound up banning them nationally. I have read things like this many times, I seem to know these things. Part of me likes being an empath, and part of me does not.
E
evertrue 2 years ago

Reply
Upvote
I'm so sorry that you are dealing with this. Unfortunately as a fellow empath I am all too familiar with what you're going through. I've read some of the other comments and I must say it is vital for you to protect yourself. If you are not strong enough to tell someone that you cannot take their burden you must limit your interaction with them for your own health and well-being. Those people are called vampires. They sense your ability even if they don't understand it consciously. There are some tools you can use you can Google them. Like imagining a bubble around yourself and not letting others emotions touch you. The bubble stretches like elastic and you literally bounce those emotions back as they come to you. It takes practice it does work though. I think mostly because you're making a conscious decision not to accept other people's burdens. But it is critical for you to limit your interaction with people who only take from you. And you know who those people are by how you feel afterwards. Do you feel uplifted or do you feel exhausted. Unfortunately if you do not make these changes you may become a vampire yourself forced to take to get the energy back from other people that was taken from you. And I don't know any empath that wants that for themself.
Resources
Very Peri
News
General
Opinion
True Crime
Politics
Sport
Explainer
Entertainment
Celebrity
Reality TV
Movies
TV
Books
Rogue
Royal
Lifestyle
Beauty
Fashion
Weddings
Home
Wellness
Health
Fitness
Travel
Food
Family
Before The Bump
Pregnancy
Baby
Kids
Teens
School
Parent Opinion
Work & Money
Money
Finance
Career
Lady Startup