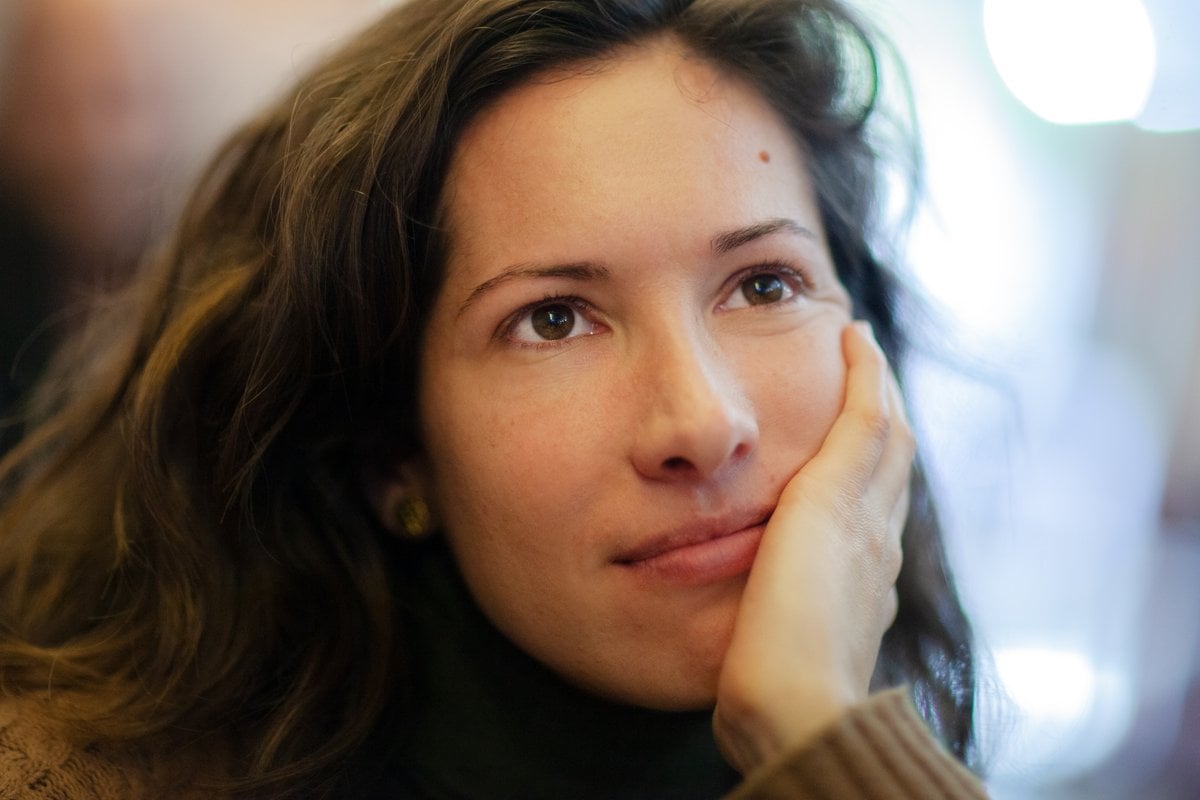 We’ve all seen the ads.

Two photos are juxtaposed on the screen. On the left is a candid shot in poor lighting. The face looks strained, insecure. The smile, if present, is faint and closed.

To the right is what appears to be the same person, only new and improved! Slimmer and, we are expected to assume, healthier. But that’s not all. The hair is styled, the clothes new. The light is just right, as is the angle from which the photo is taken. The wide smile reveals gleaming teeth.

Watch: Here's how to get a beach body. Post continues below.

Diets, detoxes, exercise systems — even the most research-based programs with demonstrated long-term efficacy  — all use the same formula to convince people to buy what they’re selling. And of course they do. We shop with our eyes first.

An "after" photo is evidence that what they’re offering works. I don’t know about you, but I’m a lot more likely to shell out my hard-earned money on something if I’ve seen some proof of concept, even if the asterisk does say results not typical.

But while this "before and after" format is a tried-and-true marketing strategy, its very premise is flawed. In fact, the whole idea of an "after" photo is doing active damage to people everywhere.

Chasing the "after" photo leaves us exhausted.

I was in my twenties, and I’d spent the previous two years gaining a great deal of weight and then losing it all plus some extra.

At this point I had already completed two triathlons and was training for a third. I was feeling fit and strong and confident.

The topic of my weight came up in conversation over drinks with some friends, and I mentioned how proud I was of myself for all I’d accomplished. One of the men in the group, Mark, raised his eyebrows. "I dunno. You could still stand to lose a couple more kilos."

So much for those feelings of pride and confidence.

I have never felt my body was good enough.

When it was thin, my muscles were not well-defined enough. When it was fat, it was prone to injury, evidenced by the surgical scars lining my knees and feet.

Even at my peak as an endurance athlete, Mark and others like him would have me believe there was something inadequate about it.

As an adult, my body has changed countless times.

I’ve been an athlete and a couch potato. I’ve had three babies and dealt with the body changes and body image issues that accompany pregnancy and the postpartum period in all their hormonal glory.

I’ve taken dozens of "before" photos, artifacts of times I’d had enough and decided to finally do something to make myself feel better in my body. And for most of the last 20 years, I’ve exhausted myself chasing the storied "after" photo.

Because, despite what those nutrition or exercise or weight loss companies would have us believe, there’s no such thing as an "after."

We have no idea how "after" will look on us.

I’m in an exercise program at the moment.

I’ve seen great success with it, because it addresses my thoughts and feelings about food and gives me the opportunity to develop healthy habits around eating. But my trajectory has been rocky.

Every day, I weigh myself and put some clothes on. Then, I turn sideways in the mirror.

Each time I look in the mirror, I see all the ways I’ve failed to reach my "after."

My vision of that ideal version of my physical self, though, isn’t based in my own reality at all.

Since I’ve never been happy with my body, I’ve got no reference points of my own. I only see what those other people look like in their "after" photos. Narrow hips, slender arms, flat stomach  —  maybe even a six-pack!

The truth is, I have no idea how those things will look on my body.

Idealising the "after" is harmful and misleading.

The assumption that looking a certain way is somehow equivalent to being healthy and happy is flawed at best and dangerous at worst.

As someone who’s been all different sizes and shapes and (with the exception of those few minutes in 2006) never been happy in my skin, it’s clear to me there’s not a secret packet of happiness in my brain that unlocks when I reach a certain number on the scale or tape measure.

And as an eternal self-critic, I’m pretty sure, no matter how the curve of a certain body part looks in the mirror, I’m capable of finding flaw without much effort.

And as for health  —  well, that’s a very complex beast.

Sure, physical health can be affected by weight. But don’t let the fat-shaming media fool you: There are also plenty of people who identify as fat and do not suffer major health issues.

There are lots of reasons someone might carry around more weight, and assuming someone is unhealthy just because they weigh more than society says they should only serves to marginalise people for the way they look.

Speaking of society, another problem with the "after" photo is that it suggests there is a certain acceptable way to look.

Once you look like the actors on your favourite television shows or movies, who with few exceptions are lean and toned (and, by the way, whose job it is to maintain a certain look and who are able to devote a considerable amount of time, energy, and money to training and eating a certain way), then you look "right."

Though we’ve made some progress, there still seems to be little leeway in our current culture for what healthy can look like.

Most important of all, though, is that even someone who has achieved the desired look can have serious dysmorphia and dysfunction around food and their body.

No matter what weight I’ve been, two things have always been true.

First, I always believed I was fat. Second, I always struggled with my relationship with food.

Until I can fix my relationship with food and the way I see my body, I’m not going to be healthy.

There is no "after".

I’m a product of my culture, and I’ve internalised a lot of fat shame, body idealisation, and misogynist messaging over my lifetime.

I’m working on it, but I can’t promise I’m ever going to be able to look in the mirror and be truly satisfied, no matter what shape looks back at me.

Sure, I can be happy with what my body has done for me and enabled me to do. But I’m likely still going to push and pull and poke and smooth and criticise.

I’m still going to take progress photos and compare them to the before.

But I no longer believe there will ever be an "after" photo. Because even if the day comes that the image in the mirror has all the objective physical traits I associate with my ideal self, I’ll still find something to criticise.

And, importantly, I won’t be finished.

Each day I can choose to honour my body. By moving it, by resting it, by fueling it, by treating it, by working to make it feel as good as it can, by loving it for all it’s done for me.

Each day I will need to continue in my effort to balance the way my body looks with the way it thinks and feels.

To put more emphasis on being healthy and strong and, just, here with my family and friends. To work on feeling in control even when life has wrenched me sideways and backwards.

Each day, instead of looking in the mirror, I can close my eyes and take a deep breath, remembering that my real worth has nothing to do with that piece of reflective glass.

My health journey began long before smartphones, but the first "before" photo I have a record of is from about six years ago.

I've taken dozens since then, but there's no way I'd be able to place them in any logical order. Life is just not that linear. In some of them I’m pregnant; in some I’m breastfeeding; in some I haven’t exercised in years; in some I’ve been exercising regularly for months.

And in all of them I look like me. I am the same person, still worthy of love, still flawed and perfect.

Each snapshot you take is a snapshot of where you are right now. From here you might go anywhere. You might lose some fat, gain some muscle, get pregnant, get sick.

So instead of chasing what you want to look like at some mythical endpoint, ask yourself: What am I doing today to feel happy and healthy in my body?

And if you’re feeling happy and healthy in your body, tell your inner critic  —  and your outer Mark  —  to keep their commentary to themselves.

Nicci is an author, teacher, and mother living in Boston with her husband and children. Some of her hobbies are singing in the car, escaping from rooms, dreaming about a full night’s sleep, and perpetual cleaning. Along with sharing personal stories from all corners of her life, she writes books and short stories. Look for her debut novel, tentatively titled The Other Women, coming in 2022. For more from Nicci, you can follow her on  Facebook, Instagram, and  Twitter on @kadilakwrites, or find her at her website:  http://niccikadilak.com/