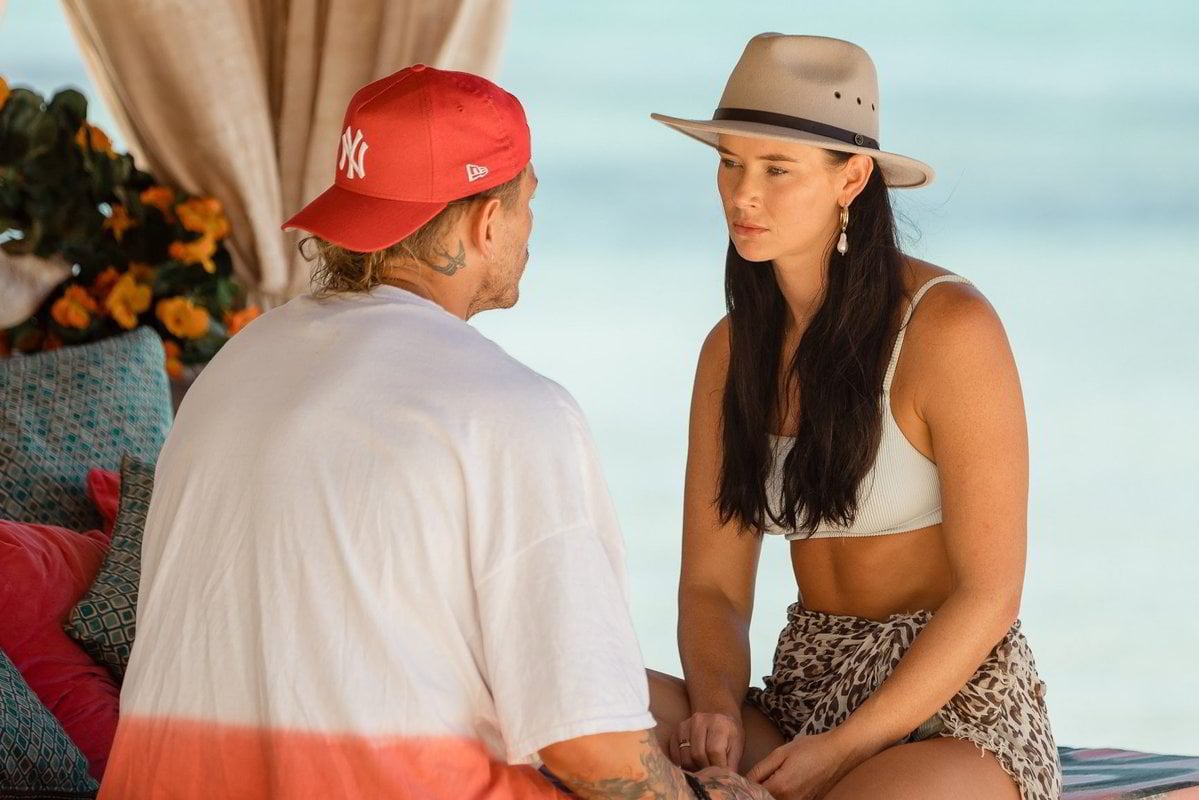 On Monday night's Bachelor in Paradise, Timm Hanly asked Brittany Hockley to leave with him.

She agreed, and... off they went without saying goodbye to anyone. Seriously, no one even seemed to notice. There was literally no word of their exit for the rest of the episode. ¯\_(ツ)_/¯

Timm had told Britt being in paradise didn't bring out the best in him, the night after he got into a wee bit of a fight with Matt Whyatt because Matt... is dating his friend Ciarran's... ex-girlfriend. Now that we think about it, why did Timm care so much? It literally didn't involve him.

"I'm just not feeling myself and I need to get outta here. I don't need to wait around. If anything, Paradise is going to bring me unstuck," he said on camera the following morning.

"At the end of the day I've come here to find a connection. I found a connection with Britt, and I want to take her with me now. Because I can't see us growing in this environment. I think I want to go out into the big wide world and do it with her. I'm just scared she won't want to come with me."

Well, Britt did want to go with him. They packed their bags on the spot and walked out of the resort never to be seen again.

#BachelorInParadiseAU Did Timm and Britt just cease to exist? pic.twitter.com/3MNq5xwlHT

It came across pretty wholesome and uneventful but it turns out there may have been another very juicy reason Timm left.

Timm was actually booted from the show.

According to So Dramatic! podcast host Megan Pustetto, Timm was actually kicked off the show but it was made to look like it was his own decision.

Timm "got kicked off the show for making a producer cry. He was being a diva, a total nightmare for production during filming, wouldn't do the simple things they asked. He gave them constant attitude," she said.

Production allegedly decided to let Timm make it look like he left by choice, as they were over his "diva antics".

Pustetto also claimed Timm had pursued Britt from the start due to her public profile, as she was one of the biggest names in Paradise and he thought it'd get him a lot of screentime.

Timm denied this in a statement to the Daily Mail, but in another podcast episode Pustetto said her sources were sound and included Timm's ex (or maybe his non-ex... more on that below).

Timm and Britt after Paradise.

In an interview with Mamamia following her exit from the show, Britt said Timm's personality completely changed after they returned to Australia.

"We literally saw each other once and he was just a different person," she said.

Pustetto said on her podcast Britt discovered Timm had cheated on her during a Queensland club appearance, ending their relationship.

Or maybe the breakup had to do with Timm's apparent long-term girlfriend?

Last month, Timm was seen out and about in Melbourne with a woman who was quite clearly not Brittany.

And just when you thought this couldn't get more juicy, it seems the ~mystery woman~ has been idenitifed as his on-and-off ex-girlfriend Briana De La Motte.

According to the So Dramatic! podcast, Timm supposedly broke up with Brittany after they left paradise and later got back together with his ex.

"Timm and Brittany are not together [anymore]. They left Paradise together, but Timm ended things with her a few weeks after that, and she was devastated," Pustetto claimed.

Pustetto said Timm had recently moved out of his house with Ciarran and into a new place... where he claimed to live alone, BUT Briana's dog regularly featured in his social media posts.

She also claimed Timm went on a date with another woman about three weeks ago, around the same time the paparazzi photos of him and Briana were taken.

Look. We're still coming to terms with the fact Ciarran is not who we thought he was, and now we're having to learn this about Timm too.