Aboriginal and Torres Strait Islander people are warned that the following contains images of deceased persons.

The image of the monument tumbling into the city's harbour was splashed across front pages around the world; an evocative symbol of the anti-racism movement that's swelled since the death in custody of African American man George Floyd last month.

Asked for his thoughts about the statue's destruction and the possible removal of a London monument to Captain James Cook, Australian Prime Minister Scott Morrison made a strange claim: that Australia has no history of slavery.

"When you’re talking about Captain James Cook, in his time, he was one of the most enlightened persons on these issues you could imagine. I mean, Australia when it was founded as a settlement, as New South Wales, [it] was on the basis that there'd be no slavery," he told Sydney radio station 2GB.

"While slave ships continued to travel around the world, when Australia was established, yes, sure, it was a pretty brutal settlement... but there was no slavery in Australia."

This is commonly cited by those who want to distance Australia from the dark history of race relations in the United States — "we're not America," they say. But unfortunately it's not true.

Here's how to have a conversation with someone who denies Australian slavery.

'There was no slavery in Australia.'

Here are just a few examples.

Between 1842 and 1904, more than 55,000 people from more than 80 South Pacific islands were brought to Australia to work as slaves on sugar and cotton plantations in Queensland and northern NSW. Many had been coerced into fixed-term contracts or even kidnapped; a process known as 'blackbirding'.

Aboriginal and Torres Strait Islander people weren't immune either. From the 1860s to the 1970s, men and boys were taken from their homes and forced to work on cattle and sheep stations across Australia. 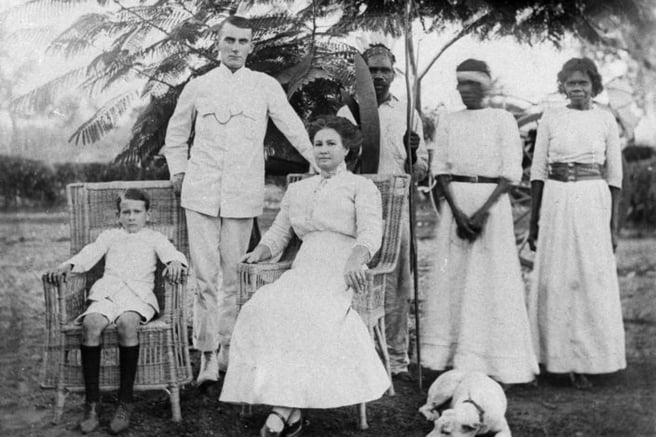 And from the early 1900s, women and girls were forcibly removed from their families, placed in domestic training facilities and then, once they turned 15, dispatched to homes as domestic 'help'.

According to NITV, their weekly income "had an approximate buying power at the time of [one] ice-cream cone or two apples."

'But they were paid.'

Some were, yes. But only at a fraction of their white counterparts, and many were not paid at all.

In Queensland in the 1900s, for example, Indigenous stockmen received just 3 per cent of the wages given to white stockmen — and most never even got to see that money.

That was due to government policies now referred to as Stolen Wages.

Between 1897 and 1972, Queensland law, for example, saw the wages of Aboriginal and Torres Strait Islander workers held in government trust. It's estimated that $500 million has never been repaid.

Similarly, in Western Australia, law allowed the state government to withhold up to 75 per cent of an Aboriginal or Torres Strait Islander person's wage in government trust accounts. That wasn't abolished until 1972.

'But no one "owned" another human being.'

Sadly, that's not true either.

Particularly in the pastoral industry, where some Aboriginal and Torres Strait Islander labourers were bought and sold along with the land they'd been dispatched to work on.

The pearling industry also has a dark past in this regard.

In the late 1800s, Aboriginal men from the Kimberley and Pilbara regions of Western Australia were rounded up and sold as freedivers to captains of pearling boats. Government Resident Colonel E.F. Angelo reported in 1886 some had been advertised at "five pounds a head for anybody, or shoot them for the Government at half a crown a piece", according to the ABC.

The fact that the Prime Minister appears not to be aware of these parts of Australian history speaks to how long and how broadly they were ignored.

But in his own words, "We've got to be honest about our history. We've got to acknowledge the positive and the negative."

The existence and ongoing injustice of Australian slavery must be part of that.