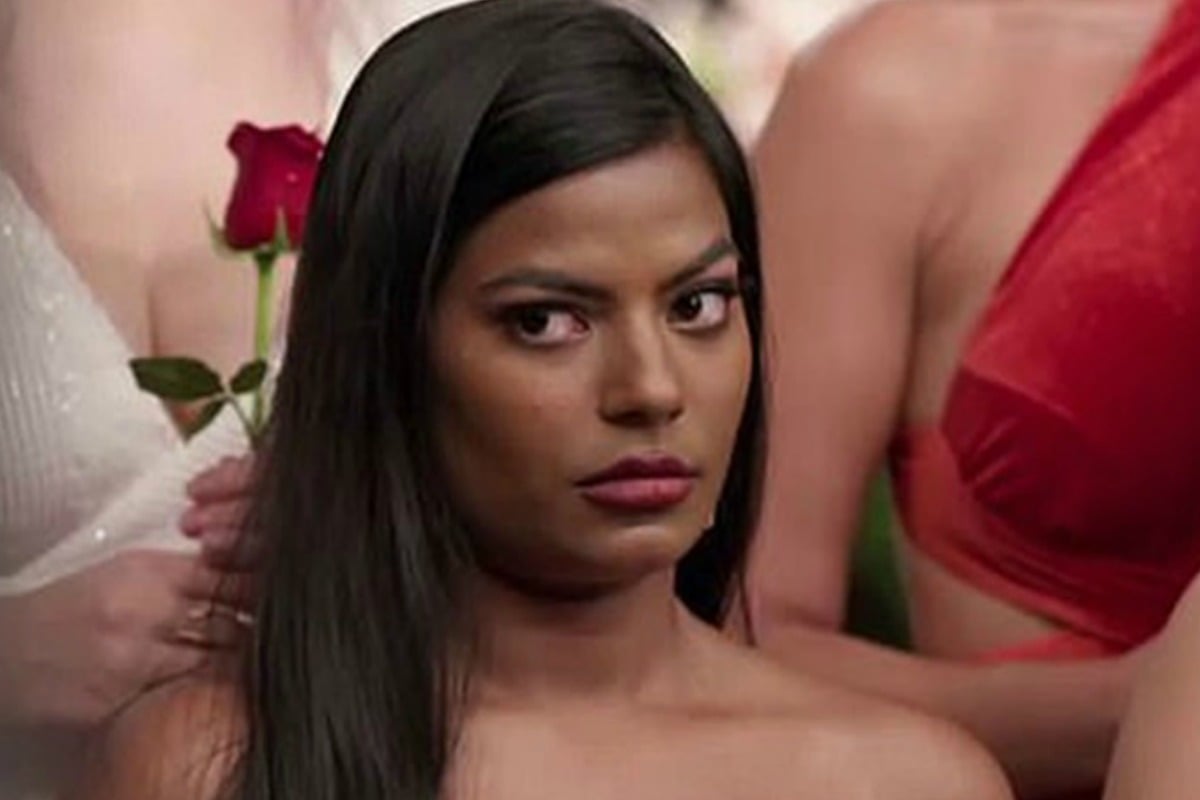 Last night's episode of The Bachelor was a turning point for the franchise.

It was a turning point we had been building towards for quite some time.

Australians have always had a good-natured relationship with The Bachelor and its spin-off series, The Bachelorette and Bachelor in Paradise. We saw the reality TV series as a bit of harmless fun, a source of endless, hilarious memes for our group chats and fodder for some light office banter the following day.

Our relationship with the series was one of reliability and comfort, like that pair of slightly stained old track pants we reach for time and time again.

Each year, we came into the series knowing what we were getting. The first episode would introduce us to the same tropes - the 'wifey', the kooky woman in a costume who would end up jumping in the pool, and the 'villain'.

Over the first few weeks, the villains and the kooks would get their 15 minutes of fame. We would laugh along with the kooks as they awkwardly stumbled their way through group dates and stunted chats with the Bachelor. We would watch the villains b*tch about each other at the cocktail parties and quietly feel relieved that we've left our high school days far behind us.

In the later weeks, we would get to know the 'wifeys'. Inevitably we would collectively fall in love with one 'wifey' only for her to have her heart broken in the finale.

She would go on to become the Bachelorette/an influencer/fade into obscurity, while the chosen woman and the Bachelor would either live happily ever after or announce their breakup on Instagram six months later.

We knew exactly what we were getting going in and we came back year after year, just like we kept reaching for that slightly stained pair of trackies. It was the ultimate comfort show, something you could curl up in front of and lose yourself in after a long day at work.

But over the past few years we've started to feel a little niggle at the back of our minds. We've found it harder and harder to look past the lack of diversity on the series, as another white, straight "traditionally attractive" Bachelor and Bachelorette are wheeled out year after year.

We've found the old reliable tropes harder and harder to stomach, as Women of Colour are increasingly cast as the 'villains' and the 'kooks', while the 'wifeys' are overwhelmingly white.

We've wondered how while the outside world has become progressively more diverse and inclusive, The Bachelor franchise seems stuck in a time warp where a white man falls in love with a white woman and everyone else is just a supporting character.

We've worried about the 'villains' and the 'kooks' and how they're coping after they've had their 15 minutes of fame and Australia's had their fun with them.

Then last night, during the cocktail party, everything came into laser focus.

As Areeba and Kristina turned on Juliette and told her they felt like they had been "betrayed by their own kind", even the most die-hard fans began to switch off.

Suddenly, it wasn't so easy to look past the show's well-trod tropes and cliches. While the Australian public has been begging for greater representation on TV, The Bachelor turned these three Women of Colour into villains, who turned on each other and created a scene which looked like something from a high school playground.

We know these three women probably woke up embarrassed this morning, they're probably receiving hateful messages from trolls, they might regret their 15 minutes of fame.

LISTEN: We need to talk about the ugly side of The Bachelor. Post continues after podcast. ﻿

Last night while watching the scene play out we wondered what has changed - is it us or is it the show?

We've grown up as a country. We're becoming increasingly inclusive and diverse. We're following smart, brave women on social media who aren't afraid to speak their minds. We're not putting up with bullsh*t anymore. We're lifting each other up instead of tearing each other down.

Meanwhile, The Bachelor has continued to serve us up what it knows has performed well in the past. Every season it has upped the ante until it reached a fever pitch last night.

We cringed our way through last night's episode and some of us even switched it off. We took off our old pair of trackies and threw them in the bin, embarrassed that we had worn them for so long.

But there is hope. There's a chance The Bachelor franchise can turn this around. Maybe in 2021, we'll switch on the TV and find a diverse cast of fleshed out characters who aren't pitted against each other? Maybe in 2021, reality TV will catch up to reality?

Maybe we'll buy a new pair of trackies and snuggle up in front of the telly ready to lose ourselves in a new and improved version of a TV show we once loved.

After all, we're living in unprecedented times.

Reply
Upvote
Trash TV is trash?  Who would have thunk it?
C
celinemeister9 2 years ago

Reply
Upvote
3 upvotes
The last few years, i found the women vying for the love the bachelor have become so bitchy and insincere. Areeba, myGod, how can she be there for genuine love? Listen to her and you want to shout on her face to f..off. Also, all those girls, relax. My God, they fight like school girls over a candy. My anger has reached boiling point and i am really not sure (even though people always say that) that it is the producers who need some villains to 'entertain' us. If that is true, dear producers, it is the opposite. I tuned off My Ktchen Rule because of the bitching and unreasonable fights among contestants. Please bring some decency into this program!
News
General
Opinion
True Crime
Politics
Sport
Explainer
Entertainment
Celebrity
Reality TV
Movies
TV
Books
Rogue
Royal
Lifestyle
Beauty
Fashion
Weddings
Home
Wellness
Health
Fitness
Travel
Food
Parents
Before The Bump
Pregnancy
Baby
Kids
Teens
School
Parent Opinion
Work & Money
Money
Finance
Career
Lady Startup
Relationships
Sex
Dating
Separation
Friendship
Family
Real Life
Couples