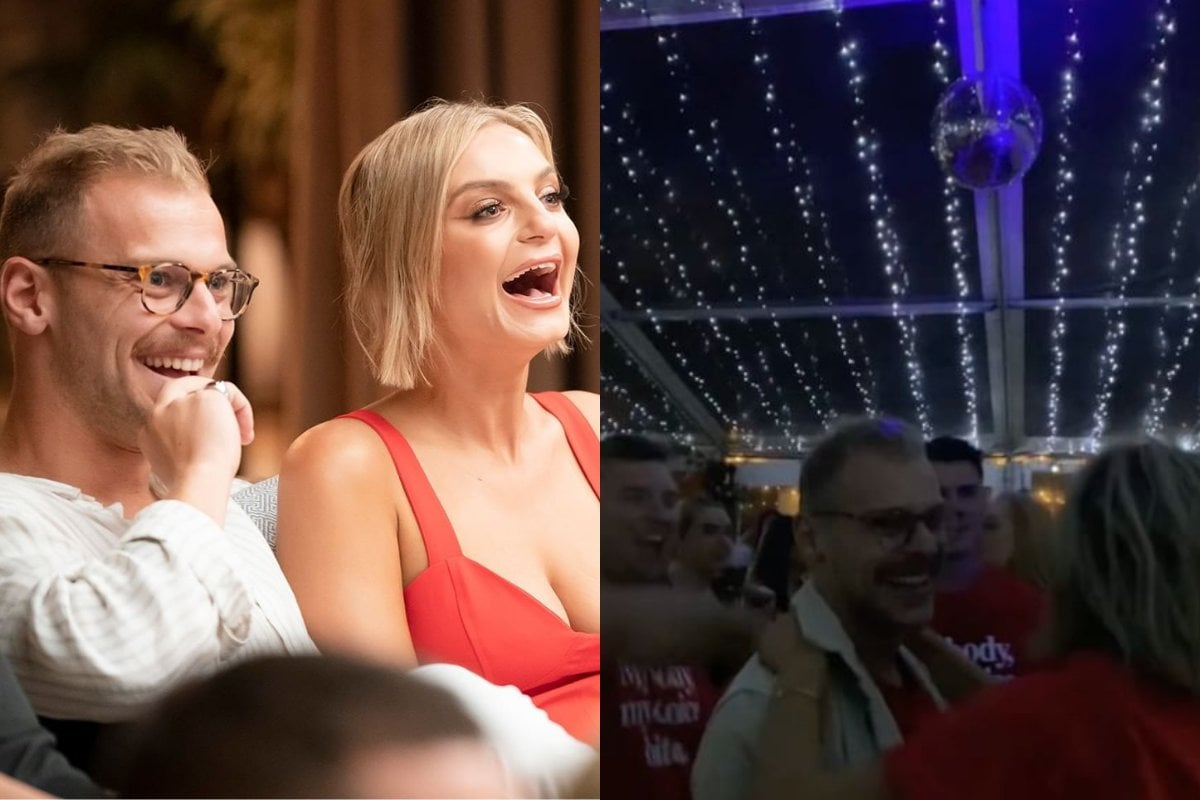 MAFS - a show about finding love in an unorthodox manner, by marrying someone at first sight.

...Except that it's also a show that gets wildly distracted by drama too. And this season was no different to the last, with dinner party fights fuelling the narrative much more than any love story.

But one couple managed to have equal footings in both drama and romance. And that couple was Domenica and Jack.

Despite being found at the core of most of the season's chaos, Domenica and Jack made it to the end of the show.

In their final vows they chose to stay together, but since filming wrapped, what has changed?

Firstly, what were Domenica and Jack like on Married At First Sight?

The pair had a connection from the start, with Domenica telling New Idea, "I knew from the moment I saw Jack, he was kind straight away."

Their love of dogs, mutual Italian heritage and similar outlook on life meant they quickly became a strong couple on the show.

Despite hitting it off, Domenica was open about her reservations to jump straight back into a full-blown relationship with Jack, having gone through a divorce.

For Jack, he was initially concerned about Domenica's high sex drive, expressing it wasn't as much a priority for him as it was his wife.

In spite of their hiccups, the couple quickly bounced back... until the final dinner party that is, where Domenica admitted she wasn't sure about going the distance with Jack.

Did either of them ever say 'Leave'?

No, the pair did not write leave in any commitment ceremonies. Week after week, Domenica and Jack maintained they intended on sticking it out to the end.

Listen to Cancelled's episode on Married At First Sight. Hosted by Clare and Jessie Stephens. Post continues after audio.

What did they say at final vows?

During final vows, Jack said he was committed to continuing their relationship outside of the experiment.

"I would love to continue this relationship on the outside world, because I truly do believe we are something great," he told her.

For Domenica, she expressed the "instant chemistry" was what made her want to stay with Jack.

"From day one, we bonded. It was instant chemistry. You said in your wedding vows you wanted someone to challenge you, and I believe I did just that." 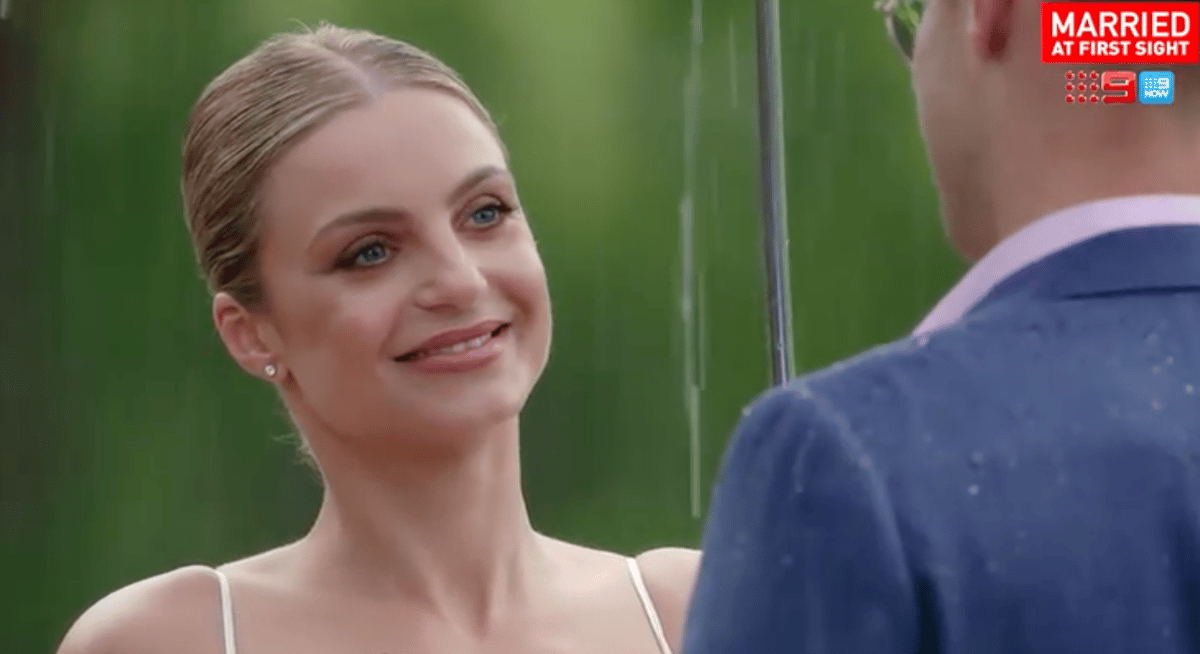 Image: Channel 9. However, the bride dropped a major bomb.

"It's no secret we have struggled throughout this experience... I thought my feelings would be much deeper than they are right now," she said.

"Throughout the entire experiment, I never gave up hope. I am hoping we can continue what we have in the real world, because right now it is too special to let go."

In their final MAFS interview together, Domenica said: "Seeing him there... I forgot about everything else."

Domenica and Jack misunderstand each other at the final dinner party.

While the pair made it clear they were in it for the long haul in their vows, Domenica and Jack arrived at the final dinner party separately and revealed they had ended their relationship.

"It kind of fizzled," Domenica said. "I don't know what happened and I'm left very confused."

Despite the mixed feelings, she admitted: "I'm going in tonight with, 'Never say never.' I mean the great Justin Bieber said it himself. I will never say never. We've got that connection."

While in conversation with Tamara and Samantha, Jack said he still "loved" Dom.

"She's one of my best mates," he said before adding they speak daily.

Later, in another conversation, Dom and Jack talked about their split, with both admitting they misunderstood each other's love languages and desires.

"I thought we were just mates, and that's what you wanted," Jack told her.

According to the experts, there is still hope for the pair, with one saying: "If they keep talking they're going to get back together, because it is a misunderstanding."

What did Jack and Domenica say during the final episode?

At the final commitment ceremony, Jack and Domenica opened up about their decision to split up after the experiment.

"We vowed to each other we would try to leave the experiment to pursue what could be," Domenica explained. "I really feel as though I reached out to Jack and kept communication. For me, I do feel it was not reciprocated as much as I would have liked."

Jack admitted he hadn't tried as hard as Dom would have expected, saying: "I'll take accountability... I had a lot of time to sort of reflect on the last tail end of the experiment."

He went on to say: "We got to the end and it was still uncertain... That lack of certainty pushed down my desire to continue. The end of our relationship was still very 'maybe'."

Domenica added that their relationship experienced a major "flip" where she backtracked during the experiment.

"We kind of had that rough patch and things kind of flipped, and now we're here."

The experts noted the pair's body language, and observed that there was a connection between the two. Mel went on to ask if they could hold out hope of a rekindling.

"I mean, Justin Bieber said it: 'Never Say Never... I will fight til forever,'" Domenica said.

Jack added: "Who knows what the future may hold for us."

Domenica and Jack get snuggly at the MAFS viewing party.

In a clip posted by So Dramatic!‘s Megan Pustetto, Dom could be seen planting a kiss on Jack's cheek while they watched the final reunion play out.

The pair were sitting next to each other at Domenica's family and friend's viewing party. Ella, Al and Brent were also in attendance.

While we can't be sure what's in store for the pair, it appear as if though they have remained close.

What have they said since filming wrapped?

Since MAFS wrapped, the pair have been seen attending multiple events together, including a private family function.

Beyond that, they've also been fairly candid about their future together.

“We definitely spoke about the possibility of an engagement,” Domenica said in a New Idea interview. “We really didn’t want to put any form of pressure on having to feel any kind of way about each other.”

"The first few weeks were really intense … [but] I really do believe that by pushing us out of our comfort zones, we were able to come out of it stronger! No pressure, no diamonds!" Domenica explained.

"We definitely discussed how marriage would come [about] in the real world," Jack added.

"Dom is such a caring person. I can see her giving up everything for her children. So I guess you could say, yes, we would make pretty good parents!"

Domenica also shared some more intimate details on an Adelaide radio show, saying: "It's a full bed when it comes to bed time, two adults and the dogs."

Before realising she may have spoiled the ending of the show, and quickly stating: "Honestly, I don't have enough media training for this!"

Is there any proof the pair might not be together?

Ahem. Yes, yes there is.

The fact the pair have done numerous interviews together - which is unlike any post-show press we've seen before from MAFS contestants. This is either because production knew they would be unable to hide their relationship in the outside world, or they are generating a very big red herring. If it's the latter, both Dom and Jack deserve Oscars.

Aside from this, Domenica and Jack actually admitted they indeed were no longer together by the time filming for the final reunion came around.