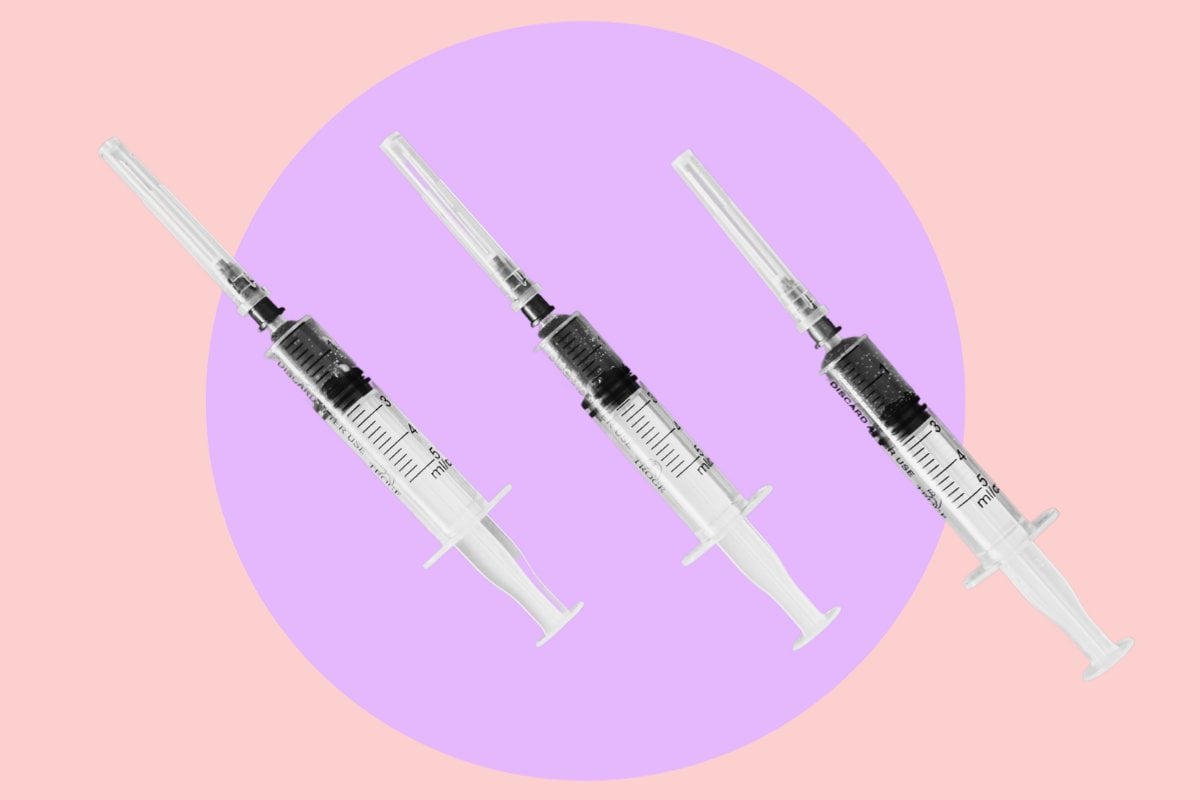 Despite all the chatter and popularity surrounding anti-wrinkle injections on social media, I regularly meet patients of all ages who want anti-wrinkle treatments but do not understand how it works, or how it differs from dermal fillers.

As a medical professional, patient-centred care is a central and key tenet of what I was trained to do - first, do no harm.

Watch: ICYMI: Lips are the new butts. Post continues below.

Given that all aesthetic treatments are essentially elective and medically unnecessary, it is important to me that patients are as well-informed as possible to make their choice and decision to proceed.

So what are some common myths I have heard patients believe about anti-wrinkle injections?

(FYI: In Australia, by law we are not allowed to use drug names, hence terminology like “anti-wrinkle” and “muscle relaxant” to get around health regulations!).

Occasionally a patient will reach out wanting to know if we can squeeze her in “today or tomorrow” due to an important event coming up in three to four days, for which she wants to look fresh.

While there are some promising new versions of anti-wrinkle treatments available around the world that apparently kick in as early as within 24 hours, we do not have that authorised yet in Australia. The apparent downside of these? They also wear off faster - in two to four weeks.

Duration of onset aside, I am not a fan of impulsive decision making when it comes to entirely elective treatments. This is for the simple reason that they are still medical procedures with side effects. While rare with an experienced doctor, side effects are still possible - the least of which is bruising, which may be apparent for a few days after treatment, potentially ruining an important occasion.

Most anti-wrinkle injections on the market at present take anywhere from three to five days to begin to take effect and peak at approximately two weeks. This is when I tend to offer new patients a review, so we can determine if the effect is what they desired, and to determine the correct dose for future treatments.

Listen: Curious about PDO threading? Find out all about Kelly's experience on this episode of You Beauty! Post continues below.

Myth #2: Anti-wrinkle treatments will age you when you stop having them.

Many people are worried that having these injections will permanently affect their face, or the way they use their muscles or even prematurely age them if they eventually decide to stop having treatment.

In reality, the drug that is used in anti-wrinkle injections works by paralysing/weakening the muscles that cause movement. Over time (usually weeks rather than months), new nerves are regenerated to supply these muscles with blood.

This results in (from as early as six weeks post-injection) return of gradual movement to these muscles. By three months, and often earlier depending on the dose used as well as desired movement by the patient, the dose will have worn off and the patient is ready for re-treatment.

Over time and with continued use, these muscles will remain slightly weaker compared to untreated muscles, resulting in the same dose lasting longer/working better. This results in smoother skin and fewer/fainter lines, especially in the forehead, frown and crow's feet, giving a more youthful and refreshed appearance.

Therefore, in theory, if one was to have regular anti-wrinkle injections four times a year for two to three years and then decided to stop doing so, it would likely take some months for full movement and strength to return to those muscles. It would also then lead to reformation of lines - those that led the patient to begin treatment in the first place.

Not unless you want to! The way we used to use the toxin in its early days is likely quite different to the way we use it now.

While I certainly have a small number of patients who ask to be 'frozen', these days most patients are more concerned with looking 'fake' and simply want to look refreshed and well-rested.

Many of my patients also rely on the full range of facial expressions at work and in their personal lives (I have had several mums say to me “I want my kids to still know when I’m angry!”).

These patients want anti-wrinkle injections to help soften the appearance of etched-in lines, rather than risk loss of movement in an area of their face, such as the frown lines, or forehead lines.

Ultimately, aspiring to a 'frozen' look means that your treating clinician has to use an excessive dose at least initially, to stop you moving your muscles at all. Over some weeks, as nerves begin to regenerate, movement will return as early as six to eight weeks.

So, it is almost impossible to completely 'freeze' areas of the face for months at a time without regular treatment in between the three months, which I do not recommend.

Myth #4: Anti-wrinkle injections are only for women.

While women remain the biggest demographic to seek elective aesthetic treatments, some 10 to 15 per cent of patients tend to be men - many of whom also want to age well and discreetly.

Men tend to need slightly larger doses than women for the same effect, as testosterone in men tends to confer greater muscle strength.

Conversely, societal expectations of men tend to be such that men who age well, are “rugged” and still have some wrinkles. With this in mind, men usually look to soften lines rather than erase them.

The only thing that is addictive about injectables is the real risk of patients coming to rely on it to feel good about themselves. This can be to the extent that a small number will begin to hyper focus on this feeling.

When this occurs, I tend to discuss this with my patients and to point out the hyper focus on them, as it becomes the duty of any ethical practitioner to say no, or to ask that we hold off for a bit.

For this reason, I tend to not offer more anti-wrinkle injections if lines initially come back earlier than three months in a patient new to toxin, or to keep adding more filler if a patient believes it will solve their problems. Obviously in these cases, discussion is important, but the ability to say no is just as important to keep the patient and practitioner safe.

Nothing about anti-wrinkle injections are addictive, and before it was recognised as an agent that could safely be used in aesthetics, it was used for decades to help in medical conditions outlined below.

As noted above, the discovery of anti-wrinkle injections in aesthetics came about by accident while using it for a medical condition called strabismus, in which scientists noticed the animals injected with it also had smoother frown lines!

The drug originally had mainly medical uses for neck spasms (cervical dystonia), muscle spasms in people with Cerebral Palsy and strabismus (abnormal alignment of the eyes).

To this day, anti-wrinkle injections continue to have many therapeutic uses, including for the ones above, as well as for uses in certain types of chronic migraines, for bruxism (teeth grinding), as well as hyperhidrosis (or excessive sweating) and urinary incontinence.

So, there you have it!

These are just some of the regular and most common myths I encounter day-to-day in-clinic when discussing strategies to age well with patients, which may include judicious use of injectables if they are open to the idea.

This article originally appeared on Skin Essentials and has been republished here with full permission.