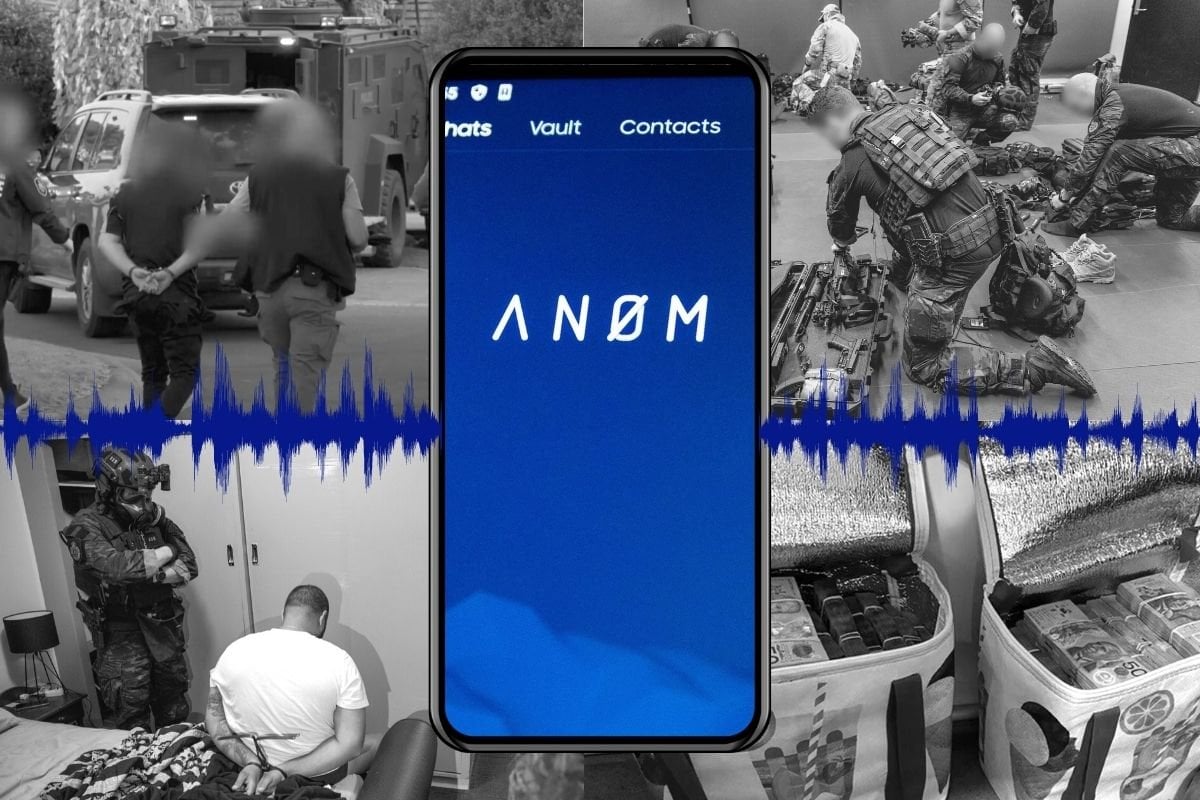 Three years ago, over a couple of beers, members of the AFP and FBI hatched a plan that on Monday night delivered one of the world's largest ever crime busts.

Worldwide, Operation Ironside has led to 800 criminals being arrested in 18 countries, the seizure of 32 tonnes of drugs, 250 firearms, 55 luxury cars, A$191 million in cash and cryptocurrencies, and the disruption of 21 murder plots in Australia alone.

AFP Commissioner Reece Kershaw thanked the @FBI for its cooperation, along with the 18 countries that worked with the AFP to maintain the integrity of the platform. pic.twitter.com/27ANV5SBOi

Dig behind those mindboggling statistics, and the heavy blow the global sting has had on organised crime in 2021 is truly astronomical.

Here's everything we know:

The idea: A couple of beers and 'criminal influencers'.

According to AFP Commissioner Reece Kershaw, who addressed the media on Tuesday, the idea to plant a digital Trojan horse that would infiltrate criminal syndicates from the inside was thought up "over a couple of beers."

The Australian Federal Police (AFP) and the Federal Bureau of Investigation (FBI) had worked together to shut down a Canadian company that sold thousands of modified and encrypted smartphones to Australians so they could be used by criminals.

After shutting it down, they realised there was now a big gap in the market, and so the idea was hatched to fill that gap themselves.

Enter: AN0M. An encrypted messaging app created and manned by the FBI.

But how would they get it into the hands of criminals?

Inspired by social media influencers' ability to spread a message, the AFP and FBI used 'criminal influencers' to distribute the app, by getting undercover agents to hook up underworld figures like Australia's most wanted Hakan Ayik with the technology.

Fugitive drug lord Hakan Ayik, who led the criminal underworld straight to law enforcement, has been given an ultimatum: Hand yourself in and save your family https://t.co/UP8YCeZyQJ

Eventually, the app grew to 11,000 global members who shared their plots, plans and crimes openly and brazenly, thinking they were protected from prying eyes by an invite-only, secure and encrypted network.

The police, however, were reading everything. In fact, users were paying a six-monthly subscription fee directly into police coffers. The money simply went back into the operation that eventually stung them.

The three year wait: "We've been in the back pockets of organised crime."

According to Commissioner Kershaw, police have been sitting in the "back pockets of organised crime," watching them talk about drugs, violence, hits on each other and hits on innocent people.

They've seen every single detail down to photos of tonnes of cocaine concealed in shipments of fruits and exact timings like, "we'll have the speedboat meet you at this point."

Due to the app being purchased on pre-loaded handsets, in some cases it took months for police to establish who specific handsets belonged to. 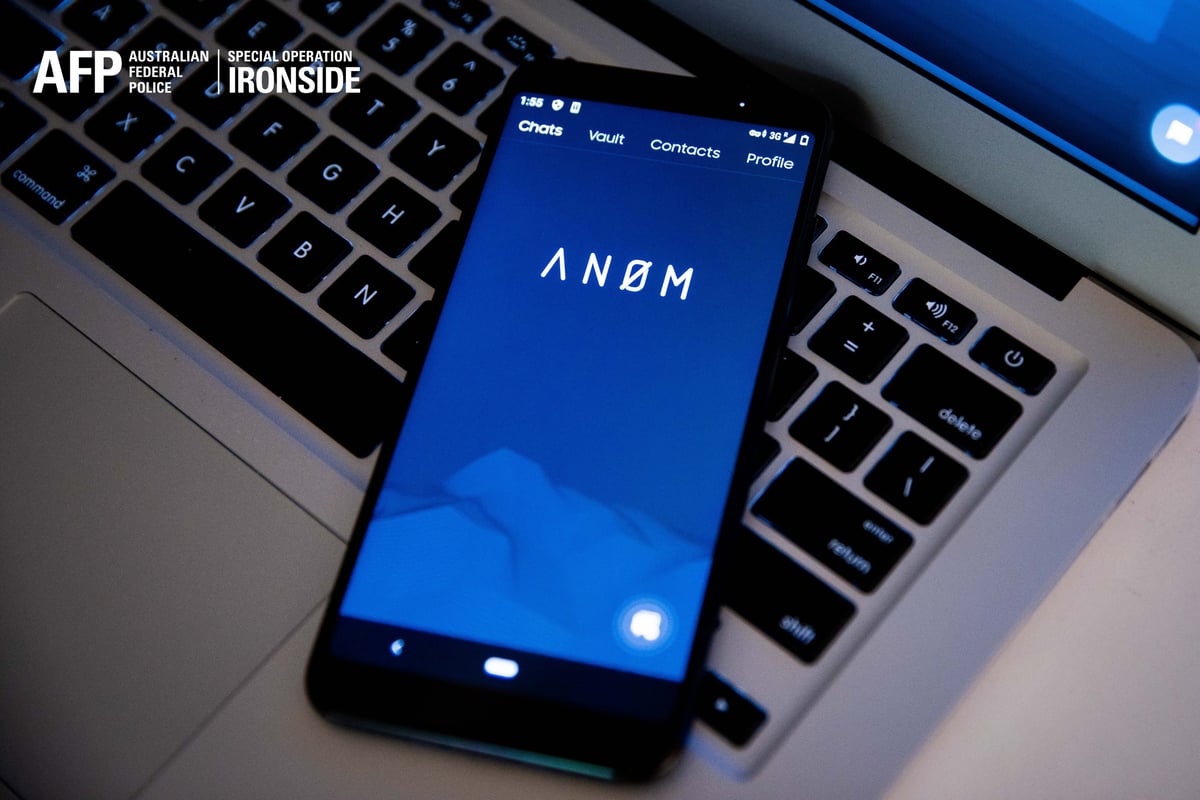 AN0M was designed by the FBI and AFP and has tricked criminals around the world into being caught. Image: AFP/Twitter.

But overall, the FBI helped to infiltrate devices into 300 criminal groups, in more than 100 countries.

Here in Australia, one of the potentially deadliest crimes they managed to prevent was a suburban mass shooting, with the plan involving the use of a machine gun at a cafe.

The operation has also given Victorian Police the tools to potentially solve four outlawed motorcycle gang-related murders in their state.

Commissioner Kershaw also shared that they were able to determine that an unnamed outlaw motorcycle gang in Australia was making $20 million each month from drug peddling.

The near miss: The blogger that nearly ruined it all.

In late March, the Daily Mail reports an anonymous blogger known only as 'canyouguess67' posted an article warning users to keep off AN0M for their "own safety."

The article, which has been pulled down, read: "THEY ARE COMPROMISED, LIARS AND YOUR DATA IS RUNNING VIA USA."

The blogger had tested the device and was voicing concerns that AN0M was actually in constant contact with Google services and warned that "authorities could completely infiltrate ever users' devices (sic), as well as their operations, and... authorities would have the ability to decrypt and intercept messages."

It is unclear what impact the blogger's concerns had on the progression of the operation.

The Takedown: An unprecedented blow.

On Monday night, more than 300 search warrants were carried out by 4000 police officers across Australia, with simultaneous stings in the US and Europe leading to the arrests of 800 suspects worldwide.

As acting US Attorney Randy Grossman told a press conference this week, "every single person who used AN0M, used it for a criminal purpose."

And as Australian Prime Minister Scott Morrison reiterated, "[this] operation puts Australia at the forefront of the fight against criminals who peddle in human misery."

Operation Ironside has led to the arrest of 224 offenders on 526 charges in every mainland Australian state. More arrests are expected domestically and offshore under a coordinated global response connected to Operation Ironside. pic.twitter.com/ClDZ4879BT

Here in Australia, 224 people were arrested in every mainland Australian state, including members of outlawed motorcycle gangs.

21 murder plots were foiled - 90 per cent of which were directly related to outlaw motorcycle gangs. In addition, 3.7 tonnes of drugs, 104 weapons and about $45 million in cash and assets were seized.

Scott Morrison said the operation had "struck a heavy blow against organised crime – not just in this country, but ... around the world," with Home Affairs Minister Karen Andrews calling it the "most significant operation in policing history here in Australia."

Ninja Warrior 2017 contestant Sopiea Kong was charged after a raid at a Kangaroo Point home, where police allegedly seized 154g of meth. She was also allegedly in possession of a revolver and more than $2000 cash.

The man who unknowingly helped get the entire operation get underway, Australian fugitive Hakan Ayik, is still at large, with Commissioner Kershaw telling Tuesday's press conference, "He was one of the coordinators of this particular device. So, he's essentially set up his own colleagues. And my view would be the sooner he hands himself in... the better for him and his family."

In Europe, there were 49 arrests in the Netherlands, 75 in Sweden and more than 60 in Germany, where authorities seized hundreds of kilograms of drugs, more than 20 weapons and more than 30 luxury cars and cash.

Swedish police say they prevented a dozen planned killings and believe they have arrested several leading actors in criminal networks.

Finnish police not only detained almost 100 suspects and seized 500kg of narcotics but also found a warehouse with 3D printers used to manufacture gun parts.

New Zealand arrested 35 people and seized drugs and assets worth millions of dollars.