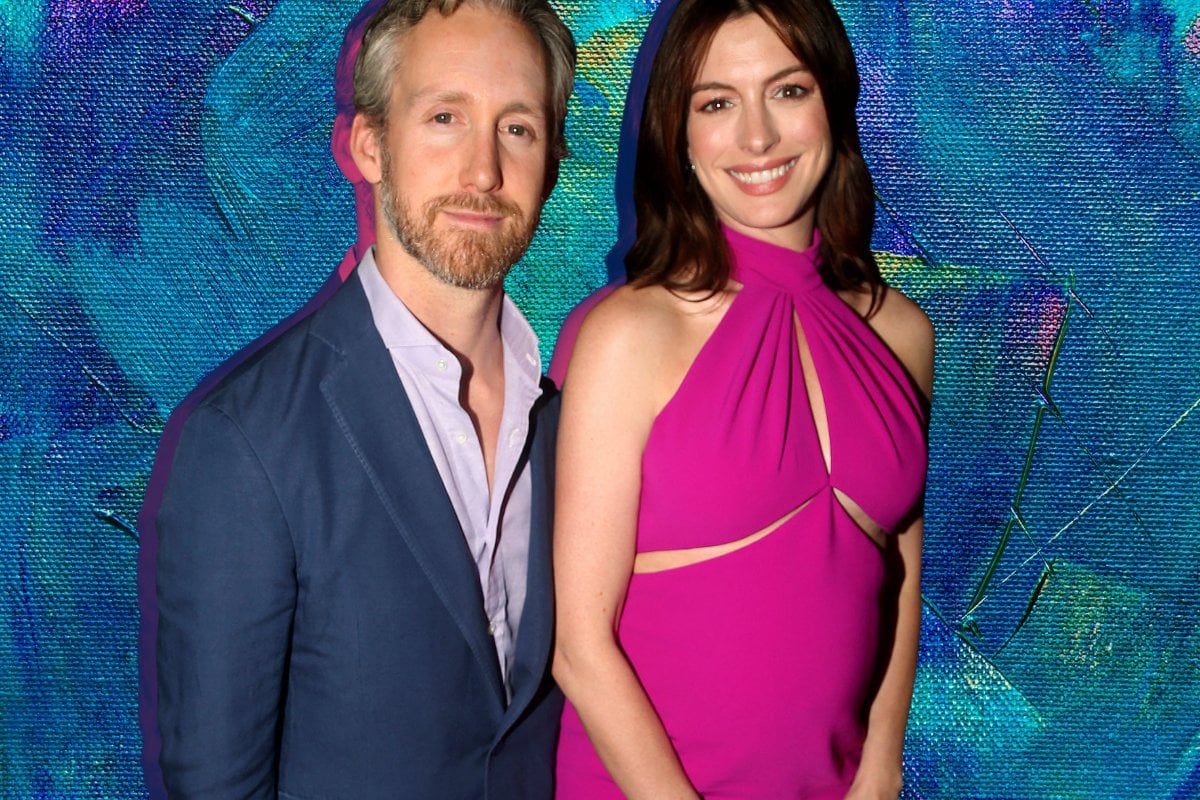 While Anne Hathaway has two young children, most people would never know. The 37-year-old actress is notoriously private when it comes to her sons, rarely posting photos or commenting on either of them.

So much so, it took her 11 months to announce the name of her second boy.

When appearing on Live with Kelly and Ryan on Monday, the actress explained that she was pregnant with her second son while filming her latest movie, The Witches.

Watch the trailer for The Witches here. Post continues below.

"Now I have a beautiful almost-11-month-old boy, but I was pregnant when I made The Witches, so technically he's all over that performance," she said.

Hathaway explained that the costume designer for the film, Joanna Johnston, wanted to cinch in Hathaway's costume at the waist. However, as the actress was pregnant, that wouldn't quite work.

Then when Ryan Seacrest asked about how her two young children are coping together, she subtly shared her second son's name.

"No coping, just love," she said. "Now Jack's big enough to wrestle with, and that's brought a new element to their relationship that's really cute."

Happy 2016 to my beautiful Instafriends! So, posting a bikini pic is a little out of character for me, but just now while I was at the beach I noticed I was being photographed. I figure if this kind of photo is going to be out in the world it should at least be an image that makes me happy (and be one that was taken with my consent. And with a filter :) Wishing you love, light and blessings for the year ahead! ⚡️🦄Annie🦄⚡️

Since becoming a mum, Hathaway has lessened her workload to enjoy motherhood at a slower pace.

"Before I had my son, I sensed this pressure to fill my schedule. If I wasn’t working, I felt like I was wasting time," she told Shape. "Now I know I have to build in breaks in my year, and there are times when I’m just not available to work because it’s important for me to be home with him."

Hathaway also made the conscious decision to keep her children out of the public eye.

"I had never posted a photo of my son, and I decided to post a shot of the back of his head, and almost as soon as I’d done it, I wished that I hadn’t," she told Jezebel.

"I felt like I had broken some kind of a seal in inviting people into my life. And even though I felt as though I had done it in as protective a way as I could, even though it was a moment I was incredibly proud of, I don’t know that I’ll ever do it again."

But while Hathaway is extremely private, she did announce her pregnancy with her second son, Jack.

Uploading a bump photo back in July 2019, the actress shared the exciting news, while also explaining that the process of getting there wasn't easy.

"⁣All kidding aside, for everyone going through infertility and conception hell, please know it was not a straight line to either of my pregnancies. Sending you extra love," she added.

During an interview with ET, she elaborated on her pregnancy struggles.

"It's not [always a straight line]. There is a one-sided narrative to this, and of course, it's wonderful that we celebrate the happy moment when it's ready to share. I think there is a silence around the moments before that and they are not all happy, and in fact a lot of them are quite painful. I think that pain is that these women feel like we're the only ones going through it," she said.

"I just knew that somewhere my announcement was going to make somebody feel worse about themselves because -and it wouldn’t be their fault that that happened - you just can't help it when you want something so bad and it feels like it's happening to everyone else but you. And I just wanted that person to know that they're included in my story too and that my story didn't just have happy moments too," she continued.

Hathaway married her husband, Adam Shulman - with whom she shares her two children - on September 29, 2012 in Big Sur, California. She wore a custom Valentino gown.

He's appeared in minor roles in Ricki and the Flash and The West Wing. In 2015, he and Hathaway produced the rom-com Song One together.

While the couple got along well when they first met, it was a while before they actually started dating.

"We hit it off immediately, but it took us a pretty long time to get together. He thought that I had a boyfriend, and I thought that he had a girlfriend, so I thought that I’d better keep my distance because I didn’t want to be that girl. But after we settled that, things sped up a bit," Hathaway told Us Weekly.

And she always knew he was the one.

These days, Hathaway, Schulman and their two boys live in New York City.