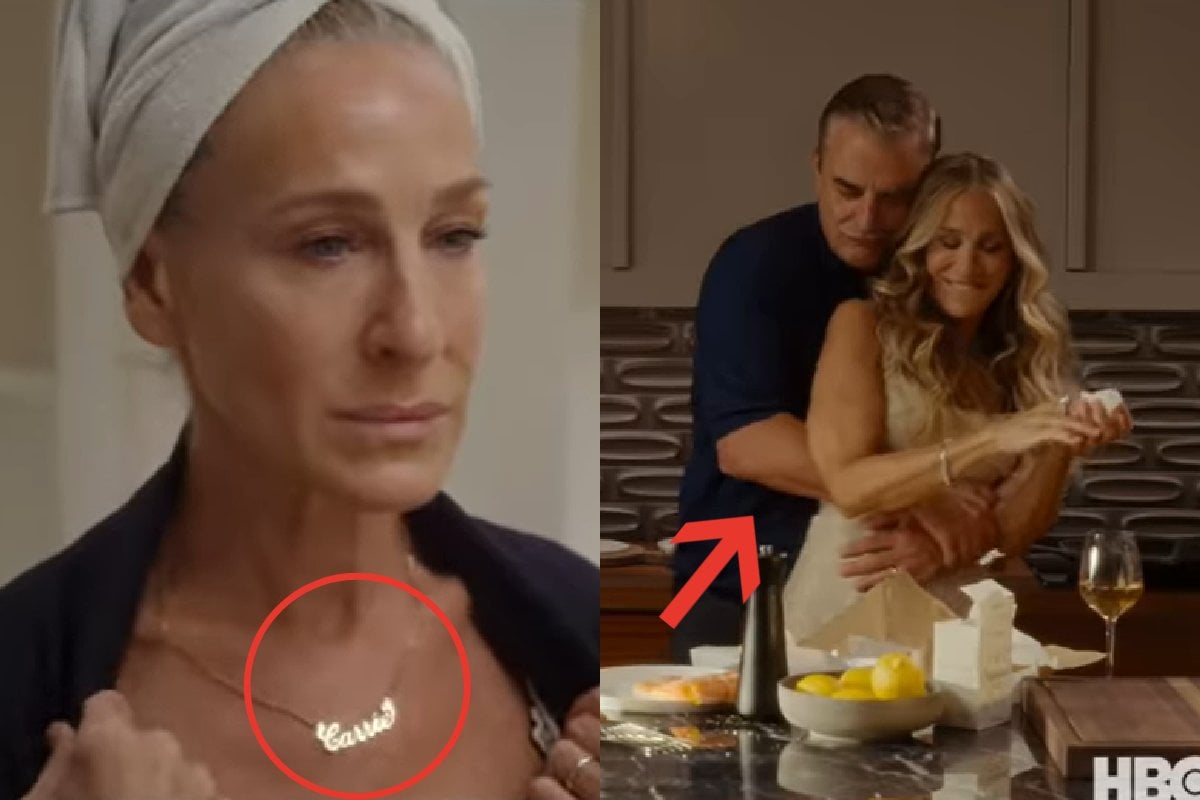 Almost 24 years ago, a little TV show called Sex and the City premiered on HBO.

It was a gamble for the prestige cable TV network, as it showed women on TV like we'd never seen them before.

Bolshie and unapologetic. Sex-positive and judgemental. Dreaming of having it all while at the same time wondering whether they actually wanted any of it, really.

They drew parallels between their lives and the lives of these unfathomably glamorous New York women. Fashion trends were heavily influenced by the contents of Carrie's ever-expanding wardrobe. Snappy dialogue from the show became part of the lexicon.

For better or worse, Sex and the City is the TV show that has had the biggest influence on how women are represented in pop culture.

It defined a generation of women who had more choices than ever before and as a result were both incredibly empowered and confused.

And now all the ladies are coming back, well almost all of them (RIP Samantha, you absolute firecracker).

The Sex and the City reboot And Just Like That... will premiere next Thursday, December 9, on Binge, with two episodes.

Over the past few months, HBO and Binge have drip-fed us little clues about the upcoming season, dropping the first full trailer earlier this week.

So what's in store for the women in 2021? They'll be stepping into a world where feminism is intersectional, gender is fluid, bodies of all shapes and sizes are celebrated, and audiences want to hear from a variety of voices.

Here are all my theories about what's going to happen in the first season of And Just Like That...

Samantha has left the chat... (but she might come back)

Since the reboot was announced and Kim Cattrall announced she would not be reprising her role as Samantha Jones, fans have been wondering how the show will deal with her absence.

There were rumours that Samantha would be killed off but it seems like the show has decided to leave open the possibility of her reprising her role in the future.

According to an "insider" who spoke to the Daily Mail (and they never make stuff up) Samantha has simply moved to London and isn't part of the group anymore.

"We couldn’t have Samantha roaming around New York City and not have the other women (Charlotte and Miranda) not interacting with her," the source said. “It just wouldn’t have made sense. Sending her to Los Angeles wasn’t an option as we’d done that in the first movie, so having her character based in London really was the perfect way to keep her alive and explain her absence.”

The "insider" also hinted that Carrie will try to rekindle her friendship with Samantha towards the end of the season.

"Carrie is the one who has the tough time without Samantha, and by the end of And Just Like That, you’ll see Carrie extend the olive brand and try and rekindle the friendship," they said.

“We have high hopes that by the time we begin filming the second season, Kim will have joined the show and Samantha Jones can make a triumphant return to the Big Apple. We want Kim back. She was missed on set. We all understand why she feels the way she does. We get it. We just want her to come back for future seasons.”

When the reboot was first announced, there were rumours that Chris Noth would not be reprising the role of Big and the character may have died between the last movie and the reboot.

But it's since been announced that Noth is very much a part of the cast and Carrie and Big are still together. In the trailer released this week, Carrie and Big were very loved up in several scenes in their posh penthouse apartment.

However, it seems almost too... rosy. Like they're setting us up for heartbreak.

My theory is that Carrie and Big are very much still together but Big dies in the first season.

That would explain the pap shots of the cast dressed as though they were attending a funeral, and the return of Natasha (Bridget Moynahan) and Aiden (John Corbett).

Natasha was married to Big, so it makes sense that she would attend his funeral or reach out to Carrie afterwards. Same with Aiden. He was a big part of Carrie's life and the one who got away, so it makes sense he would touch base if Big died.

Plus maybe all those rosy scenes in the apartment are just Carrie talking to Big's ghost? 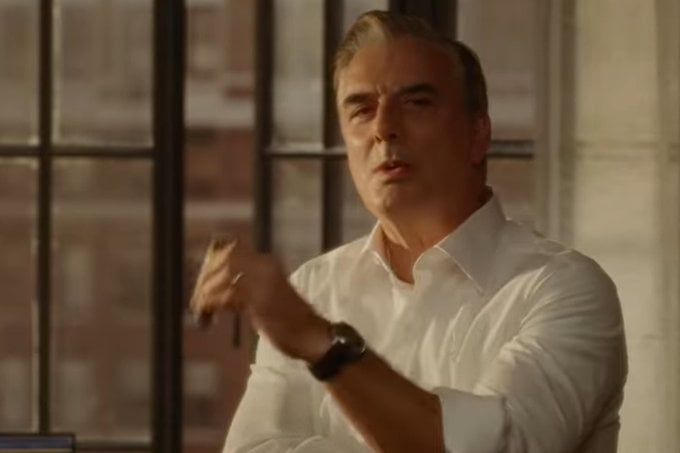 He seems to be watching her just like a... ghost. Image: Binge.

Carrie or Big have an affair. 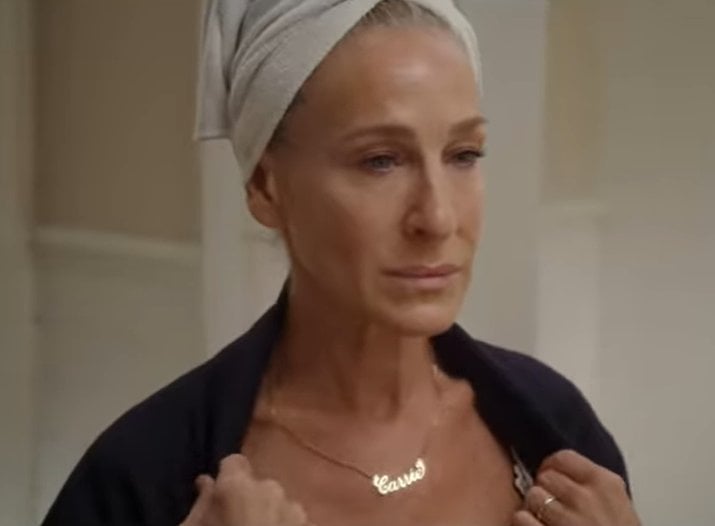 Another theory as to why Natasha and Aiden appear in the season is that Carrie or Big have an affair. Or maybe they both do.

They've been together for over two decades now, so it makes sense that their relationship might be tested by infidelity.

This theory is backed up by the fact that in the trailer Carrie appears to be wearing her wedding ring in some scenes but not others. And in one scene, she is wearing her iconic Carrie nameplate necklace and looking into the mirror with a solemn expression as the voiceover says "If you're not happy with who you are, step out of that box and change."

If so, it would be interesting to see how the reboot deals with a situation that a lot of long-term couples face.

There's been a lot of rumours that one of the main characters would explore their sexuality in the reboot, as the original series was so heterosexual and not representative of modern love.

Many believe that Miranda might come out as queer, but my money is on Charlotte.

Charlotte is the character who has always had very rigid ideas about love and sex and identity and relationships, so her coming out would be more of a twist and would represent a bigger character arc.

At the start of the reboot, it seems like Charlotte is still very much married to Harry, the most underrated husband of the original TV series.

But in the trailer released this week, there were several flashes of scenes where Charlotte appeared to be becoming close with new cast member Lisa Todd Wexley (Nicole Ari Parker).

Plus, there's a scene where Charlotte and Rose are watching Lily play the piano at a school concert and Harry is sitting behind them. 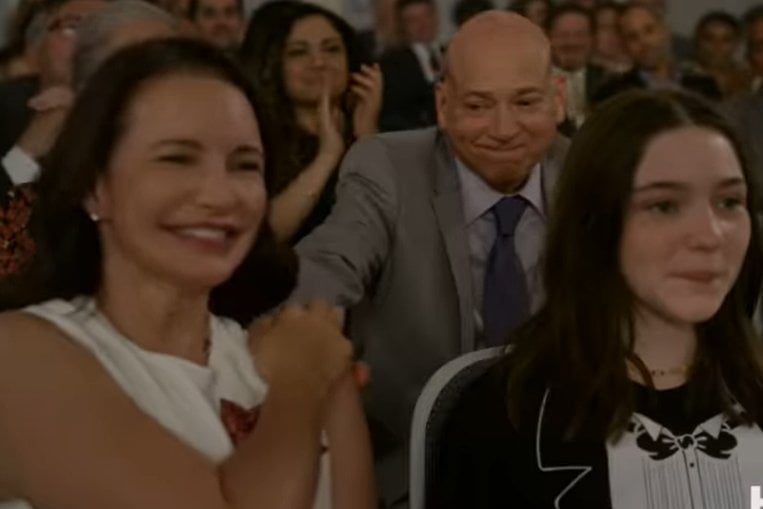 Does this represent a shift in their relationship? Image: Binge.

Later, Harry and Charlotte are walking through a school hallway and a look passes between them, like they've reached a new understanding.

The first two episodes of And Just Like That premiere on Binge on Thursday, December 9, with new episodes dropping weekly after that.