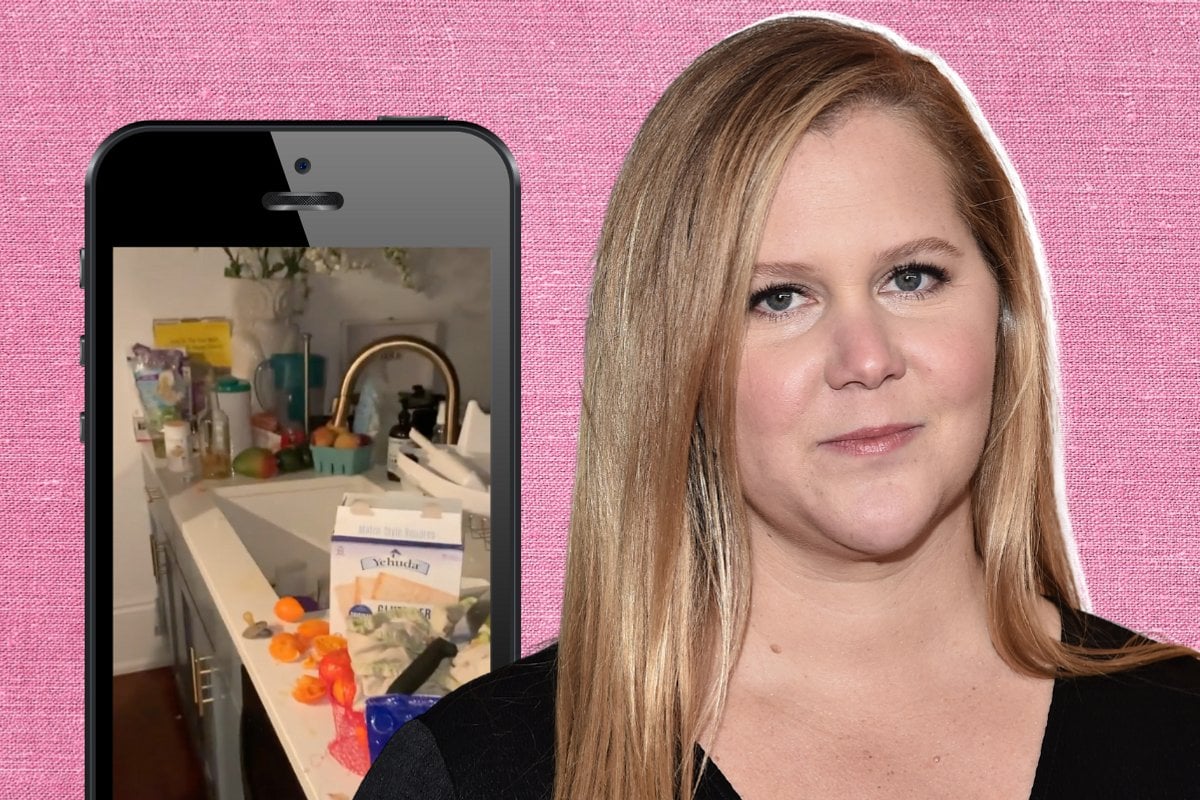 This week, Amy Schumer reminded parents everywhere that they're not alone. Because no matter how much money or fame you have, the stark reality is: parenting is hard.

Sharing a video to her Instagram on Wednesday, Schumer showed off what her kitchen currently looks like, alongside the caption, "Rocking!!!!!!"

In the video, filmed by her husband, Chris Fischer, Schumer is standing in the centre of the kitchen, looking rather exhausted, while insisting that despite being offered help, she and her husband do not need it.

"Yeah, actually, like we were worried about not having childcare but we're actually like doing really well - and I think we're a lot more capable of a lot more than we realised we were," Schumer said.

Surrounding her are stacks of dirty dishes, baby food, empty bottles and rubbish - and honestly, same.

Last month, the comedian and actress shared that their nanny Jane, who had quarantined with them and taken care of their 21-month-old son Gene, had left them to return to her studies.

"We have evolved to having no child care. Love to Jane who is focusing on her studies," she wrote on a since-deleted Instagram post.

"Any tips for cutting a toddlers nails? We are strugglin! Also thanks to @evamendes for posting a bunch of great accounts to follow for toddlers check out her page for the list!"

In February, Schumer shared a candid photo of her c-section scars.

One month prior, she shared a video explaining that she and her husband don't believe in allowing screen time for their son.

"Every family has different rules and it's all about what works for you. So, we decided to do no screen time at all for our son and just guide him more towards things like adorable books," Schumer said.

As she's telling the camera about this rule she pans across to show her son... with eyes glued to the TV.

And probably our favourite: in 2019, when Schumer penned a caption on Instagram discussing the mixed feelings of returning to work after having a baby.

"Five months today and like all mums I love him so much it hurts. I'm feeling strong and good and like I’m still a human being with interests and ambitions and goals I’m excited to reach," she wrote.

"It’s felt good to be back at work. I was so worried about it and was afraid to go back after he was three months old. A couple days I’ve cried from missing him. But it’s mostly good to be back and the breaks energise me to be a better mum and appreciate our time even more."