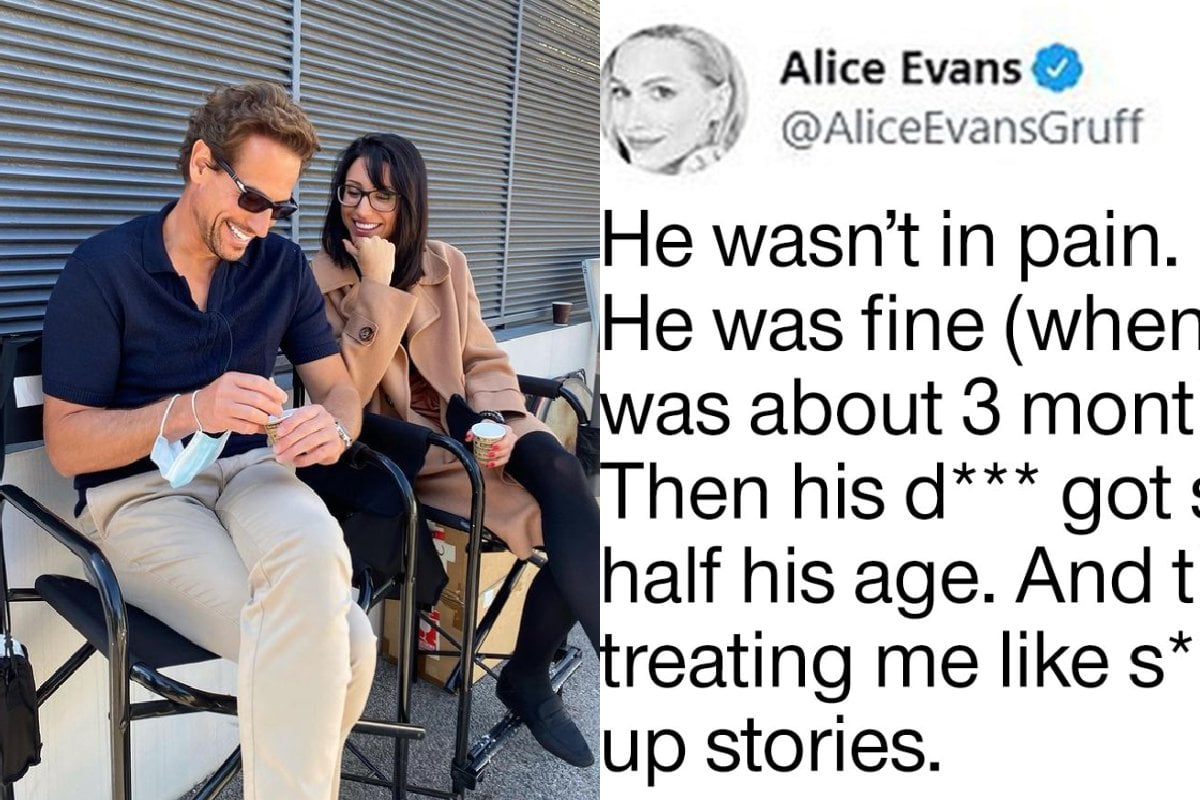 This week, Evans has publicly accused Gruffudd of having an affair behind her back for three years.

"So it turns out that my husband, after two years of telling me I’m a bad person and I’m not exciting and he no longer wants to have sex with me and he just wants to be on set abroad… has been in a relationship for THREE years behind all our backs. Good luck, Bianca," the 50-year-old wrote on Twitter.

So, who exactly is Bianca and how did things get to this point?

The couple met in 1999 on the set of 102 Dalmatians, with Gruffudd playing the animal shelter owner and Evans starring as Cruella de Vil's probation officer.

The pair became engaged on New Year's Day in 2006 and married one year later.

They share two children together, Elsie, eight, and Ella, 12.

Before their second daughter's birth, Gruffudd, 48, told People he had “basically been the best husband in the world,” during his wife’s second pregnancy.

“You go from being lover to husband, lackey, taxi driver. You just have to have so many caps on. Listen, it's a blessing that I am here, at home not working, being able to be there for her,” Gruffudd said at the time, before adding: “It's been tough.”

“I’m sure we have no idea what we are heading into. But we both love each other so much and really hope that we will create an environment of love and happiness.”

They announced their separation in January of this year.

At the time, Evans shared the news via Twitter, saying she had no idea why her husband of 13 years had left her.

“My beloved husband/soulmate of 20 years, Ioan Gruffudd, has announced he is to leave his family, starting next week,” Evans posted in a since-deleted tweet. “Me and our young daughters are very confused and sad.”

She continued: “We haven't been given a reason except that he 'no longer loves me.' I'm so sorry.” 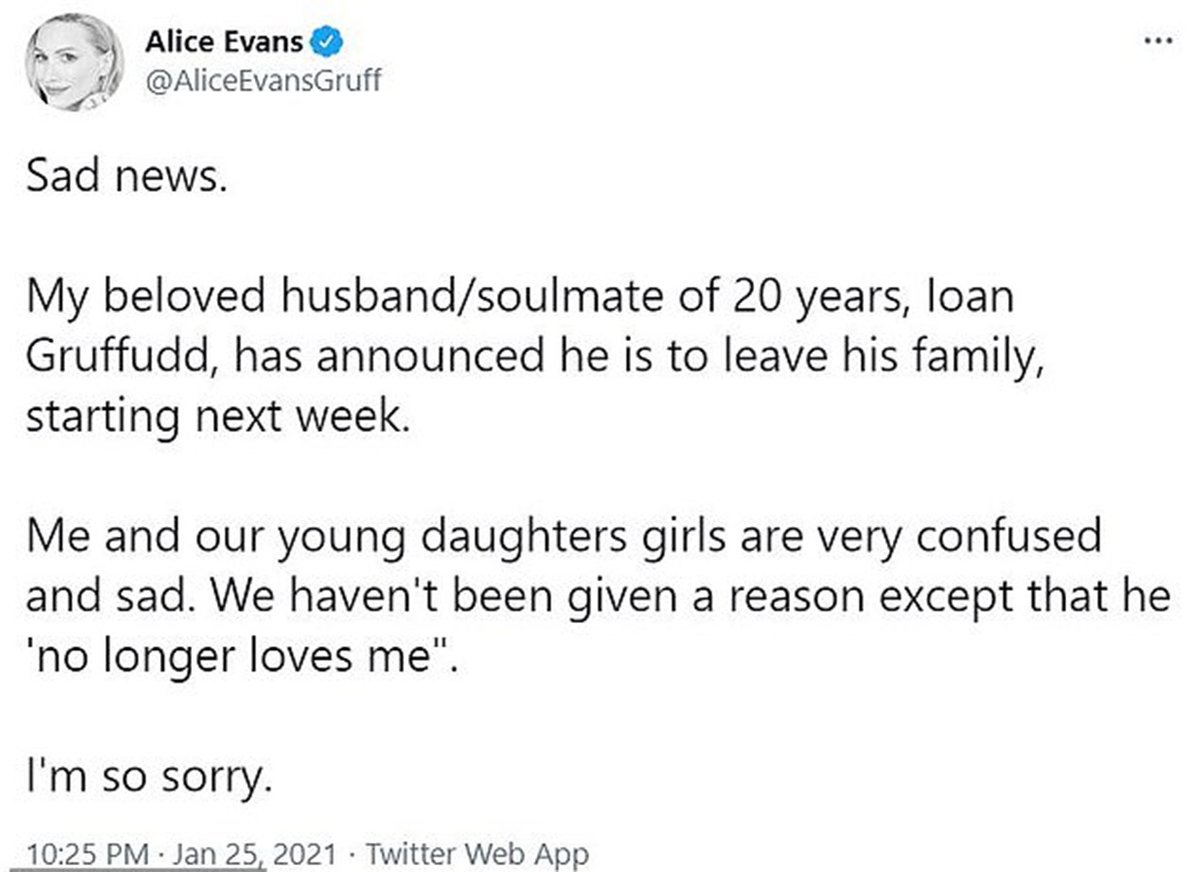 According to The Sun, she later explained why the post was no longer available on her profile.

"I didn’t delete the tweet from a few hours ago about him leaving. He did. From my account.

"And hell yes when I am being gaslit and mentally tortured then hell yes I will wash my linen in public." 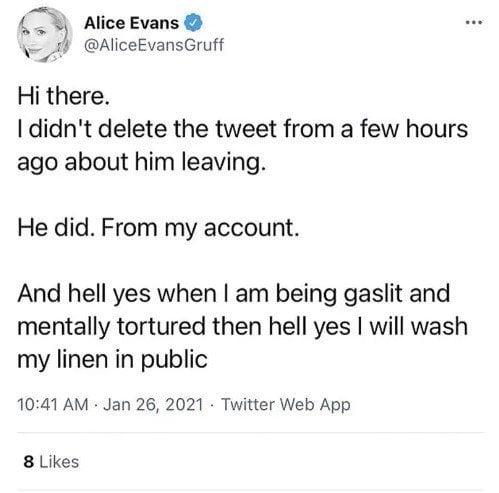 The couple later gave a joint statement to US Weekly, saying: "As you can imagine, this is an incredibly difficult time for our family and we remain committed to our children. Thank you for respecting our privacy."

In February 2020, Gruffudd admitted to The Guardian that his marriage had been struggling for a number of years.

“I think we’ve struggled the past four years, making time for each other because physically we’re apart.”

This week, Gruffudd went Instagram official with his new girlfriend, actress Bianca Wallace, captioning the post: “Thank you for making me smile again.”

In a series of tweets, she accused Gruffudd of having an affair with Wallace for three years. 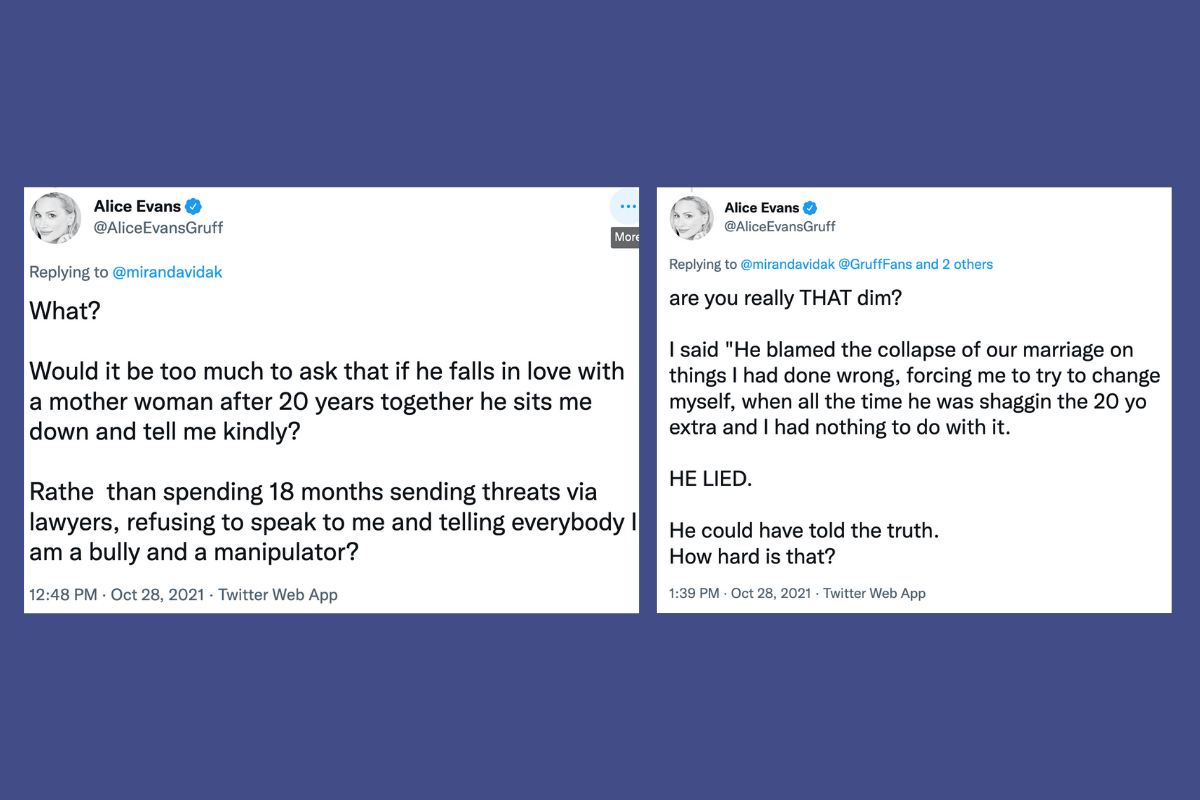 Evans also said she hasn't spoken to her ex-husband in over 18 months.

“Still nothing. We were together for 20 years. We spoke every day, at least three or four times. He was my best friend, my twin soul. I don’t know how to move on. I will, but at the moment I have no idea,” she wrote.

“A part of me still loves him. I spent over a year wondering what I'd done wrong and how I could improve myself. I feel quite embarrassed about that now," she continued.

She later responded to a series of tweets criticising her for publicly making the accusations.

Ok guys, thank you so much for allowing me to talk and work all this out with you.

Ioan and I had been together for 22 yrs ad not a day had gone by without taking to each other. What I found out today ripped my heart out. 😭

“You totally and absolutely know that they started seeing each other before he told me he didn't love me and wanted a divorce," she wrote.

“My entire life has been brought to its knees. I have nothing left. Would it be too much to ask that if he falls in love with another woman after 20 years together, he sits me down and tell me kindly?”

And yet when I use social media I'm chastised for it.

By the way, Elsie is still inconsolable. I can't send her to school today. Her whole little world has collapsed. https://t.co/ah62xSQ8y3

Evans also said that Gruffudd hasn't told their children about his new relationship.

"He hasn't even told them about the divorce yet," she tweeted. "They think he might come back. All his clothes are still where he left them a year ago. Toothbrush, creams, everything."

She also added that their youngest daughter is "inconsolable".

"By the way, Elsie is still inconsolable. I can't send her to school today. Her whole little world has collapsed."

On Sunday, in another series of tweets, Evans claimed Gruffudd unblocked her just moments before he posted the photo with Wallace.

“He unblocked me just a few minutes before posting it. I think he’d gotten to the loved-up point when he just didn’t care," she wrote.

“It was a ‘Bianca for President’ moment and f*** what the offspring thinks.”

“My heart went cold when I realised how meticulously planned it had been," she said in another tweet.

“Silly thing is, when I saw he’d unblocked me I had a moment of hope that perhaps he was ready to talk to me again. How wrong!”

She later replied to tweets defending Gruffudd, claiming his "d*** got stuck inside a babe half his age".

“He wasn’t in pain. For God’s sake. He was fine (when he was here, which was about three months a year.) Then his d*** got stuck inside a babe half his age. And that’s when he started treating me like s*** and making up stories," she said.

“We haven’t even started mediating. It’s insanity… The kids haven’t even been told he’s not coming back. His toothbrush is still next to the sink! I feel like I’m hallucinating.”

At the time of publication, neither Gruffudd nor Wallace have commented publicly on their relationship or Evans' accusations.

Reply
Upvote
1 upvotes
@chrissyinthemiddle The only person making it "public" is Alice Evans! She's been providing the unending fodder for the tabloids and gossip rags since the marriage ended.

Reply
Upvote
@rush My opinion was based on an article 50yo Alice Evans wrote herself about the lead up to her marriage breaking down. She described unpredictable moods, panic, depression and weight gain etc. In her ex’s defence she didn’t sound easy to live with. At the very least this woman appears to be having some kind of mental breakdown. Normally it’s acceptable to have empathy for people who experience these challenges. Yet that doesn’t seem to be the case.
C
cat 10 months ago

Reply
Upvote
2 upvotes
This is a very one-sided narrative.