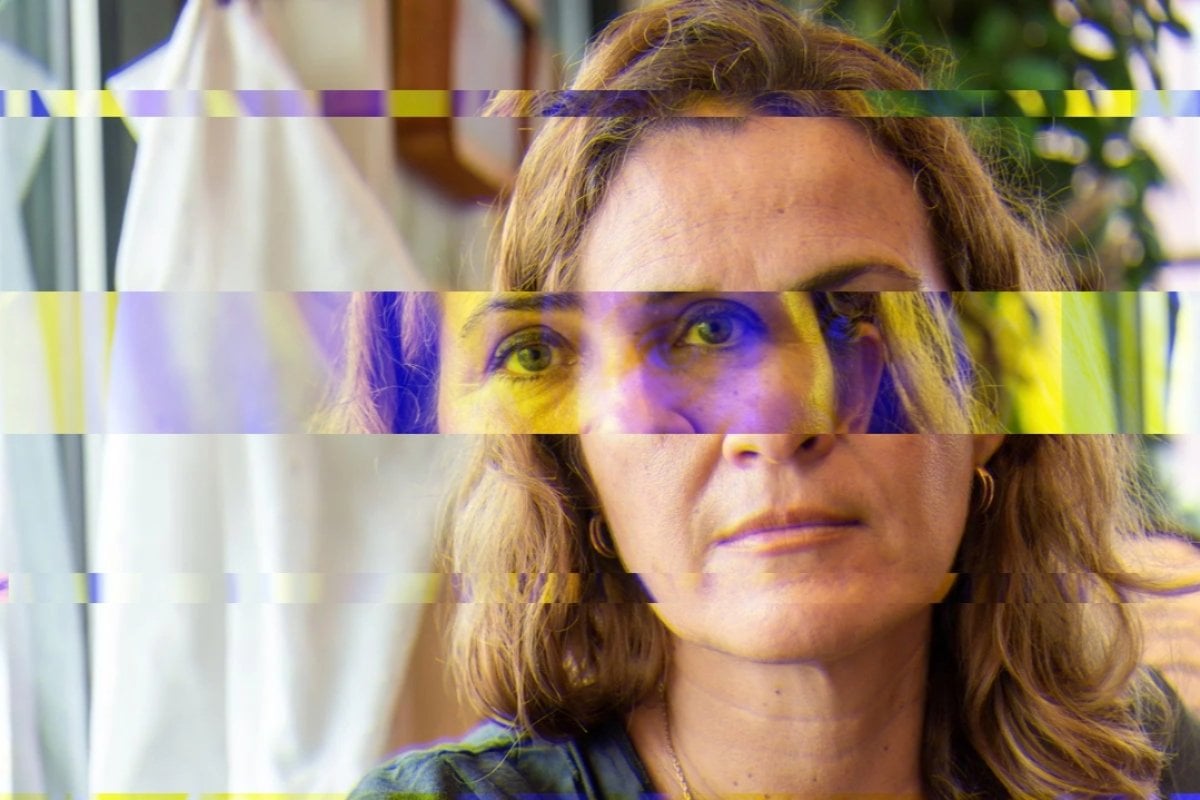 The author of this story is known to Mamamia but has chosen to remain anonymous. The feature image used is a stock photo.

As I sat crying on the floor, broken hearted, I asked myself, how can someone I love be so cruel and hurt me so much?

My four-year-old son comes to me, worried by my uncontrollable sobbing. He tries to comfort me, asking if I’m ok and gives me a hug. Deja vu hits me. Why am I here again?

The only difference this time is that my abuser is not my partner, but my teenage son.

Fifteen years ago, I left my teenage son's abusive father. Leaving with my then two-year-old son, I never wanted him to experience that fear. I swore that my son would be different, that I was going to raise him to respect women and treat them as equals.

I was going to be a strong and independent female role model to him. I would educate him on domestic violence and the effects on families. He would never be an entitled man filled with toxic masculinity. But I failed.

Now I am once again trapped in a domestic abuse situation where I cannot escape. Having smaller children, I am again in the position where I am fearing for their safety, for their emotional and psychological wellbeing, as I did for him so many years ago.

How did I get here? What went wrong? It seems like no matter how hard I try to love my son, it is never enough, or I am too much. Once again, I find myself hiding the abuse, my feelings, my hurt.

17 years ago, when I had my son, I was just a teenager myself. I was so in love with his father and thought we would be together forever.

He played games with my heart, manipulated me and lied to me. He became involved with drugs and the control became overbearing, and physical.

I believed I could fix him but I couldn’t. For the five years we were together I told myself, “it will get better when… he gets a job, when the baby is born, when we have our own home, when...” It never did.

The day he threatened my life in front of our two-year-old with a weapon for my $300 rent money, I knew I needed to leave. I fled to a refuge with a few items. It was hard, and I was grieving the life I thought we were going to have.

I continued to work on myself to provide for my son. To make him proud of me. All that hard work and pain felt pointless when he told me I should have stayed so he could have a dad. It broke my heart.

I would have died staying. He would rather me dead than leaving. He wasn’t proud, he didn’t think I was strong. He resented me.

Over the years we were so close. We talked about everything and spent a lot of time together. He didn’t like being away from me, and I felt I needed to keep him safe from the world.

Deciding to have more children was tough and I felt a lot of guilt, but he didn’t seem too concerned and was growing up and becoming more independent. He started hanging out with friends and socialising.

He would share stories of other kids at school doing drugs and reassure me that he didn’t see the point and didn’t want to be like that.

His behaviour started to change, he became depressed and started to self-harm. I set up supports and services to try to help him, but his behaviour escalated.

He confessed that he was using drugs and would alternate between wanting to stop to not seeing the problem.

For the last two years we have been on a rollercoaster of hell. One moment he abuses me for not helping him enough, not caring about him, not being a good mother, to him laughing in my face that I bought his lies and that I’m so gullible. No matter what I do, it is not good enough.

When your abuser is your child, how do you stop loving them? How do you protect yourself? How do you protect your other children? This journey has been slowly breaking me down, that I don’t even feel like myself anymore. I feel like a failure, like a fraud. How could my child turn out like this?  My son is on a path of self-destruction and I am scared for him and scared of him.

Any situation that causes him frustration or isn’t going the way he wants it to he loses control. He starts throwing things and breaks his phone. He becomes angry at himself that he broke his phone and starts punching his door and puts holes all through it.

His siblings start crying and becoming afraid. If I stand in front of him to stop him from breaking things, he pushes me or picks me up and drops me on the ground. He screams in my face and calls me the worst names he can think of, telling me I should just kill myself.

I never thought my child would do this. We were so close. I raised him to be loving and caring. And every last part of that loving child is gone.

I was sure that the way he was raised would stop him from becoming his father, but it hasn’t. I never thought I would be scared of my own child.

Reply
Upvote
2 upvotes
You are very brave sharing this story and I hope that it helps others.
You haven't failed as a mother.  Drugs can come and take children from any family.  The people criticising you are lucky and don't even have the grace to acknowledge it.  It is very easy to be a parent until you are in a situation yourself.
You will get through this one step at a time, rely on the services that you are linked with (I know they are inadequate and difficult to access), they aren't a magic bullet but they can help you and your other kids to cope with this situation.
Being a good mum doesn't guarantee perfect kids or an easy road and we should all remember that because we don't know what is around the corner.
Bless you and thank you. xxx.
E
ella 2 years ago

Reply
Upvote
1 upvotes
My brother emailed me this article, and said: " Same as your story".
You are a very brave caring mother. Keep on working on your self, don't give up.
My neighbor once told me " there will come times when you love your children, but you don't like them"
I strongly encourage you to join  "TOUGHLOVE Parent Support Groups".  This was the best thing I have ever done for my family.
Please google  and call them:
http://www.toughlove.org.au
Bless you. xxx
I am happy to talk to you if you need further assistance.
News
General
Opinion
True Crime
Politics
Sport
Explainer
Entertainment
Celebrity
Reality TV
Movies
TV
Books
Rogue
Royal
Lifestyle
Beauty
Fashion
Weddings
Home
Wellness
Health
Fitness
Travel
Food
Family
Before The Bump
Pregnancy
Baby
Kids
Teens
School
Parent Opinion
Work & Money
Money
Finance
Career
Lady Startup
Relationships
Sex
Dating
Separation
Friendship
Family
Real Life
Couples