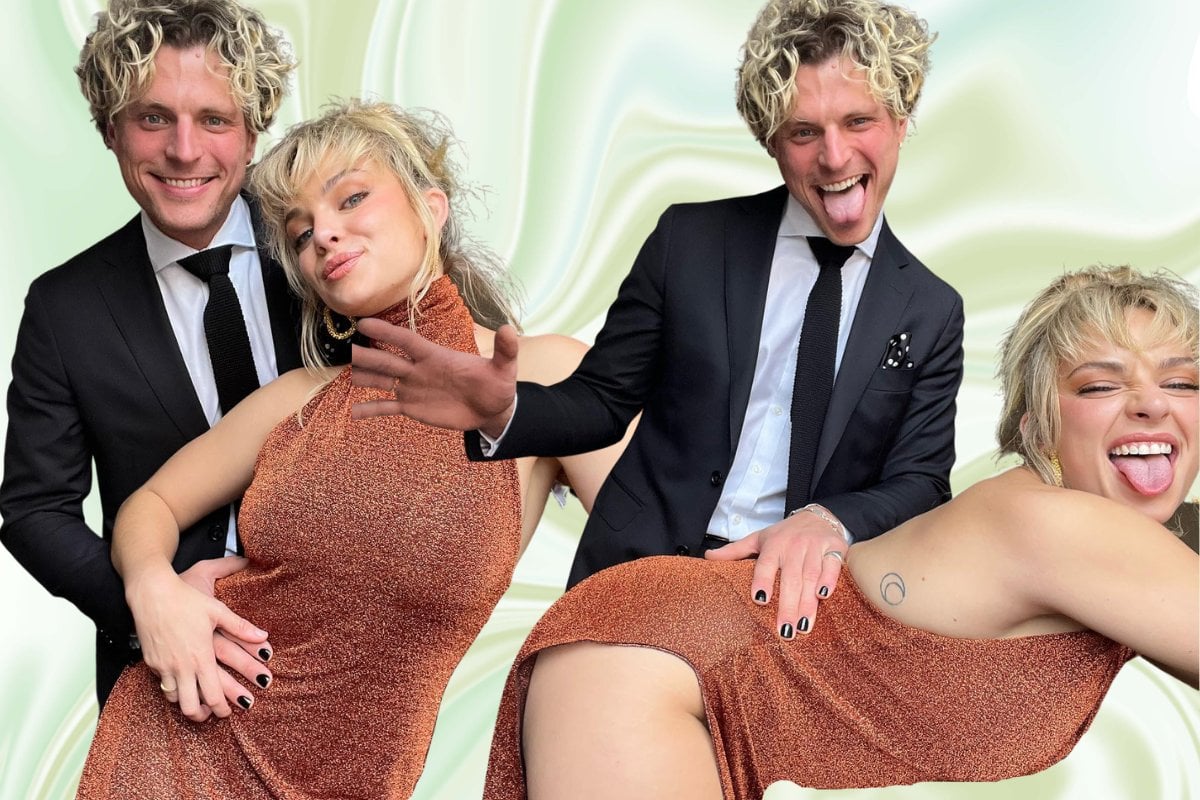 Before they met, they were both contestants on reality TV dating shows. Their respective experiences on The Bachelor and The Bachelorette saw them both compete against other men and women for the love of one person.

It meant they had an innate understanding of non-monogamous relationships and reality TV when they met, just weeks after Konrad exited Brooke Blurton's season of The Bachelorette.

It was perhaps unsurprising then that the relationship which eventuated between the pair was 'open' before it had even begun.

"We spoke about [having an open relationship] when we met before we'd even kissed," Abbie tells Mia Freedman on a bonus episode of No Filter.

"After about two weeks, we were like, 'Okay, well, if we're gonna be together we probably should be open'. And then we were like; Okay, what are you comfortable with?"

In essence, their open relationship status means that while the pair are in a relationship with each other, they can have sex with other people.

At first, Abbie was hesitant to share that news with her fans, knowing the media was likely to have a sceptical response.

But when logistically sleeping with other people was becoming tricky due to the public nature of their relationship, she announced the pair were non-monogamous on her podcast.

"There's this perception that he's manipulated me, that I'm just a silly woman and he just wants to cheat on me. I have been in open relationships before and he hasn't," she says on No Filter.

"I've tried [to be jealous], because my friends used to say 'when you find the right person you're going to', but I don't think that's true at all. It's my kink."

Abbie shared that not only is she okay with Konrad sleeping with other women, but the idea of her boyfriend receiving pleasure from someone else gets her off.

So, how do they do it? The couple set boundaries or "rules" around what is and isn't allowed.

"We can sleep with other people if we meet them out, [but] it can't be someone you've slept with before. He'd be upset if I slept with an ex-boyfriend, so I would never do that. But I don't mind if he does it," she explains.

"We're still discussing sleepovers, because I think it's incredibly inconvenient [to go home after sleeping with someone, but] it's all about communication."

At the heart of it, Abbie explains, is open communication.

"If [he] met someone out and wanted to go home with them, he'd probably just text me be like hey, do you mind if I go home and f**k this person tonight? I'll be like, Yeah! Or, I'll be like oh no, you know what, I feel a bit sh*t today. Can you come home?"

"We live together, we like have a dog together, and we're working towards a future together. The sex is the only real thing that's different [to a normal relationship], and we still have sex with each other.

"I think I see the relationship as much more than just sex, and I don't see monogamy as the only validation for a relationship that is more than a friendship."

To listen to Abbie Chatfield's full chat with Mia Freedman, subscribe to Mamamia to listen to the bonus episode of No Filter here.