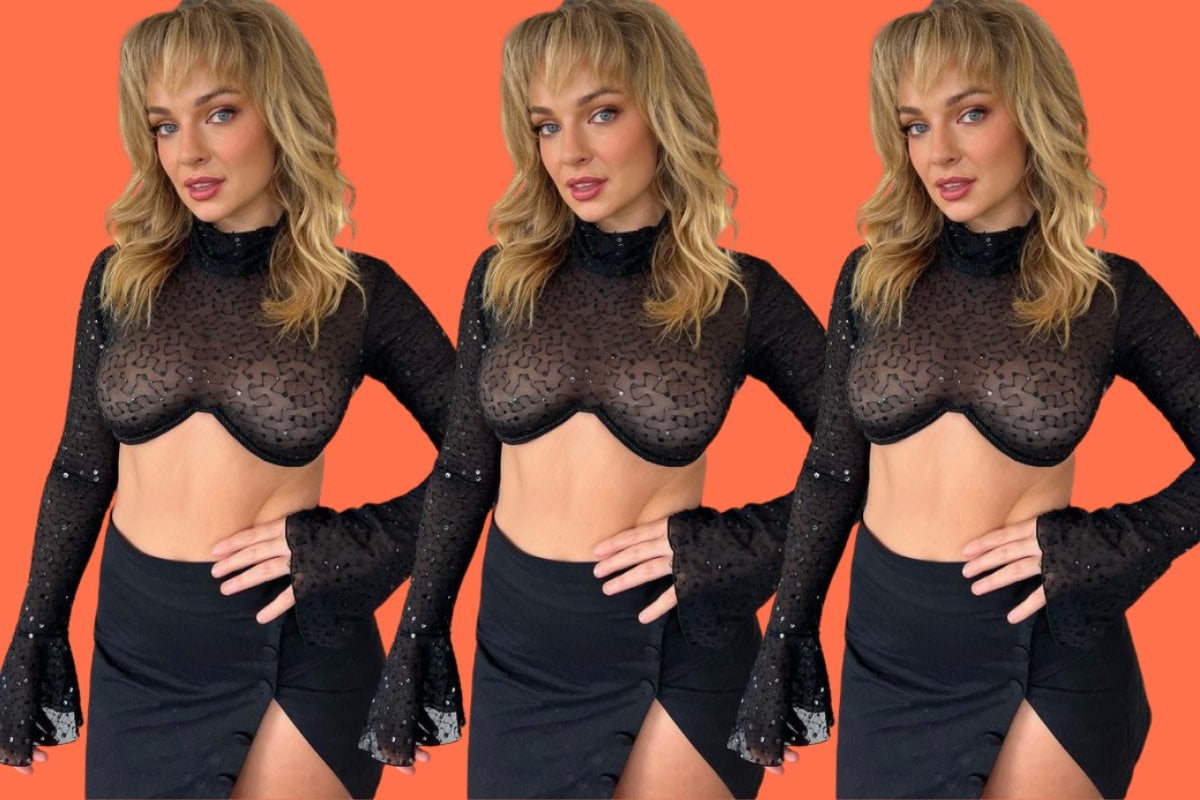 In three short years, Abbie Chatfield has gone from reality TV villain (or hero, depending on which side of the fence you were on) to bonafide star. The former Bachelor contestant is now a television host, radio personality, podcaster, influencer, and all-round champion for young women.

That's no mean feat. Think about it - the number of reality TV stars who have tried, and failed, to prolong their 15 minutes of fame are many.

So just what is it about Abbie Chatfield that makes Australia sit up and take notice? Most women will say it's her propensity to speak her mind and her unflinching attitude towards sex and sexuality.

"People were really mad about it! They were so mad," she tells No Filter host Mia Freedman with a laugh. "People were so very angry at me."

From the very beginning, Chatfield was shamed as a woman who liked and wanted sex. In her first interaction with Agnew on the show, she was portrayed as "this dumb girl with curly hair and big tits, really bubbly, gets the sex music while getting out of the car."

"I remember one of the girls in an interview after the show and the host asked, 'Well, why don't you like this girl? All of you seem to not like her but no one's told me what she's done.' And I actually DM'ed the girls after and said, 'What'd I do to you?' None of them have anything to say. Interesting. But one of the girls said [in the interview], 'Oh, well, you know, she's just so like, young and flirty.' And that was the reason why they all disliked me and thought Matt would never like me. It was just a very chaotic time."

Watch the chemistry between Chatfield and Agnew below. Post continues below.

Getting the "promiscuous" edit was weird to Chatfield.

"My friends and I are all such normal feminists," she says. "What would happen is my friend would take my phone and she would filter out people... she would delete all the bad DMs that I was getting while the show was airing. And then she'd also read out any positive tweets.

For the record, Chatfield and Agnew have spoken privately about everything that happened between them are now firm friends. And no, there's no funny business going on between them. "We're just platonic friends. We literally don't even... we barely hug," she says. "But he's a really, really, really good guy."

The world may have changed a lot since then but even three years ago, the idea of a young single woman wanting to have sex was seen as scandalous.

"And that tied in with the stupid edit - that if you are sexual, then you must also be stupid," Chatfield explains. "And this is something that I wrote about a lot afterwards, when I was able to write some articles for certain publications, and I went on a lot of podcasts. Everyone was like, 'See, she planned her career.'

"But that was just because I was so frustrated. Because all my friends were such strong feminists and we'd had all these slut-shaming talks from when we were 19."

With Chatfield being the youngest contestant on the show that season, she believes the problems between her and the other women came down to a generational clash on how female sexuality is viewed.

"All the older girls that were about 30 had a real issue with it. And even on [reality series] Bachelor in Paradise, two of the girls said to me the reason why I'm single is because I sleep with people on the first date."

While the death threats she received during and after The Bachelor was airing affected her, being called a "whore" or a "slut" did not disturb her in the least.

"In terms of why the words whore and slut, and these sexually charged words don't shame me is because I was a teenager when podcasting kind of really took off. So I had access to privately explore think pieces from women who were slightly older than me," she tells Freedman.

"There's this podcast called Guys We F***ed... I was listening to them from when I was 18 or 19. Whenever they first started, I started listening to them. And their tagline is the anti slut-shaming podcast. I think that was the main reason - because of podcasts like that.

"And my friends and I would talk about these things... I think we just didn't think those words were negative. And then we kind of would sit there and go, 'Well, what's the problem with being a slut? Is the issue that you want to have sex and also that you can have a lot of sex?' The double standard seemed to be very obvious. Those conversations were happening maybe within the zeitgeist when I was a teenager.

"I went to an all-girls school and people would think that would make you more conservative, but in my instance, because it's only women there to have conversations, there weren't any boys to slut-shame us, or to shame us for anything. And there weren't any unsafe spaces to have girl chat. We had a group of 30 at lunch talking about who we f***ed on the weekend.'

"At first it was, 'do you want to be the face of Vush?' And I was like, 'Yeah, cool.' At the time, it was three or four months after I quit my corporate job, and I was still thinking, 'OK, if I can survive month to month, then I won't go back to my corporate job or I'll get another degree," Chatfield says.

To listen to more No Filter podcasts, click here.

Reply
Upvote
Abbie is by far the best thing to come out of the Bachelor franchise.
K
kerrir0612 a month ago