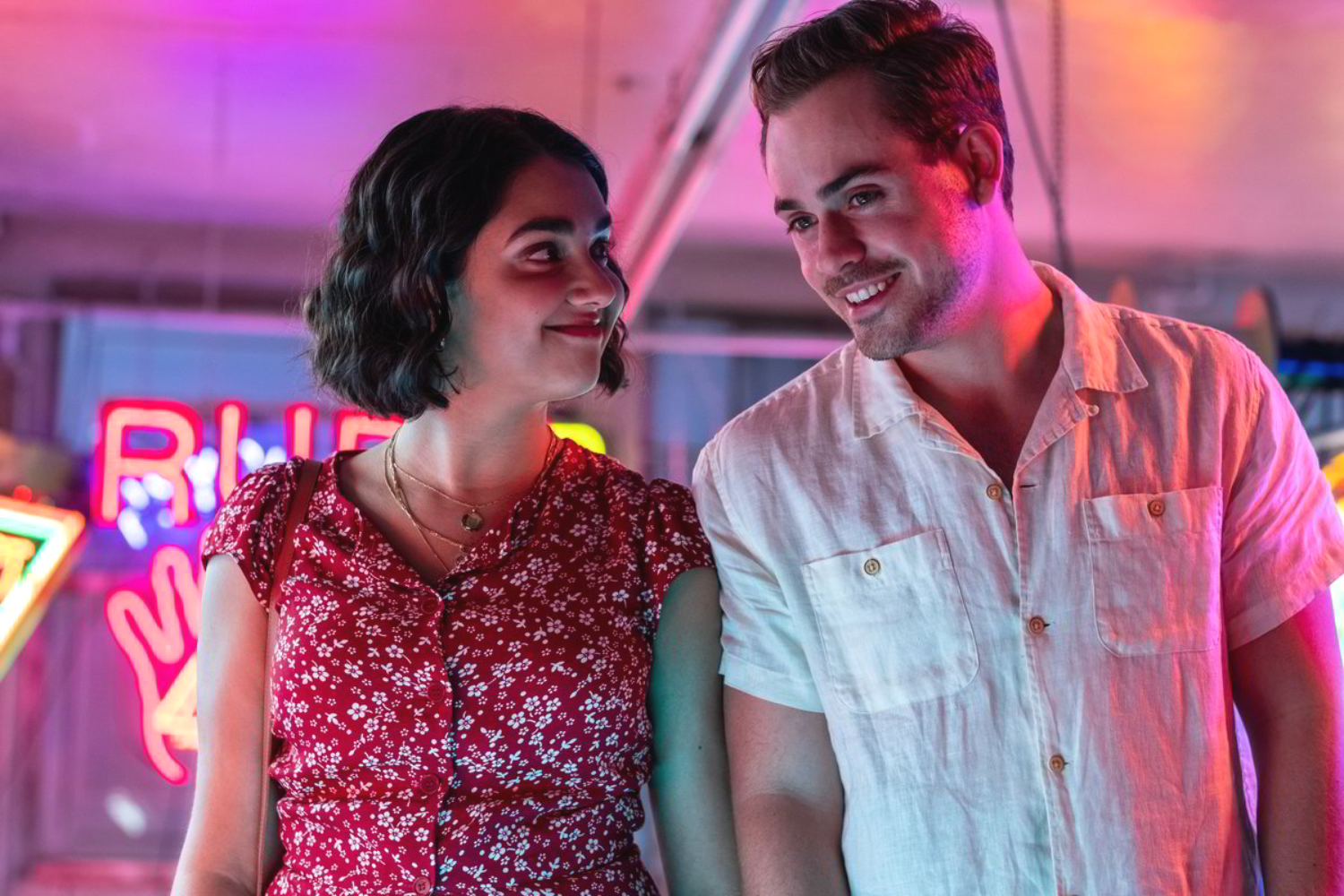 For anyone living through the fresh hell that is 2020, it was sure going to take a special kind of romantic comedy to sweep us away for a few hours of sweet escapism.

Luckily for us, The Broken Hearts Gallery is just that sort of movie.

Set in New York City, a town that is no stranger to playing a supporting role in a good old rom-com, The Broken Hearts Gallery stars Australian actress Geraldine Viswanathan as Lucy, a 20-something art gallery assistant with a slightly odd habit.

So invested is Lucy in the memories and significance of her past romantic relationships that each time one of them ends she stores away all the mementos from the relationship. To the extent that her bedroom is now practically a shrine filled with everything from old shoelaces to cups, a thimble from a Monopoly game and even an old piggy bank that reminds her of her past loves.

It's these heightened feelings of emotion that lead to Lucy having a very embarrassing public moment at a fancy work function, where encounters with her boss and a colleague she's just started to fall for leave her running through the streets of New York in tears.

So often, the crux of good rom-com hinges on the all-important 'meet-cute' - the special set of circumstances that are weaved into the movie in order to bring the lead characters together in a way that will set them up to fall in love later on.

In this case, the meet-cute is a distraught Lucy throwing herself into the back of a waiting car she thinks is her Lyft ride only to be confronted by a very surprised Nick (Stranger Things star and fellow Australian actor Dacre Montgomery) who is in fact not a Lyft driver and therefore quite shocked to suddenly have a sobbing woman take up residence in the backseat.

Seeing how distressed she is, Nick drives Lucy home anyway and after a slight moment of confusion where she realises he's not an authorised driver and accuses him of kidnapping her, the two go on to build an unlikely friendship. 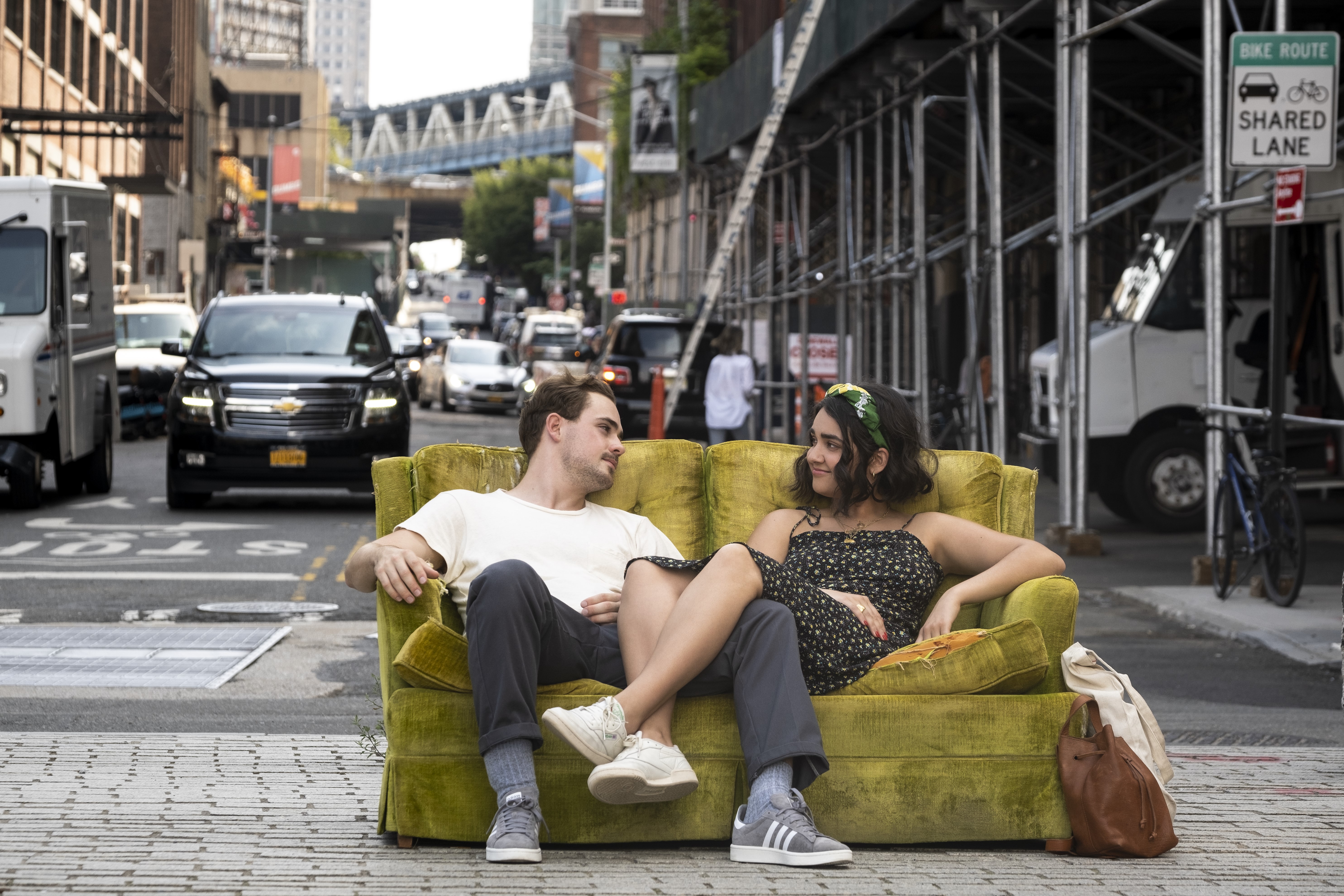 The quiet and straight-talking Nick is in the middle of remodeling an old building into his dream hotel while a freshly unemployed Lucy sees the artistic value in her collection of past relationship treasures and begins to set up The Broken Hearts Gallery within the walls of Nick's hotel. A place where the items from people's past relationships can be honoured for the true significance they hold.

It's an idea that is based on a true story from 2006 when Croatian artists Olinka Vištica and Dražen Grubišić commemorated the end of their relationship by collecting sentimental items that reminded them of to their time together and encouraged other friends going through heartbreak to do the same.

Together they assembled the Museum of Broken Relationships, which you can still view online today.

It's this thread of heartbreaking honesty, mixed up with a witty script and characters that worm their way into your heart like a stray piece of movie popcorn nestled in your bra, that makes The Broken Hearts Gallery such a beguiling and enjoyable film.

It's also a testament to the movie's DNA, which was written and directed by Natalie Krinsky, that it's so seamlessly able to lean into pre-loved rom-com patterns without lazily falling back into outdated character tropes.

Which is exactly what drew leading lady Geraldine Viswanathan to the film.

"Natalie our director always said to me that Lucy asks the world to love her not despite her being weird, but because she is weird," Geraldine told Mamamia when asked how the character differs to previous rom-com women. "I always thought that was really important.

"The movie has a lot of nostalgia moments and ideas from past romantic comedies that we know and love but it also has a fresh voice and energy. I think Lucy is really a part of that, she’s relatable and is very much a modern woman." 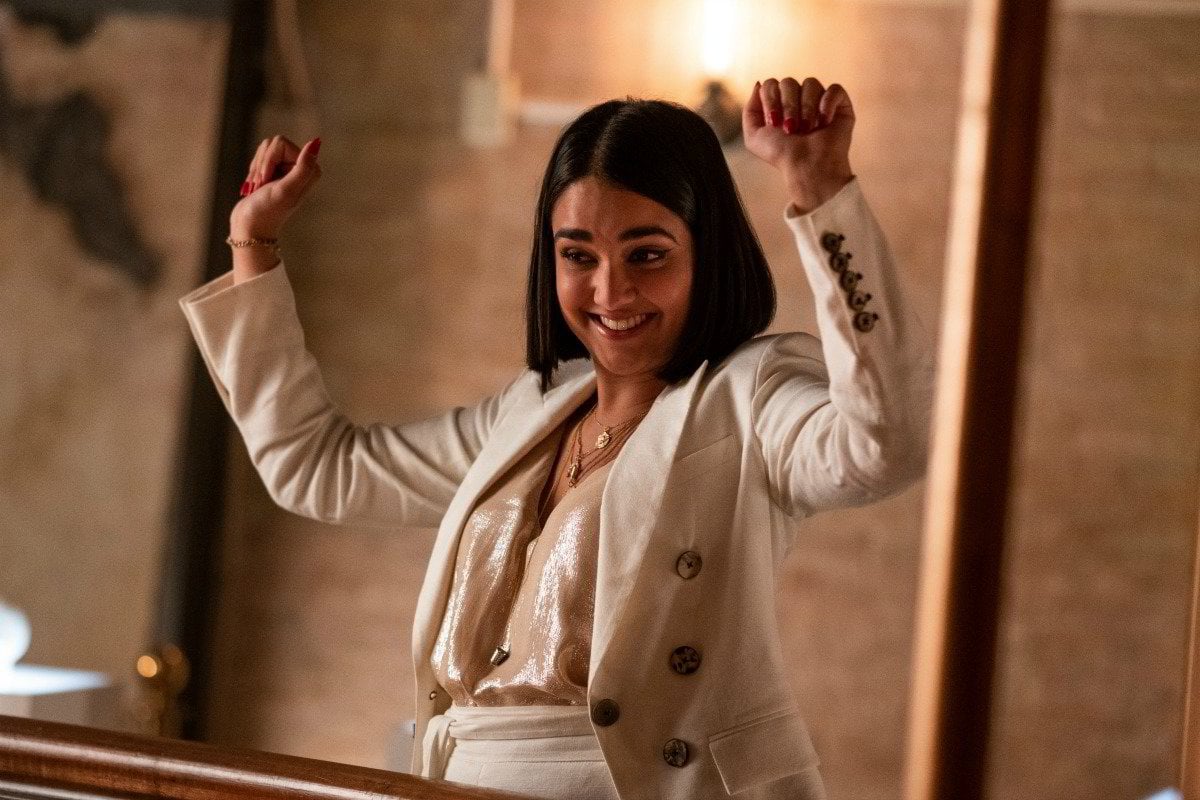 "Natalie our director always said to me that Lucy asks the world to love her not despite of her being weird, but because she is weird," Geraldine Viswanathan told Mamamia.

One of the most enticing parts of watching The Broken Hearts Gallery is that as a viewer you want the characters of Nick and Lucy to fall in love not because the movie tells you to, but because you can feel their opposites-attract chemistry slowly but steadily building on screen.

"It was really lovely to work with Darce and there is always this sort of instant familiarity that happens when I work with other Australians," Geraldine said. "We met for the first time in our chemistry read and we instantly had a really good rapport, which I think you see on screen in Lucy and Nick’s relationship.

"Our dynamic in real life actually ended up mirroring Lucy and Nick’s dynamic in the movie," she continued with a laugh.

"With Darce, this is his first comedy, and we talked about the fact he was quite nervous and he was really in his shell.

"So with the character of Lucy in the movie she is really trying to bring Nick out of his shell and that’s what ended up happening on set with me and Darce.

"Like in the karaoke scene in the movie, for example. On the day Darce was just terrified to film it, so I really had to act like Lucy and be supportive. I just kept saying ‘you can do it!’ and I told him he needed to just let loose and enjoy it."

Geraldine, an Australian actress of Swiss and Indian descent who had a breakout role in the comedy Blockers, followed by a leading role in the Stan series Miracle Workers, hopes that her leading turn in The Broken Hearts Gallery will inspire young Australians to follow their dreams into working in the arts.

Romantic comedies, in particular, have a long and dubious history of predominantly casting white actresses in the lead roles, but thankfully Geraldine acknowledges that the tide is starting to turn.

"It was really a special experience for me to be on such a diverse set and to be given this opportunity to be the lead of a movie and to not have my ethnicity be a defining characteristic," she told Mamamia. "That’s exciting and something we are starting to see more of.

"I hope that people watching The Broken Hearts Gallery feel inspired to strive for what they want and not feel limited by any sort of past conventions we’ve become used to."

There's truly a streak of magic in The Broken Hearts Gallery and after this year, it's the sweet escapism we all need.

The Broken Hearts Gallery opens in Australia Thursday, September 17. It is rated M.