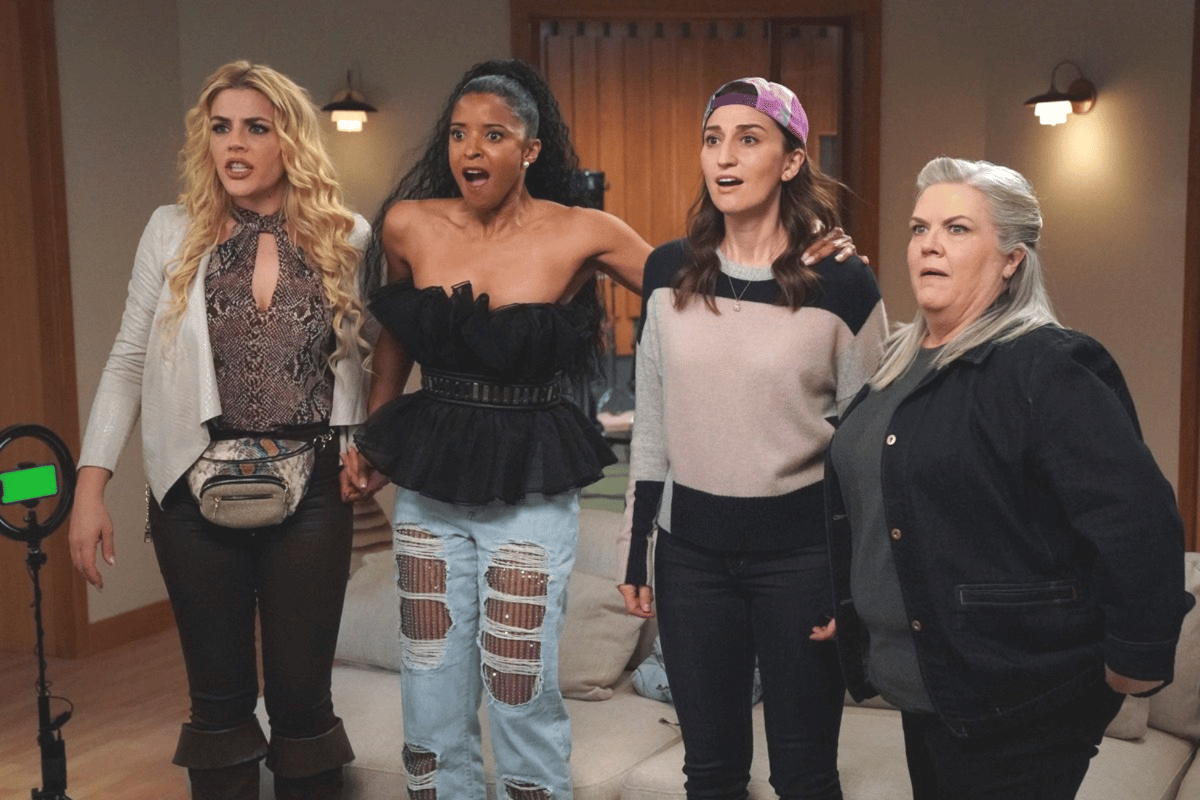 It's easy on the ears (and in this case, also the eyes) but under its upbeat, frothy exterior lies a worthy message of female empowerment and friendship.

Most of the time.

Girls5eva was created by Meredith Scardino, known for her work on Unbreakable Kimmy Schmidt and Saturday Night Live and executive produced by Tina Fey, whose comedy touch can be felt throughout the series and who makes an unforgettable guest star appearance later in the season.

The show picks up over a decade after manufactured pop group Girls5Eva have all gone their separate ways after a brief stint of stardom.

Take a look at the trailer for Girls5eva on Stan.

Dawn (Grammy-nominated singer-songwriter Sara Bareilles), who was the group's aspiring songwriter back in the day, has put all of her failed musical dreams on hold and is now a wife and mother working a shitkicker job at her angry brother's restaurant.

Gloria (Saturday Night Live writer and comedy legend Paula Pell) is working as a dentist and feeling a little lonely being one half of “the first gay couple in the state of New York to get divorced”.

The only member of the gang who looks like she is still living the high life as an Instagram star and designer is Wickie (Broadway star Renée Elise Goldsberry who originated the role of Angelica Schuyler in Hamilton) but we soon learn that her glamorous life is nothing more than smoke and filters.

The women are pulled out of their forced retirement when hip-hop artist Lil Stinker (Jeremiah Craft) samples their one hit song 'Famous 5Eva' (mostly because it was cheap) and reunites the women as his backup singers for a one-off TV performance. 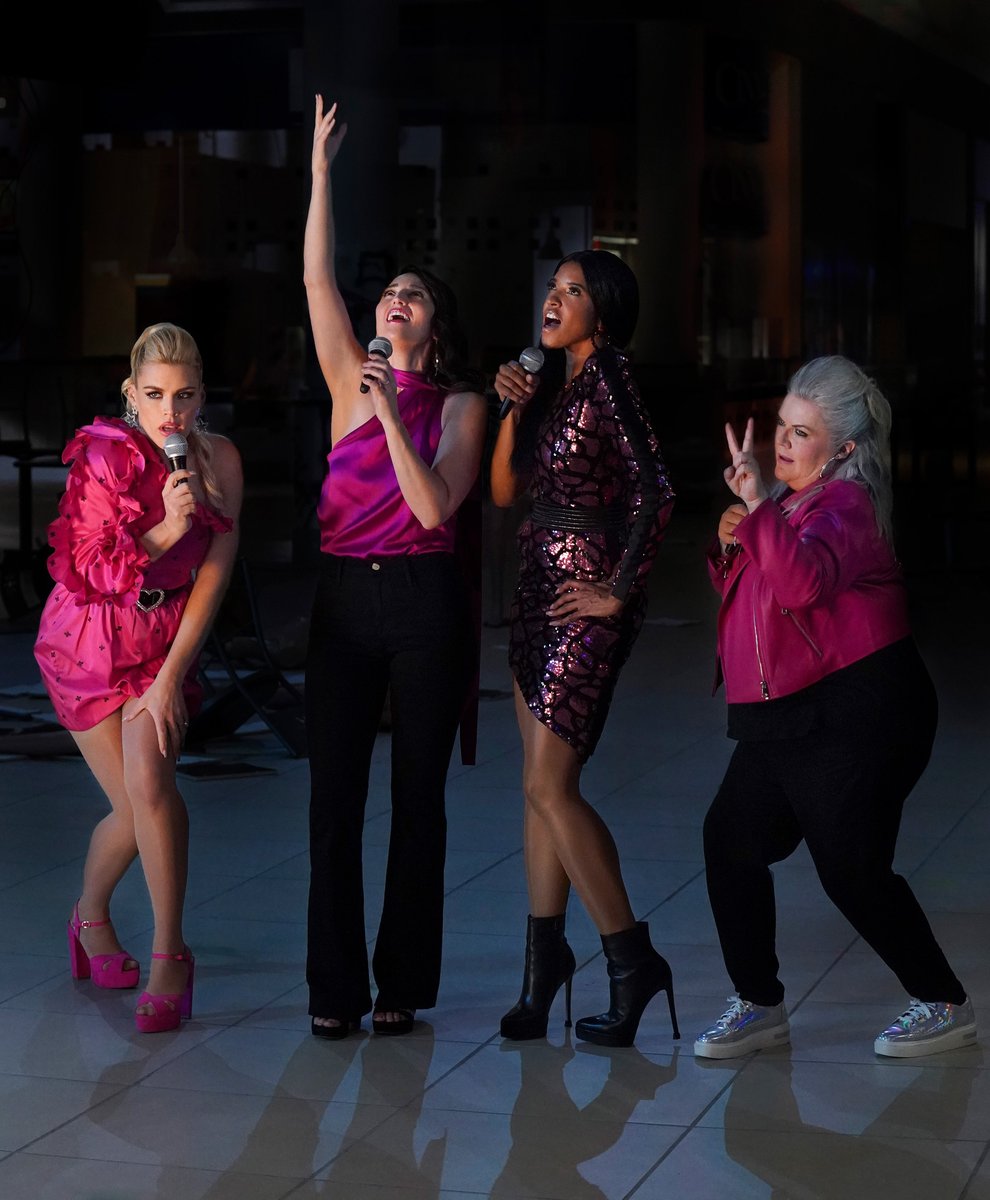 Except this time around they have to do it on their own because "no one wants to hear from women over 35" and they are all in their forties.

Just as you'd expect from a series crafted by the hands of Meredith Scardino and Tina Fey, Girls5eva is brimming with an onslaught of jokes and rapid-fire one-liners, all while sharply poking fun at late ‘90s pop and the antics of Gen Z TikTok fanatics.

Aside from tunes that sound like they could have been ripped straight from a budget version of the Spice Girls (honestly, you'd be hard-pressed not to have 'Famous 5Eva' swirling around in your brain for a week), it's the cast that really makes this new drama (quite literally) sing.

Sara Bareilles' Dawn and Renée Elise Goldsberry's Wickie bounce off each other with excellent on-screen chemistry that perfectly encapsulates a certain enemies to best friends fever you only ever find between longtime colleagues turned comrades.

But it's the moments they sing together that really shine, because in amongst the satirical, frothy pop hits are a series of true musical moments that could only truly be brought to life by Bareilles and Goldsberry, two of the most powerful voices in the entertainment industry.

In the same vein, the two characters also brilliantly bounce off the enthusiastic but unfortunately can't-quite-sing Summer, a character perfectly brought to life by veteran comedy star (and now Instagram standout) Busy Phillips, who delivers her series of one-liners with such perfect timing that she elevates the character of Summer to more than just the generic ditzy blonde.

Throughout her decades-long career, Paula Pell mostly made a name for herself behind the comedy scene (she's credited as a writer on everything from Bridesmaids to This is 40 and 30 Rock) but thanks to her recent TV and movie outings it's clear she also belongs in front of the camera.

Pell takes big comedy swings when it comes to bringing Gloria, the most outspoken of the group, to life. Whether she's dancing on stage or dialling into a rehearsal while also performing emergency dental surgery, Pell's performance hits the right note at all times.

Girls5Eva is a soothing, easy watch, that will also probably make you want to pick up the phone and call your oldest friend.

It's also brilliant to see actresses in their forties and fifties telling this story, making big comedy swings, and reminding us that there's no age limit on chasing a crazy dream.

All eight episodes of Girls5Eva are available to watch now on Stan.

Reply
Upvote
1 upvotes
I have legit been singing "gonna be famous 5eva" all day! They really nailed that early 2000s girl group sound, I could quite easily imagine someone like B*Witched singing something like this!