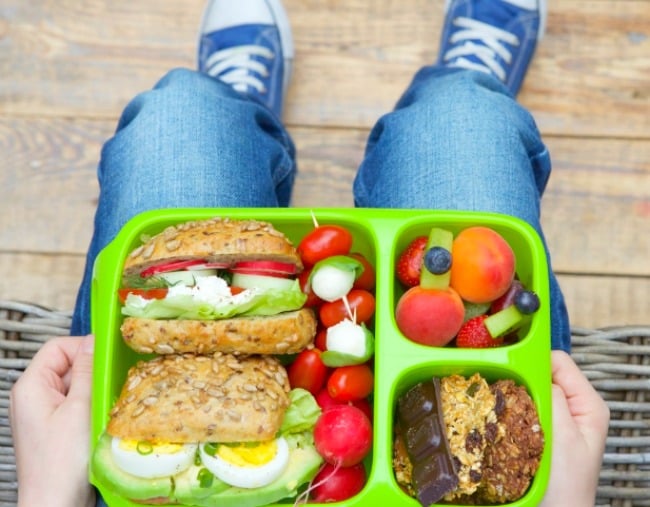 But then my husband and son stopped on the way for a coffee, and that’s when my almost-five-year-old made a request that would change the course of exactly no-one’s life, but was destined to ruin a few hours of my day.

“Daddy, can I have a doughnut to eat at school?”, the little ratbag asked, knowing full well the answer would be a yes from his very amenable father.

So off they went to pre-school, one pleased they got their way (and very much looking forward to eating the world’s largest doughnut at recess), and the other completely oblivious to the shitstorm that his weakness/desperation to be the best dad ever, would soon cause his wife.

Indeed, it was hours before even I got a hint of that shitstorm…which would later become known as #doughnutgate.

This Glorious Mess discusses: if your kids are taking a popper and a cupcake to school, prepare for a note home from the sugar police. Post continues after.

That hint came at 3:25pm, in the form of an angry text from my sister, who was collecting my kid because I was in a meeting.

“JUST GOT SERVED A HEAP OF SHIT FROM THE TEACHER IN FRONT OF THE OTHER PARENTS BECAUSE OF YOU,” she calmly texted.

“Why did you send W with a GIANT CHOCOLATE DOUGHNUT for recess?????”, she continued, the multiple question marks indicating her mild curiosity.

She then explained that the teacher had pulled her aside at pick up, “loudly” asking her to tell me that the treat was a “highly inappropriate substitute for a meal.”

“WTF are you talking about????”, I hiss-texted back, knowing full well with every fibre of my being that my husband had gone rogue.

No response…because she was busy calling my mother.

And so, soon enough my mother called. She was "not angry, just disappointed" that I would pack such nutritionally-void food for my precious son while he was trying to learn.

I couldn't believe my sister had dobbed on me. Typical.

But alas, it would be only the first of three unpleasant phone conversations I would have in the next two hours. Because then, the head of my son's preschool called.

"Children need fuel for their brains," she lectured.

I tried to blame it on my husband, but she wouldn't listen. Her ears were too full of self-righteous indignation.

"The doughnut quite simply should not have been there," she replied.

No shit, Susan (that was honestly her name), I thought.

Look, I am not a role model mum in any way. I provide my son nutritionally balanced meals from Uber Eats multiple times a week. I figure, he's growing (at 11 years of age, he's now my height), and he's not overweight, so Lord knows how, he's thriving.

But, still, even I can see that he doesn't need a Mars Bar between Maths and Music. Even I agree that such a calorie-dense snack isn't necessary at school.

And also, because even though "I'm not a regular mom, but a cool mom", I still generally respect the school's policies.

That's where my son's dad and I differ.

Fast forward 8 years - dinner at the same place in a city now our home - I discover this little light of mine is growing a moustache.????????????????‍♀️ #stopit #butalsoproudaf

In his defence, like most men, my husband was equally capable of looking after a kid as I was; but also like many men I know, he didn't always get school policies/politics (no matter how many notices were sent home about them).

Which is why I don't really blame him for #doughnutgate, despite it being entirely his fault.

And so I didn't mention it to him until after I got the last phone call that afternoon - from a parent at my son's preschool.

"A few of us would prefer you not to send those sorts of treats for your son," Emma began.

"It just makes it more difficult for the rest of us. Charlie asked for a doughnut the whole way home."

Omg, your child asked for a treat after school? How unexpected. You poor thing.

You want to know the worst bit  about #doughnutgate? My son didn't even get to eat the bloody thing. He had one bite, and a teacher swooped.

The worst bit is it ended with me, at 9:30pm that night, cleaning out a sticky, melted, massive chocolate doughnut (missing one bite) from my son's lunchbox.

And that, my friends, is how one not-so-innocent doughnut broke me.

D
Donuts are Awesome 4 years ago

Not sure I would want to send my child to a school with such an unpleasant culture.

It’s a donut (pity it wasn’t still hot as even more delicious) not an entire lunchbox of sugary stuff! Even the dietary guidelines talk of the importance of balance and moderation.

lol @ blaming the father. The entity at fault is the school and its employees. Had this happened to me, I would make it a point to send a treat with my son at least once a week, and tell him that he doesn't have to give it up, and can use violence if necessary, if a teacher tries to steal it.