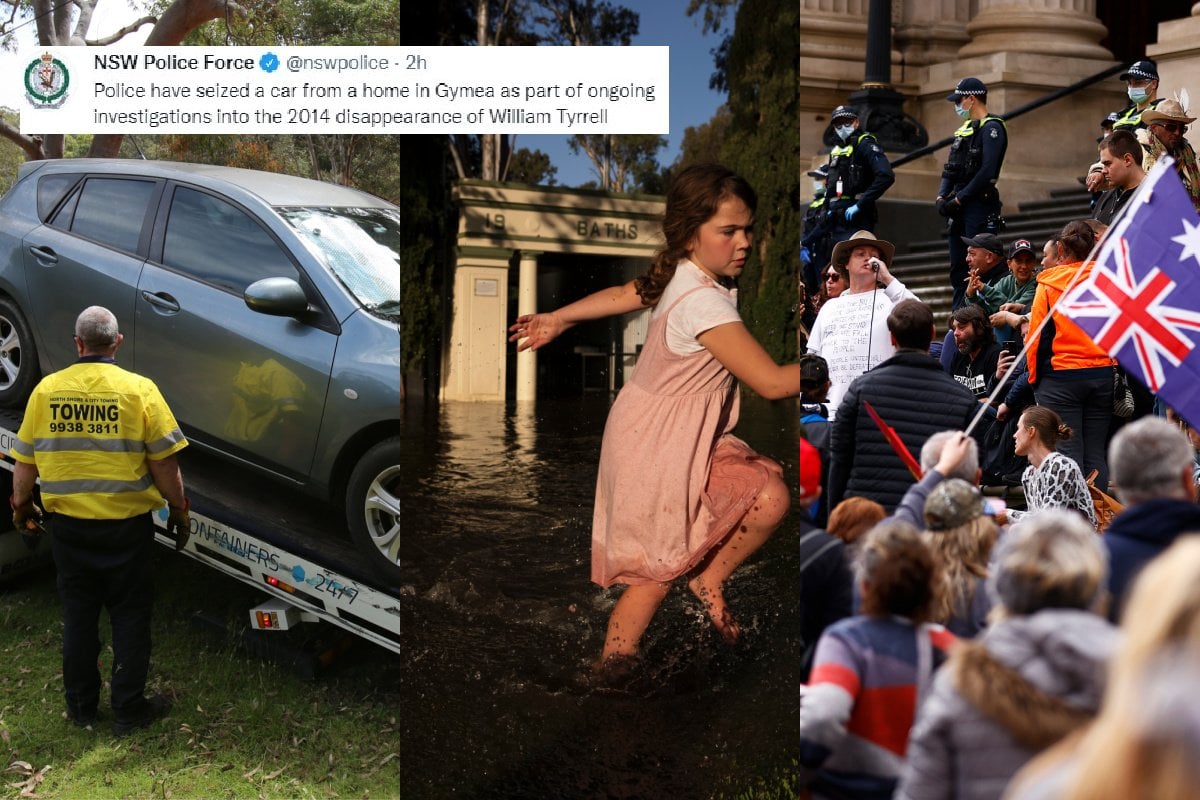 The search for the body of missing three-year-old William Tyrrell on the NSW mid-north coast has entered its third day, as detectives continue to scour the property where he disappeared.

The case of the boy who went missing in his Spider-Man suit has captured the nation's attention since he disappeared while playing in the garden of his foster grandmother's home in 2014.

Police on Tuesday dug up the garden at the Kendall home, with a mechanical sift brought on to the property.

In nearby bushland volunteers cut down trees to help in the search.

Police today returned to search the Kendall home where the three-year-old boy was last seen and are investigating whether he fell from the balcony. https://t.co/siBGRe2eZq

Officers revealed on Wednesday morning that detectives had also seized a Mazda car from a Gymea home.

They said the car was taken to a secure facility for forensic examination which was expected to take several weeks.

Police have seized a car from a home in Gymea as part of ongoing investigations into the 2014 disappearance of William Tyrrellhttps://t.co/x6ai4dIrje pic.twitter.com/RSdbm9XuCH

Police Minister David Elliott was asked about a report that police were investigating whether William died after falling from a balcony at the house.

"With a mysterious incident like this, every single option has to be investigated, every scenario has to be reviewed and tested," he told reporters on Tuesday.

"Let's hope whatever the conclusion is gives closure to the families and community."

Police Commissioner Mick Fuller confirmed there had been a significant breakthrough in the case, saying he was confident police would solve the mystery of the boy's fate.

Controversial pandemic laws are being debated in the Victorian parliament as protesters maintain their presence outside, after several conducted a mock execution of the premier overnight.

Debate on the Public Health and Wellbeing Amendment (Pandemic Management) Bill began in the upper house on Tuesday afternoon and is expected to continue until the end of the week.

The bill, which gives the premier and health minister the power to declare a pandemic and make public health orders, is all but guaranteed to pass after the government made amendments to secure the support of three crossbench MPs.

But it has become a lightning rod for anti-lockdown and anti-vaccination groups, with hundreds of protesters planning to camp out on the steps of parliament for the duration of the debate.

Police are yet to receive a complaint about protesters who gathered around wooden gallows and chanted "Kill Dan Andrews" outside Victorian parliament.

A video posted on social media on Tuesday morning shows the protesters gathered around a wooden gallows chanting "Freedom", "Traitor", "Kill Dan Andrews" and "Hang Dan Andrews" while attempting to place the head of an inflatable doll of the premier through the noose.

A Victoria Police spokesman told AAP they were yet to receive a complaint about the incident. If the premier or another person made a complaint to police and felt it was a legitimate threat, police would investigate it in line with the Crimes Act, he said.

Daniel Andrews wife Catherine has posted about the chaos on Twitter.

We have received so many beautiful messages today from all over. Thank you. We are reminded that the light shines in the darkness and the darkness will not overcome it. As ever #IStandWithDan #GoHigh

The NSW premier has put off a call on extending the state's emergency powers until next year, as protests in Victoria rage.

It's understood Health Minister Brad Hazzard this week sought changes that would make it easier for the state to force quarantine or self-isolation on people exposed to COVID-19.

A coronavirus outbreak in the Northern Territory has renewed concerns about the low vaccine take-up in regional Western Australia and prompted fresh border controls.

Nine Indigenous people have tested positive in the territory's latest outbreak after the virus was carried into a remote community.

WA authorities have responded by declaring the NT a low-risk jurisdiction under changes that came into effect from 4pm local time on Tuesday.

WA has so far avoided any outbreaks in its remote communities, most of which have remained closed to tourists for more than 18 months.

But the low rate of vaccination in northern WA is a significant concern as the state eyes a late-January or early February reopening of its borders.

In the vast Pilbara region, just one in five Indigenous people are fully vaccinated.

The federal government is funding a new campaign aimed at increasing the take-up in remote parts of WA, beginning with the Pilbara.

Television personality and Yamatji man Ernie Dingo will travel to communities and meet local Aboriginal people in a bid to address concerns about the vaccine.

The vaccine rollout in remote parts of Australia had been hampered by a lack of supply, but this is no longer thought to be an issue.

WA has not ruled out keeping remote parts of the country closed to travellers even once the interstate borders are open, should regional vaccine rates not improve.

Hundreds of people in Forbes have spent an anxious night evacuated from their homes, after a swollen river surged into the central west NSW township.

Some 1800 residents were on Tuesday morning ordered to evacuate by the State Emergency Service, which was concerned the river levels would match or exceed major floods in 2016.

SES Commissioner Carlene York said 800 homes may be flooded, as she pleaded with a handful of reluctant locals to evacuate.

Moderate flooding has already occurred upstream at Cowra, and major flooding at Nanami, where the river peaked at more than 12 metres.

The agricultural cost of the floods is starting to be counted, with farmers expecting a damage bill of hundreds of millions of dollars.

A Perth family of four has been rescued from the Simpson Desert in South Australia's outback after being stranded there for several days.

The Zavros family had been stuck in the desert since last Friday after their campervan became bogged due to heavy rain.

Roads near the scene, about 150km north of Oodnadatta, have been flooded and inaccessible.

A South Australian police helicopter was dispatched on Tuesday morning to retrieve the family, who were lifted to safety around 4pm local time.

The two adults and two children are safe and well and had been in regular contact with authorities, SAPOL said in a statement.

They will stay the night in Coober Pedy before making further travel arrangements.

Authorities used a rescue plane to drop off a satellite phone and essential supplies after the family activated an emergency beacon on Friday.

- A senior British Conservative politician has accused Prime Minister Boris Johnson's father of touching her inappropriately at the party's annual conference in 2003 when they were both parliamentary candidates ahead of an election.

- Millennials, Generation Z and developers may soon be banking on cryptocurrency to buy their first home.

- Prince Charles and Camilla are in Jordan for a tour. They will also head to Egypt, and will engage in discussions on climate change, inter-faith dialogue, female empowerment and efforts to preserve cultural heritage.