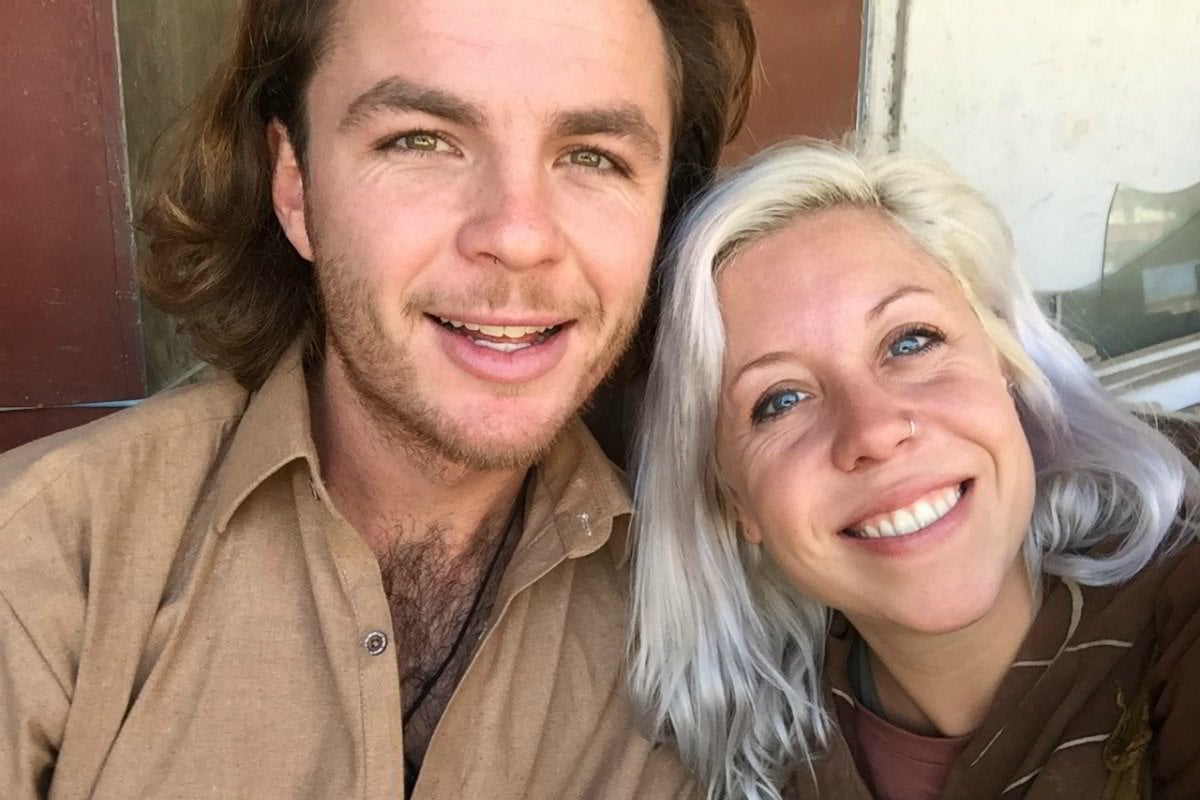 When Charlie Gray closes her eyes and thinks about where her boyfriend is right now, she pictures him on land stranded on a remote island off the coast of Japan with his 39 crewmates, waiting to be rescued.

27-year-old William Mainprize has been missing since September 2, 2020, when the live export ship he was working on sailed into the path of a typhoon in the East China Sea.

He is one of two Australians missing, the other is Queensland vet Lukas Orda, and so far there have only been two rescues and one confirmed fatality. But there are still four rafts and one lifeboat missing from the wreckage - that's 115 spots for just 40 people.

"Especially if they're spread out in those vessels they would have a decent amount of rations to last for a while," Charlie, 30, told Mamamia.

WATCH: Emma Orda, the wife of the other missing Australian, has issued this video statement. Post continues after video.﻿

There's fishing gear on board, and apparently on the islands near where they capsised, there's plenty of small fish that the crew could catch.

"The real hope is that they've landed on one of the many small islands in the region and that they're just sustaining themselves until they're rescued. There's this concrete hope, but then this desperation that time is running out," she said.

Charlie wants to make it clear that she and Will's loved ones aren't just holding out hope "because we're so desperate to have him home."

"We also have real reason to believe that they're out there, even just based on the facts. In regards to this situation, he's highly trained and has so much experience in survival and in intense weather conditions. Myself and those who love him have a lot of confidence in his abilities to make it through a situation like this." 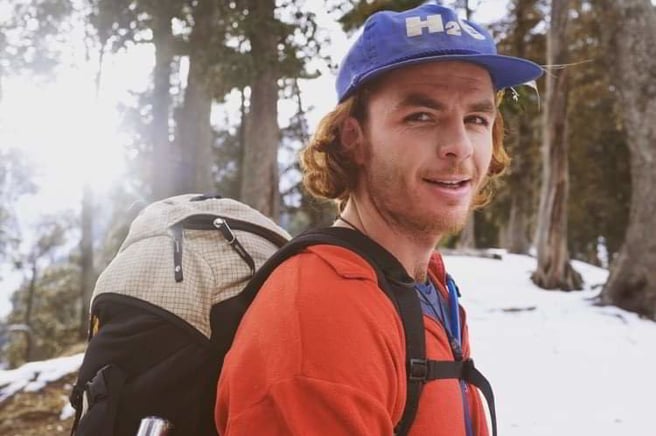 William Mainprize is one of 40 crew members still missing after an export ship sunk in the East China Sea on September 2. Image: Supplied.

Two independent maritime experts who have put together where they think the crew might be, have both come up with the same area. But it's a different area to where Japanese rescuers were looking before the search was scaled back by the country's coast guard last Wednesday.

Will's loved ones are currently (along with the relatives of the other crew) trying to get the Australian and Japanese governments to resume the search in a more north-easterly direction.

More than 51,000 people have signed a petition begging for the search to resume, with Charlie explaining that they also need help right now trying to get the Japanese media aware of their plight.

"We're also trying to access satellite technology. We have one company, but we need more help," she said.

But speaking to the ABC, State Member for Traeger Robbie Katter said there had been little action from the federal government's side of things.

"I'm angry — how do you wait four days to send a plane out to look for people that are lost at sea?" he told the publication last week.

When Canadian born Charlie first spotted New South Wales native Will on a boat in Egypt a year and a half ago, it was his "wild strangly mat of hair," that first caught her attention.

They got talking, and turns out he had just finished a trek through the Egyptian desert, with plans to tackle Pakistan next. He told Charlie about his adventures through the Middle East and Mongolia and the pair quickly fell in love.

"I was automatically like 'you are amazing'. Both of us have a love for the planet and the environment and people and we quickly bonded. It was a kindred spirit connection," she described. 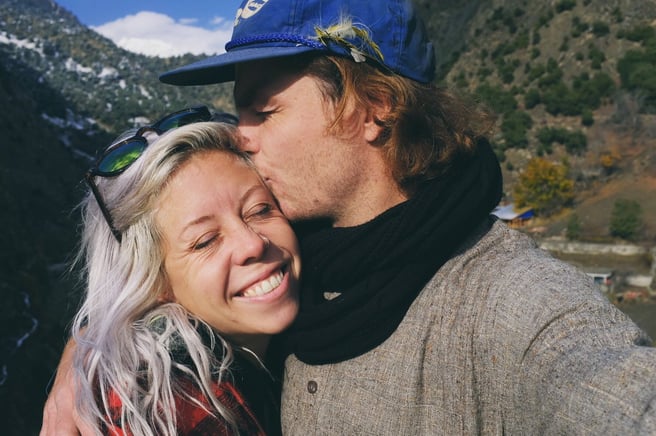 Charlie and Will had been counting down the weeks until they would be reunited, and could start their lives together, when the ship went down. Image: Supplied.

By trade, Will is a wilderness guide, but also has an intense love for animals, and had throughout his 20s taken many jobs on export ships ships as a stockperson - responsible for monitoring the welfare of the animals on board.

With his first love currently not an option thanks to COVID-19, the ships were filling his time until Charlie joined him in Australia and they started their new life together. The current voyage he was on from New Zealand to China was supposed to take 17 days.

Charlie and Will were both counting down the weeks - they were less than a month from reuniting when the ship went down.

On Gulf Livestock 1, Will was responsible for 6000 cattle, and would regularly keep his family and Charlie updated on how the "ladies" were going.

"He'd update us about them as if they're people...he really cared about them," Charlie told Mamamia.

The ship had pretty ordinary WiFi, so Charlie was used to having patches - sometimes days - without contact and their last text messages bounced quite effortlessly between fun, affectionate thoughts like, "drinking my tea and thinking of how wonderful you are," to more concerning updates like "getting a little splishy splashy on here," or "We're headed through the heads in a north-east direction, and the storm is heading north-west. No way around this sucker!"

In one exchange, Charlie asked if he was worried, to which he replied: "hmm, should be interesting. Not all that worried to be honest, might get a bit hairy but should be fine."

In hindsight, Charlie thinks he wasn't telling her the whole truth so as to not worry her.

"I also imagine as a strategy, if he told us what he really thought would happen.... even if I tried to control myself and stay calm there would be emotional messages coming through his end and he needed to be as clear and calm as possible to get through what he was about to go through. I am actually glad that he didn't tell us more for his sake," she said. 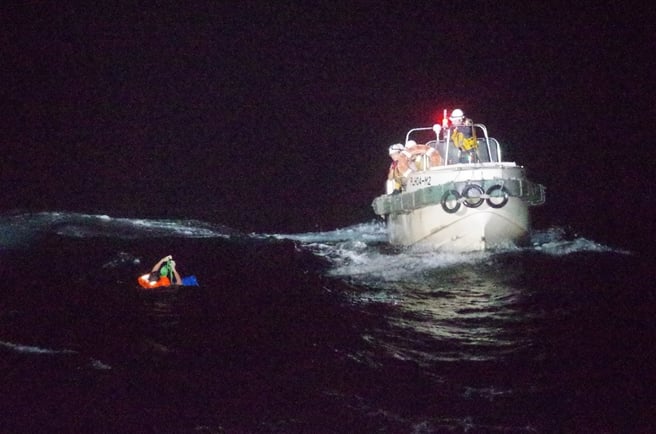 Sareno Edvarodo, a 45-year-old chief officer (pictured) from the Philippines is one of two people rescued from Gulf Livestock 1. 40 remain missing, and one person has been confirmed dead. Image: Japan Coast Guard /Getty.

Right now Charlie is in hotel quarantine in Sydney, arriving in Australia for the very first time without her Australian boyfriend. She is longing for a hug, but is trying to push away the feelings of isolation as she focuses on the job at hand: Finding Will.

Over the past 14 days she has fallen even more in love with her boyfriend, as she has been enveloped by the love and support of his extensive network of family and friends.

"I already loved him quite a lot, but it has deepened it...enriched it. There's so many people who love him, and it's allowing me to get to know him in such a beautiful way."

Alone in her single hotel room, Charlie has been riding the waves of the emotions and the waves of difficulty, telling Mamamia, "I have never felt like this in my life. It feels like an alternate reality....the kind no one can understand unless they've had someone go missing because you don't know where to place your thoughts. You can anchor to something, and then that seems to shift pretty quickly." 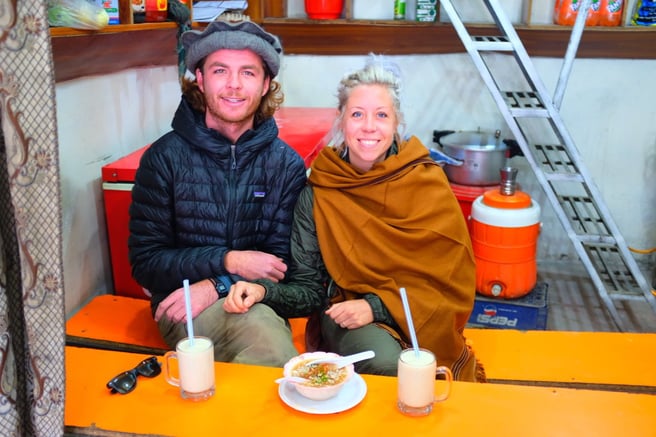 Charlie is currently in Sydney's hotel quarantine, and will finally meet Will's family on the northern beaches once released. Image: Supplied.

But she's staying strong because she has work to do raising awareness and continuing the desperate push for a resumed search, drawing strength from Will "even though we can't speak right now."

"His love is coming back to him in full force, there's so many people supporting him 24/7. We are staying strong, and holding to hope," Charlie told Mamamia.

You can sign the petition calling for the search in the East China Sea to resume, here.

If you would like to donate to the families of the missing men, who are raising money to bring them home themselves, you can find their GoFundMe here.