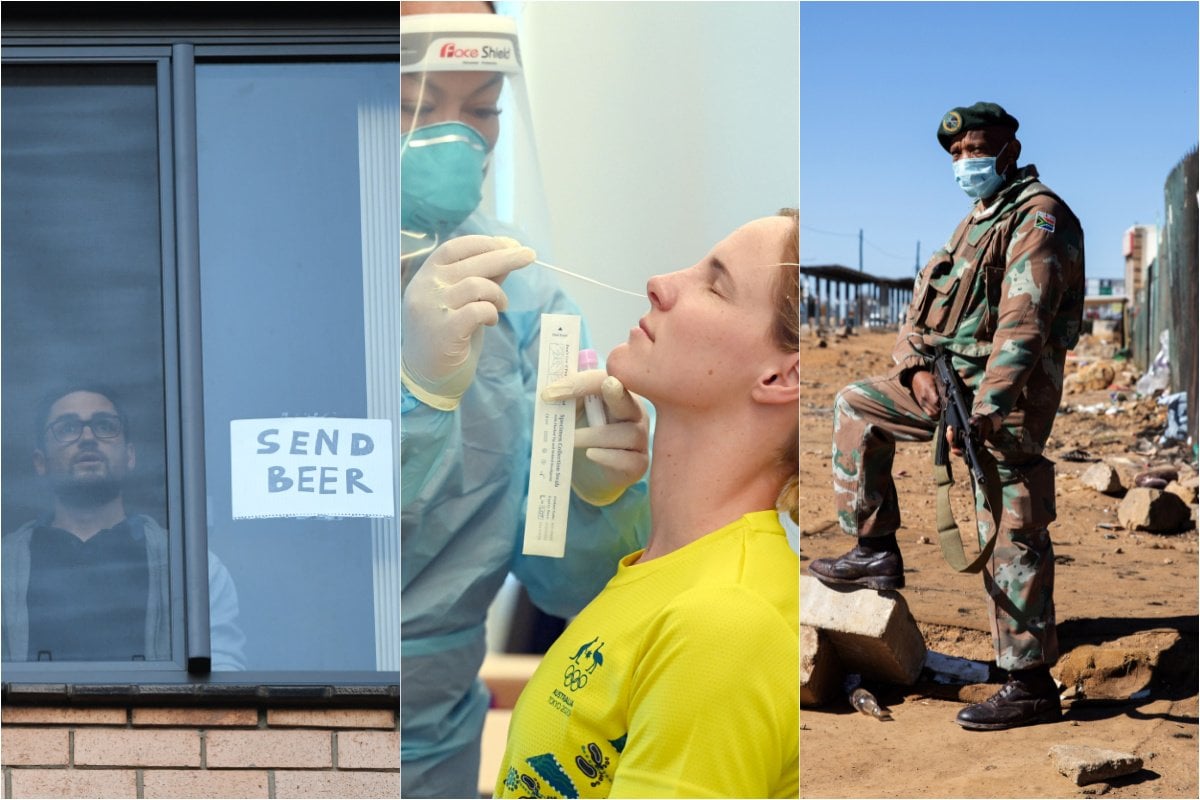 Five million NSW residents will suffer through at least another fortnight of lockdown after sustained high daily coronavirus numbers forced the state government to extend the measure.

NSW recorded 97 new local COVID-19 cases in the 24 hours to 8pm on Tuesday, with at least 31 of them circulating in the community during part of all of their infectious period.

The stay-at-home provisions for Greater Sydney were scheduled to end on Friday, after three weeks of lockdown, but will now remain in place until at least July 30.

Dozens of staff from Liverpool hospital are self isolating after a pregnant patient tested positive on Wednesday.

It comes after the state and federal governments on Tuesday revealed an extensive financial support package for workers and businesses.

"We want to see this lockdown end in a timely way but no matter how long we need, we will have that support for businesses and individuals," NSW Premier Gladys Berejiklian told reporters.

"The financial support measures in place are to prevent people from leaving home but we know that there is (still) essential work carried out."

The package also included more than $17.5 million for key organisations that support the mental health of Australians, including Lifeline, the Kids Helpline, Headspace and beyondblue.

With outbreaks across Australia already prompting a 25 per cent increase to Lifeline's helpline, chairman John Brogden says the money will help the service accommodate the surge.

"I cried for a million tiny reasons, none big enough to warrant tears on their own. Tens of millions of tiny reasons all across Sydney." https://t.co/54CzTEEidT

Meanwhile, thousands of essential workers in the Sydney's southwest are struggling to get mandatory COVID-19 tests, with some waiting up to six hours.

It came after the state government announced new restrictions for essential workers who must now get tested every three days if they work outside the area.

NSW Health has responded by expanding the number of 24/7 testing sites across the Fairfield LGA and extending hours at other sites.

Indoor masks back in Vic as virus spreads.

Masks are again compulsory indoors in Victoria, as the state's number of new COVID-19 infections continues to grow.

From Thursday, anyone aged over 12 will be required to wear a mask in all indoor settings, including schools and workplaces, unless an exception applies.

Victoria reintroduces masks in all workplaces and outdoors as COVID cases rise https://t.co/XVWTVy3aYg

AAP understands discussions are also underway to reimpose other restrictions such as caps on crowd limits and visitors permitted in homes, though a decision is yet to be made.

It comes as 11 new cases of COVID-19 emerged in Melbourne's north and west on Wednesday from two separate outbreaks, both of which stem from NSW.

Ten of the cases will be included in Thursday's daily figures.

A teacher from Bacchus Marsh primary school is among the new cases, having reportedly attended an AFL match between Carlton and Geelong at the MCG on Saturday with an infected friend who lives at the locked-down Ariele Apartments in Maribyrnong.

South Australians have been put on notice to follow COVID-19 rules and regulations or face tougher restrictions in response to a potential local outbreak of the virus.

Police Commissioner Grant Stevens says a meeting on Thursday will consider the current situation in SA after three exposure sites were identified linked to infected removalists who came into the state from Sydney.

In response to the NSW outbreak leaking into Victoria, SA has imposed new restrictions on arrivals from Victoria from midnight on Wednesday including mandatory testing within 24 hours.

All freight drivers crossing into the state must also show proof of a negative coronavirus test undertaken less than 48 hours earlier or alternatively get tested within 24 hours.

In addition, the state has tightened the rules for people returning from Sydney, requiring everyone to apply for a special exemption.

So far three sites at Tailem Bend, east of Adelaide, have been confirmed as potential exposure sites with the removalists stopping there on the return journey.

Many older Australians are waiting for an alternative to AstraZeneca before getting a COVID-19 vaccine, according to a government survey.

The Australian Bureau of Statistics reported 35 per cent of 50 to 69 year olds and 26 per cent of people aged 70 and over cited wanting a different vaccine as a key reason for not yet getting a jab, despite being eligible.

The figures come as Prime Minister Scott Morrison points to medical advice as a key reason for the slower than expected vaccine take-up.

In April, the independent federal advisory committee recommended the Pfizer vaccine for people aged under 50, due to the risk of rare but potentially deadly blood clots linked to the AstraZeneca jab.

In June, this recommendation was broadened to anyone aged under 60.

The Australian Technical Advisory Group on Immunisation updated its advice again this week in response to the Sydney outbreak.

People living in outbreak areas have been advised to cut the gap between their first and second doses of AstraZeneca.

The recommended wait time between doses has been slashed from 12 weeks to between four and eight.

Mr Morrison has criticised the series of cautious decisions by ATAGI.

"It slowed it considerably and it put us behind," he told 2GB.

So far, just under 9.5 million vaccine doses have been administered.

The family of an Indigenous man who died alone in a Sydney jail is demanding answers and a coronial inquest into the fatality.

Frank 'Gud' Coleman, a 43-year-old Ngemba man, was found on Thursday in his cell at Long Bay jail.

Coleman, who was born in Brewarrina in northwest NSW and raised in Mount Druitt in western Sydney, is the ninth Indigenous person to die in an Australian prison since March.

At least 478 Indigenous people have died in custody since the 1991 Royal Commission into Aboriginal Deaths in Custody.

Coleman's family and the Aboriginal Legal Service are demanding answers after learning he was found unresponsive.

His former partner Skye Hipwell, who is the mother of three of his children, said he was healthy and his death had come as a "complete shock".

A woman accused of sparking a national food safety panic when needles were found inside strawberries has had all charges against her dropped.

However, the start of the Brisbane District Court trial was delayed after two days of legal argument and Ms Trinh was told on Wednesday that prosecutors had dropped all charges.

BREAKING Charges against a Qld farm supervisor who was accused of putting needles in strawberries in 2018 have been DROPPED. My Ut Trinh was charged with 8 food contamination offences but was told today the prosecution would “no longer proceed against you” @abcbrisbane @ABCRural pic.twitter.com/kbrqrTsy5H

"The prosecution have indicated that they will no longer proceed against you with these charges," Justice Michael Byrne said.

"You are now discharged and you can leave the dock."

Outside court Ms Trinh and supporters embraced and wiped away tears.

"Thank you. I don't know how to talk. I no talk but I work my job nearly 20 years, I eat fruit every day," she told AAP.

"I no work for almost three years."

Supporters said Ms Trinh had been separated from the world for three years since being charged.

Mr Dore said dropping the charges was "the right decision" considering the evidence that was produced throughout the course of a "long and convoluted" prosecution.

In a statement, the Crown admitted it had little hope of securing a conviction against Ms Trinh.

Ms Trinh had worked at Berrylicious in her hometown of Caboolture, north of Brisbane, between September 2 and 7, 2018, when prosecutors previously alleged she inserted needles into the fruit.

Growers were forced to destroy entire crops with financial losses estimated at about $160 million.

Western Australia is set to lock out people from NSW for at least another two months as Sydney deals with a worsening coronavirus outbreak, while Victorians must now quarantine for 14 days upon arrival.

Effective immediately, travellers who have been in Victoria must self-quarantine for 14 days upon arrival at a suitable premise. The order was made while some travellers were in the sky forcing them straight into quarantine once they hit the tarmac.

They must also present for a COVID-19 test within 48 hours and again on day 11.

Travellers from Victoria into WA are landing on the tarmac and heading straight into quarantine as the state announces tough new border rules. #9Today pic.twitter.com/q5jg4BWIAi

"We have to assume that this is the more contagious Delta variant which requires our immediate action," WA Police chief Chris Dawson told reporters on Wednesday.

"The list of exposures sites in Victoria is growing and so is our concern and the risk to Western Australians."

WA this week further tightened exemptions for travellers from NSW, including those granted on compassionate grounds.

"WA residents wanting to enter from NSW are not guaranteed right of entry, and need to demonstrate extenuating circumstances to be granted approval to enter WA," the latest travel advice said.

Olympic champions at the Tokyo Games can forget about having their medals hung around their necks as they stand on the podium, shaking hands with dignitaries and soaking up their success.

Instead, the three medals will be presented on a tray to the athletes on the podium and they then have to hang them around their own neck in front of the empty stands.

There will also be no handshakes or hugs.

"The medals will not given around the neck," International Olympic Committee President Thomas Bach told a virtual media roundtable on Wednesday.

Olympic winners will have to put medals around their OWN necks due to Covid https://t.co/0MbwazgORu

"They will be presented to the athlete on a tray and the athlete will take the medal him or herself.

"It will be made sure the person who will put the medal on the tray will do it with disinfected gloves. Presenters and athletes will wear a mask. There will be no handshakes and no hugs during the ceremony."

Crowds have looted shops and offices in South Africa, defying government calls to end a week of violence that has killed more than 72 people and wrecked hundreds of businesses.

The unrest, the worst in South Africa for years, has also disrupted hospitals struggling to cope with a third wave of COVID-19 and forced the closure of a refinery.

JUST IN - At least 72 people have been killed, hundreds arrested, and countless properties looted so far in spiraling unrest in South Africa triggered by the jailing of former president Jacob Zuma.pic.twitter.com/9HNgZBotCz

Protests triggered by the jailing of ex-president Jacob Zuma for failing to appear at a corruption inquiry last week have widened into looting and an outpouring of general anger over the hardship and inequality that persist 27 years after the end of apartheid.

Shopping malls and warehouses have been ransacked or set ablaze in several cities, mostly in Zuma's home in KwaZulu-Natal province, and the financial and economic centre Johannesburg and surrounding Gauteng province..

- Prime Minister Scott Morrison says the Australian government is very wary of a Chinese surveillance ship making its way towards Queensland. It's expected to arrive on Friday.

- Britney Spears conservatorship case is returning to a Los Angeles courtroom this morning. She is seeking to hire her own lawyer.

Mr Morrison has criticised the series of cautious decisions by ATAGI. "It slowed it considerably and it put us behind," he told 2GB.