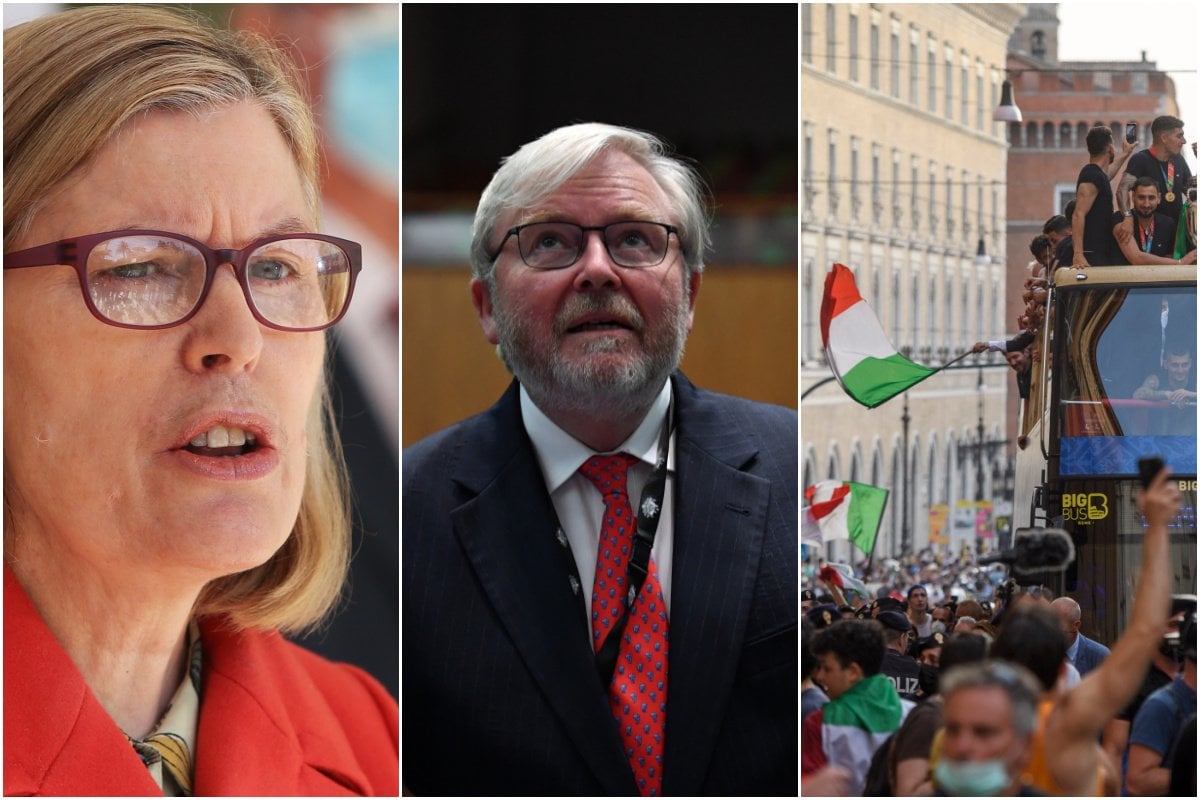 89 new cases and a second death confirmed for NSW.

A man in his 70s from Sydney's eastern suburbs has died with NSW Health recording 89 new cases in the 24 hours to 8pm Monday night.

The man is the second confirmed fatality from Sydney's current COVID outbreak, with only 55 of the new cases in isolation throughout the infectious period.

Premier Gladys Berejiklian has announced new rules, requiring people who live in the Fairfield LGA to have regular COVID-19 tests if they are required to leave the area for essential work. This also applies to people living in the lockdown region who are travelling to the regions.

"We are asking people who are working or moving between greater metropolitan Sydney and into the regions to get a weekly Covid test, even if they don’t have symptoms just to make sure that we reduce the incidence of essential workers passing on the virus," she explained.

Brad Hazzard says NSW Police can demand the result of a test if someone leaves Fairfield LGA, or anyone in Sydney leaves for the regions. @9NewsAUS

The new directions come after a construction worker tested positive to COVID-19 in Goulburn. Nine people have now been confirmed as testing positive in a lockdown down Bondi apartment block. But southwest Sydney remains the new epicentre of the current rise in new cases.

121 infringement notices have been handed out by NSW Police in the last 24 hours, 34 of which were in the city's west.

"This 34 represents, in my view, a considerably good effort by the people of south-west Sydney in identifying the fact that they are serious about the disease. They are serious about complying and I must say that New South Wales police force wants to extend a big thank you to the people of south-west Sydney in the way that they have got into the spirit of the order," Deputy Commissioner Gary Worboys said.

While a lockdown extension hasn't been confirmed as of yet, on Monday the Premier said, "where the numbers are, it is not likely - in fact, almost impossible - for us to get out of lockdown on Friday."

The state and federal governments, meanwhile, continue to nut out additional financial aid for businesses as the Greater Sydney lockdown drags on, although an announcement has not yet been made.

The state government has already committed $1.4 billion for businesses and is reportedly keen to establish an NSW-funded JobKeeper-style program. An announcement on the program is imminent, Ms Berejiklian said.

Victorian contact tracers are having trouble nailing down the movements of a Sydney-based removalist team, one of two new COVID-19 scares.

Two of the three-person crew have tested positive upon their return to Sydney after travelling through Victoria and SA for work last week.

Removalists are permitted to enter Victoria under the state's border permit system.

The workers made a drop-off to a family home in Craigieburn and a pick-up to another in Maribyrnong on Thursday. Both families of four are isolating and have been tested.

A Melbourne apartment complex is in lockdown, and six exposure sites have been identified overnight after the virus jumped the border. #9Today pic.twitter.com/ZkiyoxxnIx

The crew is believed to have immediately departed Melbourne and arrived in Adelaide in the early hours of Friday morning.

But Victoria's COVID Commander Jeroen Weimar said authorities still did not have a complete picture of their movements within the state.

On Monday evening, Maribyrnong's Ariele Apartments where the removalists stopped on Thursday were listed as varying levels of exposure sites for five days.

The Coles at Craigieburn Central along with the entire shopping centre and a Broadmeadows petrol station were also identified as exposure sites for specific times on Saturday and Sunday.

The removalists had already purportedly left the state by then, meaning the venues are likely linked to two new COVID-19 cases among a family from the City of Hume who recently returned from Sydney.

Those cases will be included in Tuesday's tally.

The pharmaceutical giant said it was inaccurate to suggest any individual or third party had any role in the contractual agreements.

"The only two parties involved in these agreements are Pfizer and the Australian government," a company spokeswoman told AAP on Monday.

"All agreements and supply arrangements including dose planning are exclusively made with the federal government, and details of the agreement and discussions are confidential.

"All discussions on supply and procurement with the federal government are led by Pfizer representatives in Australia."

Mr Rudd contacted Pfizer at the insistence of senior Australian business leaders based in the United States.

Thank you @MrKRudd for speaking to the Chairman of Pfizer to secure an earlier delivery of vaccines. Staggered the vaccination of Australians was apparently not important enough to warrant a call from @ScottMorrisonMP or @GregHuntMP to the Pfizer boss.

They were concerned Prime Minister Scott Morrison was not pushing hard enough and may have offended Pfizer by sending junior public servants into negotiations.

Mr Rudd met virtually with the global head of Pfizer on June 30 and asked whether the delivery of Australia's doses could be brought forward.

The pharmaceutical boss agreed to investigate what could be done.

Mr Rudd then wrote Mr Morrison a letter to brief him on the discussions, with a deal announced eight days later.

Pfizer has committed to delivering more doses to Australia sooner than expected, with one million doses to be rolled out each week from mid-July.

Defence Minister Peter Dutton ripped into Mr Rudd over his approach to Pfizer executives and the media reports that ensued.

"I suspect it wouldn't take our greatest detective within the Queensland Police Service to identify who leaked that self-serving letter," Mr Dutton told 4BC radio.

"Kevin claims credit for many things, it used to drive his Labor colleagues crazy."

In a statement, Rudd said his statement was consistent with Pfizer's stance.

Morrison may be garbage at vaccine policy but, wow, are his spin-doctors effective on Murdoch columnist @vanOnselenP. Bottom line: My comments are 100% consistent with Pfizer. Morrison should be red-faced for never calling Pfizer’s CEO; meanwhile, Israel’s PM had 17 calls. https://t.co/zhHMK7W0fg pic.twitter.com/FC3FcSirlv

The Queensland premier has told residents in NSW to return home while they still can, warning Sydney's coronavirus crisis could force her to close the border with little notice.

Annastacia Palaszczuk has opted to keep the border open - for now. But she's been direct with residents who are south of the border, saying she's dealing with a volatile situation that could see Queenslanders shut out if the virus spreads from Greater Sydney into regional NSW.

Four people have been fined and placed into hotel quarantine after arriving on the Gold Coast from Sydney on a superyacht to watch Australia play France in the rugby union.

They have all been fined $4003 and accused of providing false and misleading information upon arrival in Queensland.

Four people have been fined and placed into hotel quarantine after arriving on the Gold Coast from Sydney on a superyacht. #7NEWS https://t.co/afjamqZN4m

Meanwhile the Queensland premier has defended a deal that will allow the NRL to move 12 clubs to southeast Queensland for the next two months, so the competition can continue.

The agreement will allow players to bring their families with them, something Ms Palaszczuk said would not pose a risk because the clubs will have exclusive use of three hotels.

Damaging winds and rain are set to batter Perth and surrounding regions for a second straight day as a storm lingers in the state's south.

Gusts of more than 100km/h are possible on Tuesday, driven by a deep low pressure system which is slowly tracking east.

It comes after the storm flooded streets and left more than 1700 homes without power late on Monday afternoon.

An unusually prolonged period of squally weather will continue through much of southwest WA to Wed. A severe weather warning is current for places including Albany, Bunbury, Katanning, Mandurah, Manjimup, Margaret River, Mount Barker, Narrogin and Perth https://t.co/SjHDEFUgQP pic.twitter.com/hg8ARoslP9

"This event will continue throughout tomorrow with periods of strong winds and heavy rain."

Emergency services have received just over 100 calls and 59 requests for assistance since early on Monday, mostly for flooding and roof damage.

A home in the coastal town of Eagle Bay, 256km south of Perth, had its entire roof torn off by what locals described as a "tornado".

Perth has already recorded its wettest start to July since 1965.

UK Prime Minister Boris Johnson has urged people to show caution when nearly all remaining COVID-19 restrictions are lifted in England next week, saying an increase in cases underlined that the pandemic was by no means over.

England will from July 19 be the first part of the United Kingdom to lift the legal requirement to wear masks and for people to physically distance.

The government says the UK's vaccination drive - one of the world's fastest - has largely broken the link between infections and serious illness or death.

England is facing multiple “major risks” after pandemic restrictions are lifted next week: hospitals coming under intense pressure, a new vaccine-resistant variant emerging and as many as 200 Covid-19 deaths per day https://t.co/sxDfwUbaWR

But what was once billed as "freedom day" is now being treated with wariness by ministers after a new surge in cases and fears that there could be as many as 100,000 new infections a day over the northern hemisphere summer.

Johnson set a sombre tone, defending his decision to lift most of the remaining restrictions by saying the four conditions the government set itself had been met but also warning the country that more people would die from the coronavirus.

"We think now is the right moment to proceed... but it is absolutely vital that we proceed now with caution and I cannot say this powerfully or emphatically enough - this pandemic is not over," he told a press conference.

"To take these steps we must be cautious and must be vaccinated," he said, adding that England would register "more hospitalisations and more deaths from COVID".

Europe's new soccer champions were feted on their return home at the Italian presidential palace and then the premier's office, with Rome's streets lined by flag-waving and car-honking fans.

The first Italy team to win the European Championship in 53 years knew it was in for a hectic day when its chartered flight from London arrived at Rome's Leonardo da Vinci Airport at dawn on Monday and a banner on the tarmac read, "Grazie Azzurri."

It came to Rome 🏆

The Euro 2020 champs are celebrating with the streets of Italy 🎉 pic.twitter.com/erlIo5b5EF

Airport workers cheered as the team left the plane. Captain Giorgio Chiellini pumped his fist in the air, and coach Roberto Mancini hoisted the trophy high over their heads.

Italian President Sergio Mattarella had been at Wembley Stadium on Sunday night cheering with Azzurri fans as Italy won the Euro 2020 final following a 3-2 penalty shootout win over England.

Many Italians saw the European Championship as a relaunch for a country that spent much of the past 16 months in various stages of lockdown.

- A UK editorial in London's Financial Times has savaged Australia’s vaccine program, saying our COVID-19 response has seen us go from a "rooster to a feather duster".

- Coronavirus jabs will be mandatory for France's health workers. And anyone wanting to get into a cinema or board a train will need to show proof of vaccination or a negative COVID-19 test under new rules announced by President Emmanuel Macron.

- Tesla founder Elon Musk has taken to a witness stand to defend his company's 2016 acquisition of a troubled company called SolarCity, telling the court he does not enjoy being the electric vehicle company's chief executive.