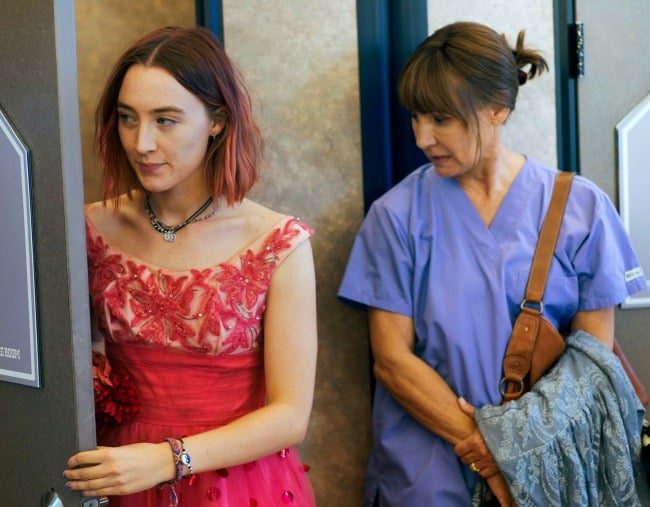 Thanks to our brand partner, Universal Pictures Australia

Every once in a while, maybe once in a generation, a special type of movie comes along.

A movie that is able to touch your soul and tickle your funny bone through a beautifully executed story filled with humour and heart and an honest, unflinching look at human relationships.

Lady Bird is one such film.

That sweet-sounding movie title should be very familiar to your ears, because since its overseas release Lady Bird has managed to hit that sweet spot of finding acclaim with both critics and fans alike. At the Golden Globes this year, the film won the award for Best Motion Picture, Musical or Comedy, and leading lady Saoirse Ronan walked away with the statue for Best Actress in a Musical or Comedy Motion Picture.

And if the new swag of shiny awards aren’t enough to get you excited about seeing this gorgeous film, you should also know that it has already struck such a chord with moviegoers. The film holds the record for the longest unspoiled streak of positive reviews on movie review website Rotten Tomatoes, beating out the previous record held by Toy Story 2.

Luckily for us, it will soon be showing across Australian cinema screens. It’s a film for women, by women – and tells a story we rarely get to see on screen.

Lady Bird is written, directed and conceived by the incredibly talented Greta Gerwig, who first made her mark in front of the camera by starring in films such as Arthur, Frances Ha and 20th Century Women. Now she has broadened her storytelling expertise to include penning scripts and directing movies, with Lady Bird being her solo directional debut.

Spanning 2002 and 2003, the film follows Lady Bird (spoiler alert, her real name is Christine and renaming herself is a way to both distance herself from and rebel against her parents) a high-school senior who dreams of escaping her dreary hometown of Sacramento to attend college in New York.

Anyone who was once upon a time a teenage girl can relate to the uncertainty, frustration, excitement and fear that inhabits Lady Bird's orbit as she navigates that tricky time between leaving girlhood behind forever and stepping into the sometimes crushing world of adulthood.

But the meatiest, juiciest plot points come from the relationship between Lady Bird and her mother, Marion (played by Roseanne's Laurie Metcalf).

Marion looks at her daughter the way only a mother can - she is fiercely protective and her love is palpable. And as any daughter knows, no-one else's words can cut you down quite like your mother's can.

The raw relationship between these two characters is sure to strike a chord with women everywhere. Together, they are the perfect example of everything that is beautiful and volatile in mother/daughter relationships: the emotion, humour, hate, love and that fierce protectiveness.

So much about this mother/daughter dynamic reminds me of my relationship with my own mother. Our relationship is one of contradicting emotions and more than a few hurt feelings on both sides following family tussles over the years.

And even now that my teenage years are behind us (thank goodness, I'm sure she would say) we still sometimes live in this strange limbo where we cannot always exist together but at the same time never live in a world where we were apart.

The fact that Christine renames herself in a bid to escape her mother's hold and forge her own path is one that is, shamefully, all too familiar to me.

When I was a little girl, I decided that I hated my name with the fire of a thousand suns and seriously began to question the decision making process my mother had undertaken before settling on the name "Laura".

It just seemed so very droll, so very common place and just so...lacking in glamour and adventure. Didn't the woman know how special and action-packed my life was going to be?

Throughout my school years, I switched between "Kelly", signed off schoolwork as "Audrey" and even wore a "Paige" name badge at my after-school retail job.

Everything from my name to what I thought I should be doing with my life was thrown out across the table when Mum and I would fight. I would declare that I was going to hightail it off to a big, fancy city to study acting so that my inevitable movie stardom could kick in and Mum would reasonably ask how I expected to pay for that.

One day, I really pushed it too far. She looked me straight in the eye and said "Fine. Don't call yourself that name ever again. Because I carefully picked out that name for the lovely daughter I would one day have and THAT'S NOT YOU."

The relationship between mothers and daughters is a rich and complex thread that until now has rarely been fully and accurately explored or celebrated. Until now. I think this is the first time I have truly looked at a pair of characters on screen and thought "I can see my life here."

Mothers and daughters don't always see eye-to-eye on everything, but this film will bring them together.

What's the best movie you've seen recently? Share with us below.

Saoirse Ronan is a marvellous actress - loved her in Brooklyn.

Seeing "Breathe" recently (based on a true story) was the first time I have truly looked at a pair of characters on screen and thought "I can see my life here"! I doubt many others can say that though, but we brought our baby home after many months in hospital and cared for him on respiratory support, among other things. It was a great film, well acted, uplifting and even funny.

Ahhh.... she also wrote "Frances Ha" and the other classic "Mistress America" so not exactly her first foray into writing... Very talented lady all around!