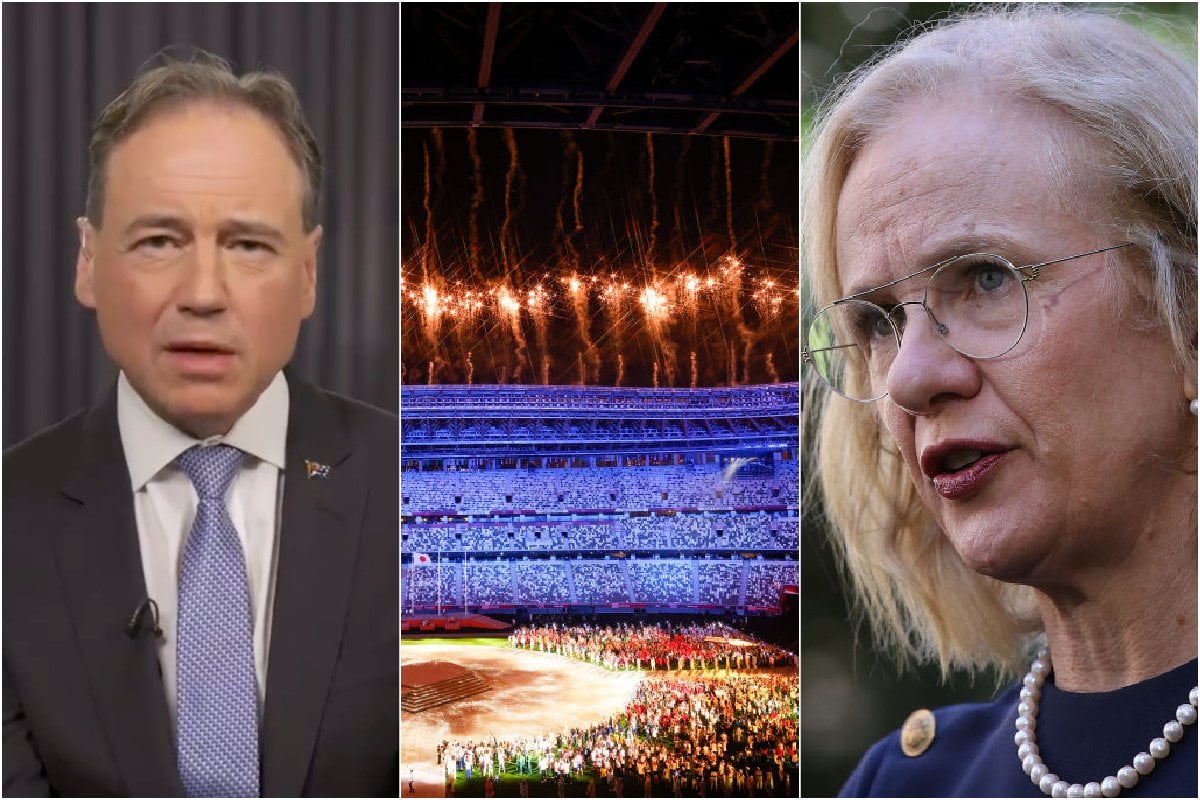 Children to start getting Pfizer jab, as authorities prepare for arrival of third vaccine option.

Young Australians can start getting the Pfizer jab from Monday, with Sydney looking no closer to ending weeks of COVID-19 lockdown and the number of deaths continuing to rise.

Children from 12 to 15 years of age with underlying medical conditions, and Indigenous and remote community children will have access to Pfizer, federal Health Minister Greg Hunt said.

Vaccines are likely to be approved and available for all children aged 12 and over from around October and jabs will be administered at schools and medical centres, federal Health Minister Greg Hunt says. https://t.co/9y6x09F2AF

Children more broadly in that age group, are being considered by the Australian Technical Advisory Group on Immunisation.

"All the advice is they are likely to open that up to kids and school-based vaccination programs are planned with every state or territory," he said.

Federal Health Minister Greg Hunt has promised millions of doses of another mRNA type of vaccine will be available in coming months, as hundreds of Sydneysiders continue to be infected by COVID-19 with a rising death toll.

The Moderna vaccine is about to be approved in Australia. Here's what we know https://t.co/UxUzwU8WvV

Mr Hunt expects the first million doses of the Moderna vaccine will arrive in Australia next month subject to final approval by the Therapeutic Goods Administration, due in the next two weeks.

Once approved, supplies are expected to ramp up to three million per month through October to December.

The ABC reports, the Moderna vaccine is expected to be rolled out nationwide, with the majority of doses to be used as booster shots for people who have received AstraZeneca or Pfizer.

It's arrival comes on top of the effective doubling of the Pfizer vaccines to two million per week, as well as the home manufactured AstraZeneca type.

This increased supply comes as vaccination rates have doubled from 700,000 per week a month-and-a-half ago to almost 1.3 million over the past seven days.

The TGA is also assessing a new antibody treatment, Sotrovimab, which is expected to be available for use later this year.

"This medicine is not for everybody," Chief Medical Officer Paul Kelly told reporters in Canberra.

There's also been a fall in confidence in his federal government's management of the pandemic as state governments try to stop the spread of COVID-19, according to the latest Newspoll published in Monday's The Australian.

For the first time, more people – 49 per cent of those surveyed – say they are unhappy with Mr Morrison's management of the pandemic.

People were even more unhappy with the prime minister's handling of the vaccine rollout with 59 per cent of respondents saying they were dissatisfied.

Popular support for the federal coalition and Labor remains neck and neck at 39 per cent since the last poll three weeks ago.

The two-party-preferred split of 53-47 per cent, in Labor's favour, also remains the same.

Domestic flights might be culled this summer unless industry saved.

Even if Australia gets through its series of lockdowns and there is a high level of vaccination, there is a warning hundreds of domestic airline flights could be grounded this summer.

That's because thousands of critical aviation ground operations workers are on the cusp of leaving the industry as they have been excluded from the Australian government's support package for the rest of the sector.

"Our 9,800 specialist ground handlers are being denied the same financial support from the government for doing the same work, at the same airport for the same airline as in-house employees," he said.

Most of them will receive just $44 a day from the JobSeeker dole payment. For some 260,000 young people and students, their payments are even less, at $36 per day.

A 21,000-seat stadium in Sydney will for the next seven days serve as a hub for Year 12 students from eight coronavirus-hit council areas in western and southwestern Sydney to get jabbed.

But regardless of their vaccination status, the students have not been cleared to return to the classroom on August 16.

Qudos Bank Arena in Sydney Olympic Park will from Monday be the venue for the 24,000 Year 12 students to get their first Pfizer shot.

A new vaccine hub for Year 12 students is preparing to open its doors in just a few hours. #9Newshttps://t.co/4oWMDQ7isa

These students include those who study or reside in the Liverpool, Cumberland, Fairfield, Canterbury-Bankstown, Parramatta, Blacktown, Georges River and Campbelltown council areas.

The arena will cater solely for the Year 12 students this week before becoming a mass AstraZeneca hub for adults from next week.

NSW Health said over the weekend that eligible students would receive an online link to make their vaccine reservation.

NSW recorded 262 new local COVID-19 cases in the 24 hours to 8pm on Saturday, at least 72 of which were in the community while infectious.

The outbreak has killed at least 28 people to date.

Premier Gladys Berejiklian on Sunday reiterated vaccination was the primary means by which to bring the pandemic to an end. While NSW could not consider returning to pre-pandemic freedoms until it reached 70 per cent vaccination coverage, Ms Berejiklian said some restrictions could be eased with a 50 per cent rate.

Her government hopes to hit six million jabs by month's end, which would require administering an average of 65,000 jabs each day.

Almost 46 per cent of eligible NSW residents have received one shot.

One Qld lockdown lifts as another begins.

Queensland authorities are trying to squash three separate outbreaks of COVID-19 as Cairns enters its first day of a three-day lockdown.

The state recorded nine new cases on Sunday including an unvaccinated taxi driver who was infectious in the Cairns community for 10 days.

Queensland Chief Health Officer Jeannette Young said she hoped three days in lockdown for Cairns and Yarrabah would be enough to evaluate the risk of infections spreading.

Cairns has been plunged into lockdown after a COVID-infected taxi driver worked in the community for ten days while infectious. #9Today pic.twitter.com/40UAJaG1Rm

Meanwhile, eleven local government areas in the state's southeast emerged from an eight-day lockdown on Sunday.

Residents are still subject to a number of restrictions until at least August 22 including mandatory mask-wearing, a limit of ten visitors to a home and a one person per four square metre rule. Up to ten visitors can now gather in public spaces.

Weddings and funerals will be limited to 20 guests and no community sport will be allowed for the next two weeks.

Melburnians will be the first Australians able to receive a COVID-19 vaccine while behind the wheel of their car, with a drive-through clinic set to open at a former Bunnings Warehouse.

Motorists and passengers will be screened for eligibility and symptoms at the entry to the car park of the Melton site before proceeding in batches of 10 cars to an identification check-in point.

They'll then park and receive their jabs and will be asked to remain under observation in the vehicle until given the all clear.

The facility is initially expected to administer 10,000 vaccine doses a week, with hopes it will be the first in a series of drive-through hubs.

Announcing that Victoria had added 11 locally-acquired infections to its caseload on Sunday, Premier Daniel Andrews also said residents under 40 would be offered AstraZeneca jabs at nine of 50 state-run clinics.

Midway through the 14th of 17 days in Tokyo, Australia surpassed its Sydney 2000 haul and drew level with its all-time benchmark of 17 golds at Athens 2004.

Australia ranked sixth on the medal table, with a teary chef de mission Ian Chesterman applauding his team for feeling "comfortable being in the uncomfortable" amid disruptions and doubt that cloaked the first-ever delayed Olympics.

Chesterman delighted in other statistics - 46 medals from 15 sports, 59 per cent of medallists on Olympic debut, and 118 Australians finishing fourth or fifth across individual and team events.

The Australian Olympic Committee wanted all Australian athletes to be out of Tokyo within 24 to 48 hours of their final event, meaning a host of Aussies missed out on the grand finale. They instead watched the celebrations from isolation in quarantine rooms on home soil. 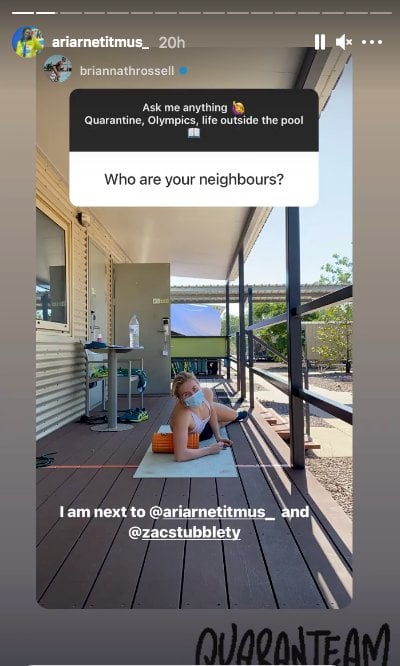 Most of our athletes watched the closing ceremony from quarantine. Image: Instagram.
ADVERTISEMENT

- Days after being charged with concealing child sex offences, the founder of Hillsong Brian Houston has delivered the Sunday sermon in the US state of Missouri.

- A new report by Greenpeace has found Australia is shirking its responsibility to stop rising sea levels from swallowing multiple Pacific Island nations, with the world on track for up to 3.9 degrees of heating.