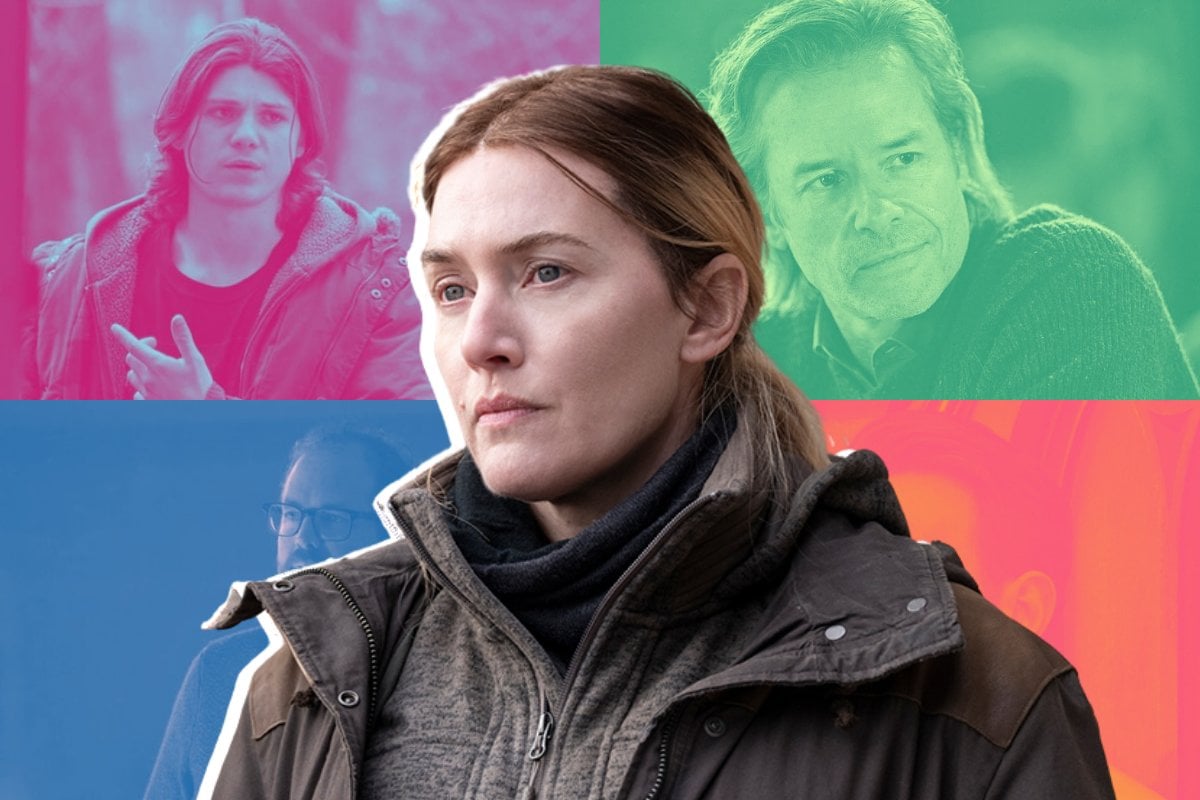 Content warning: This post contains many spoilers for the first season of Mare of Easttown. Read on at your own risk.

When Mare of Easttown dropped on Binge a month ago a lot of people quickly wrote it off as just another dead girl murder mystery.

But four episodes in, it's become one of the most talked about TV series of 2021 so far.

The series follows the story of Mare Sheehan (Kate Winslet) a police detective who is struggling to solve the disappearance of a local girl named Katie Bailey (Caitlin Houlahan). Katie also happens to be the daughter of Dawn, Mare's former friend and high school basketball teammate.

Mare's personal life is crumbling around her when another local girl, a teen mum named Erin McMenamin (Cailee Spaeny), is found murdered on the edge of town.

There's several reasons Mare of Easttown has been such a standout hit. First of all, the star power. The cast includes a greasy pony-tailed-Winslet as Mare, a strangely attractive drunken slurring Evan Peters as her police partner Detective Zabel, and Guy Pearce as her mysterious silver fox love interest.

Then there's the loveable and relatable family dynamics. Mare's mum is living with her to help her take care of her grandson, but she's also going to Mare's ex husband's engagement party next door.

But most of all, we've kept coming back each week because the mystery is so good. There's so many potential dirtbags in Easttown who could be the killer. Plus, there's the mystery of what's happening with the other two missing girls, and how all of this might or might not connect back to Mare's son's suicide.

The internet is rife with theories. So we've rounded them up for you here:

It was the dodgy priest.

We learn in episode three the last person Erin called the night she was murdered was Deacon Mark Burton (James McArdle). The deacon is a quiet, unassuming, upstanding member of his community who could 100 per cent be a murdering pedophile. It's just his... essence, if you know what I mean.

Detective Zabel then learns that Burton was moved on from his last parish because he was accused of sexual misconduct by the parents of a 14-year-old girl.

Look, he seems super suss, but I have a feeling he is a big ole' red herring.

It was the other dodgy priest.

Continuing on with this bleak pedophile theme, Mare's cousin Father Dan Hastings (Neal Huff) is also on the suspect list.

We learn in the first few episodes that Mare's son Kevin died by suicide and that he was a drug addict. He also had tics which developed when he was just a young boy.

His son, Drew, is now also developing the same tics.

There's a theory that Father Hastings molested his nephew when he was a boy and that led to him developing the tics and his eventual drug addiction and suicide.

And now he is molesting his great nephew, who has started developing the same tics.

According to the theory, Kevin told Erin about this before his death, and then Erin went to Father Hastings and attempted to blackmail him for the money she needed for her son's ear surgery.

And he killed her.

DJ's real father is the killer.

We learnt in episode three and four that Erin's ex-boyfriend Dylan is not actually the father of their son, DJ.

For a short moment there, we thought Mare's ex Frank Sheehan could have been the father because he once bought Erin a bunch of stuff for the baby and there were rumours going around town that something happened between them.

But a DNA test in episode four ruled him out.

Mare's deceased son Kevin could be the baby daddy. That would explain Mare's interest in a necklace she found in Erin's bedroom which had a date on it - maybe the day of Kevin's death?

But he couldn't be the killer. He was already dead.

Other clues lead us to the theory that Erin was being abused and groomed by an older man. Maybe one of the two religious fellas above or one of the married men in the community - like Lori's husband.

Why the f**k is Richard even in town?

Guy Pearce's character Richard seems a lil too... educated and elitist to be living in Easttown. He also seems super invested in getting to know Mare.

There's a theory that he's moved to Easttown to do research for his new book and that maybe the main character is going to be based on Mare. Perhaps he saw footage of Mare on TV around the time of Katie's disappearance and thought the disappearance of a local girl and the female detective trying to solve the case would make a good story.

There's also the theory that Richard is the killer. After all, he'd just moved to town when it happened.

Or maybe he is the shadowy figure who is keeping Katie and the other local girl captive?

Jess knows a lot more than she's letting on.

Erin's best friend Jess was very quick to throw Frank under the murder bus. She also admitted to setting up Erin's escort profile.

There's two blokes who have been in the series the whole time but are yet to be... suspects.

They then meet Mare at Erin's dad Kenny's place to break the news to him the next morning and many fans have noted that their body language seems off.

And they're just... flying under the radar at this point.

Siobhan seems too good to be true.

She gets along well with everyone in her family. She doesn't seem f**ked up about her parents' divorce. She helps her parents raise her dead brother's kid.

She was the only person to check whether Erin was ok after she was bashed in the woods.

But the next day, she doesn't bother to tell her mother - the lead detective - that she saw Erin on the night she died.

WHAT ARE YOU HIDING, SIOBHAN?

At the start of the very first episode, Mare went to Betty Carroll's house after Betty called her to say there was a peeping tom outside of her house.

Betty said the peeping tom "looked like a ferret" and we all laughed.

BUT MAYBE THE FERRET DID IT?

You can watch the first four episodes of Mare of Easttown on Binge now.