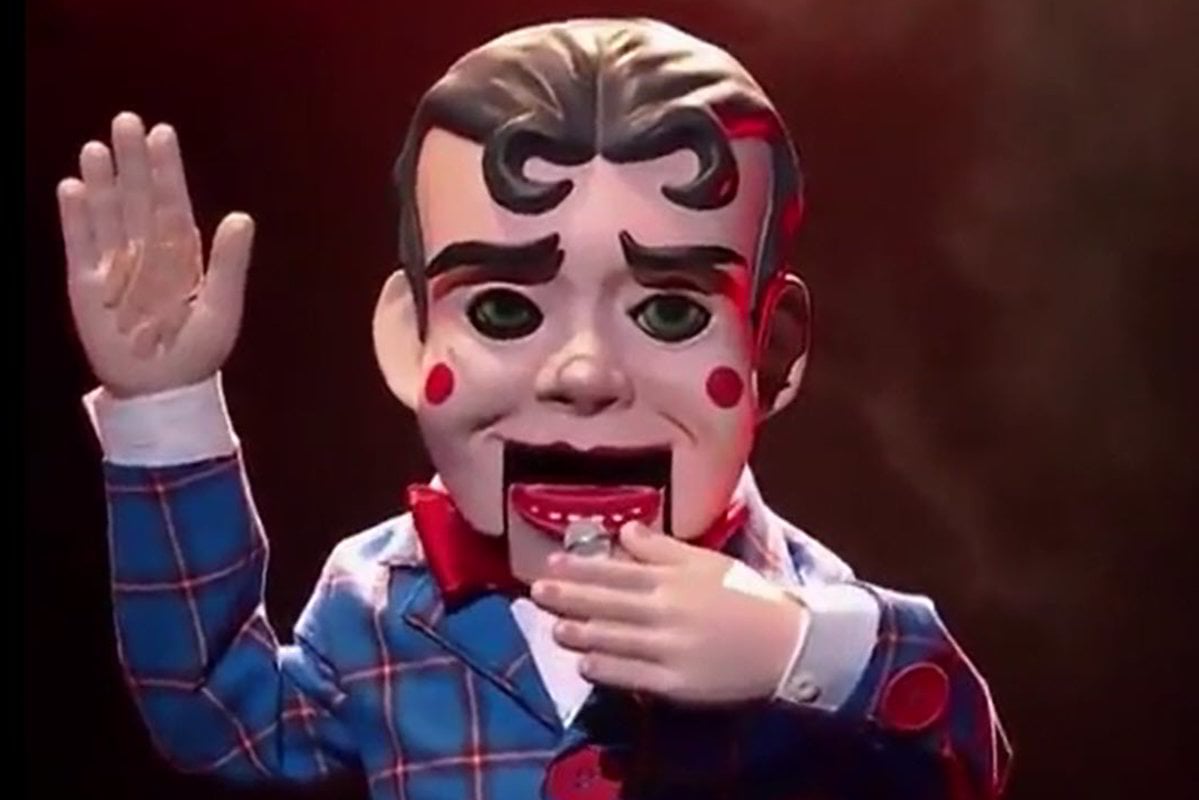 To catch up on all The Masked Singer Australia 2020 clues and gossip, visit our Masked Singer hub page. We’ve got you completely covered.

Get out your Wiggle fingers, because Osher has taken a much-loved children's performer and put him into a costume likely to cause psychological harm to not just children, but also Dannii Minogue.

Because Puppet, undoubtedly the most terrifying of this year's The Masked Singer costumes, is definitely a Wiggle.

If you've ever wondered what a Wiggle would sound like singing a Justin Bieber song, you're in luck. Post continues below video.

Our proof? Well, ask anyone who has spent five minutes with a toddler if they recognise the voice coming out of the puppet's scarily large head.

Because they will, and that voice 100 per cent belongs to Simon Pryce, the red Wiggle.

But hey, if Simon and Puppet having the exact same voice still isn't enough to convince you, we've poured over Puppet's clue packages for all the hidden messages.

Firstly, we'd like to draw your attention to Puppet's lovely red flower on his chest. Subtle, yet also so obvious. 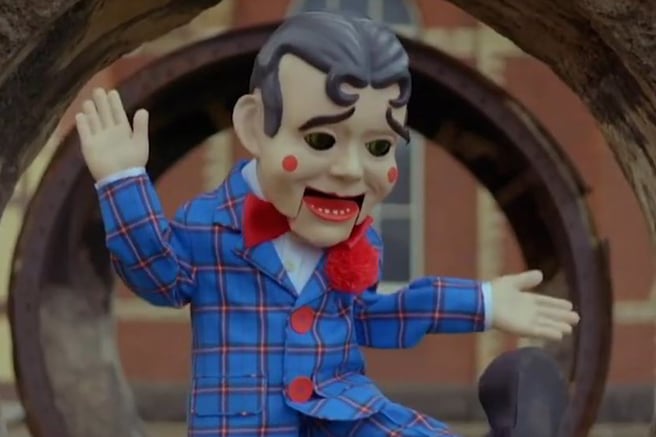 There's been other Wiggles' colours referenced, most notably with these drums: 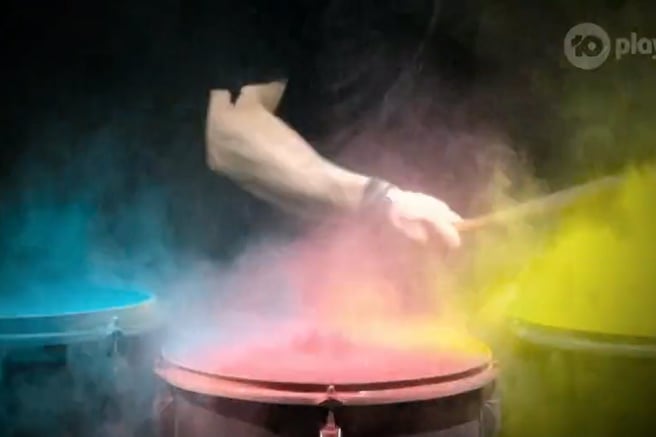 I know it's weird to think The Wiggles had a life before... being The Wiggles, especially if all you've heard playing from your television is Toot Toot, Chugga Chugga, Big Red Car for what feels like an eternity, but they did.

Simon took over from OG-Red Wiggle Murray in 2013, and before that had a fairly successful career in theatre and musicals that have been hinted at throughout Puppet's clues.

If you recall week one, there was also graffiti behind Puppet that references this too: 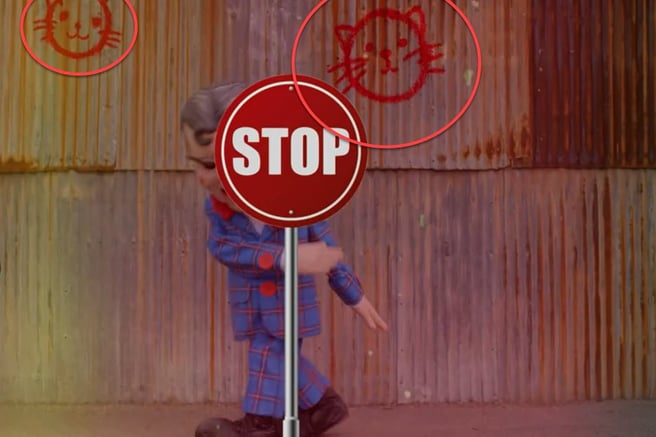 In week five, Puppet tagged the name 'James Michener' on a wall. Michener is an American author whose work was adopted into hit Broadway musical South Pacific, which Simon starred in.

One of Puppet's original clues was "I've had my brush with royalty and a long time in a court of law". The brush with loyalty has to refer to his role as King John in The Kingdom of Paramithi, a children's TV series created by The Wiggles' team.

As a Wiggle, Simon plays Gino the Genie, which covers "there has been magic in what I do, although granting wishes isn't my usual job", AND Talking Cow, referenced in the clue "I could do it until the cows come home".

In week three, Puppet said "wake up". No, he's not a conspiracy theorist. He's a Wiggle. Say it together now: WAKE UP, JEFF. Okay, so Wake Up Jeff is now just Wake Up!, on account of Jeff no longer being a Wiggle, but the clue still stands.

Perhaps the most obvious clue to date was Puppet's physical clue; lederhosen, which Simon wore as the red Wiggle in 'Cold Water Blues'. 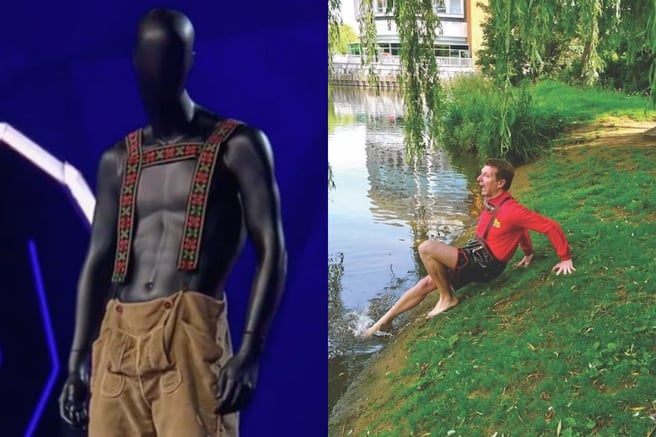 One of Puppet's weirdest clues cites the year 1964 as important.

Bare with us, because this is a bit convoluted: Original Wiggles Anthony Field and Jeff Fatt were in a band called The Cockroaches with Anthony's brothers Paul and John before founding the children's group. Paul and John released an album called 1964 in 2011, the same year Simon joined The Wiggles' regular tour group.

In episode five, Puppet said he has a "deep love" for what he does. Simon met his partner Lauren Hannaford when she toured with The Wiggles. 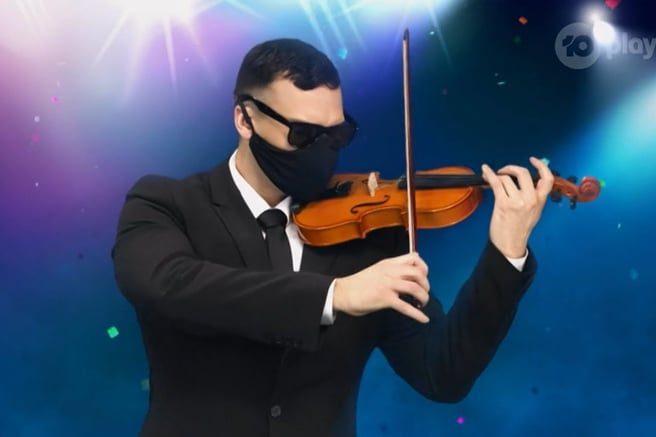 This also ties into the violin reference: Googling his name alongside 'violin' comes up with an article about their proposal story: Simon proposed at an orchestra performance in Paris and when the lead violinist from the orchestra noticed, he approached them and showered them with gifts.

Puppet has spoken about working out, and in a scene from week three he was working out in a step class. Simon is known for being really into his health and fitness - he regularly posts about it on his social media, and even appeared on Australian Ninja Warrior season two.

Extra long morning workout session after @lozhannaford and I started baking over the long weekend. 🍰🧁🥧🥮🎂🍪 Unfortunately it turned out really well so now we will be tempted to do it all the time. 😏 #baking #longweekend #workout #fhitbylh #fitness

Also, minor detail: Simon usually geotags his exercise posts with 'Sydney, Australia' on Instagram, but he's stopped doing that on posts throughout August. Maybe because he's in Melbourne, secretly. Hmm.