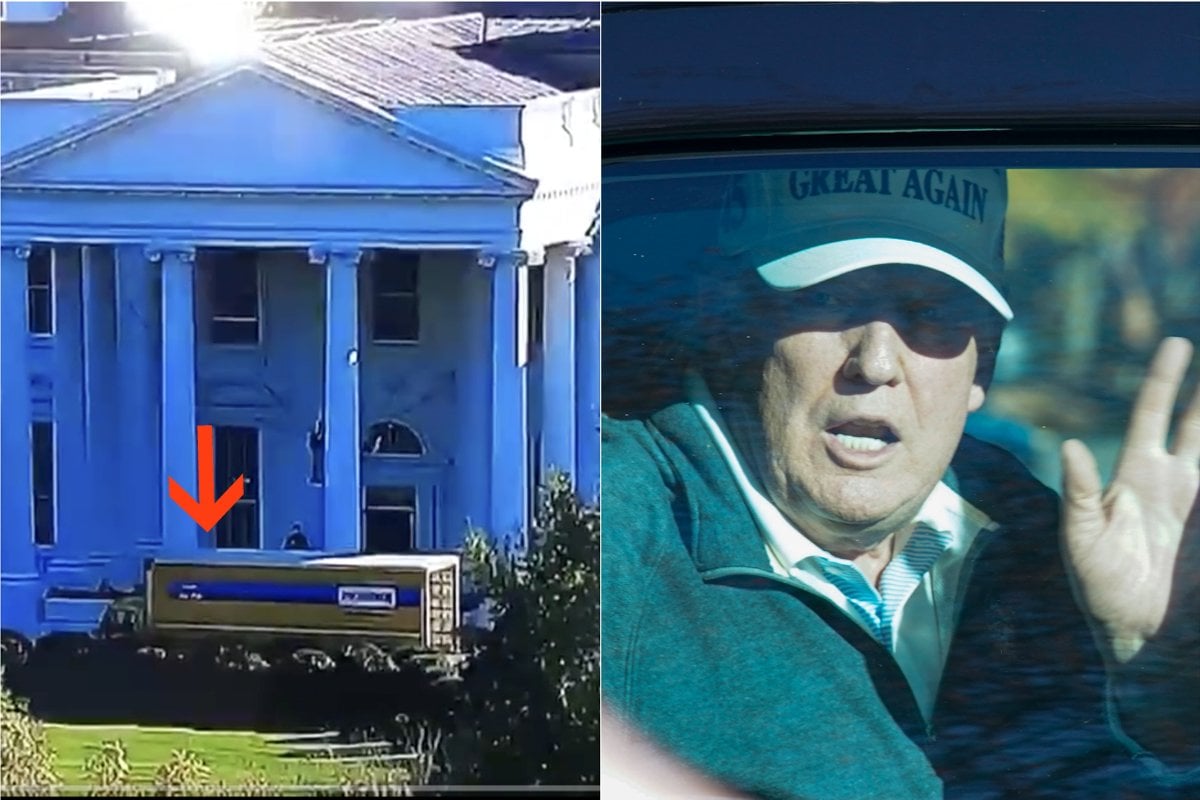 On Saturday, local time, crowds danced outside the White House in celebration of President-elect Joe Biden's victory in the US election. Inside the "People's House", though, was a president who refuses to concede and remains in denial that he could have lost the presidency.

So what is actually happening inside the White House?

Since the election, President Donald Trump has launched a chaotic and tumultuous campaign to falsely insist he won the election. The 74-year-old is currently in the process of launching a number of legal battles across US states - some of which he has already lost.

Here's everything we know about what's going on inside the White House right now.

On Saturday, just before news organisations announced Joe Biden as the winner of the US Election, the president played golf at the Trump National Golf Club in suburban Virginia.

According to sources who spoke with The New York Times, President Trump was "surprisingly calm, given the news he had received when he arrived at the club". 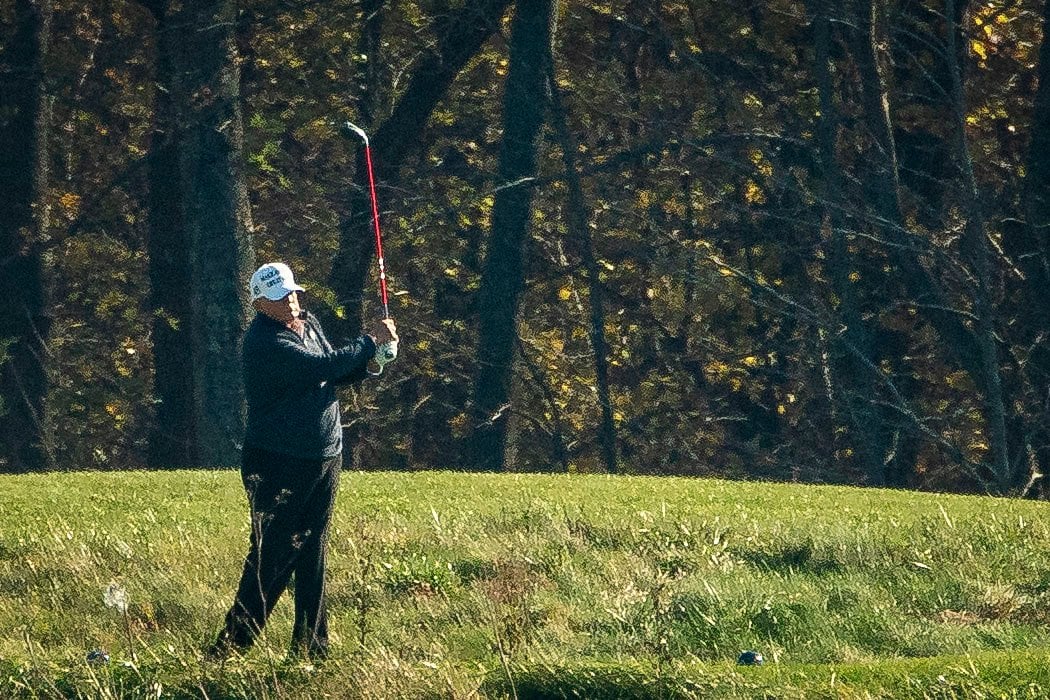 Donald Trump played golf as the result of the US election was announced. Image: Getty.

He returned to the White House on Saturday afternoon, where jubilant crowds were celebrating his loss on the Washington streets. Many waved Biden-Harris flags, whilst others held up "BYE DON" and "GOOD RIDDANCE" signs.

Photos show the President looking glum in the motorcade, as he peered out the window to the crowds gathered outside. 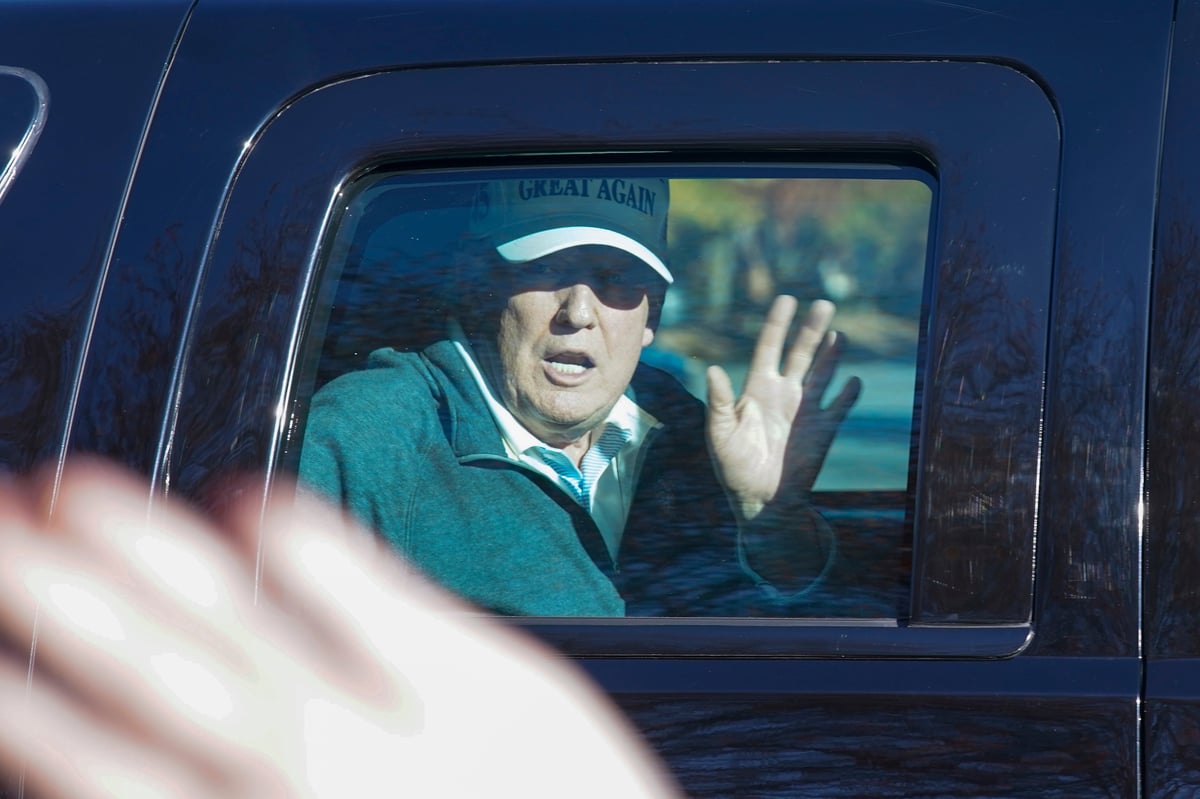 When Trump returned to the White House, he furiously tweeted that he had won the election in a manner that suggested he was, well, not calm. (More on his tweets in a moment.)

On Sunday, the President again returned to the golf course.

Donald Trump's favourite method of communication with his loyal followers is Twitter. Since election day, he has used the platform in his typically chaotic fashion by pedalling falsehoods and condemning media outlets.

"I WON THIS ELECTION, BY A LOT!" he tweeted upon his return to the White House on Saturday, at which point Joe Biden had been declared the winner of the election.

"THE OBSERVERS WERE NOT ALLOWED INTO THE COUNTING ROOMS," he subsequently tweeted, without providing any evidence of his claims.

The Trump campaign has launched legal proceedings in key battleground states of Pennsylvania, Georgia, Michigan and Nevada, where they have alleged that illegal ballots have been counted and claim campaign observers have not been able to gain genuine access to poll counting.

So far, they have lost two legal suits in Michigan and Georgia due to a lack of evidence. They had a small win in Philadelphia, with a judge confirming that campaign observers should gain better access to election workers processing voter ballots.

At the moment, Republicans are trying to raise at least $60 million to fund legal challenges in several states, alleging foul play and seeking donations, sources told Reuters. However, the fine print on email says that more than half of the money raised would go to paying down the campaign's debts.

On Saturday morning, President Trump tweeted: "Lawyers News Conference Four Seasons, Philadelphia. 11:00 a.m." He then corrected the tweet by clarifying it was not the luxury hotel.

The mishap went viral online, with many finding humour in the press conference location.

Whilst many believed the booking of the Four Seasons Total Landscaping was a mistake, The New York Times reports that the president had misunderstood his advisers and assumed it was the luxury hotel when he sent the initial tweet.

Despite Joe Biden giving his victory speech on Saturday night, local time, the president seemingly remains confident that he can overturn the result of the election via his legal proceedings.

According to CNN, Trump's son-in-law and senior adviser Jared Kushner has approached him to concede. The publication also reported that the First Lady Melania Trump has also privately urged the president to admit defeat. Publicly, though, Melania Trump appears to be standing by her husband's baseless claims of voter fraud.

The American people deserve fair elections. Every legal - not illegal - vote should be counted. We must protect our democracy with complete transparency.

Trump has spent months attempting to undermine the electoral process and it looks like nothing is changing.

"The simple fact is this election is far from over. Joe Biden has not been certified as the winner of any states, let alone any of the highly contested states headed for mandatory recounts, or states where our campaign has valid and legitimate legal challenges that could determine the ultimate victor," Trump said in a statement released by his campaign.

Despite his insistence, many Republicans have also publicly encouraged the president to concede.

Fox News host Laura Ingraham, a staunch Trump defender, on Friday urged the president to accept an unfavourable outcome with "grace and composure".

According to AAP, one Trump adviser said White House Chief of Staff Mark Meadows would likely be the aide who would ask Trump to concede, but Meadows came down with the coronavirus this week and is under quarantine.

Moving truck outside of White House.

One day after election day, on November 4, a moving truck was seen outside of the White House.

I’m taking this live shot of the White House, with a moving truck outside, as a good omen. pic.twitter.com/Uz4SuoU94N

Fact-checking website Snopes confirmed the video was real, but acknowledged the reason for the truck remained unclear. Typically, presidents do not move out until January, when the official inauguration for the next president takes places. However, many have speculated and joked online that the moving truck was for the First Lady, Melania Trump.

Cackling that Melania is already moving out pic.twitter.com/2nGVJtpa8r