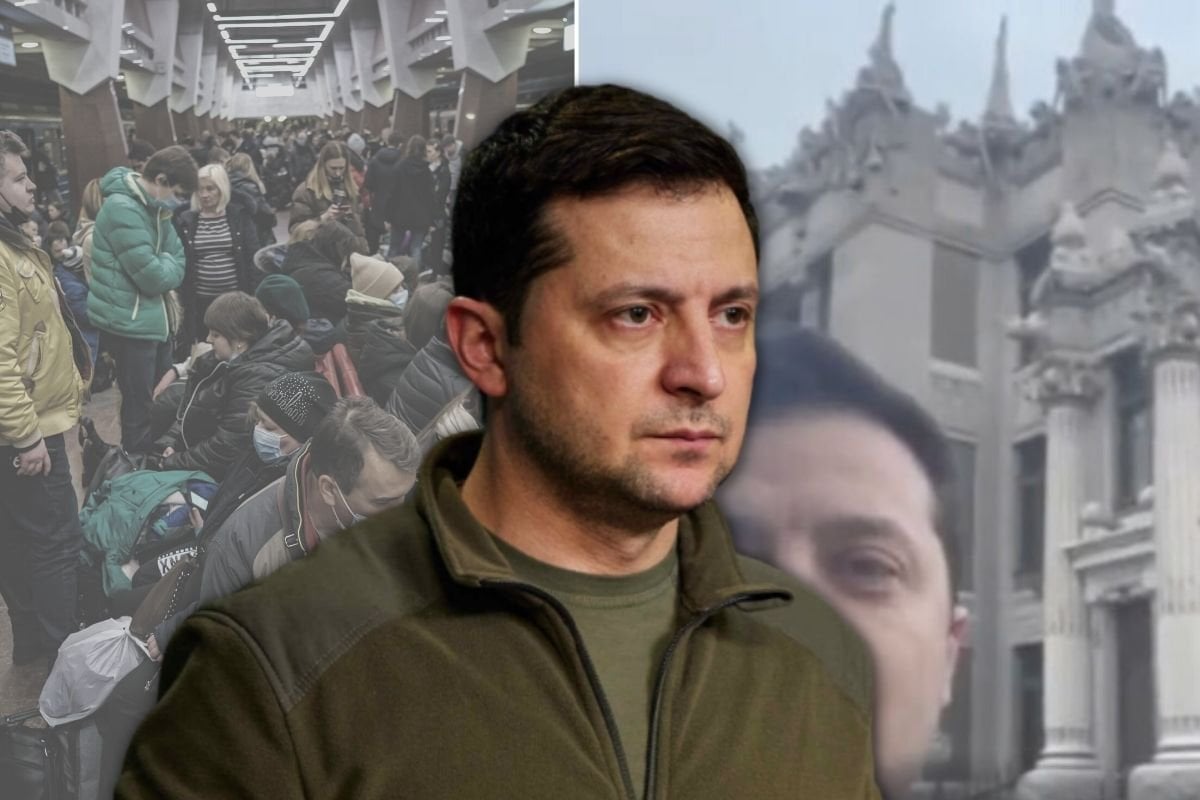 He knows Russia has weapons and artillery that well surpass his own.

He knows he's unlikely to survive the current attack on his country.

"The fight is here; I need ammunition, not a ride," he said on February 26, via a tweet through Ukraine's British embassy in response to a US evacuation order.

“The fight is here; I need ammunition, not a ride.” - @ZelenskyyUa on the US evacuation offer.

Ukrainians are proud of their President💙💛

Russia, perhaps, thought they'd be able to utilise his recent dismal approval ratings as they attempt to weaken Ukraine's leadership and (allegedly) install their own puppet government.

Ukrainian satisfaction with Zelensky had fallen to 28 per cent by late 2021, due in part to his inability to keep the overambitious promise he made when he took office three years ago: that he would end the conflict in eastern Ukraine.

Now, according to Kyiv Independent, 91 per cent are behind him.

In the face of extreme adversity, Zelensky has risen to the challenge. He's stood tall for his people. He's shown them why they elected him back in 2019 with a boggling 73 per cent of the election vote.

He was simply a comedian and an actor who tried his hand at politics, and won. An 'everyman' who promised to bring "professional, decent people to power".

But now he's showing Ukrainians - and the world - what he's made of.

Listen: Who is Volodymyr Zelensky? Post continues after podcast.

This is a man who knows how to rally. How to communicate in a way that not only inspires his people to defend their own, but shows great empathy and understanding.

He's not just a politician - he's a leader.

"Today Russia launched an invasion on Ukraine. Putin started a war against Ukraine, against all [the] democratic world. He wants to destroy my home: everything we have built, everything we have lived for. You are brave and unbreakable because you are Ukrainians," he told his country as Russia attacked late last week.

"[The] enemy has marked me down as the number one target. My family is the number two target. They want to destroy Ukraine politically by destroying the head of state. I will stay in the capital. My family is also in Ukraine," he said the following day.

From there, he alternated between formal press conferences and announcements from the streets of Ukraine, showing from the get-go he's not just a suit. He's on the ground. He's fighting alongside his people.

During one of his addresses on Monday, a veteran interpreter broke down in tears as she translated Zelensky's speech.

"We know exactly what we are defending, we will definitely win," were the words she was saying as her voice cracked.

Ukraine has fought back more fiercely than even Russia likely predicted. They would've been aiming for a swift occupation, but instead Ukraine has so far mounted a strikingly successful resistance causing Russian forces heavy losses. Zelensky has been leading that charge.

"We Ukrainians are a peaceful nation. But if we remain silent today, we will be gone tomorrow!" was one of his war-rally cries.

"I am here. We will not lay down any weapons. We will defend our state, because our weapons are our truth," was another.

"I do not want my pictures in your offices, for the President is not an icon, an idol or a portrait. Hang your kids' photos instead — and look at them each time you are making a decision," Zelensky told those rallying beside him.

"We need an anti-war coalition. We are defending our country alone. The most powerful forces from all over the world are looking on," was his critique to the rest of the world.

Strong. Powerful. Uniting. Critical. Zelensky is showing us what pure bravery looks like.

This is a leader who refuses to run scared, back down or give up; and his defiance is being mirrored by his people.

"Go f**k yourself Russia," can be read on digital road signs in Ukraine, in an effort to confuse Russian soldiers.

"Put sunflowers in your pockets," said one Ukrainian woman to a fighter while offering him the seeds of Ukraine's national flower.

"At least sunflowers will grow when you all lie down here," she told him.

Ukrainian woman confronts Russian soldiers in Henychesk, Kherson region. Asks them why they came to our land and urges to put sunflower seeds in their pockets [so that flowers would grow when they die on the Ukrainian land] pic.twitter.com/ztTx2qK7kB

Across Ukraine, we've seen teachers, accountants, even a former Miss Ukraine bear arms as they prepare to fight the Russian enemy.

One 21-year-old soldier stood alone manning a footbridge, terrified more for his hiding family than his own precarious position.

A group of Ukrainian soldiers confronted by a Russian vessel were told to lay down their weapons. "Russian warship, go f**k yourself," was their defiant reply as they refused.

A group of Ukrainian border guards were stationed on Snake Island, in the Black Sea south of Odessa, when a Russian warship ordered them to surrender under threat of attack.

They held their ground. All 13 were killed. pic.twitter.com/GMRsXQRSX0

Unarmed Ukrainians in Melitopol are confronting Russian soldiers with their arms raised in an attempt to push the vehicles back.

"Occupants," they're chanting, as they defend their country.

In Melitopol, unarmed Ukrainians are confronting the Russian soldiers. They are chanting "Occupants" and pushing the vehicles back. pic.twitter.com/PMges2cHhU

It goes on, and on. The stories of inspiration and courage are coming in thick and fast amongst the devastation.

Heroism inspires heroism, and Ukrainians have it in spades. Zelensky is just leading by example from the top.