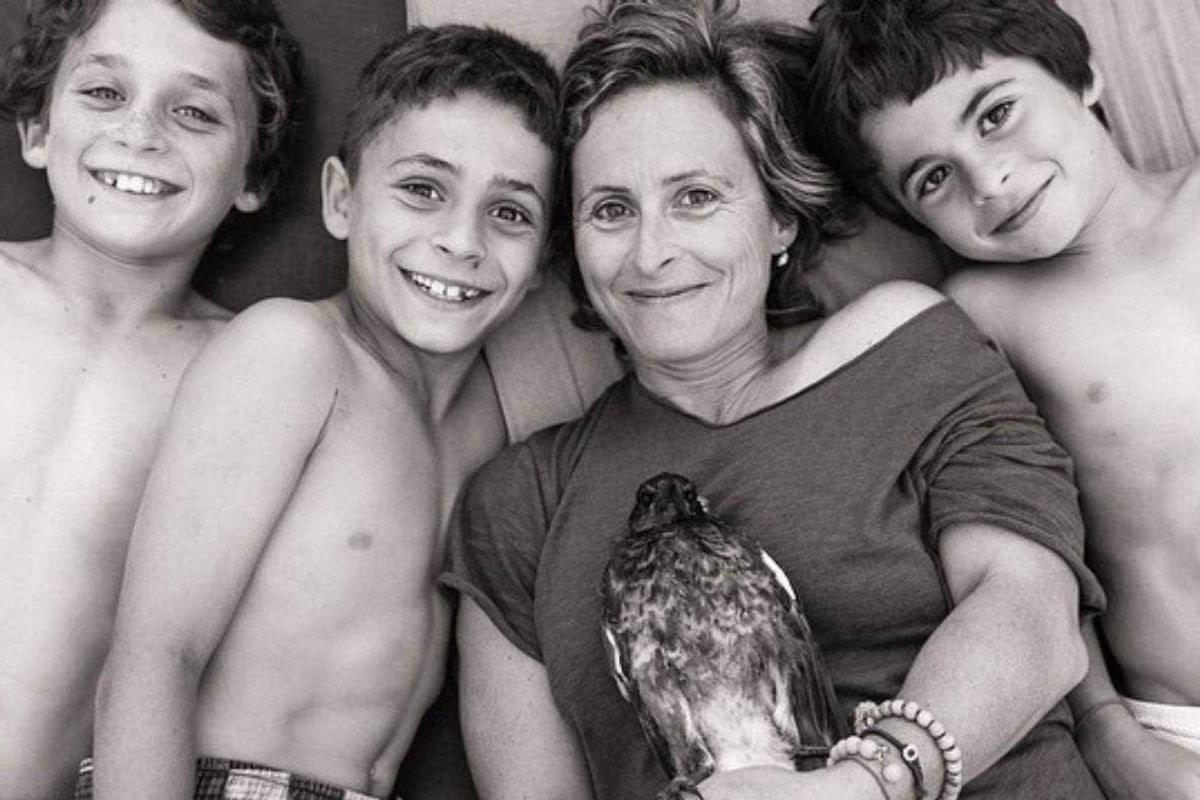 Penguin was a quirky member of the Bloom family. Penguin Bloom, they called her.

She enjoyed being held and, especially when she was a baby, liked sitting in the laps of people. She was also a particularly good listener. As she grew older and wiser, she would leave the Bloom home more often, but never for long, before she would return to the familiarity of her adoptive family.

Penguin was a magpie - an unconventional ‘child’. But for two years, she was like the sixth family member of the Bloom family, along with parents Samantha and Cameron and their three sons, Reuben, Noah and Oliver.

Penguin was never a pet. She was a wild bird, who had the freedom to take off whenever she wanted. But the window was always open for Penguin - an invitation she didn’t like to fly away from.

Listen to Mia Freedman chat to Sam and Cameron Bloom on No Filter. Post continues after audio.

When Penguin was a fragile baby, son Noah came across the magpie at his grandmother’s place. They could see she had been injured and had flown out of her nest. They were concerned she would die if they left her there alone.

So they carefully picked her up and carried her to their home. They saved the little bird, but what they didn’t know is that the baby bird would actually be saving them.

Penguin entered their life right when a beacon of light was exactly what they needed.

In 2013, the family of five were on a holiday in Thailand. On a rooftop deck, they were taking in their surroundings when Sam leant against a dodgy railing. It collapsed, dropping Sam six metres to the ground. She was paralysed from the chest down, suffering from a spinal cord injury.

It would be seven months before Sam could return home to Sydney’s Northern Beaches, where she'd have to start her new chapter. She was in a deep depression, she tells Mamamia. Prior to her injury, she had always led an active life of surfing and running.

“I was devastated to have that taken away,” she says.

She was angry, too.

“We live at the beach and it just rubbed it in even more. I would be sitting here staring at people surf. It would make me so sad. I found it hard to get out of bed, because I had nothing to do. It was like I was on house arrest.”

Sam also felt grief for how her injury was impacting her family.

“I felt like the worst mum in the world because I wasn't the same mum. I wasn't energetic and happy.  I was angry and I felt so guilty that I wrecked their lives and their childhood.”

Three months after returning home, Noah found the baby magpie. It was a profound moment, even if it did not announce itself on the spot.

The family decided to call her Penguin because she was black and white, and her walk was more like a waddle when they found her.

“We didn’t realise she’d stay with us for quite so long,” Sam laughs. “In a selfish way for me, she gave me something to look after.

“Caring for Penguin gave me the confidence that I actually was capable of looking after something, which I didn't think I was.”

When Sam's kids were at school and her husband was at work, she loved having conversations with Penguin. Sam provided a shoulder for Penguin to rest on, and Penguin provided an ear for Sam to talk to. For each other, they were the source of strength they needed.

“I spoke to her about how much I hated this, with what had happened. I felt bad for Cam because he had so much to deal with; obviously with me and looking after the kids and work too. So I didn't want to constantly complain to him. So I would just complain to Penguin instead.”

The kids loved their new sibling too. Sam’s favourite memory is from her eldest son’s birthday, when he turned 13. At the time, they hadn’t seen Penguin for about six weeks and were worried something might have happened to her.

“Imagine if Penguin came back today,” Sam remembers joking with her son.

“We went to my mum's for lunch and Cam got a phone call from a lady saying, ‘I think Penguin is inside my house.’ Cam drove over and it was Penguin. So he picked her up and brought her home. It was the coolest surprise.”

Cam is a professional photographer and has captured Penguin’s candid moments with the family.

From Penguin cuddling the boys in bed to Penguin pecking Sam on the lips, and casually sitting on their heads, the photographer captured the simple but extraordinary moments and shared them to an Instagram page that went viral.

In 2016, Penguin Bloom was published and became a best-selling book, before it was optioned for a Hollywood film of the same name. Academy Award nominee Naomi Watts plays Sam and Andrew Lincoln from The Walking Dead plays Cam. The film will be released in January 2021.

Watch the trailer for 'Penguin Bloom' here. Post continues below.

The movie, filmed last year, was shot inside the family’s real home in the beachside suburb of Newport.

Sam, who has seen the movie now a couple of times, says they’ve kept the story “really real”.

“She looks very sad and very angry a lot of the time. A lot of the scenes really did happen.”

Sam was often on set, she shares, because Watts wanted to ensure she was playing her character authentically.

“I used to write stuff down on my phone and it was very dark and there was a lot of hate in it. I gave it to Naomi to read, so that she knew how I was feeling at the time. She said that really helped her just to get inside my head.”

Whilst Penguin continues to be a metaphorical light in their lives, they haven’t seen her since 2015. Sam had been working hard on her rehabilitation and in 2015 had made the Australian paracanoe team for the world championships in Milan. She went over to compete, with Cam and their sons leaving three weeks after her.

“I hope that she started her own little family.” 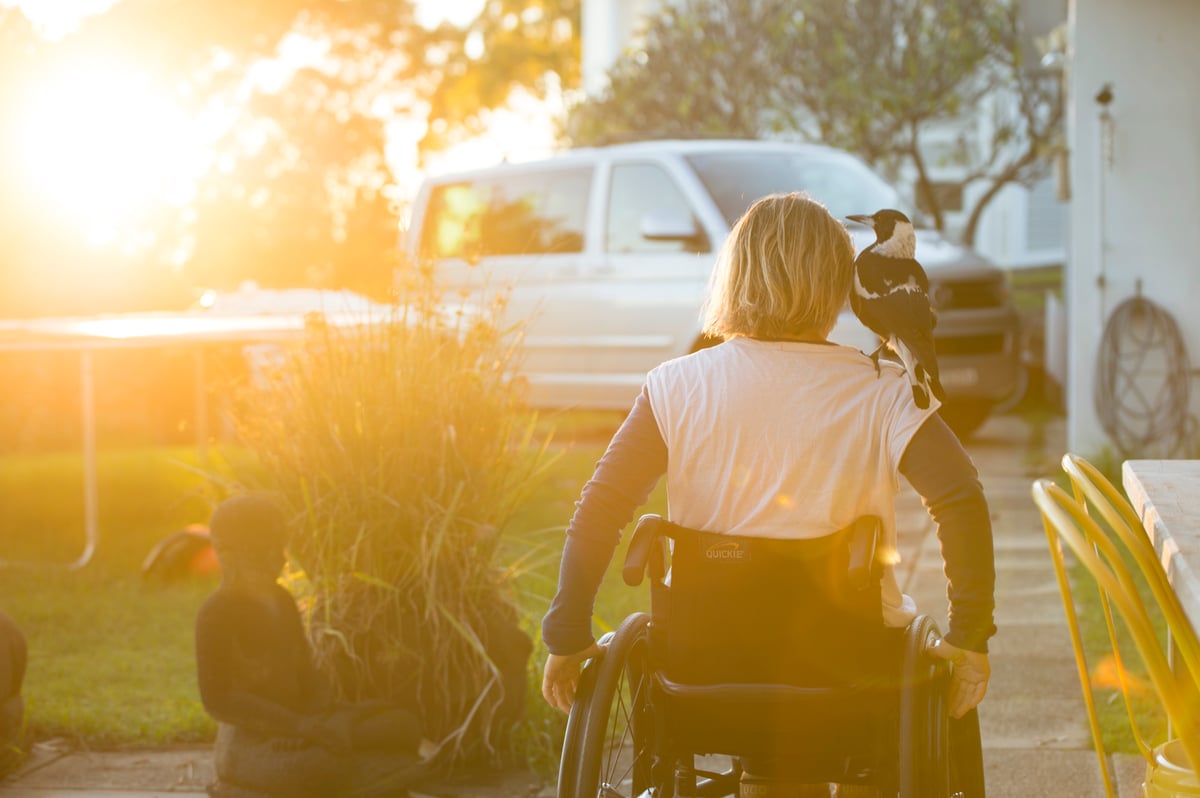 Sam dreams about a day where she can walk again. Right now, there is no cure for spinal cord injuries. However, there have been promising advancements in medical research recently and physicians and scientists are hopeful that a cure is within reach. There is hope that the Hollywood film will raise much-needed awareness for the importance of their research. People can donate to SpinalCure Australia here.

“You have no idea what a cure would mean,” Sam explains. “It would be life-changing for millions of people. I have struggled with this injury ever since it happened and I was 41 when I had my accident. When I see young people with a spinal cord injury, it is just so devastating.”

Although there have been undeniable silver linings, Sam doesn’t see her story as one with a happy ending. And with her story now turned into a movie, she had a request: “I don’t want the ending to be, 'Life is great now'.”

“I still get envious of seeing people run on the beach and just living a normal life. I can't say I love it. I'll never really accept it, but I guess it gets a little bit easier as time goes on.”

One thing that continues to bring her joy is magpies. As she speaks to us, she shares the family have just taken in another baby bird, who they’ve called Van.

“He's three months old and he can't fly at all. His wings are really brittle. So we're just feeding him up, hopefully making him strong so that he can eventually fly away.”

You can donate to SpinalCure Australia here.

Penguin Bloom is out in cinemas in Australia on January 21, 2021.