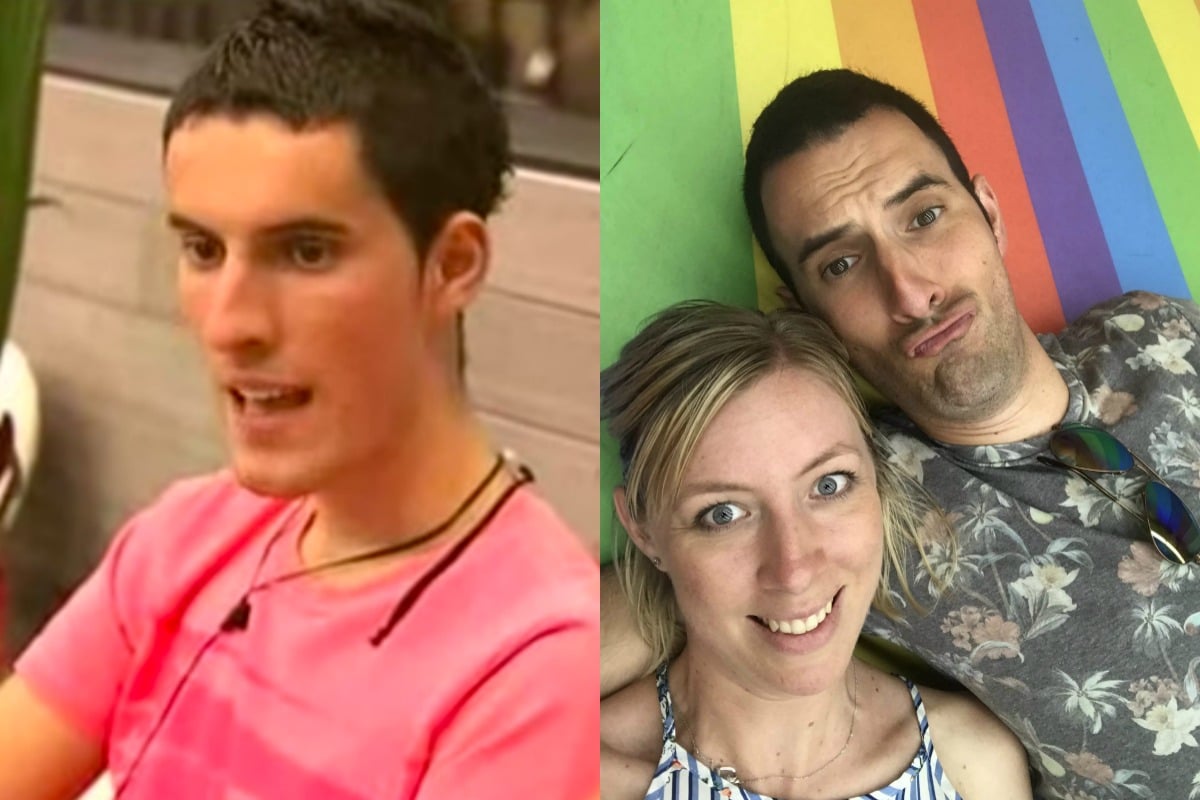 Big Brother fans will remember housemate Travis Keyser for his high-pitched voice and his “posimistic” attitude. But his now-wife Carisa didn’t even catch a glimpse of him when he was on TV back in 2008.

“Her family were quite conservative Christians, so she wasn’t allowed to watch the show, or she chose not to watch the show,” Keyser explains to Mamamia. “I think in previous years, Big Brother had the perception of being a little bit perverted.”

During his time on the show, Keyser, who’s also a Christian, definitely wasn’t perverted, even a little bit. He was “posimistic” – a word he’d invented, meaning positive and optimistic.

Watch: If reality TV interviews were honest. Post continues below.

However, the show’s fans felt that Keyser was being bullied in the house. In one incident, he was hospitalised after another housemate squirted body wash in his eye.

“It literally burnt all the layers of my eye off,” Keyser says.

And yet, while he was in the house, he didn’t feel he was being bullied.

“I don’t question people’s intentions, I take people at face value,” he explains. “When I came out and saw the footage, I was like, ‘Yeah, well, that kind of does look bad.’”

Keyser was popular with fans, just missing out on the final three. After the show, he did a round of nightclub appearances, which turned out to be an interesting experience.

“This lady came up to us and she’d just had a boob job and she was like, ‘Oh, can you sign my boobs?’” he remembers. “I was like, ‘Oh, I don’t know if I can do that. Maybe you should get one of the other housemates to sign your boobs? I’ll sign your arm.’ It was a real eye-opener to see how forward people can be.”

Meanwhile, Keyser was finding that a lot of people were contacting him via social media, having felt a connection to him while watching him on TV.

“All of a sudden people were confiding in me with these big personal issues that they were going through,” he explains. “A lot of people think that I’m gay, which I’m not, and I was getting a lot of people, particularly schoolkids, who were coming to me and saying, ‘I’m getting a hard time at school because of my sexuality.’

“For me, that was the most valuable opportunity that I got, just to be a friend to people who were going through stuff and didn’t feel they had people that they could confide in. As a Christian, I think, as people, we should be accepting one another and loving one another and just being there for each other.

Listen: What really goes down in a Big Brother audition? Post continues after audio.

Not long after Big Brother, Keyser was offered a job hosting breakfast radio in the NSW outback town of Broken Hill. He said yes, and stayed for three years.

He even ran for mayor of Broken Hill.

“I ended up doing better than I thought. I think, out of the 25 applicants, I came fifth.”

Keyser returned to Sydney and worked for Nova before taking up a job selling advertising for Christian radio station Hope 103.2. It was there that he met Carisa, who was working as a receptionist.

“She opened the door for me for my second job interview here at Hope. She’s obviously beautiful, and I was like, ‘Wow, she’s amazing,’ and then we just got chatting, and really hit it off.”

He says Carisa “friendzoned” him at first.

“Two years later, I eventually wore her down with my charm and charisma and convinced her to go out with me.”

Twelve years after going on Big Brother, Keyser is still “posimistic”. He loves his job and feels “very blessed” with his life in general.

“I am probably the luckiest guy on the planet. My wife thinks I’m on drugs because on Sunday night I’m actually looking forward to going back to work.”

Even his high-pitched voice, which sometimes results in people on the phone assuming he’s a woman, is “a blessing”.

“I just think it gives me the opportunity to have such a good laugh with people,” he says.

Keyser has some advice for this year’s Big Brother housemates. It relates to their “two minutes in the spotlight” after they come out of the house.

“There’s people out there that are going to be watching the show that are going to love you,” he says. “Just really take the time to make their day, if you can, by saying hello and having a chat. Use the opportunity to make everyone feel like a someone.”