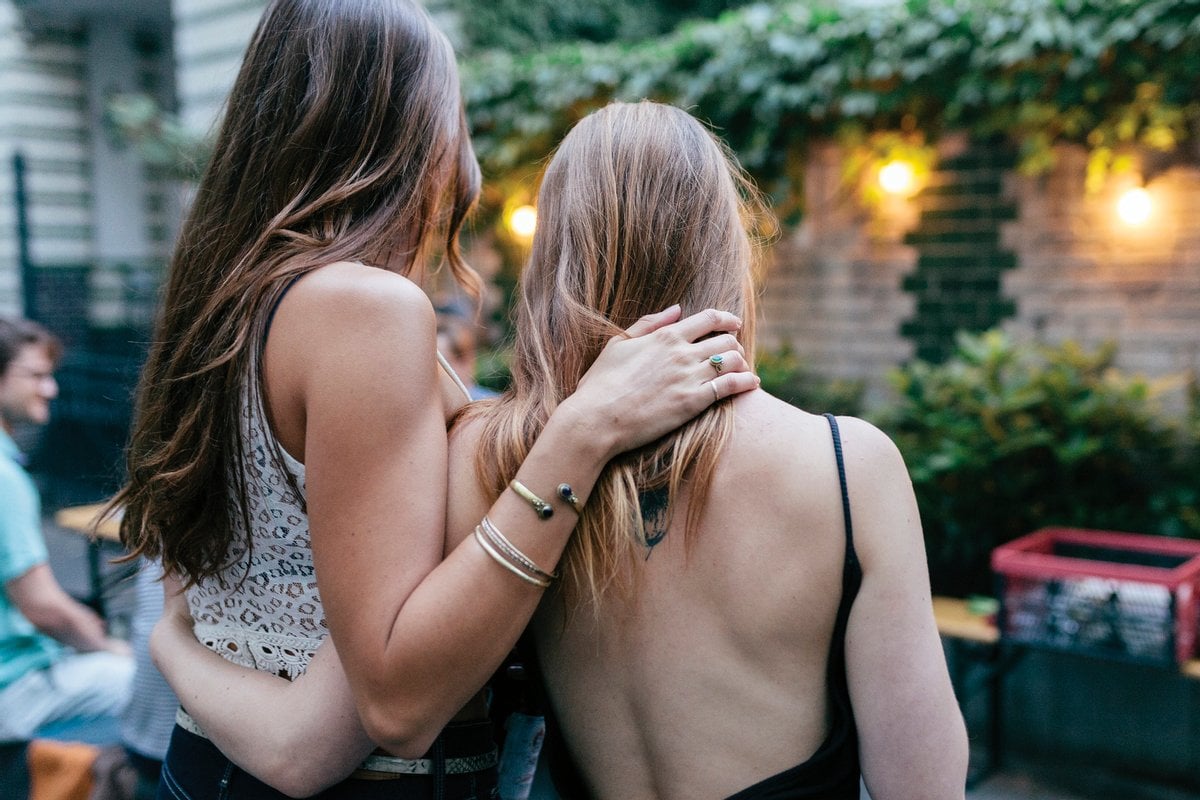 I’ve been a people-pleaser my entire life.

For most of my childhood, I said yes to any classmate or friend who asked for my help. This habit carried on into adulthood, where I took on tasks I didn’t have the capacity for. I went above and beyond for friends and co-workers, even at the cost of my mental health and well-being.

I hated saying no to people.

Side note: Here are the horoscopes and self care. Post continues below.

Because of this personality trait, I often found myself in one-sided friendships with individuals who didn’t have my best interests at heart. People who lied to me, who took advantage of my kindness. And in my twenties, rather than being alone, I kept friends in my life who weren’t actually very nice to me at all.

Out of all the "friends" I had that weren’t actually friendly, my old housemate Stephanie* was one of the most toxic friendships I ever had.

It took years of mistreatment before I finally stood up for myself and said I’d had enough.

Stephanie was never a close friend of mine before she became my housemate.

I was very desperate for someone, anyone, to take the spare bedroom in my apartment and help me pay for rent.

After I interviewed two or three horrible potential tenants, especially the one who kept a pet snake and two spiders, I reached out to Stephanie who I knew was looking for a place.

And just like that, this friend of a friend became my roommate.

Stephanie was quiet and distant, but she kept clean and didn’t make any noise late at night. Eventually, she and I warmed up to each other, and we started spending time together outside of our two-bedroom flat.

Everywhere we went, I noticed Stephanie liked to talk over me in conversation. She didn’t really ask me what I was in the mood for when we talked about getting dinner or drinks.

She asked me to drive all the time but never offered to drive her own car. She planned and expected everyone around her to go along with her plans, no questions asked.

As a people-pleaser who avoided confrontation better than anyone else, I went along, no questions asked.

One night, we went to dinner with some friends, and it ended embarrassingly for me.

Stephanie had plans with some friends for a casual girl’s night at a local bar. She invited me along, which I appreciated, and I met them after work.

"It’s just a few of the girls you know. Low-key," she mentioned.

I showed up in my casual Friday outfit from work – some jeans, flats, and a sweater.

I was the only one totally underdressed. It wasn’t at a bar; Stephanie had made a reservation at a five-star restaurant. She walked over to me in tall heels and a colourful dress.

"Oh, I forgot to tell you it was a nice dinner, didn’t I? Crap, I’m sorry," she said as we walked into the restaurant together.

For a moment, I wondered if she did it on purpose. Would she do something so petty to me? No, I thought. That wasn’t like her. I brushed it off, and I had a great night, although I stood out like a sore thumb among a table of beautifully dressed girls.

A few months later, Stephanie invited me to fly with her to visit a friend in Los Angeles for a music festival. It was one of my favourite bands, so I said yes. I purchased my festival tickets and my flight.

She told me I didn’t have to worry about a hotel because her friend had a spare bedroom for the two of us.

When we landed in Los Angeles, she called her friend who was picking us up and let her know which terminal we were waiting by.

"I’m five minutes away," her friend said through the speakerphone.

"We’re both wearing black tops and jeans. You’ll see us."

"Both? Who are you with?" her friend asked.

"My roommate flew with me. Do you have space in your car?"

"Crap, no. I don’t have enough space for everyone. Seth and Daniel are with me. I have to turn around and drop them back off so I can fit you guys. It’ll take some time because there’s a lot of traffic. Unless you just want to take a ride-share to my house?"

"It’s going to be so expensive. Alright, we’ll just take an Uber."

I stood there, angry.

Stephanie hadn’t told her friend that I was coming to Los Angeles with her. And I wasn’t thrilled that they knew me as the "roommate."

"I thought she said it was okay if I stayed at her house?" I asked. "Did you tell her I was coming?"

Stephanie brushed me off.

"Her place is huge, it’s really not a big deal. Trust me."

I couldn’t understand how someone could treat someone else like this. I would never want to make a friend feel like a last-minute addition to my plans and then ignore them after hurting their feelings.

But I didn’t stand up for myself. I didn’t tell her they hurt my feelings. I just went along with it.

The worst was yet to come.

After the airport, I ignored the hurt feelings and misunderstanding from earlier. Stephanie’s LA friend actually lived in a huge house, and I had a bedroom and bathroom to myself. I didn’t have to pay for a hotel, which was nice. I focused on seeing my favourite band and ignored everything else.

That night, we got ready as a group and piled into the cab that was taking us to the venue. It was perfect timing that my favourite band was playing right before Stephanie’s favourite band on the same stage.

Stephanie’s friends, Amber and Seth, bought us a round of drinks. We chatted while we got buzzed, and we laughed a lot. I was having a great time.

And then, as it got closer to the start time, Stephanie’s band announced on Twitter that they were cancelling their show. There were some delays at customs at the airport, meaning they missed their flight. They weren’t going to perform.

Stephanie was devastated. She paced around the small space we had by the stage and cursed her bad luck. And you probably know what she did.

She suggested we leave the concert.

"No!" I yelled, hardly recognising my courageous voice. "I’m not leaving. My band is performing in two hours and this is why I came to L.A. I was going to stay to watch your band. Are you just going to leave me here?"

But my plea for Stephanie to show me some semblance of a true friend wasn’t enough. She and her friends were devastated that their band wasn’t performing, and they didn’t want to be there anymore.

"We’re going to go. But if you want to share a cab home with us, you’re more than welcome to!" they said.

Gee, thanks, I thought.

I didn’t want to stay alone at a concert in a city I didn’t live in. I didn’t want to deal with the chaos of trying to find a ride in Los Angeles at the end of the show while thousands of other concert attendees tried to do the same.

It was easier for me if I left the concert with the girls, so I left and missed my favourite band.

Stephanie was still upset because she missed her band, and she couldn’t stop talking about it. No one apologised to me for trying to leave me behind.

We got home and Stephanie immediately perked up, completely forgetting about the heartbreak she was feeling over her band.

I went upstairs to shower, and Steph came in my room and told me to get ready so we could go downtown for drinks.

Stephanie and her friends went out and left me in her friend’s house alone. The next morning, we flew back in silence and we never talked about it. We continued being "friends", if that’s what you can call it. But we stopped hanging out outside of our apartment. A few months later, she moved out, and I didn’t hear from her in over a year.

And the only reason she contacted me, one year later, was to ask me to write her a letter of recommendation for a volunteer position she was applying for.

I refused to write her that letter, and I never heard from her again.

After I ended this friendship, I saw how incredibly toxic she really was. She was never my friend. And being alone would be a better use of my time and energy than spending it with people who were taking advantage of my kindness.

If you are reading this story and realising that you have a friend like Stephanie, perhaps this could be the sign for you to take a closer look at your friendship.

If your "friend" is someone who doesn’t treat you well, someone who ignores your wants/needs, and expects you to drop everything for them at the last minute, that’s a toxic friend.

If your "friend" forgets about your plans or gets upset when you don’t pick up the phone but rarely picks up your calls, that’s a toxic friend.

If your "friend" regularly invites you for drinks or dinner and then backs out at the last minute, that’s a toxic friend. Especially if they don’t apologise.

If you were reading this story and asking yourself why I didn’t walk away sooner from such a toxic person, I truly wish I had the courage to. I didn’t, not back then. I accepted less than I deserved from friends and romantic partners all the time.

But this is where I drew the line. I was done with toxic people who were disrespectful.

Stephanie was not a real friend. Sure, no friend is a perfect friend. People make mistakes. We’re only human; it’s normal to forget about plans or birthdays and feel like crap afterward.

I was a nice person to others, but it was time to be nice to myself.

When you’re a people pleaser to a fault, it’s common to give the benefit of the doubt to the people you care about, and sometimes, it results in your pain, your sacrifice, your mistreatment.

This is not okay.

If you’re the one making the sacrifices and always getting the short end of the stick in your relationship, it is more than just an oversight.

The biggest red flag for me was the way I felt around Stephanie. When she was with me, I usually felt unwanted, awkward, out of place, and inferior. I felt forgotten and used.

A real friend will not go out of their way to make you feel bad.