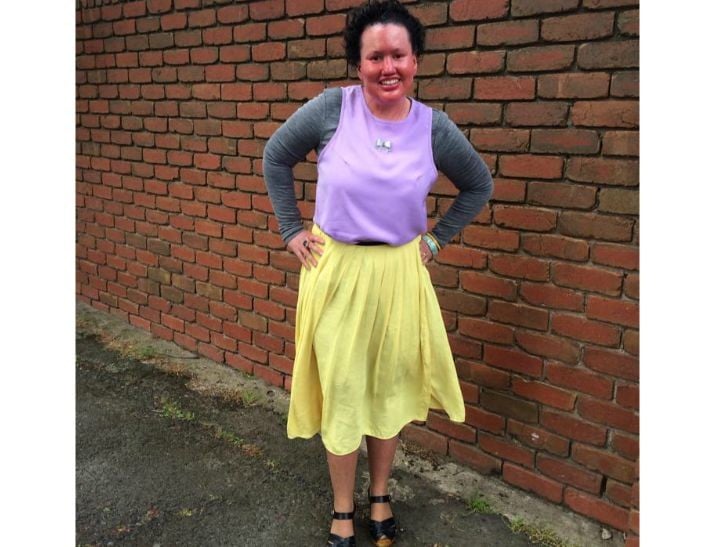 Do audiences find Tim inspiring because he’s disabled, or because of his extraordinary talent?

You know, disabled people being applauded for doing ordinary things. Like banking, or working.

Tim is a brilliant singer, who just happens to be in a wheelchair. That’s his backstory. Like X-Factor winner Dami Im was born in South Korea and came to Australia when she was nine. Like Shannon Noll worked on the family farm prior to coming second to Guy Sebastian on Australian Idol. And like Karise Eden was a foster child. Those are the facts of their lives. Every successful reality TV star has a back story. That’s the dramatic effect the producers employ. Contestants rising above adversity tug at the heart strings.

Tim was paralysed from the neck down after a surfing accident when he was 19. He only has use of his arms.

Tim told The Voice coaches “My level of injury is quite high and I don’t have the use of my stomach and diaphragm … I invented different ways to hit the notes.” Singing is hard work for him. Ricky Martin called him a “miracle”, which might make disability activists uncomfortable, but it IS really amazing that he’s trained himself to sing using different parts of his body. That’s his reasonable adjustment.

One thing I like about talent shows like The Voice and Masterchef is the diversity they showcase. Contestants are from different countries and religions, have various disabilities and sexual orientations, which represents the richness of our community more than fictional TV.

Stella continued: “My everyday life in which I do exactly the same things as everyone else should not inspire people, and yet I am constantly congratulated by strangers for simply existing.”

Have a think about why you think someone with a disability inspirational.

Is it because their situation makes you feel better about yours? Or are they actually doing something really amazing?

Tim McCallum is not just doing something ordinary. This guy isn’t just buttering his toast or doing the groceries while in a wheelchair. He’s singing opera live on national prime time TV. Being judged by international singers and social media audiences.

And I think we need to give him credit for his achievements. Making The Voice is a big deal for anyone. He’s been a singer for years – and this program might just give him the break he needs.

Sarah Barton, founding series producer of No Limits – the community TV program that launched Tim’s media career (and where he shared the desk with Stella Young) believes it is great we are seeing positive stories about disability in the media. “Anything that puts a disabled person in the spotlight alongside everybody else, achieving something is fantastic”, she says. Sarah has known Tim for many years and says his aspiration has always been to sing.

Watch Tim performing on The Voice. Post continues below.

Tim’s not calling himself inspirational, telling The Today Show “I try to blow that myth out of the water that you can actually sing while you’re sitting down.”

We do need to question why Jessie J was moved to tears, and why audiences found Tim inspirational. Was it because Tim has a disability, or because he’s got amazing talent? Perhaps it’s also because the show’s judges, producers and audience haven’t been exposed to disability? And are they reacting the same emotional way to contestants without disabilities?

The ongoing problem with the portrayal of people with disabilities is they’re only ever tragic or heroic, never just living an ordinary life. I think Tim just wants to sing – and working hard talent his talent is a part of his ordinary life. He doesn’t want to be a superhero in a wheelchair. He wants (and deserves) a record deal and a season at the Opera House.

What do you think about the way people with disabilities are portrayed?

Stella Young: don’t call me a “person with a disability.”

Carly Findlay: How to defend yourself when your photo is ridiculed on the internet.

Carly Findlay is an award-winning writer, speaker and appearance activist, living in Melbourne, Australia. She challenges people’s thinking about what it’s like to have a visibly different appearance. She blogs at http://carlyfindlay.blogspot.com/ and can be found on Twitter @carlyfindlay and Facebook – Facebook.com/tune.into.radio.carly

Hi,
I am blind and can't see how he looks or anything else on TV. But I can certainly appreciate his voice - I think his singing is amazing regardless of his disability. Personally I don't get impressed because of some singers amazing good looks and judge them all on their voices. I am really pleased that we have an amazing singer in Tim cause I don't understand how some of the others got picked.
Dale - https://onlinebeginnershub.com

I don't know Jessie J's full story, but I recall hearing that she herself suffered a stroke once. I think it was more likely that this experience is what connected her emotionally with Tim, particularly with him being able to learn to sing another way without the aid of his diaphragm.
I have a disability myself, and just want to be accepted like everyone else. I am also aware, though that I have had to 'adapt' to a world that rarely caters for people with disabilities. I think this makes most of us stronger and more determined to succeed in life