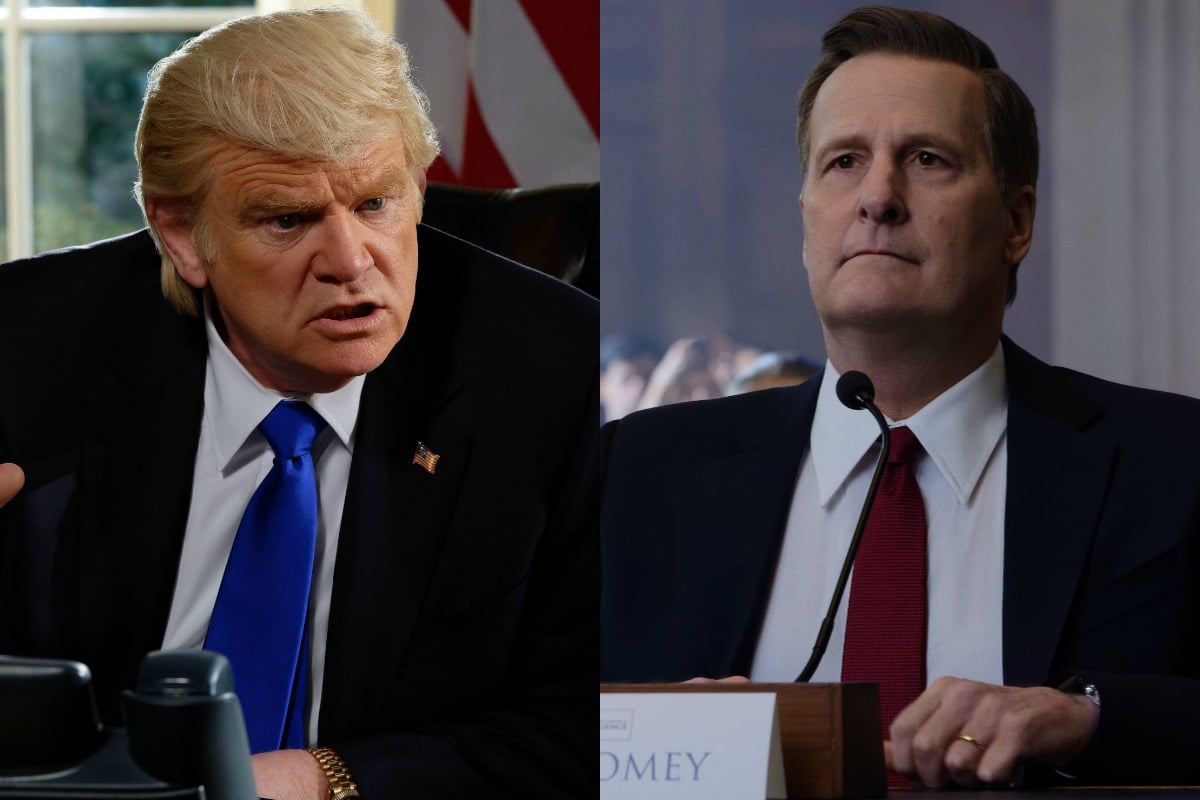 In November 2016, the world watched as Donald Trump – a businessman and television personality – was elected the President of the United States.

It was a history making moment, and one that came as a complete surprise.

After entering the presidential race without any prior military or government service, Trump was elected in a surprise victory over Democratic nominee Hillary Clinton, described by The New York Times as a "stunning upset".

Now, as the US election looms once again, Stan's The Comey Rule is revisiting the 2016 US election and its immediate aftermath.

The series, which will premiere on Stan on September 27 and 28, is based on former FBI director James Comey's book A Higher Loyalty: Truth, Lies, and Leadership.

The two-part series primarily follows the relationship between President Donald Trump (played by Brendan Gleeson) and James Comey (played by Jeff Daniels) in the months before and after Trump's surprise victory.

The series initially kicks off in 2013 as President Barack Obama (played by Kingsley Ben-Adir) appointed Comey to the position of Director of the FBI.

Typically, the Director of the FBI serves a single 10-year term. But for Comey, that wasn't quite the case.

Part one of the series follows the FBI's investigation into Hillary Clinton's emails, which began in July 2015, and the impact they had on the 2016 US election.

While the case was initially closed, Comey later reopened the investigation just days before Americans went to the polls.

It was a controversial decision. In fact, in the series, Comey's wife, Patrice (played by Jennifer Ehle), begs him to wait before reopening the case.

"You are going to convince everyone that she is 'Crooked Hillary,'" she said.

Although the scene was dramatised, Patrice has since admitted publicly that she was devastated by the election results.

Clinton herself has also said that she partly blames Comey's decision to reopen the case for her election loss.

The second part of the series follows the tempestuous relationship between Comey and Trump within the first few months of Trump's presidency, up until Comey's dismissal.

Who is James Comey?

The controversial figure worked on a number of key investigations, including Hillary Clinton's use of a private email server and Russia's rumoured role in Trump's election campaign.

Over the course of his career, Comey has been publicly criticised for his handling of some of those key investigations.

After he reopened the Clinton email case in the days before the 2016 US election, many Democrats and even Republicans insisted that the email probe caused Clinton to lose the election.

As for the investigation into Trump's presidential campaign and a possible coordination with Russia, Trump and other Republicans criticised Comey for his supposed bias against Trump.

What happened between James Comey and President Trump?

Comey and Trump met for the first time after Trump was sworn in as president.

On January 27, 2017, it's reported that Trump and Comey dined at the White House alone.

In February, as the Russia investigation was underway, Trump reportedly asked Comey to drop the investigation into National Security Advisor Michael Flynn, who was accused of "willfully and knowingly" making "false, fictitious and fraudulent statements" to the FBI about conversations with Russia's ambassador.

"I took it as a direction," Comey said. "I mean, this is a President of the United States with me alone saying, 'I hope this.' I took it as, this is what he wants me to do. I didn't obey that, but that's the way I took it."

Comey did not drop the investigation into Flynn, and he was later forced to resign.

As the Russia investigation continued, Comey said that Russia is the "greatest threat of any nation on Earth".

"One of the biggest lessons learned is that Russia will do this again. Because of the 2016 election, they know it worked," he said, according to The Independent.

....untruthful slime ball who was, as time has proven, a terrible Director of the FBI. His handling of the Crooked Hillary Clinton case, and the events surrounding it, will go down as one of the worst “botch jobs” of history. It was my great honor to fire James Comey!

Comey was reportedly caught off guard by the news, as he found out about his dismissal from television news reports.

But it's still not quite clear why Trump decided to fire Comey.

While Trump's administration claimed "the way [Comey] handled the conclusion of the email investigation" was behind the firing, others questioned whether Comey's investigation into a possible collusion with Russia was behind Trump's decision.

How has Trump responded to The Comey Rule?

Ahead of the release of Comey's book, A Higher Loyalty, Trump went on a Twitter rampage, claiming that Comey's actions could lead to jail time.

He criticised Comey's "many lies", and referred to the memoir as "badly reviewed".

Slippery James Comey, a man who always ends up badly and out of whack (he is not smart!), will go down as the WORST FBI Director in history, by far!

The US President is yet to respond to his portrayal in The Comey Rule.

The Comey Rule will premiere only on Stan on September 27 and September 28.