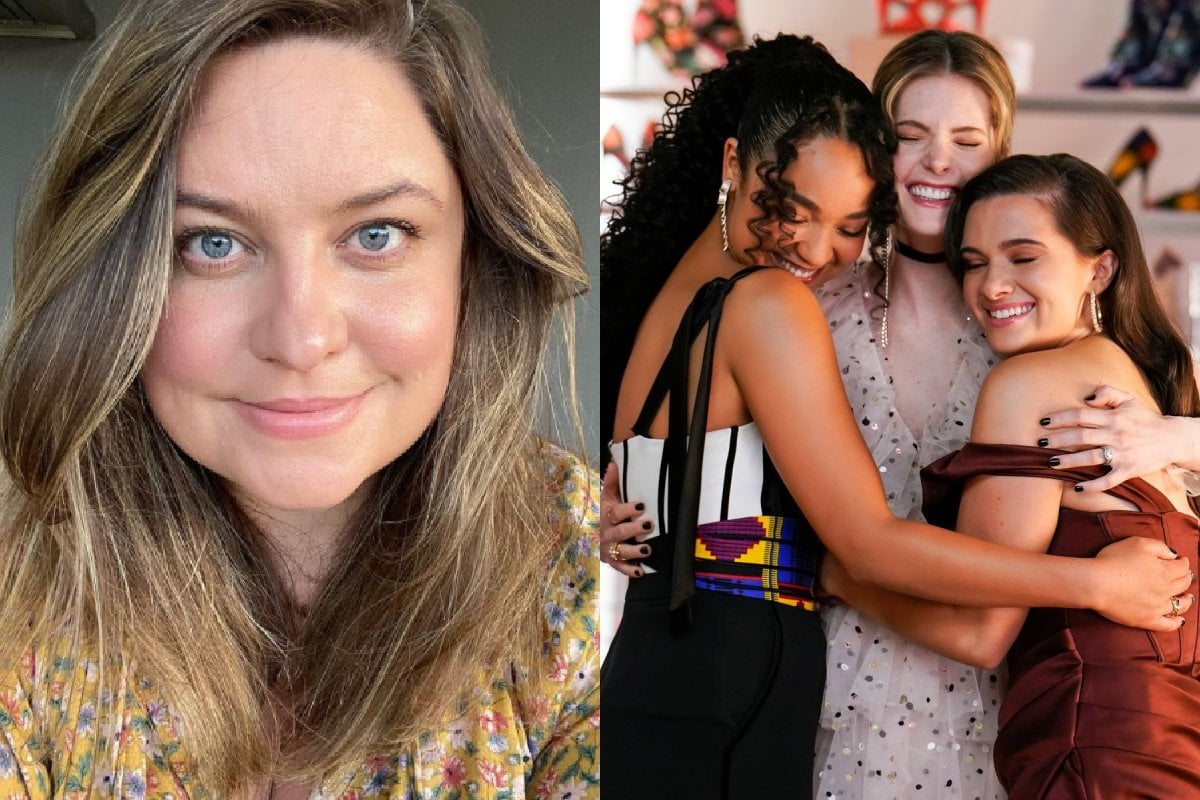 Warning: This story contains many spoilers for The Bold Type finale episode. If you haven't watched it, go watch it and meet us back here, you silly duffer.

Last night, our three favourite magazine besties screamed into the abyss for the last time.

The scene, in the final episode of Stan's The Bold Type, was a call back to the pilot episode where Jane Sloan (Katie Stevens), Kat Edison (Aisha Dee) and Sutton Brady (Meghann Fahy) stood on a subway platform, held hands, and screamed as a train screeched past.

Back then they were all assistants at Scarlet Magazine. They had all the grit and determination of 25-year-olds set on making something of themselves in the media industry. They were hungry, competitive, and fiercely protective of each other's dreams. They had no filter. They made terrible, cringeworthy mistakes. They questioned the decisions of people with decades more experience than them.

Watch the trailer for Stan's The Bold Type. Post continues below.

In short, they were completely insufferable yet totally relatable.

They were every millennial in the workplace but on steroids. What the show did so well was to capture the millennial dream of having it all - of being someone, of doing something that matters, all while having a tight group of friends and a clickable sex life - and packaged it up in the glamorous world of women's media.

Because in 2021, it's not enough to have a job. You also need to have an Instagram following. And a purpose. And a sponsorship agreement with a sex toy company, apparently.

The show basically sold us an unattainable dream, and we gobbled it up like we gobbled up The Devil Wears Prada 15 years ago, and how we'll gobble up whatever show takes The Bold Type's place.

We love to see beautiful people make terrible mistakes but then get everything they ever wanted in the end, anyway.

The show, like The Devil Wears Prada, was like catnip to people like me who work in digital and women's media. It was at once the most ridiculous thing we've ever watched and also... not untrue.

In my time working in women's media, I've seen Tiny Janes rapidly rise up the ranks. I've watched people get plucked out of obscurity and turned into "someone". I've seen women get everything they ever wanted and then decide they don't want it, actually.

I've watched women burn out. I've seen people thrown into the deep end, long before they were ready. I've noticed people stuck on a ladder that they desperately want to jump off.

That's why I watched most of the final season through rolling eyes. I thought I knew exactly how the finale was going to play out and I wasn't here for it.

If Jane Sloane became the editor-in-chief of Scarlet, I think I would have violently attacked my TV.

Throughout the final season, Jane was a woman who was drowning. Who was so far away from what she actually wanted to be doing and who was stuck climbing a ladder she wasn't sure she even wanted to be on.

Jane had been "chosen" from the very beginning of her narrative and by the end of the season, it was clear she was living someone else's dream. Someone else's vision of what her life should be. Perhaps it was Jacqueline Carlyle's vision or maybe it was the collective dream of every hopeful millennial hoping to "make it".

In the 'screaming scene' in the final episode, Jane, Kat and Sutton once again held hands and screamed into the abyss. This time they were standing on the kerb in Brooklyn. They were wearing coats in the same tones as the dresses they were wearing in the first scene. And they were openly screaming in public.

At first, I thought the scene signalled how far the women have come. How much they've grown since they were wide-eyed assistants.

I later realised that - for Jane at least - it was a scream for help.

Just as I had predicted (insert eye roll here).

For Jane, it felt like a dream come true. She had rapidly risen through the ranks from intern to editor-in-chief in a little over five years. She had smashed that millennial glass ceiling. It was out with the old (and experienced) and in with the new (and needy).

Thankfully, in the final 20 minutes of the series Jane had a realisation.

She realised that she's a writer, not a manager. She doesn't want to spend her days going to board meetings and working on spreadsheets. She wants to spend them working on those 400-word stories that go on the dot com and change the face of feminism forever.

Listen to The Spill's Laura Brodnik and Kee Reece as they unpack that finale episode. Post continues below.

She wants to jump off the ladder, slow down, and think about what she actually wants from life. After all, the girl who started this rapid journey half a decade ago was 25 and fresh out of college.

In another plot twist, she tells Jacqueline that Kat should be editor-in-chief and Jacqueline wastes no time offering the job to Kat.

While Kat is the same age as Jane, her appointment feels different. More hard-won. While Jane had remained (mostly) coddled in the bosom of Scarlet, running to Jacqueline for advice whenever she hit a stumbling block, Kat had been out there navigating the world on her own. Every day she faced the challenges that come with being a woman of colour and LGBTQI+. She'd had to fight harder for every little win.

She'd pushed the boundaries and gotten herself fired. She learnt what it was like to be voiceless, to work just to pay the bills. She'd run for local council, started a podcast, been publicly shamed. And at the end of that she was still prepared to roll up her sleeves, do the hard work, and come up with an original idea.

So, while it might have felt rushed and not completely thought out, The Bold Type gave us exactly the ending we needed.

It showed us there's more than one way to achieve our dreams and that we can jump off the ladder and still have a brilliant, satisfying career.

And that's a message that millions of millennial women desperately need to hear right now.

All five seasons of The Bold Type are streaming now, exclusively on Stan.

L
latte a year ago

Reply
Upvote
I hated the Sutton and Richard plot. I get the entire show is unrealistic, but this was next level. The writers had actually written the opposite and changed the script the night before for reconciliation - I wish they stuck to original to add a thread of realism!
C
c.brown88 a year ago