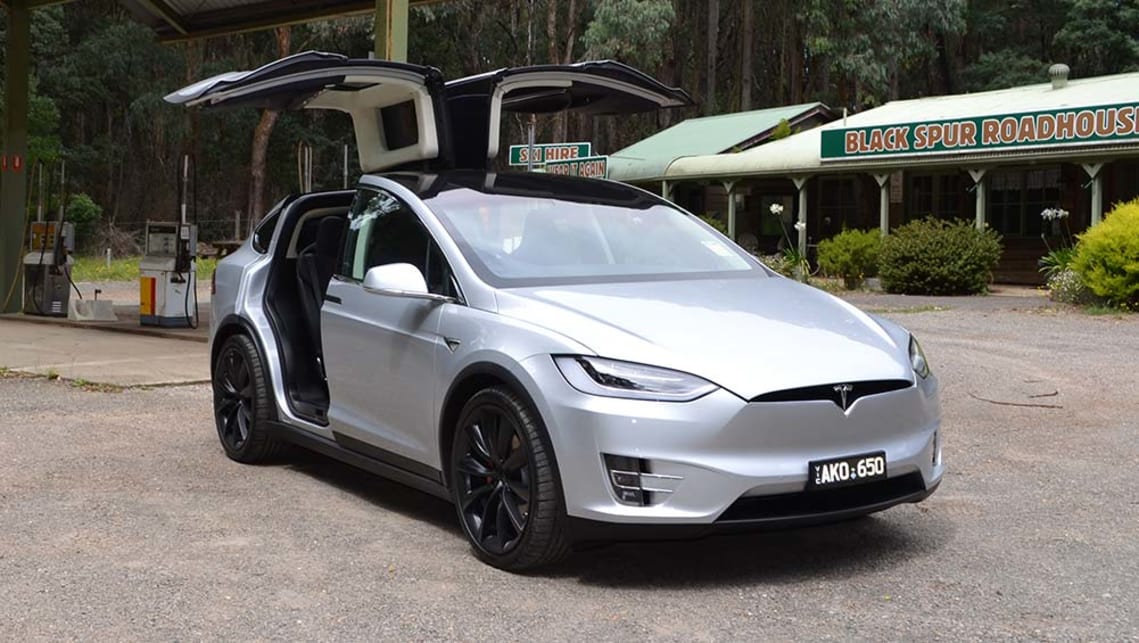 Richard Berry road tests and reviews the Tesla Model X SUV, with specs, energy consumption and verdict at its Australian launch in Victoria.

At some point Tesla need to come clean… and admit they’re aliens. That they’re the first fleet of colonists belonging to a super advanced civilisation from another planet.

How else are their vehicles so fast? How else can they travel so far on an electricity alone and then be charged so quickly? And how is it they’ve mastered fully autonomous technology while other car companies are just dabbling with experimental self-driving tech?

Okay, maybe not. But we were mighty impressed with the Model S when we reviewed it and now the Model X large SUV has arrived in Australia. Like the Model S the Model X is completely electric, and with a best 0-100km/h claim of 3.1s that doesn’t just make it the fastest accelerating SUV around, it’s actually one of the quickest cars on the planet.

So does this new gift from our alien overlords live up to the hype? Maybe it’s quick to 100km/h but does it handle like a block of cheese at the first corner? Is it a practical SUV? Does it tow? And what made me want to throw up? We found out by piloting the angriest one in the range – the P100D.

I'm pretty sure the designer who came up with the shape for the Model X was sitting at his computer and looked down at the mouse in his hand and said: "That's it! Now where are we having lunch?"

With coupe styling similar to BMW's X6 and Mercedes-Benz's GLE Coupe and with short overhangs like them too, the Model X is one sleek hunk of SUV. Actually at the time of writing the Model X is officially the most aerodynamic SUV on earth with a drag coefficient of 0.24, that makes it 0.01 slipperier than the Audi Q8 SUV Concept.

The Q8 will come as a fully electric SUV like the Model X, but the Benz GLE Coupe and BMW X6 run are powered by diesel and petrol only. The closest electric equivalent is the GLE 500e and the X5 xDrive 40e, but these are plug-in hybrids that still use petrol. The Model X is far closer in shape, size and spirit to the GLE Coupe and X6 - it's just that their electric versions haven't been born yet.

The Model X is just short of drop-dead gorgeous, just short because there are some elements which while they may make aerodynamic sense aren't that aesthetically pleasing. Sure electric cars don't need a grille, but its face is a bit plain without a mouth. The way the rear of the car ends abruptly like it's been sawn off reminds me of the Toyota Prius's bottom.

What makes it possible to overlook these not-so-pretty points are stunning design features such as the massive swept back windscreen, the wheel arches filled with giant 22-inch rims and those upward opening Falcon Wing doors.

Ground clearance ranges from 137-211mm, which is not bad for an SUV.

It may be an SUV but the Model X has all the Tesla hallmarks – from that window profile to the featureless face. The same goes for the cabin with its giant display, beautiful high-quality materials and stylish design.

Yes it's fast and electric but if you take the utility out of an SUV you're left with just a sports vehicle, right? So the Model X needs to be practical – and it is.

There are five seats as standard, but you can option six or seven seat layouts. The GLE coupe, the X6, even the Q8 (when it finally arrives) only have room for five. All are individual buckets seats in the Model X – two in the front, three in the second row and two more in the third in the case of the seven seater.

Now the real test. I'm 191cm tall, so apart from being refused entry onto some amusement park rides sitting behind my own driving position can be a challenge in various cars. In the Model X I fit but with about a thumb nail's gap – which is fine. Headroom is good because of the recessed windows in the Falcon Wing doors' which become the roof when closed.

The Falcon doors are clever, though, in that they can open in just 30cm of space either side of the vehicle.

The P100D we drove was optioned with seven seats. Back in the third row headroom is limited because of the roofline. Legroom is adjustable because the second row seat can slide forward but I couldn't sit behind myself. The third row really is for kids or Danny DeVito – entry though is excellent thanks to that sliding second row.

Storage is good with six cup holders (two in each row of seats), medium sized bottle holders in the front doors (the back doors don't because, gravity), a large centre console bin, and a glovebox.

There's no engine under the bonnet and so it becomes a front boot (a froot?). The combined luggage capacity of the froot and the back boot (with the third row folded) is 2180 litres.

All doors open automatically – the front ones and the rear Falcon wings. They are a bit slow and forcing them only makes them grind their motors angrily. They're a great party trick but if you're getting in and out frequently – as I was when doing the photo shoot, they become a hassle.

The Falcon doors are clever, though, in that they can open in just 30cm of space either side of the vehicle.

Yes the P100D we drove is $100K more than the entry car, but you do get some sweet standard features.  Things like the Ludicrous Speed Upgrade which drops the 0-100km/h time from 5.0 seconds to 3.1 seconds. There's the higher capacity battery for increased range and performance, plus the rear spoiler with three height settings. The Falcon wing doors are standard, too.

Other standard features found on each variant include the 17-inch touch screen, nine-speaker sound system with Bluetooth connectivity and front and rear parking sensors. Not counting the reversing camera the Model X also comes equipped with seven other cameras – these are for the Enhanced Autopilot self-driving option ($7500) which is currently being developed but will be rolled out soon according to Tesla.

Our test vehicle was also fitted with the optional Towing Package – yup you can tow with the Model X. It's braked towing capacity is 2500kg.

Our test car with all of its options was pushing the $300K mark.

There is no transmission in the traditional sense, just a single fixed ratio (1:8.28) gear. That means smooth, strong instantaneous oomph.

The P100D has a 100kWh battery pack which is stored under the floor. The NEDC official range for the P100d is 542km, but in reality Tesla says that your range on a full charge is about 100k less than that.

Piloting the Model X is like driving a high speed train.

Charging through one of Tesla's Supercharger stations will put 270km into the battery in 20 minutes, while the wall unit which comes free (you have to pay to install it) will top it up at 40km per hour. There's also a charging cable which will plug straight into your power point at home – it's a lot slower at about 10-15km per hour but fine as a last resort.

The Model X does not yet have an ANCAP rating, but all the signs are there that it is likely to easily score the maximum five stars. There's 12 airbags, AEB and when once the Enhanced Autopliot software is ready for download it will be fully autonomous, meaning it will drive you to where ever you need to go without you having to steer it – but check the regulations in your area before you get carried away with this, okay?

There were ISOFIX mounts and top tether points in all five of the back seats in our test car.

The Model X is covered by a four year/80,000km warranty, while the battery and drive unit has an eight year infinite kilometre warranty.

I've had a couple of brushes with car sickness in the past, but never as a driver – until now. So full-on is the Model X P100Ds acceleration and my need to drive every car like it's a rally stage that I managed to make myself a little bit... ahem queasy.

It's not so much car sick, as train sick because piloting the Model X is like driving a high speed train – you've got that instantaneous sledgehammer acceleration, you're seated fairly high and the view from the cockpit with the giant windscreen (the largest in production) is cinematic. The bonnet is short and dips away so much so that the base of the windscreen appears to be the front of the car. Combine this with almost total silence and the only indication that you're travelling at warp speed is what feels like a punch in the guts and the landscape rushing towards you.

How did it handle when it came to the first corner? Gobsmackingly well.

It's almost totally silent because there is a faraway hum of electric motors and I also picked up a bit of wind noise that seemed to come from around the rear doors. Apart from that the cabin is so well insulated there was next to no road noise.

How did it handle when it came to the first corner? Gobsmackingly well. The course wasn't an easy one either. Tesla had chosen the Black Spur – one of the best driving roads in Victoria that twists its way from Healesville to Marysville. I've driven it in everything from hot hatches to family sedans, but the Model X would be up there in proper sports car territory.

With the batteries running along the floor there's a low centre of mass and that goes a long way to reducing body roll and the air suspension not only gives the SUV a comfortable ride but great handling too.

Steering is on the heavier side, but it's quick and accurate.

Braking is almost not needed. As soon as you lift off the accelerator regenerative braking washes off speed quickly.

The driver's seat felt a bit tight around my legs - blame my height – but comfortable across my back - a bit on the firmer side through – some would say supportive.

While forward visibility is unrivalled, the small back window is hard to see through – the reversing camera is excellent, however.

The drive was only a short one, but in my 50km blast I used an average of 329Wh/km. The car wasn't fully charged when I set out and the gauge told me it had about 230km 'in the tank'. Upon returning there was just 138km left – but I was driving hard enough for me to make myself sick.

Hugely impressive all round – from its brutal acceleration to its practicality. It's expensive when optioned to the hilt, but this is a special car. I miss the noise of petrol engines, though and the drama which goes with it. Alien technology, then? Nope, more likely the future of human travel. Just make sure you have the stomach for it.

Would you pick a Model X over an X6 or GLE Coupe? Tell us what you think in the comments below.